Research Article
Psychological Intervention for Cognitive Restructuring in Adolescents with Asperger Syndrome
Context: Cognitive Restructuring as an Essential Part of Cognitive-Behavioral Therapy (CBT) is one of the most effective techniques of psychological intervention to alleviate the symptoms faced by adolescents with Asperger syndrome. The success of psychological intervention for cognitive restructuring in adolescents with Asperger syndrome depends largely on the identification of specific causes to distorted patterns of thinking and the application of techniques to alleviate negative symptoms (attitudes, behaviors and negative expectations, passivity and social withdrawal). In the study (a pilot study), we aimed to identify whether there is a relationship between the variables mentioned (how they can be influenced) and how strong this link is the study was performed on a single group of subjects (N = 10), with the measurement of the effect of the stimulus situation (psychological intervention) after the variable manifested its effect, following the presence of psycho-affective states or traits at a high level (anxiety, tension, depression, anger, aggression, excessive emotion) with negative consequences on self-image and limiting the possibilities of expression of the subject in interpersonal relationships. The aim of this study was to develop a model of psychological intervention focused on cognitive restructuring in adolescents with Asperger’s syndrome, allowing the creation of a specific application protocol, so that a high degree of effectiveness can be achieved in the shortest possible time.

The applied cognitive restructuring was a selective process (Ovide Fontaine, Philippe Fontaine, 2008), which did not aim at identifying and modifying all the beliefs that generated emotional and behavioral problems but only those that exacerbated and maintained the problematic situation - distorted (dysfunctional) thought patterns. Cognitive restructuring techniques were used. Among them (dispute techniques: empirical, logical and pragmatic, exploring the meaning of a situation, the technique of reassignment, examining alternatives and options, then catastrophe, reframing, Socratic dialogue, using paradoxes, scaling technique). Social skills were formed (absence of answers to questions - brainstorming possible answers, combination with cognitive restructuring, role play, assertiveness, inclusion in a group). The evolution of some psychic traits following the psychological intervention was represented by psychic profiles of adolescent patients with Asperger’s syndrome included in the study.
The analysis of the results obtained by periodic evaluations of the test - Psychic Status Profile (POMS), outlined a mental profile of adolescent patients with Asperger’s disorder included in the study compared to the ideal mental profile (“iceberg” model) in terms of emotional states. We noticed that the highest level of average scores obtained Figure 2 is the variable, tension - anxiety (T-A), characterized by a generalized state of discomfort, described by nervousness, tension, insecurity, agitation; Subjects obtained lower scores on the variable, vigor - activism (V-A), which means a state of activation characterized by malaise, low alertness and a decreased level of mental energy. The scores obtained for the variable, confusion - dismay (C-C), provided information about the subjects regarding the degree of awareness of their tasks in the activities carried out before which we diagnosed the analyzed mental states). The diagram of the mental state profile indicates the factors TA (tension-anxiety) and CC (confusion-dismay) with values much higher than the value considered average (T = 50 points), which shows that at the time of testing the subjects were not well enough balanced mentally (they had a high level of anxiety). The profile diagram of the mental states also indicates the factors DD (depression- depression) and OI (fatigue-inertia) as having values lower than the value considered average (T = 50 points), which shows that the researched subjects are characterized by a state that describes a low level of mental energy (fatigue, boredom, exhaustion) and personal inadequacy (discouragement, loneliness, devaluation). 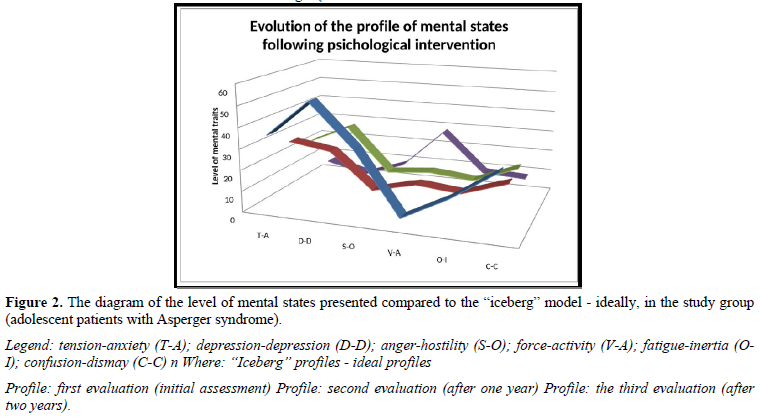