Fresh fruits and vegetables production is turning out quick and approaches to keep freshness during transportation, utilization and before consumption has been a major setback. Beside the post-harvest processing approaches, nutrient retention or loss is unavoidable; therefore, procedures to retard nutrient losses during storage are continually essential. The rate of senescence of vegetable and fruit after physiological detachment are quite high and there is need for a system that could humidify and retard the detached plant cells from the physiological state processes of the parent natural shoot system. The main methods of fruit preservation include; Modified Atmosphere Storage (MAS), Controlled Atmosphere Storage (CAS), use of preservatives and edible coatings. These principles of MA, CAS, preservatives and material coatings over time had been proven to effectively keep fresh fruits and certain vegetables safe for considerable days to months [1]. However, these approaches tend to be expensive and cannot be easily reached by rural homes and horticulturist. According to Thumula [2], small-scale handlers may encounter labour issues, unreliable electric power supply, lack of transport, storage facilities and packaging materials and other constraints; also economic of scale [2,3]. MAP perception is to control respiration and ethylene production to maintain vegetable and fruits of high organoleptic quality, but these processes depend on proper temperature and relative humidity management [2], which could be envisaged by hydroponic storage system. Similarly, Orede [4] had proven that cucumber and water melon could be preserved hydroponically but had not ascertain their nutritional retentions and microbial load during the period of hydroponic storage. Cucumber belongs to the family of Cucurbitaceae and had been familiarized to as vegetables as well as fruits [4]. Watermelon (Citrulluslanatus) is of the Cucurbitaceae family and as a member of the cucurbitaceae, watermelon is related to the cantaloupe, squash and pumpkin and other plants that grows on vines on the ground [4]. Studies suggest that increased consumption of fruits and vegetables decreases the risks of obesity, diabetes, coronary heart diseases; while promoting healthy complexes, increased energy and overall weight reduction [4,5]. An effective method of fruit preservation ought to retain the original nutritional and microbial load characteristic qualities of fruit as convenient and simple as possible, meeting the post-harvest requirements of small scales farmers.

A plastic storage structure of 0.05mm porosity was set up for these studies. 0.05N sodium Oxo chlorate solution in and 1.0N sodium Oxo chlorate solution water solution was made and a porous filtering rubber basket submerged in a bowel container for the cucumber and water melon storage chambers (Figure 1).
A tap water set up was used as a control. The top of the various chambers was covered with polyethylene covering films of 0.05mm porosity which serve to generate the modified atmosphere conditions. About 40kg and 70kg of Fresh cucumber vegetables and water melon fruits harvested from local farms were used respectively. The set up was made under room temperature (±34°c). This system set up was based as described by Orede and colleagues [4] (Figure 2). 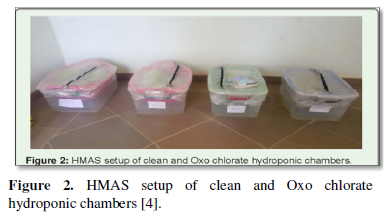 Reading from the RH meter and Co2 and O2   meters were simultaneous and after three days’ interval from the chambers. Oxygen meter (Model 803) and carbon dioxide logger (Co2/Tem/RH Data logger model No; 201707004365) were used in reading from the chamber. The meters were placed inside and immediately sealed up, left for 5-10 minutes before taking readings. Each reading is triplicates and mean values finally taken (Figure 1 & 2).
Determination of Vitamin C

Vitamin C was determined using the method described by AOAC [6]. 10g of the sample was weighed into 250ml flask and 50 ml acetone was filtered. The filtrate was measured and equal volume of saturated NaCl was added to wash the filtrate. The mixture was shaken then transferred to a separating funnel and the layer of the filtrate was removed. The upper layer was washed again with 100% Potassium trioxocarbonate (IV) (K2CO3), then separated and finally washed with about 10 - 20ml of distilled water. The absorbance was read in a spectrophotometer.

Carotene was determined using the AOAC method [6]. About 5g of the sample was transferred into a separating funnel and a solution containing 60ml of hexane, 40ml of ethanol and swirled vigorously after adding 2ml of 2% NaCl. This was then allowed to stand for 30 minutes after which the lower layer was runoff. The absorbance of the top layer was determined at a wave length 460mm using a spectrophotometer.
Total carotenoid (mg) =

The mineral elements such as Calcium, Potassium and phosphorus were determined using the method as described by AOAC [6]. One (1) gram of each sample was weighed into 100ml round bottom flask, and 5 ml of hydrochloric acid was added and heated over an electric heater in a fume chamber until the solution becomes colorless. Each of the solution was made up to 10ml mark with distilled water and the diluted sample set aside for further studies. The Calcium, Potassium, Sodium and phosphorus content were analyzed using the Atomic Absorption Spectrophotometer at specific wave length.

Microbiological and Antimicrobial analyses of the Juice

Microbiological analysis of the juice was done as described by Adegoke [7] to determine the total bacteria, yeast and mold counts. The cucumber and water melon were taken squashed serially diluted, samples were aseptically introduced into sterile petri dishes after which molten agar (about 45oc) was poured into them, mixed and allowed to set. The different agar plates were incubated under appropriate conditions. Nutrient Agar (NA) was used for the enumeration of total bacteria count in the samples and was incubated at 37oc for 24-48hrs, while Sabourd Dextrose Agar (SDA) was used for the enumeration of moulds and yeasts in the samples. The SDA plates were incubated at room temperature (28±2oC) for 3-5 days. After the incubation period, dishes were taken and colony count made in triplicates.

The water melon physiological characteristic relative humidity, oxygen, carbon dioxide and temperature content are shown in Table 1. The relative humidity ranging from 35- 58 %, in tap water, 2.5 ml sodium Oxo chlorate solution and 5ml sodium Oxo chlorate solution respectively, showed ranges similar with those of tomatoes broccoli fruits during MA and CA storage [2]. The temperature observed in the treatment fell within 28-40°C with constant oxygen concentration and varied carbon dioxide values from the readings. The storage period of three weeks was recorded for water melon at this gaseous exchange with semi permeable polyethylene membrane barrier.

The cucumber physiological characteristic of relative humidity, oxygen, carbon dioxide and temperature are shown in Table 2. The relative humidity ranging from 25-58 %, treatment normal water, 2.5ml and5ml sodium Oxo chlorate solution, showing range similar with those of tomatoes broccoli fruits during MA and CA storage. The temperature observed in the treatment fell within 29-40°C with constant oxygen concentration and varied carbon dioxide values from readings. The storage period of three weeks was recorded for cucumber at these gaseous exchanges with semi permeable polyethylene membrane.

The basic conditions during fresh vegetable and fruits transportation are proper temperature, humidity and adequate ventilation and as well as proper packaging. Table 1 & 2 vividly revealed the RH, temperature, oxygen and carbon dioxide concentrations respectively for water melon in the HPS. The RH observed was below recommended values for optimal shelf life of fruits and vegetables [8]. The values were far below 80-90% RH. This revealed that high respiration and loss of water may occurs, hence the propensity of perspiring, decay, with low mould growths in the chamber. The temperature values were low, suitable for horticultural fruits and vegetables. At such, respiration rate and metabolic losses are lowered.

Gas composition, such as oxygen, carbon dioxide, and ethylene, influences microbial decay and physiological respiration rate [9]. Reduction of oxygen and elevation of carbon dioxide through modified storage complements to maintaining low temperature through the postharvest value chain. The obvious low oxygen concentration and high carbon dioxide concentration in the chamber coincided with values from horticultural commodities recommended 1 & 5% of O2 and CO2 in a modified atmosphere for fruits and vegetables for both safety and quality [10,11]. Conferring to Lee [11] Co2 can inhibit ethylene action as well as autocatalytic production of ethylene by climacteric products of apples and tomatoes.

Figure 3 above revealed vitamin A&C contents of water melon and cucumber in HPS. The obvious reason for high content of vitamin A in water melon than cucumber might be due to differs of fruits, sources and horticultural diversity. Vitamin C were low for water melon compared to cucumber fruit except for treated sample with 5 ml HOCL solution. This high value observed with sample AB could be due to high humidity and osmotic pull of vitamin C from water melon matrices cell and the surface area of water melon during HPS [2]. The low temperature generally had a great deal of contribution to slow labiality of vitamin A&C during the storage period.
Figure 4 above showed mineral contents of water melon and cucumber fruits in hydroponic storage. The sodium content for both water melon and cucumber had low or traceable values. This observation may be due to use of mineral sodium for metabolic process after detachment, similar with cellulose and hemicellulose degradation by enzymes [2]. Conversely, the potassium content of water melon showed low values at fresh harvest (control) and at 5ml sodium Oxo chlorate solutions respectively. Dissimilar high same values were observed with stored water melon stored hydroponically in tap water and of 2.5 ml sodium Oxo chlorate solution. This observation may be due to material utilization during storage and mineral potassium favored at moderate Oxo chlorate concentration treatment. Phosphorus content was low at 2.5 ml sodium Oxo chlorate solution, but high with control, tap water treatment and 5ml sodium Oxo chlorate solution. The cucumber chamber showed a dovetailing value as concentration of Oxo chlorates increases. Control sample had high values of potassium mineral while 5ml of Oxo chlorate had the lowest value. The values for phosphorus went in contrasting directions. Values were lowest at control then increased and became stable from tap water hydroponically stored cucumber. This variation may be due to Oxo chlorate concentration, humidity effect, respiration quotient excipient from the chamber, fruits types, metabolic variation and periodic position of mineral elements on the periodic table. According to Kader [3], Talukder [12] and Kitinoja [13] utilizing improved post-harvest practices often results in reduced food losses, improved overall quality and food safety, and higher profits for growers and marketers.

The rate of respiration of a fruit or vegetable is inversely proportional to the shelf life of the product; a higher rate decreases shelf life [11,15].

The creation of hydroponic chambers to prolong the shelf stay of perishable fruit such as water melon and cucumber are possible. These could be used to extend the post-harvest stay of vegetables and or fruits. The results revealed that nutrient retention in hydroponically stored fruits could retain as much nutrients and increased food safety.
Download PDF View PDF