Research Article
STATUS OF WEAKER SECTION OF SOCIETY WITH SPECIAL REFERENCE TO ASSAM
Assam is a land of various ethnic & indigenous tribes and subtribes. Generally, scheduled cast and scheduled tribe people are considered as socially weaker section in Assam. Because they follow distinct culture & their living condition is also unique. Most of the tribal people live in hilly region with limited population. They are characterized as less developed limited aspirant and less aware section of the society. But they are contributing significantly in making Assam a place, of unity in diversity. The actual identity of Assam lies with those backward section of the society. Unfortunately, they are facing a threat like situation of losing their identity, culture and language due to different government policy at present. This paper aims to explore the status of such weaker section of society in terms of education, gender equality and other variables with some sort of secondary data.

Keywords: Assam, Weaker section, Society, Scheduled cast and scheduled tribes.
The five figures of one hand are not equal, like this in every society all the people are not equal in terms of status. Generally low status is associated with the lower caste people. In earlier period, the lower caste people were ill-treated, and miss behaved by upper caste people in many societies, so their condition in terms of education, economy and in other social indicator is not much developed due to exploitation (Bhadre, 1990). In a study of a village of Cacher district of Assam it is found that ethnocentrism and social exclusion towards dalits and minorities is still there in the study area. It is because in the mindset of particularly Brahmin people ethnocentric mentality for Castesim is still surviving (Giucppoe, 2008; Mahmudul, 2018). In this study, I have attempted to study the status of weaker section of the people of Assam on the basis of taking some specific Area, where weaker section of society like scheduled caste, scheduled tribes and other backward class are major in number, and comparison is done with some specific indicator.

The most unique feature of India is its status of having ‘unity in diversity’ and Assam is also focused in that principle feature strictly. Perhaps for that reason, among all the northeastern states, except some area covered by NEFA, Assam treats this principle as slogan. My intention is not of saying that other states of northeast are not following the principle. But my viewpoint is related to some specific point. But the main point is that the status of all the people living in either

India or in Assam is not same. Indian society still has to a long walk towards egalitarian society. In Assam also egalitarian social condition is not achieved because of the caste-oriented socialism, the caste stratification inherently visible in Assam (Thakur, 1992). Most of the study of demography and social sciences explains a comprehensive outlook towards the caste system inherited in India from traditional class-based system. Such sections of society are termed as weaker sections, which are poverty driven, marginal and informal worker with insecurity of tenure and has lower living status in terms of health and education Bhadra (KR, 1990). Weaker section of society is identified by the caste of the people and the scheduled caste, scheduled tribes and backward classes are considered as weaker section of the society (Chandan, 1989). In ancient Society, the caste system was highly dependent on the occupation of the people (Mahmudul, 2018). The new generation of the highly influential family or caste was given high respect and vice versa. Occupationally, priests, who does worship was categorized as the highest caste, following this the Shatriyas or fighters are next high class and thus, businessmen were treated with lower status and the people who did small works are treated with the lowest status. So, there were four castes Brahmin, Shatriya, Bashya and Sudra respectively. Accordingly, in due course of time, the upper caste people were much developed in terms of education, living, standard than most of the upper caste people (Bhatnagar, 1972).

AREA OF THE STUDY

The study is particularly concentrated to some specific districts of Assam, where the concentration of tribal population is more (Bhakta, 1986). The districts like Karbianglong, Kokhrajhar, Dhemaji, Lakimpur and Udalguri etc, in the hilly region the concentration of scheduled tribe people is more (Deka, 2016). Education, health and gender equality are taken as indicator to study the status of the population and compared with the general average.

The study is descriptive in nature, which follows a qualitative analysis of data that has been carried out with the help of existing literatures. The study is a discussion that has been conducted with the help of secondary data collected from various journals, reports, census, research paper and the Google scholar. Sample districts are purposively collected considering the majority of the population. The data are primary collected from census of India, 2011.

OBJECTIVE OF THE STUDY

A significant portion of the people in Assam is educationally and socially backward (Bhakta, 1986). Due to the byproduct of the Hindu caste driven social system in India, social inequality is existing in India (Chandan, 1989). As the upper caste educated and high-income people with their practices used to exploit the low-income earner, illiterate people, belonged to weaker section of the people. So, the status of weaker section is lower compared to the general people (Bhatnagar, 1972).

But the situation is totally changed at present. Due to effort of different social reformer and of course one among is B.R. Ambedkar, who, for the first time suggested for some special reservation for benefit such weaker section of the in terms of education, politics, economics etc. in the constitution of India (Agarwal, 2005 & S.b., 1985). After independence, the principle of Indian constitution like equality, democracy, freedom, secular etc. provides much security to all the sections of the India and Assam (Bhakta, 1986). The development of education, economy, and moral of the people of India caused much change in their thinking and now all the people are treated more or less equally (Chaube, 1994 & SK., 2000). 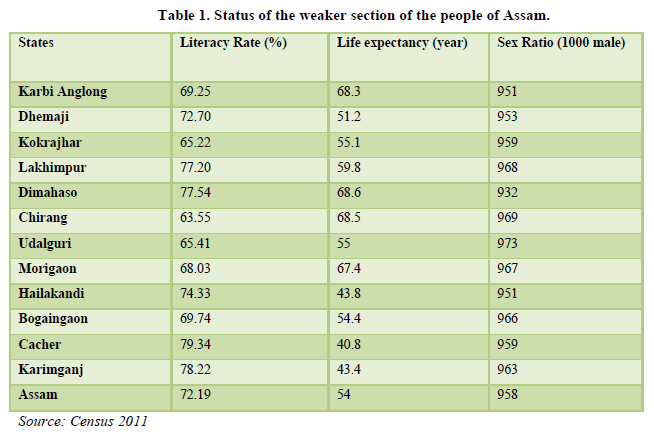 In Table 1, literacy rate is taken as an indicator of education, life expectancy for health and sex ratio for gender. The districts like Karbri Anglong (55.69%), Dhemaji (47.23%), Kokhrajhar (33.67%), Lakhimpur (23.5 %), Udalguri, Chirang, Dima hasao etc tribal people are concentrated. Again, in the district like Morigaon, Cacher, Bogaingaon, Hailakandi, and Karimganj etc the scheduled caste and backward caste people are mostly concentrated (BC, 1905).
To satisfy the second objective, the data relating to the overall of the average of Assam in the same indicator or social condition is collected and comparison is done.

In case of education or literacy rate, except Dhemaji and Lakhimpur all the other districts having majority of the scheduled tribe and scheduled caste people, the literacy rate is below the regional average i.e. 72.19%. Hailakandi, Cacher and Karimganj, are some districts which are taken for the comparison, and we can see that these districts are much better in terms of education. The lower level of literacy rate may be attributed for the reason of lacking in awareness among the weaker section of society (Agarwal, 2000).

The table clearly shows that except Dhemaji all the districts having concentration of tribal people or so-called weaker sections of the society, the life expectancy at birth, showing the status of health is above than total average age of 54 year according to 2011 census. On the other hand, the other districts which are used for comparison like Karimganj, Cacher and Hailakandi, the situation is reverse. The higher health status is attributed to their consumption pattern and climatic conditions, as those people generally placed in the hilly area with favorable climatic conditions.

Gender gap shows the existing inequality in terms of sex, which is an important indicator of development or status of any society or region. In case of gender gap, Dhemaji and Karbi Anglong falls behind the national average of Assam of 958 per 1000 live birth (male), other such area is slightly better. Dima Hasao has the highest gender gap i.e. 932 per 1000 male child only. And other districts, except Hailakandi, used for comparison have satisfactory sex ratio, which is above the average. Sex ratio is significantly sensitive to literacy or education level, and as education level is not much higher in case of those districts having weaker section of the society, so sex ratio is also is not so much satisfactory (Mathur, 1992).

The determination of the status of any section of the society is not at all an easy task. Status is a very broad term, which includes all round (social, economical, environmental, educational, moral, and psychological) aspects. The quantification of that qualitative subject is not possible. Besides there are many factors, which may influence the indicators which are used to determine the status. Here though I have taken three indicators, but among the three indicators there are many intervening factors like religious believe, heredity, previous status, mentality of the people etc. Again, ‘society’ is a collective term, so difference is a common case. Moreover, the status itself may be classified from different perspectives. Like the caste, income, religion, occupation, natural calamity proneness etc may be the basis for classification of the people in the society.

From this study, it is seen that weaker section of the society (in terms of caste) in Assam are weak in education and empower of women than the general section of people living in Assam. But in case of health, their status is much better due to various climatic and environmental factors (Agnihotri, 1991; Bhakta, 1986).

But at present, in Assam, the people belong to the tea tribes are more backward in many of the indicators and Assam government is much concern regarding this & doing much for upliftment for their condition of living.
Download PDF View PDF