Foreign-owned subsidiary firms generate revenues domestically. Some will not only sell within the U.S. but will become exporters. For example, FDI contributed $379.2 billion to the U.S. goods exports in 2016 (Figure 1). 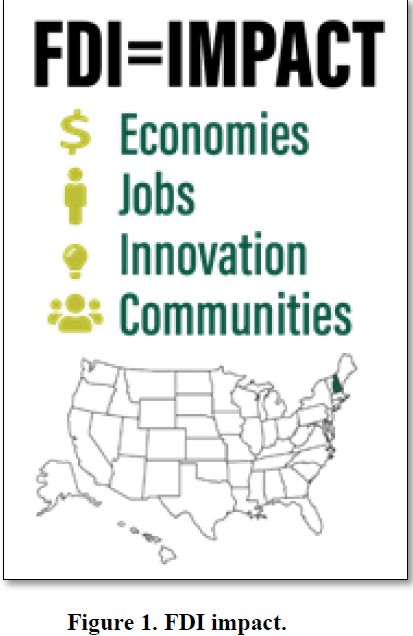 At the state level, similar patterns and impact occur. Foreign companies invest and reinvest in operations, people, and innovation. These firms grow and influence local communities. The direct impact on state economies is significant and long-lasting. FDI results in job creation, expanding markets, and greater local and country-wide economies. An increased appreciation of FDI impact on local economies has led to greater awareness and outreach to foreign firms by state governments (Wu & Rogers, 2018). New Hampshire is home to hundreds of foreign-owned subsidiaries; cultivating an environment attractive to foreign investors.
DESCRIPTION OF THE NEW HAMPSHIRE FDI DATA

The power of FDI to expand and strengthen economies is significant. State governments are organizing to identify, capture, and support FDI in different ways. Some states do not separate FDI initiatives from domestic business development practices. Other states utilize their own specialized FDI recruiting team to reach out to potential foreign investors or have their own overseas representatives (or offices) in other countries for trade and FDI promotion purposes. Although New Hampshire’s organization around FDI is less formal, FDI is a noteworthy element of the state’s development strategy.
NEW HAMPSHIRE FDI STATUS

Foreign direct investment is an essential aspect of New Hampshire’s economy. As is the case for countries, sustaining and elevating FDI is critical for the economic development of a state and, more specifically, for localities in a state. While not a top destination of direct investments as compared to other states, New Hampshire benefits from the diversity of FDI, with patterns of activity that match and support overall economic progress.
FDI is a dynamic and active part of the state’s economy: 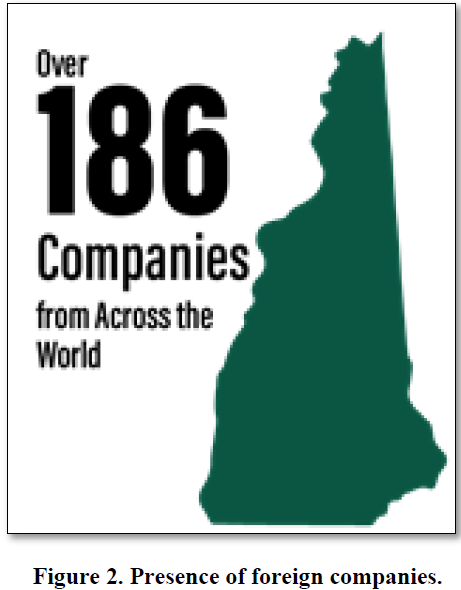 The data produced by Plymouth State University researchers provides unique insight and understanding of New Hampshire FDI, how it manifests, and how it contributes to employment throughout the state. The research also indicates areas of high potential for FDI in terms of country-of-origin, employment, and overall value to the state’s economy.

Our research explores the potential for FDI development in New Hampshire. The research answers three questions critical for understanding the future role that FDI can play in the state:

We address each question by using original indexes that allow us to create rankings of countries by propensity to invest, potential to expand employment and potential to create value.

The Propensity to Invest in the State (Figure 3)

The first question concerns the prospects of where FDI might originate. Our approach indicates Germany is the most likely country-of-origin for FDI in New Hampshire, followed by Canada. 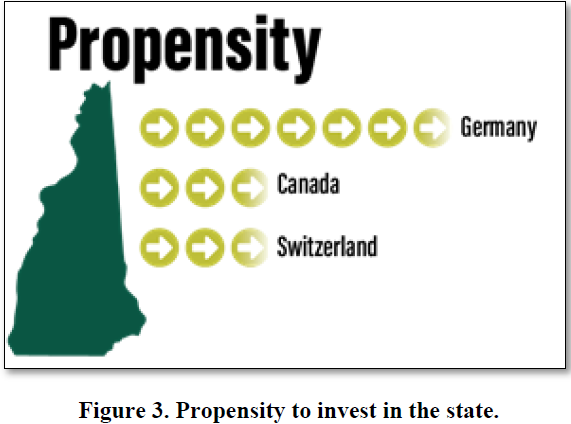 As one of the top manufacturers in the state, German companies already have significant operations within the state, employing many New Hampshire residents. German businesses appear to have a predilection for bringing medium to large scale subsidiaries to the state. Canada has a relatively strong presence in the state, with focus in some industries and higher industry and size diversity overall. The continued high potential of Canadian companies to locate in New Hampshire is likely supported by geographic and cultural proximity, as well as the infrastructure connection, such as roads, trade policy, etc. Our research also indicates that interest from European companies will continue to be strong. Japan is the only Asian country-of-origin among the top ten rankings of propensity to invest, with more room for exploring further development.
Expanding Employment in New Hampshire
FDI will continue to be a valuable contributor to jobs in New Hampshire. Our research explores the number of state workers that could be hired by foreign subsidiaries from each country in the future (Figure 4).

Once again, Germany leads the category.  German subsidiaries have already created over 2,200 jobs in New Hampshire. Our findings indicate that firms from Germany have the potential to bring the most jobs to the state in the future. Companies from France, Canada, and Japan also hold high potential for employing New Hampshire residents.

Germany and Canada are FDI countries-of-origin for most potential value, followed by France, Japan, and the United Kingdom. The predominance of European countries is not surprising. 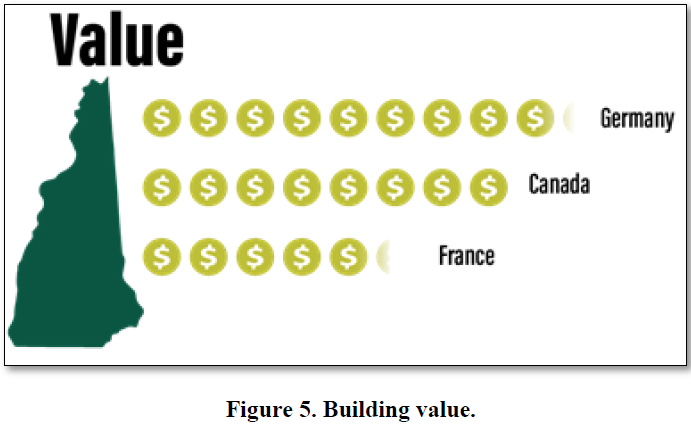 New Hampshire FDI is characterized by a relative diversity of activities. Foreign businesses contribute to a varied economic landscape, with growing employment and easy integration among industry and supply chain partners. Some agglomeration of foreign subsidiaries in the southern part of the state suggests possibilities for a growing ecosystem of companies, nonprofits, and education institutions. The potential for further growth can also be seen in the presence of small-size foreign subsidiaries that employ between 49 and 250 residents.  These small-to-midsize firms represent opportunities for rapid growth (Morrison et al, 2003). Foreign companies continue to establish operations in the state, and existing foreign subsidiaries are continuing to invest in the New Hampshire economy.

Diverse and Friendly Foreign Business Environment
The presence of foreign businesses in many industries contributes to a varied and welcoming business environment in the state. Domestic and foreign firms are likely to find home-based or international partners in most industries and sectors. New Hampshire foreign subsidiaries engage in all supply chain activities. The fact that 44% and 35% of foreign firms in New Hampshire are service providers and distributors, respectively, indicates New Hampshire is a promising market for worldwide companies to discover business opportunities with the upper-stream suppliers, partners and the down-stream clients in the state.

Geographic Clustering
The level and composition of FDI presence vary across New Hampshire counties, with a decreasing pattern from north to south, and from east to west. The distribution of FDI across counties reveals a notable geographic cluster of foreign firms in the Nashua-Manchester-Portsmouth economic delta along the New Hampshire-Massachusetts border with agglomeration spillover towards the inner center of the state. There are potential opportunities for spillovers of foreign investment from the south further to the north. Potential to grow foreign business presence in the less FDI-represented northern region of the state is also optimistic. It is worth noting that, even Sullivan County, the least FDI-represented county, attracts FDI from a total of seven countries in Europe and Canada. Hillsborough and Rockingham not only have the highest numbers of foreign firms but also the highest numbers of high-tech foreign firms. The two counties may have the potential to become a high-tech competitive cluster (Figure 6).

A Predominance of Small Foreign Businesses
Most foreign subsidiaries in New Hampshire are local operations with fewer than 50 employees. Almost half of the foreign subsidiaries are very small, with fewer than 10 employees. Regardless of size, foreign businesses appear to have a strong foundation in the state. Large foreign firms bring a significant contribution to employment in New Hampshire. Most smaller organizations are likely to champion supply chains and lead in economic and social contributions. Small foreign firms add diversity and may contribute to the overall entrepreneurial disposition. The small size of foreign firms is in line with the overall small business profile of the state. The US Small Business Administration notes that about 96% of New Hampshire businesses are small.
A Trend of Growth
New Hampshire activities of foreign businesses include leadership and human capital investments or interventions as well as expansion. Data for the past two decades show an increase in the amount and variety of foreign business activity, with expansion as a common objective. Beyond direct investment, foreign companies have placed important focus on innovation within and outside of the state. New Hampshire is the beneficiary of Research & Development spillovers from neighboring states. Large projects in the state often drive and focus the actions of foreign companies. Historically, utilities and finance have been key sectors of foreign business activities, with many developments involving information technology (Figure 7). 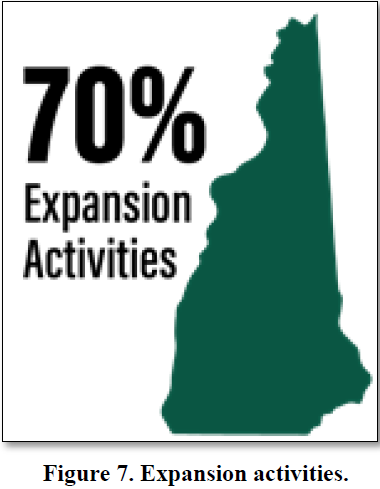 Foreign companies operating in New Hampshire have engaged in expansionary activities and collaborations with local or U.S. domestic partners, with an increase in intensity in the second half of each of the past two decades. In 2017, New Hampshire foreign business activity almost doubled as compared to the past years with the highest activity.

Growth has been a typical pattern of foreign activity. Acquisitions of local or foreign subsidiaries have been an important development mode in New Hampshire. In some instances, development in the state has been the outcome of a larger acquisition of a U.S.-based firm. Many New Hampshire foreign companies continue to invest in local operations. Expansion activities often involve contracts to sell, distribute, and manufacture in New Hampshire, as well as partnerships to access local markets. Border effects appear to be important. Canadian organizations represent over thirty percent of foreign companies involved in business activities in New Hampshire in the past two decades.

Our research indicates New Hampshire’s business environment can continue to provide a number of catalysts for FDI growth and foreign business activity expansion: staple projects, strong sector-focused presence, high economic integration potential in supply chains, re-investments, and investments in partnerships supporting the expansion of local business. Potential for more opportunities exists in increasing the networking among and with foreign direct investors and through mapping the FDI journey, with the goals to not only understand the needs of the foreign companies but also to maximize the likelihood these companies will invest and thrive.

Researchers from Plymouth State University, in cooperation with the New Hampshire State Department of Business and Economic Affairs, has been investigating FDI throughout the state. The collective data and ongoing findings are available at https://campus.plymouth.edu/nh-globalization/.

[i]US Bureau of Economic Analysis (BEA). Foreign Direct Investment Position in the United States on a Historical-Cost Basis, 1997-2018. The compound annual growth rate was calculated by the authors.

[iii] BEA. Foreign Direct Investment in the U.S., All U.S. Affiliates (data for 2007 and forward), Compensation of Employees, 2007-2016. The compound annual growth rate was calculated by the authors.