Research Article
Spinal Tuberculosis - Presentation, Management and Outcome. Experiences from A Tertiary Care Neurosurgical Institution in South India
Introduction: Spinal tubercular infection is a common cause of infective kyphosis and paraparesis in India leading to devastating socioeconomic consequences. We therefore wished to evaluate the outcome of decompression and transpedicular screw fixation in the management of tuberculosis of the thoracolumbar spine.

Materials and Methods: An observational follow-up study. A total no. of 46 patients aged between 19-72 years and both sexes (Male-61%) was included in the study. Patients diagnosed as tuberculosis of the thoraco-lumbar spine were operated by direct decompression, transpedicular screw fixation and fusion with bone graft and mesh cage in some cases. Surgical procedures varied as per the requirement of the case, with 2 patients just undergoing decompression without bony fusion.

Results: This study shows 61% were male. Lesion 63% were dorsal, 23.9% were Lumbar. 52.2% were ASIA grade C, 21.7% were ASIA grade D, in preoperative stage, and they showed significant improvement post-surgery, where 61.90% were ASIA grade E, 33.33% were ASIA grade D and 4.76% were ASIA grade B. The difference was statistically significant (P<0.001). Four-fifths (80.95) of the patients had excellent outcome followed by 14.29% good outcome, 4.76% fair and 0% poor outcome. Serial ESR levels also monitored over 6 months showed reduction in inflammation after surgery and regular antituberculosis therapy.

Conclusions: A proper person to person approach with emphasis on decompression, stabilization and rehabilitation with adequate drug therapy can lead to excellent results.

Keywords: Spinal tuberculosis, Cold abscess, Spinal stabilization, Laminectomy, Antituberculosis therapy (ATT)
INTRODUCTION
Tuberculosis (TB) is caused by Mycobacterium tuberculosis, and is one of the oldest diseases in the world. It has been described in almost all ancient civilizations, and tuberculous bacilli has even been found in prehistoric skeletal remains [1-5].
“To attend to a distemper from its beginning through a long and painful course, to its last fatal period, without even a hope of being able to do anything which shall be really serviceable, is of all tasks the most unpleasant” (Sir Percival Pott, 1779).
Although Dr. Pott is credited with this early grim description of spondylitis, tuberculosis as a disease has afflicted humans since the dawn of time. In the Sanskrit writings of ancient India, numerous references to tuberculosis under the eponym “Yakshma” are replete in the Rig, Atharva Vedas (3500 to 1800 BC) and Susruta Samhitas (1000 to 600 BC). It is humbling to note that the Vedic physicians’ prescription of high altitude, fresh air, rest, immobilization and constitutional supplementation was the same as that used by “modern” Western doctors until the 1940s [4-9].
Spinal TB occurs in fewer than 1% of patients with TB. Vertebral TB is the most common form of skeletal TB and accounts for 50% of all cases of skeletal TB. (5,6) Spinal tuberculosis is the result of hematogenous dissemination from a primary focus. The infection reaches the skeletal system through vascular channels, generally the arteries, as a result of bacillaemia, or rarely in the axial skeleton through Batson’s plexus of veins [6-8]. The infection spreads to the adjacent vertebral bodies under the longitudinal ligaments. The most common site is the thoracolumbar junction, but any segment of the spine can be involved; nevertheless, TB of the cervical region accounts for 10% of all cases of spinal TB. Atlantoaxial junctions are the least common sites for presentation of spinal TB, accounting for just 1% of all cases [9-13].
Pain is the most common presenting manifestation. However, the limited symptoms and absence of specific radiological changes early in the course of the infection often result in diagnostic delay. Computed tomography (CT) and magnetic resonance imaging (MRI) are valuable diagnostic tools. Confirmation of the diagnosis is obtained by identification of the tubercle bacillus in respiratory specimens and/or in samples obtained by abscess aspiration or bone biopsy [14,15]. Neurological complications are the most crippling complications of spinal TB with incidences ranging from 10 to 43% in various reports [15].
Anti-tuberculous drugs changed the patients’ fate. It was soon realized that the specific chemotherapeutic agents alone could cure not only active tuberculosis but it also helped in the recovery from paralysis. Anti-tuberculous drugs also made the surgery safer [16]. Before the advent of chemotherapy in 1994, treatment was basically bed rest, but after the treatment with chemotherapy and surgery the outcome began to improve Surgical treatment is considered in cases of severe spinal instability or progressive neurological symptoms with evidence of cord compression or deformation [15,16]. Since the advanced imaging modalities and different treatment protocols are developed during these years and drug resistance mandates applying innovative strategies to treat this serious disease, new reviews are always required to assess modern diagnostic modalities and treatment options [17].
MATERIALS AND METHODS
A total of 382 case reports of spinal stabilization were investigated and 46 patients were confirmed with Tuberculosis (TB) of spine (12.04%). The study period was from January 2011 to December 2018. The Inclusion criteria was all spinal tuberculosis patients with either compression on the neural elements, instability or both. All instability or compression patients without tuberculosis were excluded from the study. These patients were retrospectively analyzed for demographic data, segments affected, and presenting features as well as operative procedure performed and outcome. All features were then tabulated and analyzed for common threads and discernible inputs.
RESULTS
The results of data analysis are presented in the categories mentioned below. Relevant data points have been highlighted specifically.
Demographics
Of all the patients operated for spinal stabilization, most were for traumatic spinal injury with instability (64% or 246). Spondylolisthesis secondary to degenerative spinal disease formed the next most common category (23.5% or 90). Spinal TB was third (12.04% or 46) There were 28 males and only 18 female patients. Most of the patients were in the 41-50-year age group while almost no patients were present above the age of 60 years (Figure 1). 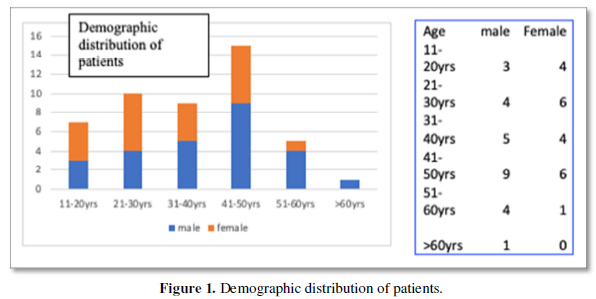 Most patients presented with pain and weakness of their lower limbs. 32.6% of patients had sensory symptoms of the limbs such as para-anesthesia and anesthesia. 30% had bowel and bladder involvement prior to surgery. The majority of patients (60%) had no fever or malaise (Figure 2).

On Examination, clinical signs were different ranging from swelling and deformity of the spine (gibbus) (52%), tenderness (almost all patients), paraspinal abscess and collection (39.13%), lower limb weakness (present in all but 6 patients), and sensory deficits (almost 50% of patients) as shown in Figure 3. 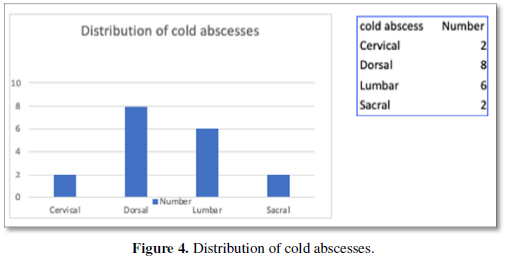 The presence of Motor deficit was the most important factor in deciding on whether surgery was to be performed or not as it emphasized the prognosis and function status of the patient viz-a-viz surgery. 6 patients didn’t have any deficit. However, 4 patients had severe quadriparesis and 6 were complete paraplegics (Figure 5). 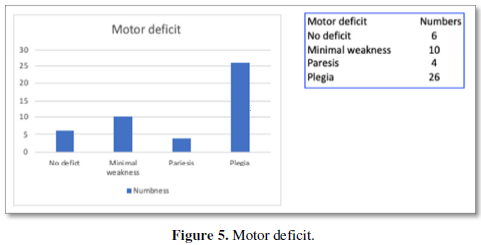 The definitive diagnosis and planning for surgery was made with radiological investigations. Of the 46 patients with TB, 12 showed wedging and collapse of vertebral bodies on Xray and 14 showed features suggestive of cold abscess. The final diagnosis was reserved for CT and MRI of the spine. Cord compression was noted in 42 patients while paraspinal collection was seen in 18 patients. Ct was done to demonstrate the bony destruction associated with long standing TB. The distribution of the disease was also characteristic with the majority in the thoracic and lumbar regions, as shown in Figure 6.

All 46 patients underwent spinal stabilization with decompression of the spinal canal. Implants with bone grafts were used as well to augment the stabilization and fusion. Specific surgical situations are described as follows.

1 patient had an Odontoid fracture with a cold abscess around the C1 C2 joint. The patient underwent an occipito-cervical fusion using contour rods and bone grafting coupled with craniovertebral junction decompression and drainage of cold abscess. However due to significant anterior compression persisting, he underwent a transpolar odontoidectomy with anterior decompression.

6 patients had stabile spines just requiring decompression. No fusion was performed in them.

13 patients were fused posteriorly alone with canal decompression and abscess drainage in the lumbar region.

15 patients underwent thoracotomies with anterolateral fusion with mono-axial screws and rods to the vertebral bodies coupled with debridement of the phlegm on and decompression of the cord.

No neurological worsening was noted after surgery. No implant breakage or malalignment was seen.

Ranged from 1 week (in patients without stabilization) to 4 weeks (in patients requiring thoracotomy and chest tubes).

Patients were ambulated in the first week itself on a Zimmer frame with either a thoraco-lumbar brace or a lumbar corset. Early mobilization aided in reduction of pain and early return to functionality. Patients with paraplegia were ambulated on wheelchairs after 4 weeks.

Anti TB therapy of 5 drugs was given for 18 months regularly. 6 patients were given extended therapy for 24 months, due to extensive disease on recommendation of experts.

Outcome has been measured in 2 ways: as per neurological improvement of the patient coupled with the reduction in inflammatory markers signifying reduction of disease intensity.

All patients improved after 6 months of continuous physiotherapy. On follow up 4 out of 6 paraplegics had complete neurological recovery and were ambulant with minimal support. The ASIA grading of outcome is shown in Figure 7 while, ESR reduction was gradually noted in most patients. The gradual reduction is shown in Figure 8.

Tuberculosis of spine has had a storied history in India with extensive documentation in both surgical and bacteriological perspectives [16,17]. Hence, we present our data in comparison with the latest established dictums of spinal surgery and bacteriology to elucidate the authenticity of our work as well as offer explanations regarding deviations from the established norm.

Our study showed a 61% of males involved with the maximum age group being between 41-50-year age group (33%) In a similar study by Park et al in Korea in 2007, maximum mean age of 41.5 years comparable with our values [18-20]. Most studies had the majority of patients presenting to the clinic with pain. Few had weakness of limbs which varied significantly between socioeconomic groups and nationalities. We however had a massive 91% of neurological weakness. The reason for our high levels of motor weakness is possibly that our patients come from low socioeconomic backgrounds and hence present late with severe symptoms [21-23]. For the same reason or study also had a very high incidence of bowel and bladder dysfunction (32.6%).

The dorsal and lumbar segments were involved in the majority of patients as is with other international case series, probably due to the watershed phenomena in vascular supply affecting these segments of the spine predominantly [23,24]. Most patients in our study had 2 vertebrae involved on either side of the affected disc space (56.5%) which is also in line with international data. The involvement of so mites in hematogenous spread of the disease allows for a disc space and its adjacent vertebrae to be fed together, thereby affecting the same segments pathologically as well [25]. 39% of our patients had visible swellings on their backs which is greater than comparable published data. However due to our patients coming late for surgery, the data isn’t remarkable in itself. Kyphosis was also seen in 52.17% due to the same reason.

Outcomes were good despite the serious presentation of patients. Udwadia [25] demonstrates a recovery rate of 92% with 74% improving from non-ambulatory to ambulatory status [23-27]. As shown in Figure 7, ASIA grades of the patients when compared from pre-op to post op showed excellent improvements. As mentioned earlier, 4 of the 6 paraplegic patients were ambulatory post rehabilitation.

Surgical procedures employed were standard, with emphasis on cord decompression with stabilization to ensure early mobilization and optimal recovery. Deformity correction when applicable was also done as mentioned above. Transpedicular instrumentation systems have distinct advantages such as rigid segmental fixation, stabilization of the three columns of the spine, least failure at bone metal interface, early post-operative mobilization with efficient nursing care and least complications in the management of tuberculosis of the thoraco-lumbar spine [26,27].

All patients had 18 months of antituberculosis therapy as per category 3 revised national TB control programme (RNTCP) guidelines in India. All patients were also registered with the National Tuberculosis Registry and monitored for drug compliance to ensure optimal bacteriological clearance. Some patients were given extended regimens based on individual requirements and expert opinion.

Although the prevalent impression of TB spine presents a picture of despondency and negativity, judicious use of appropriate surgery and aggressive physiotherapy, presents a viable option towards good recovery and return to functionality.  Emphasis on early detection, prompt decompression, stabilization along with antituberculosis therapy must be made to ensure optimum results to all affected.