Research Article
Intracranial Empyema: Experience of the Neurosurgery Department of Conakry University Hospital
Introduction: Intracranial empyema’s are the rare intracranial suppurations but serious and potentially fatal prognosis in the absence of adequate treatment. The objective of our study was to determine the epidemiological, clinical, paraclinical, therapeutic and evolutionary characteristics of these suppurations in our department.

Materials and methods: This were a descriptive retrospective study of 88 intracranial empyema’s files collected over a period of 5 years (January 2014-December 2018) in the archives of the neurosurgery department of Conakry University Hospital.

Results: The frequency was 43.1% for all intracranial suppurations. The mean age was 14.6 years (2-42 years) with a sex ratio of 1.8 (57 males/31 females). The entrance door was dominated by otorhinolaryngological infections, 76.5% and unknown in 19%. The clinical manifestations were dominated by fever (90%), intracranial hypertension (66%) and focal signs (45%). The site was subdural in 59 cases and extradural in 29 cases. Surgical treatment involved 91% of patients and 9% were treated with antibiotic therapy alone. The evolution was favorable in 68.1% of cases with a mortality rate of 13.6%.

Conclusion: Intracranial empyema’s are the medical and surgical emergency. The forms of otorhinolaryngology origin are more frequent. Despite the therapeutic difficulties, the prognosis remains acceptable in our study with 13.6% of deaths.

Intracranial empyema’s are the suppurations collected extracerebral (extra or subdural) [1]. They are rare intracranial suppurations (ICS), but have a serious and potentially fatal prognosis in the absence of adequate treatment [2]. In developing countries of the South, particularly in Black Africa, empyema remains a current problem [3]. In terms of diagnosis, modern imaging techniques are still not available, and in terms of prognosis, the difficulties of treatment and the conjunction of complications inherent to a delay in diagnosis explain the seriousness of these suppurations [4]. We report our experience in order to evaluate this pathology from an epidemiological, clinical, paraclinical, therapeutic and evolutionary point of view in our department.
METHODS
This was a descriptive retrospective study of 88 intracranial empyema’s files collected over a 5-year period (January, 2014 – December, 2018) in the archives of the neurosurgery department of Conakry University Hospital. The diagnosis was made by CT scan. Follow-up was 6 to 12 months. The parameters studied were frequency, age, sex, clinic, imaging, biology, treatment and evolution. We excluded all incomplete files, all empyema’s of tuberculosis origin and all empyema’s associated with abscesses. Data were collected and analyzed using SPSS 21.0 software.

RESULTS
Out of 204 cases of ICS collected, intracranial empyema’s represented 88 cases, or 43.1%. The average age was 14.6 years (2 years-42 years) with a sex ratio of 1.8 (57 males/31 females). The entrance door was dominated by otorhinolaryngological infections, 76.5% and unknown in 19% (Table 1).
The time to diagnosis varied from 3 days to 3 months. Clinical data are summarized in Table 2. Biology showed hyperleukocytosis in 90%, C-reactive protein positive in 80%. The bacteriology was 80% negative, the germ was found in 18 cases (Table 3). 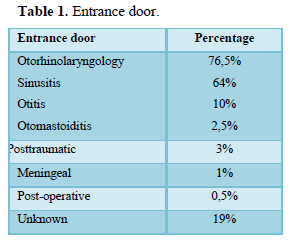 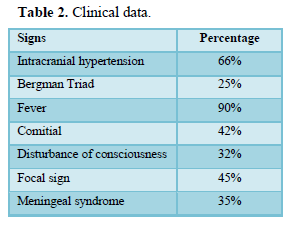 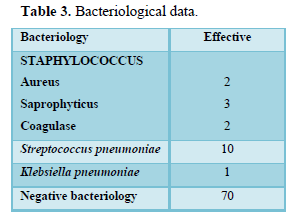 In terms of imaging, the empyema’s were subdural in 59 cases: hemispherical in 42 cases (Figure 1), interhemispheric in 16 cases (Figure 2) and one case of the tent of the cerebellum, and extra Dural 29 cases (Figure 3).
Therapeutically, a probabilistic tri-anti biotherapy, combining a 3rd generation cephalosporin (100 mg/kg weight), metronidazole (40 mg/kg weight) and combined in 54% with gentamycin (4 mg/kg weight) or thiamphenicol in 46% (50 mg/kg weight) was instituted for 3 weeks parenterally and continued orally for 4 to 8 weeks. It was then adapted to the results of the antibiogram. The treatment was 9% exclusive medical for the collections measuring less than 2 cm, in 91% of the cases the surgery was associated with a delay ranging from 24 h to 3 months. For the majority of cases, it was performed within the first 24 h with 74 cases of trepanation, 11 cases of flaps and 3 cases of craniectomies. It was justified on the basis of size and clinical tolerance criteria, in particular disorders of consciousness associated with a compressive collection. The entrance door was treated in 60% of cases. Anticonvulsant therapy (42%), corticosteroid therapy (13%) for intracranial hypertension associated with cerebral oedema and heparin therapy (3%) for cerebral thrombophlebitis were also associated.
The evolution was marked by healing without sequelae in 60 cases (68.1%), healing with sequelae in 16 cases (18.1%), 6 cases (6.8%) of recurrence, requiring re-intervention and 12 cases (13.6%) of death. Table 4 summarizes the neurological sequelae. 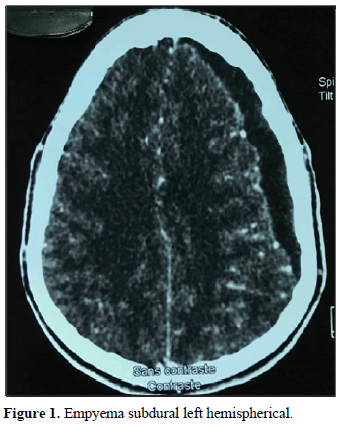 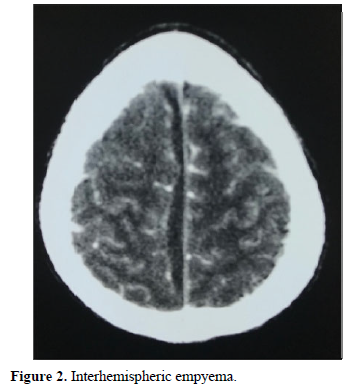 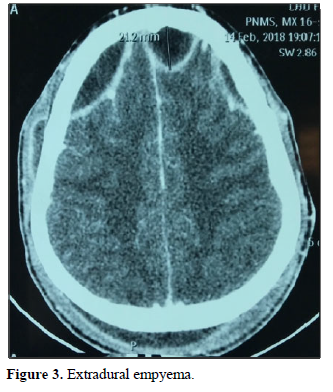