Autoantibodies to 5’-nucleotidase 1A (NT5c1A/Mup44) are regarded as a biomarker for sporadic inclusion body myositis (sIBM). Among other diseases, anti-NT5c1A has been reported in Sjögren syndrome (SjS) andin up to 27% of juvenile dermatomyositis (JDM). In this serologic study we determined the sensitivity and specificity of anti-NT5c1A in a multi-center, international JDM cohortand in other pediatric autoimmune rheumatic diseases. Sera from 117 JDM patients from Canada, United States and Mexicoas well as controls and comparators were stored at -80°C until required for analysis. The pediatric comparators included juvenile idiopathic arthritis (JIA) (N=118), systemic lupus erythematosus (pSLE) (N=36), localized scleroderma (pLSC) (N=108), and systemic sclerosis (pSSc) (N=114).IgG antibodies to NT5c1A were detected by an addressable laser bead immunoassay (ALBIA) using a full-length human recombinant proteinas previously published, and a cut-off which was two standard deviations above the mean of pediatric healthy controls. ANA was detected by immunofluorescence assay (IFA) on a HEp-2 substrate.

INTRODUCTION
Cytosolic 5’-nucleotidase 1A (cN1A; NT5c1A; Mup44) is highly expressed in skeletal and heart muscle and is part of a family of enzymes involved in dephosphorylating non-cyclic nucleoside monophosphates [1], thereby playing a role in the regulation of adenosine monophosphate (AMP) [2,3]. Antibodies to NT5c1A have been reported in multiple diseases, most significantly in sporadic inclusion body myositis (sIBM), systemic lupus erythematosus (SLE), Sjögren syndrome (SjS), and juvenile dermatomyositis (JDM) [4-14]. Pathophysiologic mechanisms of anti-NT5c1A remain unclear, although the presence of anti-NT5c1A in sIBM patients has been associated with more severe motor and bulbar involvement [8], a higher adjusted mortality risk [10], more frequent hospitalizations and medications in JDM [14], and greater respiratory involvement in both sIBM and JDM [8,14].
Recently, we studied the utility of anti-NT5c1A in sIBM and reported that anti-NT5c1A had moderate sensitivity and high specificity (49% and 92% respectively) [13]. On a univariate analysis, we also found that the anti-NT5c1A may be associated with more severe muscle weakness (Odds Ratio (OR) 4.10 [95% confidence interval (CI): 1.17, 14.33], p =  0.027) although this was not statistically significant in the multivariable analysis (adjusted OR 4.30 [95% CI: 0.89, 20.76], p =  0.069) [13].  As part of this study, we compared the frequency of anti-NT5c1A in sIBM to other autoimmune and musculoskeletal diseases, including JDM.  Our initial JDM group consisted of 40 patients from one center, none of which were positive for anti-NT5c1A [13], a finding that was in contrast to the only other study detailing frequencies of anti-NT5c1A in pediatric populations, which reported a frequency of 27% in JDM,27% in juvenile idiopathic arthritis (JIA) and 12% in healthy controls[14]. There have been no previous studies reporting frequencies of anti-NT5c1A among patients with pediatric systemic lupus erythematosus (pSLE), or pediatric systemic sclerosis (pSSc).

Accordingly, we restudied anti-NT5c1A in a multi-center international cohort of JDM and in other pediatric autoimmune rheumatic diseases. We also re-analyzed anti-NT5c1A positive pediatric patients to determine if anti-NT5c1A was associated with a specific HEp-2 indirect immunofluorescence assay (IFA)  pattern.
METHODS
Patients and controls
Patients with a diagnosis of JDM were identified and followed by tertiary care specialists at Alberta Children’s Hospital (Calgary, Alberta, Canada), Duke University (Durham, NC, USA), the University of Pittsburgh (Pittsburgh, PA, USA), and the University of Guadalajara (Guadalajara, Mexico), using previously published and validated criteria [15]. Patients with other diseases and healthy controls were collected from Duke University, the University of Pittsburgh, the University of Washington (Seattle, WA, USA), McMaster University (Hamilton, Ontario, Canada), and the University of Calgary. In total, sera from 117 JDM patients, 376 patients with a pediatric autoimmune rheumatic disease, and 76 apparently healthy pediatric controls were collected and analysed for anti-NT5c1A autoantibodies. The pediatric autoimmune rheumatic disease cohort included JIA (N=118), pSLE (N=36), localized scleroderma (pLSc) (N=108), and pSSc (N=114). For comparison, we also show our previously published adult controls (13): sIBM (N=73), adult dermatomyositis (DM) (N=57), polymyositis (PM) (N=16), adult systemic lupus erythematosus (SLE) (N=199), adult systemic sclerosis (SSc) (N=50), osteoarthritis (OA) (N=47), adult rheumatoid arthritis (RA) (N=27), Sjögren syndrome (SjS) (N=19), and adult healthy controls (N=78), although the adult groups were not included in the calculations. All patients were anonymized with an alphanumeric code and sera were stored at Mitogen Diagnostics (Calgary, Alberta, Canada) at -80°C until required for analysis.
This research was approved by the Health Research Ethics Boards (HREB) at each centre and performed in accordance with the Helsinki Declaration of 1975 as revised in 2013.  When needed, written informed consent was acquired.
Autoantibody testing
Autoantibody testing was done at MitogenDxby an addressable laser bead immunoassay (ALBIA) using a full-length human recombinant protein (Origene, Rockville, MD: Cat. #TP324617).  Our protocol, adapted from previous studies [16,17], was detailed in our previous report [13]. The cutoff based on the healthy pediatric controls was established as 1460 median fluorescence units (MFU) for anti-NT5c1A positivity, which is 2 standard deviations (SD) above the mean MFU. The results of the ALBIA were validated by reference to a commercially available and Health Canada approved anti-NT5c1A immunoassay (Euroimmun AG, Luebeck, Germany). When the cutoff for the commercial assay was adjusted to 3 SD above the mean of healthy pediatric controls, the concordance of the two assays was >85% (data not shown).
Anti-cellular antibodies (ACA) were detected by indirect immunofluorescence assay (IFA) on HEp-2 cell substrates (NOVA Lite HEp-2, Inova Diagnostics, San Diego, CA) at a serum dilution of 1:80.  Patterns were read on an automated instrument (Nova View, Inova Diagnostics) which interpolates fluorescence intensity to an end point titer [18]. Patterns were classified according to the International Consensus on Autoantibody Patterns (ICAP: www.anapatterns.org) [19]. If multiple patterns were noted in a particular serum, they were coded as separate ICAP patterns ((https://anapatterns.org/index.php).
RESULTS
The frequency of anti-NT5c1A in our JDM patients compared to other rheumatic disease and healthy controls is summarized in (Table 1), and the absolute values of anti-NT5c1A antibodies for each 117 JDM patient is displayed in (Figure 1). With the additional sera, the frequency of anti-NT5c1A among our expanded JDM group was 29/117 (24.8%). In comparison, the frequency of anti-NT5c1A among adult DM was 2/57 (3.5%), and in sIBM was 46/73 (63.0%). Our total disease control frequency in the comparator pediatric autoimmune rheumatic disease population was 43/376 (11.4%).  Specifically, the frequency in each disease control group was 9/118 (7.6%) in JIA,8/36 (22.2%) in pSLE, 15/108 (13.9%) in pLSC, and11/114 (9.6%) in pSSc. The frequency of anti-NT5c1A among apparently healthy pediatric controls was 3/76 (3.9%).  The calculated sensitivity, specificity, positive and negative predictive values of anti-NT5c1A in JDM was 0.25 [95% CI: 0.17, 0.33], 0.90 [95% CI: 0.87, 0.93], 0.39 [95% CI: 0.28, 0.50]  and 0.82 [95% CI: 0.79, 0.86], respectively. 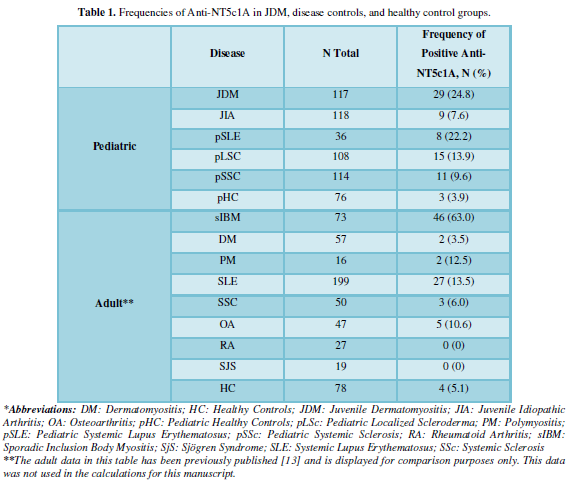 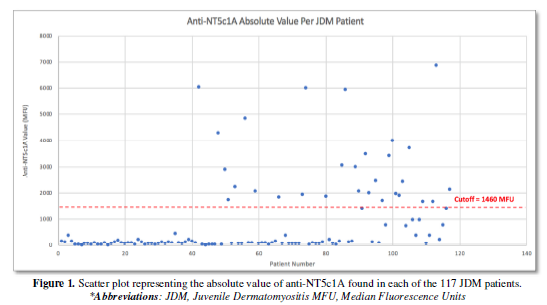 DISCUSSION
In the current serologic study of an international JDM patient cohort (N=117), the frequency of anti-NT5c1A was24.8%. Anti-NT5c1A was also present among 7.6% with JIA, 22.2% with pSLE, 13.9% with pLSc, and 9.6%with pSSc. We found that the anti-NT5c1A had poor sensitivity at 25% and a relatively high specificity at 90% for JDM.
When evaluating groups of all ages, the highest frequency of anti-NT5c1A was among patients with sIBM (reviewed in [13]). However, patients with sIBM most often present between 45 and 70 years of age [20], therefore it is highly unlikely that a patient who is being considered for the diagnosis of JDM will have sIBM. It is important to note, however, that the muscle pathology of JDM is highly variable including perifascicular atrophy, macrophage-rich necrosis, scattered necrosis, clustered necrosis, inflammatory fiber invasion, chronic myopathic change, and diffuse endomysial macrophage infiltrates and minimal change [21]. It would be interesting to determine if anti-NT5c1A is correlated with particular pathological features, which has been reported for other autoantibodies such as anti-Mi2 in JDM [22].
In addition, this is the first study to report frequency of anti-NT5c1A in pSLE, pLSc and pSSc. Most notably, the frequency in pSLE was 22.2% (8/36), which is close to the frequency in JDM. sIBM has been reported in SLE [23,24] but not pSLE, and 17% of pSLE were reported to have myositis, some of which were associated with anti-Ribonucleoprotein (RNP) autoantibodies [25]. In adult SLE, the frequency of anti-NT5c1A was reported to be as high as 20% [26]. In this study of adult SLE, there was no relationship between anti-NT5c1A and other autoantibodies, the frequency of muscular symptoms or viral infections but there was a higher frequency of co-morbidity from other autoimmune diseases. Further studies in pSLE patients will be needed to elucidate the clinical and serological correlates of anti-NT5c1A in this population.
The frequency of anti-NT5c1A autoantibodies in a previous study by Yeker et al. [14] of 307 JDM was reported to be 27%. The same study found a frequency of 35% (N=46) in patients with juvenile overlap myositis, and 27% (N=30) in patients with JIA. As comparators in the study, 11% (N=27) of patients with juvenile polymyositis and 12% of healthy control children were positive for anti-NT5c1A [14].  Following the expansion of our JDM cohort, the frequency of 24.8% (N=117) is consistent with this previous report by Yeker et al. In contrast, the frequency among our JIA cohort was lower in comparison to Yeker et al. (7.6% vs 27%), which may have been due to our larger patient cohort or differences in assays used. Yeker et al. also found that children who were anti-NT5c1A autoantibody positive had greater pulmonary symptoms at diagnosis, more frequent hospitalizations, and needed more medications to control their disease [14]. Further studies correlating anti-NT5c1A positivity to clinical and demographic features in pediatric patients with rheumatologic and connective tissue diseases are needed to further explore these relationships, and to ultimately determine the pathogenicity of anti-NT5c1A autoantibodies. Nevertheless, it is becoming apparent that while anti-NT5c1A autoantibodies are an important biomarker in sIBM, they are also found in a significant proportion of other autoinflammatory rheumatic diseases, including those in children. Since NT5c1A dephosphorylates the 5' and 2'(3')-phosphates of deoxyribonucleotides [27], it is interesting to consider that these autoantibodies belong to a larger family of RNA and DNA macromolecular complexes (i.e. small nuclear RNP, small cytoplasmic RNP, and tRNA synthetases) that are well-known targets in pediatric and adult systemic autoimmune rheumatic diseases [28].
Our repeat HEp-2 IFA analysis of anti-NT5c1A positive JDM sera did not reveal a specific IFA pattern that could be used as a screening test.  NT5c1A has been reported to be localized in the cytosol [27], thus it is likely that the mixed IFA findings in our study reflect undetected and confounding antibodies. Future analyses using “monospecific” anti-NT5c1A sera may assist in determining whether a reliable screening ANA IIF pattern exists for anti-NT5c1A autoantibodies.
Limitations of our study include the small sample size of JDM, disease comparators and healthy control patient cohorts. This can be addressed with international multi-centre studies using a full-length anti-NT5c1A protein for detection of autoantibodies, in an ALBIA or equivalent immunoassay, as done here and previously [13]. Unfortunately, no “gold standard” assay exists for anti-NT5c1A autoantibodies, although we found high correlation of our ALBIA with a commercially available enzyme-linked immunosorbent assay (ELISA) when the assays cut-offs were adjusted according to pediatric control samples.  This was a cross-sectional study and, therefore, we were unable to assess if anti-NT5c1A antibodies were present at the time of diagnosis and/or if they remained stable over time.  Last, we did not study clinical or demographic correlations in our pediatric cohorts because the serum samples were drawn from seven geographically dispersed centers where a unified ethics protocol and appropriate patient consent presented challenges. Hence, we were unable to study comorbidities such as myopathy or other features of sIBM. Given the presence of anti-NT5c1A antibodies in diverse pediatric autoinflammatory conditions, it seems unlikely that features of sIBM would be found. However, there is a possibility that a unique clinical phenotype may emerge from prospective longitudinal studies.
In summary, we have found that anti-NT5c1A has a poor sensitivity but a relatively high specificity for JDM. This study is also the first to report frequencies of anti-NT5c1A in pSLE, pLSc, and pSSc. Furthermore, we were unable to identify a consistent HEp-2 IFA staining pattern among anti-NT5c1A positive JDM patients, thus ANA test is not a useful screening test for detection of these autoantibodies.  Additional studies are needed to further delineate pathophysiologic mechanisms and the clinical, demographic, and serological associations of anti-NT5c1A antibodies among patients with inflammatory myositis.