Research Article
TOURISTS DEMAND ON PHUOC TICH HERITAGE VILLAGE: A MINI–REVIEW
It is essential to have a deep understanding of the motivations of tourists coming to heritage sites for community economy development through tourism. Approaching by value chain analysis on demand side, the study examined the tourists, who visited Phuoc Tich Heritage village in the center province of Vietnam, with a specific focus on their travel motivations, expenditure and on identifying from a tourist’s perspective where the tourism value chain can be strengthened. The results show that general demographic profile of a tourist travelling to Phuoc Tich village is someone who is in upper middle class with well-educated. Traditional handicrafts, local people’s lifestyles and culture are the elements have attracted them coming to the heritage site. Tourists love to emotionally involve in the simple and slow life at Phuoc Tich Heritage village, wherein they can explore the local food and cultural behaviors of rural people in an environment that is hundreds of years old. However, the interaction between them and the villagers was low, shallow and limited, especially day-trips tourists.

Keywords: Tourist’s demand, Heritage village, Value chain analysis
By the early 1990s, the New Age tourism movement highlighted the transformation of the international tourism industry from ‘old’ to ‘new’ tourism, with the rising number of ‘alternative’ tourists who are in favor of more individualistic and authentic experiences (Poon, 1994; Rid, Ezeuduji, & Haider, 2014; Telfer & Sharpley, 2008). They are ‘multi-experiences’ seekers interest in authentic experiences by spending their time on their journey and engage with local people and the destination (Dickinson & Lumsdon, 2010). Many authors defined this phenomenon is slow tourism, which is an emerging form of tourism that involves unhurried pace of travel, deep gazing, interaction and immersion in host cultures by forging meaningful and thorough connections (Chhabra, 2020; Dickinson, Lumsdon, & Robbins, 2011). The tourist’s motivation in slow tourism is the mandatory requirement to fully understand this new form of tourism to heritage site (Devesa, Laguna, & Palacios, 2010).

Travel behavior is a continuous process that includes varied yet inter- correlated stages including pre-visit, on-site and post–visit, in which tourists’ motivation is the main theme (Lohmann, 2004; Mill & Morrison, 2012). According to Cohen, Prayag, and Moital (2014) the concepts, influences and contexts in the field of travel behavior have been developed as 9 key concepts including decision marking, values, motivations, self-concept and personality, expectations, attitudes, perceptions, satisfaction, trust and loyalty (Prayag, Hosany, & Odeh, 2013; Yoon & Uysal, 2005), specific influences as technology and generation Y and particular research contexts like under-researched segments, individual vs group decision making. This study focuses on the concepts of motivation behind the decision travelling to Phuoc Tich heritage village to understand their demands. Approaching from tourism value chain, all processes and elements in the production of tourism services will be identified and the supply stakeholders will be able to fully understand their shortages causing tourists’ dissatisfaction in their journey (Giuliani, Pietrobelli, & Rabellotti, 2005; Nguyen, 2015).The tourism value chain becomes critical to measure and manage the overall efficiency and effectiveness of the tourism product and services as an end-to- end value chain (Yilmaz & Bititci, 2006).

Phuoc Tich Heritage village, situated in the center province of Vietnam, is well known for its traditional pottery crafts and ancient houses (Nguyen, 2015; Thong, 2010). At present, many local residents of Phuoc Tich village have become stakeholders in tourism (Dan, 2005; Nguyen, 2015). Local cultures, natural resources and historical artefacts of Phuoc Tich Heritage village are local resources shared by all Phuoc Tich villagers will be potential resources for tourism development. The current tourism value chain in Phuoc Tich Heritage village comprises tourists, travel agents and tour operators (TA/TO), the Phuoc Tich management board (PTMB) and the local residents who supply several tourism services to tourists. It composed several types of tourism products such as visiting the ancient structures and spaces of typical garden houses in central Vietnam, involving in pottery making process, cycling inside the village, tasting local dishes, taking a boat trip on the O Lau river, and experiencing a homestay hosted in one of the ancient houses (Figure 1).

The study applied semi-structured interviews and self-administered surveys focus on the tourists’ motivation and expectation of Phuoc Tich destination on three stages of their journey: pre-visit, on site and post-visit. The domestic and international tourists grouped as the homestay tourists, and the day visitors. The self- administered visitor questionnaire consisted of 43 closed and open-ended questions, which were offered in Vietnamese, English or French, reflecting the dominant tourist markets. One hundred and thirty-two tourists participated in the survey and semi-structured interviews in the study, which are 53 face to face interviews and 79 completed questionnaires. 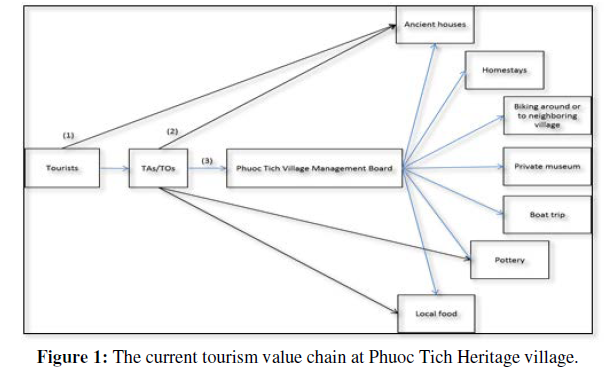 TOURISTS PROFILE AND THEIR DEMANDS

The general demographic profile of a tourist travelling to Phuoc Tich Heritage village is well educated, and with a relatively high discretionary income, who are attracted by the authenticity and unique characteristics of the village. The study found out pottery is not featuring as a factor in their decision to come to the village. The majority of tourists coming to Phuoc Tich is the international long -haul tourists (43%), who are in middle age, from Europe, US-Canada and tend to travel with their family through assistance of tour operators. While domestic tourists are younger (often from 18-45 years old) and likely to travel by themselves. The remaining tourist segment is given to Japan and ASEAN countries, which is consisted of 28%.

The tourists, travelling to Phuoc Tich, had adopted a multiple-mode approach to gathering information with the most important source from travel articles &documentaries and other sources as a travel book, travel guide or brochure. The common tourism products that tourists had participated in, or services they had used, during their visit to Phuoc Tich Heritage village are seeing the architecture of the local heritage houses, in both in the interior and exterior design (99.2%). A large percentage of visitors (88.6%) also stated that they had seen the pottery being made in the pottery production space. Making pottery under the guidance of local potters and then firing that pottery was a new experience and got excitement for nearly all the tourists. Most of them wanted to buy something as souvenirs, symbolic reminders of their experiences at a Heritage village. However, the supply stakeholders haven’t satisfied the tourists in this market. Nearly three quarters (73.5%) of the respondents reported that they had tasted local dishes, and more than a half (53.5%) had enjoyed the cycling activities around the village.

Though the tourism products at Phuoc Tich heritage sites are authentic, diverse and interesting, just only the tourists booking through TAs/TOs and PTMB could be able to experience the provided products (see the tourism value chain in Figure 1). The majority of tourists commented that there were “nothing to do” and a “lack of activities” in the village, or that Phuoc Tich “just seemed like an isolated and desert planet”. A fifth of tourists noted “the pottery is simple, and not quite

Hoa & Duong
impressive”. They also showed disappointed feelings that they couldn’t see the fire and feel the temperature of the kiln at the pottery village when there are not many remnants left related to the famous pottery history of the village.
Download PDF View PDF