Egypt Air suffered from great losses as a result of the 25th of January 2011 Arab spring in Egypt. As a result of decline in travel demand to/from Egypt due to the political instability and security concerns, Egypt Air promoted transit traffic through Cairo hub but suffered further losses due to low yield of the connecting traffic.

Egypt Air initiated several strategic turnaround decisions to try to stop the performance decline and build for the future. The initiatives were followed with a restructuring project to reduce cost and increase efficiency.

A descriptive analysis of the strategic turnaround decisions and the restructuring program is carried out supported with an in-depth interview with Egypt Air executives to understand the nature of those decisions and the challenges facing Egypt Air in the future.

The Egyptian government should support Egypt Air transformation plan financially to be able to meet its obligations during this transition phase. After restructuring Egypt Air should seek a strategic partnership with a global carrier to be able to meet competition or arrange for a part IPO to be able to fund its future development and expansion. Several other initiatives regarding business process, employee training, talent recruitment, asset retrenchment should be addressed to able to be profitable again.

The decline in demand to travel to Egypt and especially Cairo impacted both the local and connecting traffic. Egypt Air subsidiary companies providing third party services were further impacted from the traffic decline at Cairo airport since many international carriers stopped or reduced their operation significantly.

Egypt Air as a state-owned carrier helps to promote travel to/from Egypt which in turn helps to develop the Egyptian economy. Its survival and existence are important for the future development of the country; thus, it is a requisite to identify characteristics of declining industries and nature of strategic turnaround decisions, analyze different cases of airline recovery and transformation and understand Arab Spring impact on the Egyptian economy and Egypt Air performance.

Egypt Air initiatives for strategic turnaround had to be carefully analyzed while addressing the future challenges and recommendations to stop performance decline and achieve sustainable profitability. Furthermore, an in-depth interview had been carried out with 10 Egypt Air executives, the interview revolved around the recovery and transformation plans that included different turn around strategic decisions to stop the performance decline and try to return to sustainable profitability.

Porter (1980) indicates that the declining industries are those that have experienced an absolute decline in unit sales over a sustained period of time. Slower economic growth, product substitution resulting from cost inflation and continued technological change would further impact the decline in performance.

Market conditions change, and when they do change then existing routines and practices may no longer be optimal. This change is difficult, and it can sometimes mean losing core competences (Dobrev et al., 2001).

Organizations are slow to adapt to changing market conditions. The existing employee’s skills and motivations are committed to the current processes and procedures, which may create political opposition to the coming change (Dobrev & Barnett, 2001).

Under the political opposition of the employees, and the unwilling top management team to pursue change due to fear about their own future, management may try to delay the change until it is absolutely deemed necessary hoping that the environmental conditions would change and the business would catch up.

Barker & Duhaime (1997) suggest that turnaround occurs when a firm suffers from a survival threatening performance decline over a period of years, but is able to reverse the performance decline, end the threat to firm survival and achieve sustained profitability.

Stacey (1993) observed that managers who think strategically are bound to act more effectively in dealing with the future. To be strategic an action must reinforce or change one or more of the following:

A- The scope of the corporation portfolio of businesses.

B-The market or horizontal scope of an individual business.

C-The value offered to customers of an individual business.

E-The operating strategy used by a business to deliver value to its customers.

Shoenberg, Collier & Bowman (2013) identified six most frequent turn around strategies that were applied by firms that suffered from a performance decline to achieve a sustained recovery. These turnaround strategies are:

A new top management team with new skills to focus on the new strategies is considered a precondition for almost all successful turnaround (Hofer, 1980).

CASE STUDIES OF RECOVERY AND TRANSFORMATION

The first approach focuses on Improvement and innovation favored by companies that have fallen behind adopted by Aeroflot, Air Canada and ANA.

This approach is based on reinforced corporate strategy and organizational restructure to regain customer trust and loyalty. Network restructure, business process reengineering, and cost control provided a new value proposition to existing and potential customers.

Customers of Air Canada had the choice to pick from several sub-branded fare structure under the new a la carte pricing offer (Hampton, 2006). The airlines took advantage of the internet to make their products easily accessible through their internet sites and E-ticketing.

To achieve a leaner group structure the airlines pursued fleet optimization and network realignment to increase traffic through their hubs while trimming cost.

The second approach focuses on extension and expansion. Underperforming airlines due to decline in their own historical markets such as LAN and TAM preferred this strategy to extend their services and expand in other geographical locations where opportunities exist.

LAN implemented a boundary Breaker strategy to setup airlines based on its strong customer focused value proposition in new markets away from its home country.

TAM airlines took advantage of the decline of Varig Airlines in Brazil through a reorientation strategy of product extension and market expansion. TAM adopted a more cost-efficient model to compete with the low fare carriers. TAM attracted the business of the market by a strong brand identity (Pereira, 2006).

Aerlingus founded in 1936. A state-owned airline acting as the national carrier of Ireland, suffered from inefficiency and bureaucracy that classified it with the symptoms and characteristics of distressed state airline Syndrome (Doganis, 2001).

The top management team emphasized the importance of communication between them and the employees, a culture change lead by informality, flexibility and reduction of bureaucracy (Monsanto, 2014).

As a result of the political upheaval, the unemployment rate reached 11.9% in the 1stquarter of 2011 post the revolution (CAPMAS, 2011).

The tourism industry revenues in Egypt dropped by nearly 60% with arrivals dropping to nearly 45% in the 1st quarter of 2011 (World Bank, 2011).

(Mansfeld & Winklere, 2015) illustrated that the Arab spring impact on tourism was unprecedented in the region, especially Egypt with its ramification spreading for many years. Political instability and war in the Middle East spreading from Libya to Syria and Yemen further aggravated the situation.

(Pizam & Mansfeld, 1996) elaborated that the tourism sector and in consequence the travel business is affected directly and indirectly from violent conflicts and/or political instability.

The fear of travel would be more pronounced by the travel warning issued by the western countries. The travel warnings lead to a drop in air travel to and from Egypt (Nasr, 2012). The central Agency for Public Mobilization and Statistics illustrates in the statistical yearbook tourism section the total number of tourist arrivals in Egypt starting from 2009 till 2018 (CAPMAS, 2019). 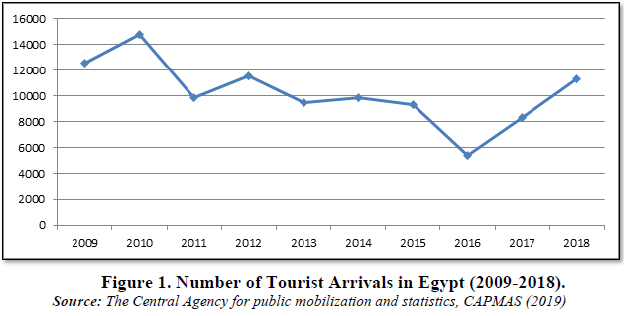 At the end of 2016, the introduction of the Egyptian government economic reform promoted tourism in Egypt, tourism flourished, and tourist arrivals grew to reach 11,347,000 tourists in 2018.

Egypt Air was founded in May 1932. A state-owned airline acting as the national carrier of Egypt, transformed in July 2002 into a holding company and nine subsidiaries.

As a result of the political upheaval the chairman and CEO of Egypt Air Holding Company announced that the Group is ready to lease up to 25% of Egypt Air fleet (CAPA, 2011).

The situation during the events of the political upheaval was marked by labor disruption and industrial demands from labor unions. Eminent strikes were always around the corner, with continuous interference from unions into management decisions. Egypt Air airlines alone lost 2,204 billion EGP in FY 10/11(Egypt Air, 2011). 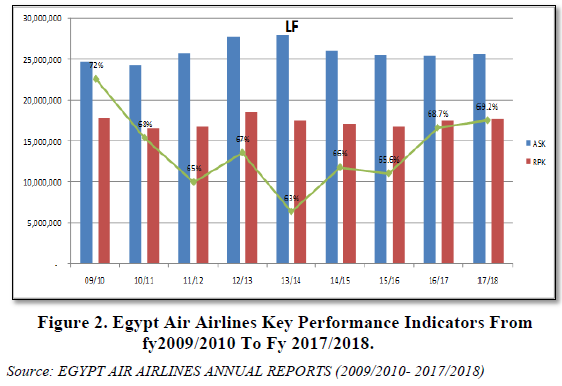 Egypt Air Airlines implemented network adjustments expanding in Africa, Europe and the Middle East with new destinations in Asia. Transit traffic at Cairo hub increased from only about 3% before the political turmoil to reach 17% in FY 12/13 then to further increase to reach nearly 30 to 35% out of Egypt Air total traffic in FY 13/14 (CAPA, 2014).

The increase in transit traffic pressured the yield down through heavy discounting as the cumulative losses have reached almost USD 1.5 billion since the political upheaval (CAPA, 2014).

From Figure 3, Egypt Air Airlines net results are illustrated for the period from FY 09/10 to FY 17/18. As a result of the 25th  of January 2011 Arab spring and the political unrest that was accompanied  with it, the demand to travel to Egypt diminished especially Cairo airport which is Egypt Air Airlines dedicated hub. 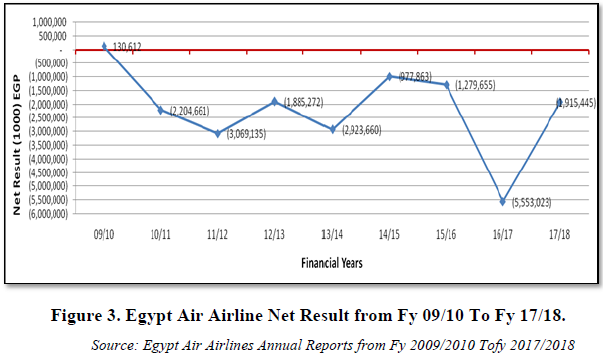 Egypt Air Airlines suffered from continues losses that started from FY10/11 with a loss of 2,204 billion EGP to totally reach accumulated losses of 20 billion EGP in FY 17/18. The losses in FY 16/17 reached alone 5,553 billion EGP as a result of low yield, low load factor and the foreign exchange currency rate losses due to the introduction of the Egyptian government economic reform measures by end of 2016.

An in-depth interview was carried out with 10 executives of Egypt Air to understand the environment that surrounded the strategic turnaround decisions and the objectives that were meant to be achieved.

The new executive team at Egypt Air holding company announced at the beginning of 2014 capacity cuts as part of a new strategic turnaround plan. The slim network strategy announced by the CEO includes frequency cuts on some European, Asian and Middle Eastern routes. Unprofitable routes such as Jakarta and Kuala Lumpur that are heavily dependent on transit passengers with low yields were suspended (CAPA, 2014).

The introduction of the slim network strategy with a modest capacity reduction of 8.5% did not stop the continuous losses of Egypt Air. A consultant was appointed in December 2014 to develop a project for further strategic decisions for turnaround.

The transformation plans covered work streams in commercial and operations areas in order to achieve growth, improve products and services, develop an effective organization and achieve Profitability to fund the future (El Hefny, 2019).

The strategic turnaround decisions were as follows:

There was a change of leadership by the end of 2015. The new Egypt Air holding company CEO announced that Egypt air would be implementing a new major restructuring plan. The plan core elements include network and fleet development with a cost reduction plan (Egypt Air, 2016).

By mid-2018 there was another leadership change with the appointment of a new CEO at the head of Egypt Air holding company who announced the hire of another consultant to assist with a new strategic turnaround plan and its implementation phase. The aim of this new strategic turnaround plan was to improve the performance of the group subsidiaries and their inter relations to increase efficiency by relocating certain activities and processes within the group (Rivers, 2019).

The new turnaround restructure plan improved the group performance, the consolidated group result losses decreased to just 1,915 billion EGP for FY 17/18 from a heavy loss of 5,553 billion EGP in FY 16/17.

1. Raising capital to fund future transformation and product upgrade. This challenge would be more pronounced with the Egyptian government comprehensive economic program that includes an initial public offering (IPO) for state owned companies in all their forms and legal nature. The economic program aimed to raise additional funds and lure more investments and to optimize the state’s assets.

Egypt Air was subject to heavy losses due to the 25th of January 2011 Arab spring political instability. As a result of reduced demand to travel to/from Egypt, Egypt Air tried to increase its load factor by promoting connecting travel through Cairo hub. The increase of frequency and new destinations supported with heavy discounting failed to increase the load factor, the result was continuous heavy losses.

Centre of Asia Pacific for Aviation. (2011). Egypt Air chairman states plans to lease up to 25% of aircraft only one option.

Oconnel, J. & Connolly, D. (2016). The strategic evolution of Aerlingus from a full-service airline to a low-cost carrier and finally positioning itself into a value hybrid airline. Tourism Economics 23(6): 1296-1320.