Results: It was observed that natural sites sampled within each of the parishes contained levels of radiation between 1.21 and 1.5 mSv/year. St. John and St. Mark were the only two out of the six parishes to record construction site radiation levels below 3.0 mSv/year. The highest recording was 3.3 mSv/year at construction sample sites in St. Andrew. Residential sites in St. George, St. John, St. Mark, and St. Patrick were observed to have radiation levels at or near 2.4 mSv/year. St. Andrew was shown to contain the highest levels of both residential (2.6 mSv/year) and construction site background radiation.

Natural background radiation has always existed on earth in various forms and human exposure at some level is unavoidable. Radiation has the potential to create lasting effects on all living things and it is assumed that there is no safe level of exposure. The effects of chronic low levels of exposure are still largely unknown, thus, the study of low-dose background radiation and its potential effects on human health are of growing interest.

Most of what we understand today about radiation and its effects on health comes from studies following major nuclear incidents and, thus, exposure to very high doses of radiation. Such research has been extremely useful in establishing a relationship between radiation exposure and cancer incidence, particularly thyroid cancer and leukemias [1-4]. But the doses received by the earth’s populations on a daily basis are nowhere near the most studied levels. There have been several studies of populations in areas with higher-than-average levels of natural background radiation, but results have been variable, and no significant link has been established between lower levels of radiation exposure and health outcomes [5,6]. It is notable, however, that changes from low-dose exposure to radiation have been observed at the molecular level in both a study population and experimentally [7,8]. How these effects manifest over time remains to be seen. Further study as to the role of naturally occurring radiation in population health outcomes is necessary and has been included in recent publications and recommendations from the International Commission on Radiological Protection (ICRP) and the United Nations Scientific Committee on the Effects of Atomic Radiation (UNSCEAR).

The purpose of this study is to observe measurable background radiation on the main island of Grenada, West Indies and determine whether levels are within normal limits, or high enough to be a concern for the island’s population. Grenada’s population size is not large, but its relative limited movement provides a unique study opportunity in radiation epidemiology and radiation risk estimation. This study will be especially valuable given the increase in construction efforts and ground disturbance following Hurricane Ivan and continued urbanization on the main island.
Grenada is a Caribbean state comprising of the islands of Grenada, Carriacou, and Petit Martinique. It is located at the southern end of the windward islands. The population of Grenada was estimated at 105,892 in 2005 with an estimated growth rate of 2.6% [9]. The health system in Grenada has been challenged by increasing demand for new technology, as well as a need for health sector reform, financing, and health information. These challenges were amplified following widespread devastation from hurricane Ivan in 2004. The effects of Ivan can still be seen on the island today.

Causes of Mortality in Grenada

The most recent Pan American Health Organization (PAHO) report on Grenada estimated the leading causes of death between 2003 - 2005 to be diseases of the circulatory and respiratory systems, malignant neoplasms, parasitic diseases, and endocrine and metabolic diseases [9]. During this period, there were 634 reported cases of malignant neoplasms, however, most cases were reported to have fallen among those ages 45 and older. Given the data for this report include the occurrence of hurricane Ivan, it should be noted that reporting may have been hindered and incomplete during this time.

Each of the six parishes on Grenada’s main island were included in the study: St. George, St. John, St. Mark, St. Patrick, St. Andrew, St. David. A majority of Grenada’s population resides along its main access road. Thus, radiation measurements were taken from defined sites in close proximity to the main road in an effort to assess levels most likely to affect the population. 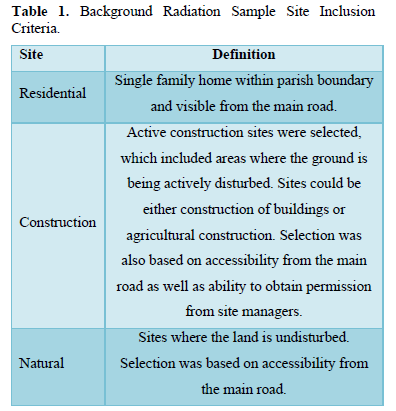 Three handheld Geiger-Muller counters (GMCs) were randomly placed at each of the three identified sample sites within the six parishes for background radiation sampling. At residential sites, one GMC was placed outside of the home and the other two GMCs were placed indoors where persons indicated they spent the majority of their time. Each GMC collected radiation readings for a total of one hour. Radiation levels were determined in mSv/hr. Samples were all taken at midday in an effort to standardize the time of measurement.

Radiation data collected from defined sample sites (Residential, Construction, Natural) are summarized in Table 2 and Figure 1a. The UNSCEAR average radiation level of 2.4 mSv/year was added to Figure 1b for comparison with measured levels in Grenada.

It was observed that natural sites sampled within each of the parishes contained levels of radiation between 1.21 and 1.5 mSv/year. St. John and St. Mark were the only two out of the six parishes to record construction site radiation levels below 3.0 mSv/year. The highest recording was 3.3 mSv/year at construction sample sites in St. Andrew. Residential sites in St. George, St. John, St. Mark, and St. Patrick were observed to have radiation levels at or near 2.4 mSv/year. St. Andrew was shown to contain the highest levels of both residential (2.6 mSv/year) and construction site background radiation. 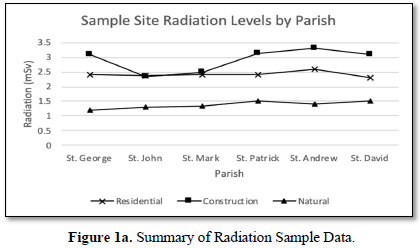 Data collected with Geiger-Muller counters (GMCs) over one hour. The measurement was converted to mSv/year dose (estimate).

Sample sites were compared with the UNSCEAR world average.
DISCUSSION
This was the first study of its kind in Grenada. The aim was to observe radiation levels in Grenada in an effort to contribute to ongoing research and study of Grenadian public health and disease burden. The levels of radiation in Grenada were not found to be above average levels internationally. Further study of cancer incidence and exposure would be useful in further understanding long-term low-dose radiation and health effects in the region. While summaries for the region can be found, data on the incidence and burden of cancer in individual Caribbean countries is scarce. Data collection and management remains an area in need of improvement for future studies and efforts to improve health outcomes.

The main health outcome of interest linked to radiation exposure is cancer. As discussed in the review, radiation at any level has the potential to permanently damage DNA. Cancer, by simple definition, is a condition of uncontrolled cell proliferation. One of the of the major causes of cancer is DNA damage that leads to mutations affecting the body’s ability to stop cancerous cells from replicating [6,10]. It is commonly known that radiation-induced solid cancers do not manifest until at least 10 years after radiation exposure [11]. Evidence to support this conclusion has come from data on high-dose exposure, however, no conclusions have been made regarding low doses.
While the 2007 health data from PAHO in this paper’s review lists malignant neoplasms as one of the leading causes of death in Grenada, more recent data suggests that Grenadians are primarily burdened by chronic conditions [12]. Cardiovascular disease (CVD), listed as ischemic heart disease, moved from position 3 to the top of the list of 25 causes of premature death in 2010 in Grenada [12]. CVD has been linked with high radiation dose exposure and a recent review suggests that emerging evidence indicates risk of cardiovascular disease even at doses of less than 0.5 Gy [8]. It should be noted that Grenada does not currently have a cancer registry, thus the true incidence of cancer is unknown and likely higher. Data from the Institute for Health Metrics and Evaluation on the global burden of disease listed two malignancies - pancreatic cancer and Non-Hodgkin Lymphoma in the top 25 causes of premature death in Grenada in 1990 [12]. In 2010, Breast cancer, colorectal cancer, prostate cancer, and liver cancer were added to the list, while pancreatic cancer and Non-Hodgkin’s Lymphoma increased in rank [12].

Several studies have attempted to report on cancer incidence in Grenada to improve the understanding of the population’s health and identify areas of potential intervention. St. George’s University’s Department of Public Health and Preventive Medicine provided a summary of cancer incidence in Grenada between 1996 and 2000 and morality data between 1990 and 2000, which found the Age-Standardized Rate per 100,000 for all cancers to be 170.2 among females and 158.2 among males [13]. The study determined that cervix, breast, uterine, and colon cancers were the most frequent forms of cancer associated mortalities among females. For males, cancer-associated mortalities were most frequently due to cancers of the prostate, lung, stomach, and colon. Statistically significant spatial trends for overall cancer mortality and temporal trends in incidence and mortality rates for prostate, as well as incidence rates for stomach cancer were found in comparison with other Caribbean states and the United States [13].

A more recent study summarized incidence and survival rate for head and neck cancers in Grenada between 1991-2010 [14]. Data was collected from records provided by Grenada’s only ear, nose, and throat specialist and compared with other African American populations. The overall finding for several sub-categories of head and neck cancer was that the age adjusted incidence per 100,000 was lower in Grenada than similar populations. The study noted, however, that incidence may be underestimated given the lack of cancer registry in the country [15].

There were several limitations to this study. Radiation data was only collected over 1 day and for a limited amount of time. Radiation levels are not constant and may change with season, weather patterns, or other influences. A method of radiation collection that could be in place for significantly longer periods of time would provide a more accurate estimate. While effort was made to identify representative of human exposure, the levels listed in this study are only in the location at which they were recorded. It is assumed that humans are exposed to the same levels if they are in the same area, but this is simply an assumption. A study in this paper’s literature review used wearable radiation collection devices, which likely provided a more accurate estimate of human exposure. However, the amount that actually comes into contact with human tissue can’t be recorded in a significant way with these methods. Another limitation is that the type of radiation was not identified. Different types of radiation have different potentials to damage human tissue.

Grenada’s background radiation levels were determined to be higher than the world average at four of the six parishes at construction sites. All of the natural sites were observed to have radiation levels below the world average. Among the residential sites in all of the parishes, Only St. Andrew was found to have a measurement above the world average. The remaining residential sites were at or below the average. The world’s leading radiation and atomic energy institutions have urged the assumption that no dose of radiation is safe. While there are no demonstrated health effects from very low doses of radiation, the long term-effects are still unknown. It is almost impossible to account for all possible confounding over decades of life, but an effort to improve radiation data collection and study should continue. Additionally, in countries such as Grenada, health data collection and official registries are crucial and should be prioritized. Public health efforts rely heavily on establishing baseline data to make the most appropriate and accurate recommendations possible.

We would like to thank St. George’s University School of Arts and Sciences, Department of Physics for their equipment and data collection. 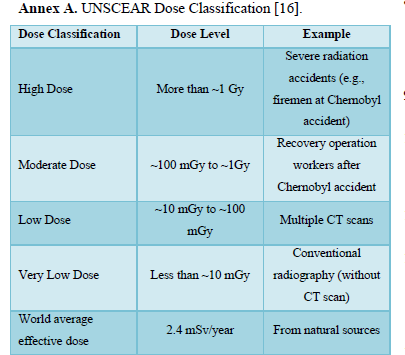