Research Article
Multiple Adverse Drugs Effect in Pashtoon Patients with Helicobacter Pylori Infections in Pakistan
Background & Objective: H. pylori cause one of the most widespread and prevalent bacterial infection as the H. pylori resists the acidic environment of human stomach, so difficult to treat and eradicate. Treatment regiment contains multiple antibiotics, during therapy, multiple adverse drugs effect arises in patients with H. pylori infections. The current study was aimed to measure such effects in Pashtoon patients of our area.

Study design & setting: This Cross-sectional study was conducted in one (01) year period i.e., from January 2020 to December 2020 at District Headquarter Teaching Hospital, Bannu.

Conclusion: Multiple antibiotics like amoxicillin, Clarithromycin/metronidazole along with proton pump inhibitor like omeprazole showed effectiveness against H. pylori eradication but most patients suffered adverse drugs effects. Our study showed that un-employed married females and patients living in urban area are more likely to suffer the adverse drugs effects than the others.

Helicobacter pylori being Gram-negative bacilli first isolated by Warren and Marshall in 1983 [1], has the ability to colonize stomach lumen of humans by its resistance to high acidic environment of stomach, cause the most widespread and prevalent bacterial infection that approximately infect two third of world population [2]. Helicobacter pylori is transmitted by the ingestion of bacilli and acquired orally within close contact families in childhood [3]. Colonization of these bacilli and if remain untreated induce chronic inflammation of underlying lumen mucosal surface and leads to prominent stomach abnormalities that include gastritis, peptic ulcer, gastric cancer and mucosal-associated lymph tissue lymphoma mostly account for upper gastrointestinal diseases [4,5].

World health organization recognize and categorize Helicobacter pylori bacilli as Class I carcinogenic bacterium of human beings that is most common in developing countries and mostly the infection occurs at early stage of life likely childhood but the majority of patients with infection does not have any clear clinically significant complications [6,7].

Several methodologies can be adopted for diagnosis of Helicobacter pylori beside common sign and symptoms; most commonly used methods are invasive and non-invasive methods. Invasive methods include endoscopy and biopsy for histological examination and non-invasive methods include serological, stool antigen test, urea breath test and molecular detection of Helicobacter pylori in samples from suspected patients [8], the common and easy to approach method considered to be non-expensive and accurate is non-invasive methods to be adopted [9]. Stool antigen test has been approved by United States Food and Drug Administration for detecting H. pylori before and after the therapy. Post treatment therapy antigen detection by SAT is growing in importance.
MATERIALS AND METHODS
RESULTS 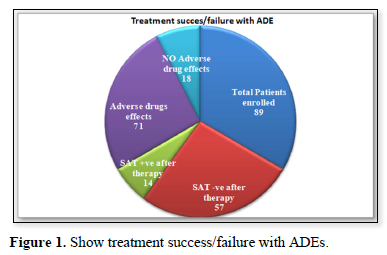 In the current study treatment outcomes reported on account of combine triple therapy for 14 days with regiment’s amoxicillin, Clarithromycin/metronidazole/PPI was quite much impressive, total patients 71(78%) has completed the combine triple therapy, amongst 71 patients, treatment outcomes with eradication checked by stool antigen test were 57(80.2%) similar to another study findings which were 78% [13], while treatment failure with no eradication was 14(19.8%). 14 days treatment with triple therapy was effective against H. pylori infection and our results were comparable to a study showed 87% successful eradication [14]. Adverse drugs effects reported by patients was 71 (79.7% n=89) while 18 (20.3% n=71) does not show ADEs. These ADEs were mild with no such serious condition of patients, most common effects recorded were 32.39% GI discomfort, constipation & diarrhea (16.90%), headache with nausea (16.3%), Anorexia 9.85% and fatigue/lethargy was (8.45 %) that match approximately the findings of Shakya [15] and Lee [16]. In another study by Masjedizadeh [15] the ADE reported was 76% approximately same as ours study which was 79.7% [17].

Our study uncovers patients with adverse drugs effects were more females (39/71, 54.92%) as compare to male (32/71, 45.07%), male to female ratio was 1:1.2, this might be due to differences in male to female physiological and anatomical figures like obesity and organ size that leads to more female as compare to male as like the other study [11,18] although no difference was made and was given the same dose to both genders. Mostly patients living in Urban area (44/71, 61.97%) as compare rural area (27/71, 38.02%) report adverse drugs effect as like the study of Gebeyehu [19]. In our study majority of patients with ADE were under the age of 45, Young married and unemployed adult patients report more adverse drugs effects than elderly patients that might be difference in physiological factors like marital status, excessive work conditions, socio-demographic differences etc.

Patients with long interval of meal at day time feel more pain and report ADE as compare to patients who report pain after the meal or during meal, our findings was comparable with the study of Sousa et al., 2018 which also reported more ADE during long interval of meals [20]. Stool antigen test was considered more effective while checking the eradication of H. pylori after treatment, in our study both prior to therapy and after treatment completion stool antigen test were performed that fully support our study.

Multiple antibiotics like amoxicillin, Clarithromycin/metronidazole along with proton pump inhibitor like omeprazole are effective against H. pylori eradication from infected individuals but most patients suffer adverse drugs effects that needs to be addressed beside the therapy. Overall eradication & treatment success was impressive. Married females, who are un-employed and patients living in urban area are more likely to be subjected to adverse drugs effect. Noninvasive method like Stool antigen test might be employed at every health facility prior to and after the treatment.

There was no conflict of interest.