Research Article
HPLC Determination of Atenolol, Losartan and Candesartan in Their Bulk and Dosage Forms and in Presence of Candesartan Degradation Products
Simple and sensitive HPLC method is described for rapid simultaneous separation and determination of atenolol, losartan and candesartan in presence of degradation products of candesartan. The separation was carried out on Hypersil® gold C18 column using a mobile phase of acetonitrile: potassium dihydrogen orthophosphate buffer adjusted to pH 3.60 by orthophosphoric acid (65: 35, v/v). The flow rate was 1 mL/min and the detection wavelength was set at 225 nm. Linearity range was observed from 5-50 μg/mL for the three drugs. Degradation products of candesartan produced as a result of stress studies did not interfere with the detection of atenolol, losartan and candesartan and the assay can thus be considered further stability-indicating study. The method was validated according to ICH guidelines and applied for the determination of drugs in both bulk and tablet forms. Results were statistically compared with reference methods and no significant difference was observed.

To the best of our knowledge, there is no method that has been reported for the simultaneous chromatographic separation of the three drugs despite their synergistic action. As such, the present work introduces a simple, rapid, reproducible and sensitive chromatographic method that has been established and validated for the determination of the antihypertensive mixture in their pure forms and in their tablet dosage form according to ICH guidelines [20]. 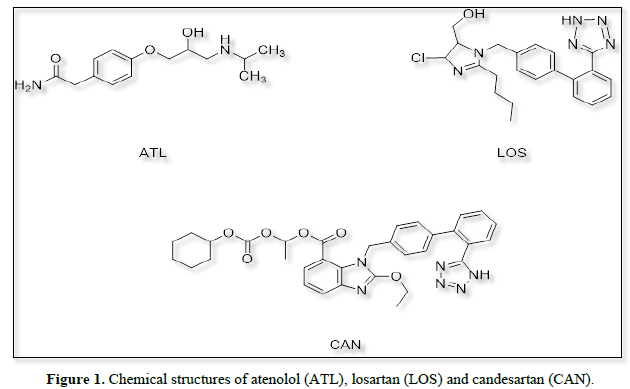 Stock solutions of ATL, LOS and CAN (500 µg/ mL) were prepared by dissolving 50 mg of each drug in 100 mL methanol in volumetric flasks.

Working solutions were prepared immediately before use by further dilutions of the stock solutions with methanol, to cover the concentration range from (5-50 µg/mL) for each drug. Detection was performed at wavelength 225 nm. The calibration graph was constructed by plotting the peak areas obtained versus the corresponding injected concentrations.

The synthetic laboratory mixture was prepared by transferring aliquots of each standard solution of ATL, LOS and CAN (50 µg/mL) to a series of 10 mL volumetric flasks, beside to adding 20 µg/mL of acid or H2O2 degradation products of CAN and completing to 10 mL with the mobile phase.

Preparation and analysis of pharmaceutical preparations

20 tablets of Ateno®, Cozaar® and Candalkan® were weighed and powdered. An accurately amount of the powder equivalent to (50 mg) of each drug was dissolved in 15 mL of the mobile phase, filtered, washed and collected into 25 mL measuring flask and completed to volume with the mobile phase. Working solutions were prepared as in the above procedure and completed as previously mentioned under the general procedure.

All chromatographic conditions are illustrated in Table 1. The chromatographic detection was performed at 225 nm using Surveyor photodiode array detector (PDA) (Thermo Scientific Co. USA). The method was performed on a Hypersil® gold C18 (10 um, 100 x 4.60 mm) column (Thermo Scientific Co. USA). It was observed that when a combination of all the three drugs was injected, CAN gave peak at far retention time. Chromatographic conditions were optimized by changing the mobile phase composition, buffers used in the mobile phase, pH and flow rate. The optimized mobile phase was determined as a mixture of acetonitrile: potassium dihydrogen phosphate adjusted to pH 3.60 using orthophosphoric acid at a flow rate of 1 mL/min. Under these conditions, ATL, LOS and CAN were simultaneously eluted at 1.80, 2.68 and 6.33 min, respectively, with a total run time of 8 min as seen in Figure 2A. Also, a typical chromatogram for simultaneous estimation of the three drugs obtained by using the aforementioned mobile phase is illustrated in Figure 2B for drug mixture in tablets formulation. Furthermore, the method was successful in determination of the three drugs in presence of degradation products of CAN either under acid hydrolysis or oxidation stress as seen in Figures 3A & 3B.

The method was validated according to international conference on harmonization (ICH) guidelines [20].

Six different concentrations of a mixture of all three drugs were prepared for linearity studies. The response was measured as peak area. The calibration curves obtained by plotting peak area against concentration showed linearity in the concentration range of 5 -50 µg/mL in case of the three drugs. Linear regression equations of ATL, LOS and CAN were found to be y = 30760x + 97923, y = 46951x + 43943 and y = 83328x -89615, respectively and the regression coefficient values (r) were found to be 0.9996, 0.9999 and 0.9997, respectively indicating a high degree of linearity for all drugs. The calibration graph was described by the following equation:

The accuracy of the method was determined by investigating the recovery of drugs at 5 concentration levels covering the specified range (three replicates of each concentration). Standard addition method was used for determination of ATL, LOS and CAN in ateno®, cozaar® and candalkan® tablets and the results showed excellent recoveries (99.79 - 99.89%) as seen in Table 3.

Intra - day precision was evaluated by calculating standard deviation (SD) of five replicate determinations using the same solution containing pure drugs. Results in Table 4 show that SD values (0.246 - 1.826) revealed the high precision of the method. For inter - day reproducibility on a day - to - day basis, a series was run, in which the standard drug solutions were analyzed each for five days where SD values were also in the acceptable range (0.375 - 1.750) as seen in Table 4. 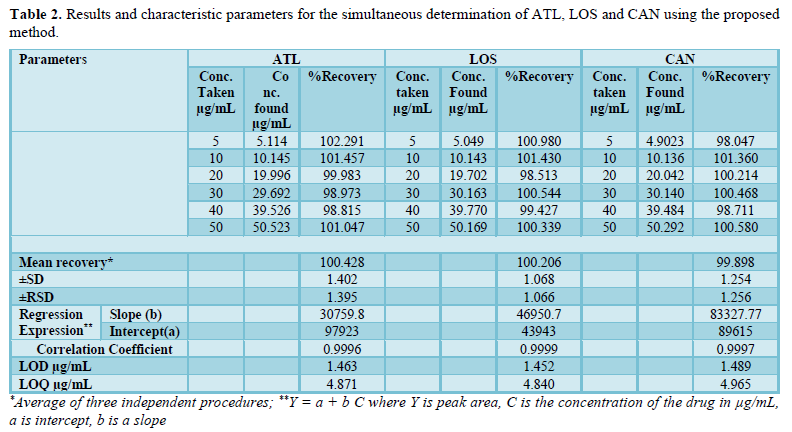 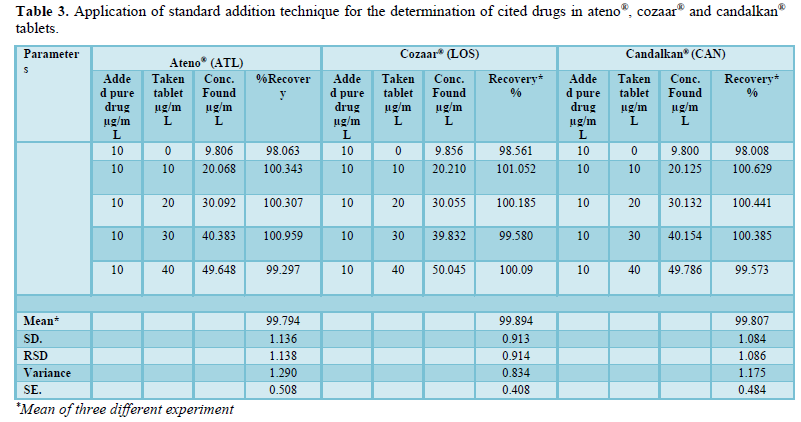 The specificity studies revealed the absence of any excipient or impurity interference, since none of the peaks appeared at the same retention time of ATL, LOS and CAN as shown in Figures 2B and 3. For example, acid degradation products of CAN at 3.70 and 5.10 min, in addition to oxidation degradation products of CAN at 3.58 and 5.00 min were clearly resolved from peaks of the three drugs indicating the high specificity of the method.

For determining the limit of detection (LOD) and limit of quantitation (LOQ), the method based on signal - to - noise ratio (3:1 for LOD & 10:1 for LOQ) was adopted. The limit

The robustness of the method was evaluated by making small changes in one parameter keeping the other chromatographic conditions constant such as the flow rate (0.90, 1, and 1.10), mobile phase ratio and pH of mobile phase within a range of ± 0.10 unit of the optimized pH where the effect of the changes was studied on the percent recovery of drugs. The changes had negligible influence on the results as revealed by small SD (≤ 1.065) as shown in Table 5.

The validated HPLC method was applied for the simultaneous determination of ATL, LOS and CAN in individual pharmaceutical mixtures. Results obtained were compared to those obtained by applying reported reference methods [22-24] where Student’s t-test and F-test were performed for comparison. It was found that the calculated t and F values were less than tabulated ones for the four drugs (Table 6) which in turn indicate that there is no significant difference between proposed method and reference ones relative to precision and accuracy.

HPLC method for rapid simultaneous estimation of atenolol, losartan and candesartan in presence of candesartan degradation products within 8 min was developed and validated. The amounts obtained by the proposed method are between the acceptable range of 99.898 and 100.428%, The results obtained indicate that the proposed method is rapid, accurate, selective, and reproducible. Linearity was observed over a concentration range of 5 to 50 µg/mL for all the three drugs. The method has been successfully applied for the analysis of marketed tablets. It can be used for the routine analysis of formulations containing any one of the above drugs or their combinations without any alteration in the assay.

Authors are thankful to the whole staff member at Medicinal Chemistry Department, Faculty of pharmacy, Zagazig University for providing facility to carry out the research work. 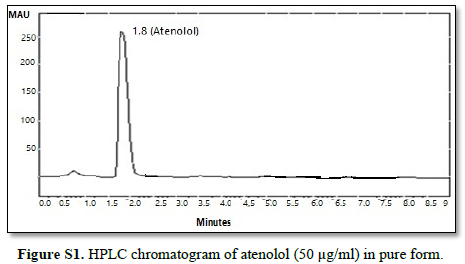 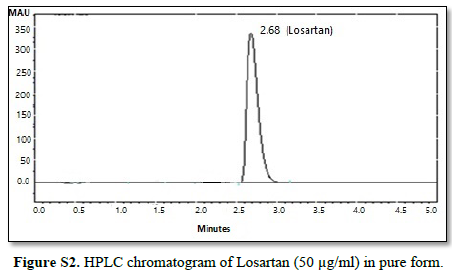 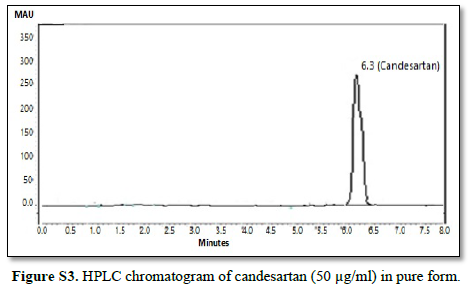