Review Article
Central Venous Catheter Placement in Neonates
Ultrasound guidance nowadays permits the percutaneous, peri clavicular placement of relatively large bore central venous catheters, even in extremely small weight infants. Such catheters also enable hemostatic and hemodynamic monitoring, and high flow infusions in this age group and could thus have an impact on morbidity and mortality. The most popular central venous access has been the out-of-plane cannulation of the internal jugular vein so far. However, as opposed to the internal jugular vein the supraclavicular, in-plane cannulation of the non-collaptic brachiocephalic vein displays the needle /IV cannula insertion over the entire distance including the surrounding structures making it most likely the most appropriate central venous access for these patients.

The most frequently used central venous lines in newborns are small bore, peripherally inserted central catheters (ECC, epicutaneo-central catheter) without the option of any hemodynamic and hemostatic monitoring. Ultrasound guidance (USG) nowadays permits the peri clavicular placement (CICC, centrally inserted central catheter) of 2-4 French size catheters in babies down to a weight of 350g also enabling high flow infusions perioperatively and reducing thus maybe perioperative morbidity and mortality [1-5]. In addition, such non-tunneled catheters can remain in place for up to 5-6 weeks, and if used consistently in the intensive care treatment e.g., for obtaining blood samples they could also improve the neurocognitive outcome by avoiding many painful stimuli reducing stress significantly [6-8].

Traditionally used landmark based and surgical cutdown techniques must now be regarded as obsolete due to significant short- and long-term complications [9-12]. Umbilical venous catheters carry a high risk of infective and mechanical complications, and are therefore usually removed after one week [1,13].

INSERTION BUNDLE AS PROPOSED FOR CICCS IN NEONATES (www.gavecelt.it; WoCoVa Foundation)
Initial vein cannulation as in our practice by using a 25-mm, 22-gauge, and in case the infant weighs less than
1.5 kg a 20-mm, 24-gauge i.v. cannula (Jelco; Smiths Medical International Ltd., Rossendale, United Kingdom) whereas for the initial puncture of the IJV a 22-gauge needle with an attached 2ml syringe is being used because of the vein’s collapse by the needle approach (Vygon GmbH&Co.KG; Aachen, Germany)
To mention though, the evidence for most of these measures is poor. Most operators still use radiography for the catheter tip location, and the author of this article estimates the correct insertion length of brachiocephalic venous catheters beforehand by calculating cm = height in cm/10 for the left BCV, and cm = height/10 - 1 for the right BCV. The author also still sutures non-tunneled catheters in preterm infants.

The IJV is popular because it is large and easy to scan, however, it is mobile and collaptic. Internal jugular venous catheters have been associated with a high risk of catheter related infection and obstruction due to kinking [14-16]. A low out-of-plane (OOP) approach aiming at the short-axis view of the IJV is the method of choice for cannulation. Recently Liu et al described a combined short- and long-axis method for internal jugular vein catheterization in premature newborns. While holding the probe in one hand, the 22-gauge needle with an attached 2ml syringe is maneuvered with the other hand as in our practice (Figure 1). It may make sense in very premature infants that the venipuncture is initiated by traversing the tip of the needle through the vein centrally via an OOP approach without applying negative pressure to the syringe (Figure 1) [17,4]. The needle is then slowly withdrawn while applying gentle negative pressure until good blood aspiration is obtained. According to the Seldinger technique the guide-wire is then introduced and eventually the central venous catheter. When using this low approach to the IJV the catheter can also be fixed on the shoulder of the baby. Alternatively, an ultrasound-guided short-axis dynamic needle tip positioning (DNTP) OOP technique has also been described in term neonates, making the insertion of the needle tip better visible. However, this technique requires a high level of skill [18].

The SCV is non-collaptic. The US probe is placed in the supraclavicular area across the clavicle so as to obtain an optimum long-axis view of the SCV. The most significant disadvantages of this approach are the hampered sonographic view of the SCV due to the US shadow by the clavicle and the small size of the SCV [20,21] (Figure 2). Using the IP (in-plane) approach the needle/IV cannula is inserted from lateral to medial. As soon as the needle reappears sonographically after passing the US shadow of the clavicle it is guided into the lumen of the SCV under real-time USG. Spontaneous blood reflux or positive blood aspiration is followed by using Seldinger technique.

Supplemental Digital Content 1, which demonstrates the supraclavicular ultrasound-guided in-plane cannulation of the left BCV in a 650g neonate. The BCV is large, non-collaptic, and without hampered sonographic view. By placing the ultrasound probe in the supraclavicular region an optimum long axis view of the BCV is obtained (Figure 3).

While holding the US transducer in one hand, the IV cannula is maneuvered by the other hand. Using the IP approach, the IV cannula is advanced from lateral to medial under the US transducer. The tip of the IV cannula is then guided under real-time USG into the BCV (Figure 3). This requires a perfect alignment of probe, vessel, and cannula. If the advancement of the cannula cannot be seen on the screen (more frequently observed for the right BCV due its steep caudad course) the author advises to move the cannula in-plane towards the clavicle until it can be recognized on the screen (Figure 4). As soon as the cannula tip appears inside the vein with or even without spontaneous blood reflux the ultrasound probe is turned aside. The stylet of the IV cannula is slightly withdrawn and the cannula fully slided into the vein. A syringe is attached, and blood aspirated. If blood cannot be aspirated because of the cannula tip abutting the wall of the tiny vessel as frequently observed in babies weighing less than 1kg, the cannula is slowly withdrawn under gentle negative pressure via the attached syringe until blood can be aspirated. If blood can still not be aspirated, the cannulation procedure is repeated from the start by piercing the skin again lateral to the long axis of the repositioned ultrasound probe. Positive blood aspiration is followed by Seldinger technique with guide-wire and catheter insertion (Figure 5). Noteworthy, the left BCV is usually easier to cannulate than the right one. The reason for this is the different anatomy. The left BCV runs nearly horizontally whereas the right one often takes a steep caudad direction [23]. At times the optimum obtainable sonographic view of the right BCV only shows a circular appearance of the vein, presenting just the initial part without demonstrating its path caudally alongside the pleura because the right BCV quickly disappears behind the sternoclavicular joint [23,22,4]. In this case, the in-plane cannulation can be expected to be particularly difficult or maybe even impossible. So, it can be said that the sonographic appearance of the right BCV prior to cannulation already predicts the cannulation difficulty demonstrating the importance of RaCeVa (Figure 6). 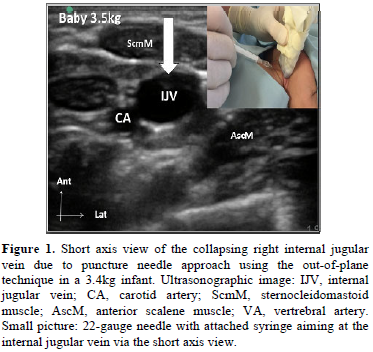 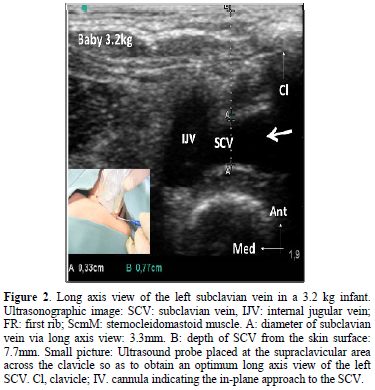 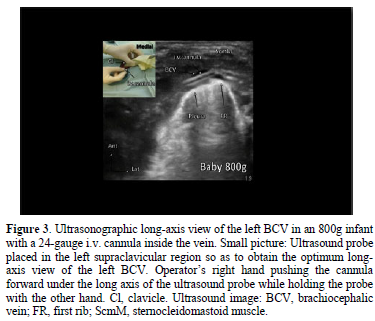 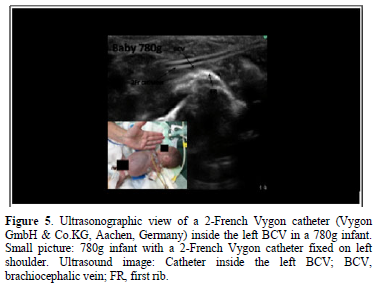 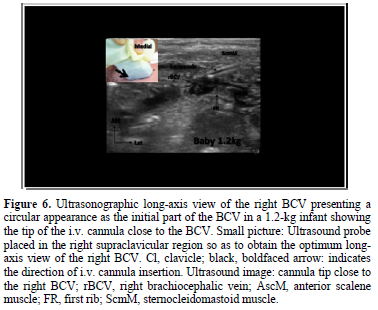 A towel is folded and placed under the pelvic region to eliminate any inward flexion of the hips or concavity to the area. The US probe is placed so as to obtain a good short-axis view of the femoral vein. By using usually an OOP technique which can also include a DNTP technique the needle is inserted into the vein. After successful puncture of the vein Seldinger technique is applied. Femoral venous cannulations can be difficult in neonates because of the small size of the vein, its collapse, and the narrow angle making sometimes the insertion of the guide-wire difficult. High catheter related obstruction, infection, and thrombosis rates have been described, however, recently Ostroff [26] has reported the successful long-term use of tunneled femoral venous catheters in neonates [15,25].

Due to the meticulous use of real-time USG cannulation techniques including a proper training in this field fatal puncture complications should not occur any more. Inadvertent arterial injuries are now reported to be below 1% [1-3]. Likewise, by applying the previously mentioned insertion bundles, long term complications in particular catheter related infections, and thrombosis should also be avoided nearly completely. However, it has to be said that catheter dwell time, small size of the veins, and overall extreme fragility of these babies will remain constant risk factors for complications. Apart from this ultrasound has also become the first choice to diagnose/exclude pneumothorax, pericardial effusion, and thrombotic events [27]. The latter one must not be confounded with the harmless fibroelastic sheaths frequently detected in vessels after catheter removal.

The most appropriate access in neonates seems to be the supraclavicular, USG in-plane cannulation of the BCV. By using the insertion bundles meticulously fatal catheter complications should not occur any more.