According to consensus, pulpal and periodontal inflammation forms impermanence to existence of tooth in oral cavity. The success of treatment in managing both inflammations warrant appropriate diagnosis through clinical and radiographic investigations. Simring and Goldberg were pioneers in establishing relationship between pulp and periodontium. Primary etiology for pulpal and periodontal inflammation is bacteria. Literature suggests numerous pathways for these bacteria to travel between root canal and peridontium. The routes are through anatomic extensions (apical foramen, lateral and accessory canal, dentinal tubules and grooves) and non-physiologic pathways (vertical root fractures and iatrogenic perforation) thus forming mutual highway for spread of infection to each other [1]. It forms the most intractable and complex problem in clinical practice.

A desired success can be obtained in these endo perio lesions by a combined endo perio therapy. However, extent of the lesion and amount of bone loss in periodontium affects the long-term prognosis of the treatment [2]. The treatment decision of endo perio cases is dependent on the vitality of the tooth. Primary endodontic cases are entirely healed by endodontic therapy, while those cases involving necrotic teeth and periodontal attachment loss needs supplementary periodontal therapy. Proposed treatment modality includes open flap debridement, root surface modifications and bone graft and GTR (Guided Tissue Regeneration) [3].

The present case report shows the protocol for diagnosis and management of endo perio lesion present.

A 38-year-old male with noncontributory medical history presented to Department of Conservative Dentistry and Endodontics with history of dull intermittent pain in both upper and lower left back region of jaw for two months.

The clinical examination revealed periodontal pocket measuring 4mm distobuccally and 8 mm pocket distolingually with tooth 26 and 5mm pocket distobuccally with 36. Bleeding on probing was observed with both the teeth at distal aspect. No mobility was recorded with both teeth. Both teeth were non vital when tested with electric pulp test. Rest all dentition had normal periodontium. Radiographic examination revealed vertical bone loss till apex of distobuccal root of 26 (Figure 1) and vertical bone loss till apex of distal root of 36 (Figure 2). 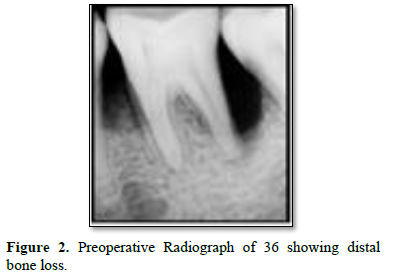 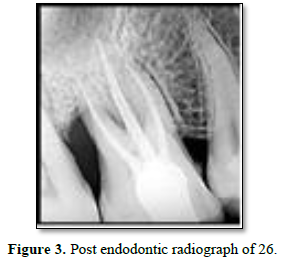 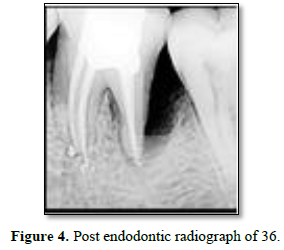 Diagnosis was Primary periodontal with secondary endodontic involvement with 26 and 36. The treatment plan devised was emergency endodontic therapy for 26 and 36. Phase 1: periodontal therapy involving oral prophylaxis. Evaluation phase after one week. Phase 2: shaping and cleaning and obturation with 26 and 36. Open flap debridement and Guided tissue regeneration procedure attempted. Phase 3: Post obturation restoration with both the teeth. Phase 4: recall appointment and radiographic follow up.

In the present case report, emergency access opening was done under 2% lignocaine with adrenaline anesthesia under rubber dam for 26 and 36. Glide path filing was done till #10 K file till working length and access cavity was sealed with cavity.  Phase 1 periodontal therapy of oral prophylaxis was instituted. After 1 week recall. Teeth were again opened under rubber dam and shaping and cleaning was done till rotary Protaper F1 under 5% sodium hypochlorite irrigation. Intracanal medicament of Calcium hydroxide was placed in canals and access was sealed and patient recalled after 1 week. Follow up appointment showed resolution of sign and symptoms; hence teeth were obturated with gutta percha and sealer (Figures 3 and 4).

After 3 weeks of assessment, periodontal pocket was present on distal aspect of 26 and 36 (Figures 5 and 6). A full thickness mucoperiosteal flap was raised with respect to 25, 26, 27. The area was thoroughly debrided using hand curettes and ultrasonic scaler (Figure 7). Demineralized freeze-dried bone allograft was placed in relation to distal aspect of 26 (Figure 8). 10 ml of intravenous blood was collected in sterile tube and centrifuged to obtain the fibrin clot which was place on sterile dampen dish. Plasma Rich Fibrin Membrane (PRF) was placed to cover the graft (Figure 9) and simple interrupted suture were placed. Post-operative medications and instructions were given and patient was recalled after 7 days. Similar procedure was carried out for 36 after ten days (Figures 10-12). Patients were recalled after one week of surgical procedure for removal of sutures and evaluation of healing. Six-month recalls were scheduled for follow-ups. Radiograph was taken to assess the bone healing (Figures 13 and 14). 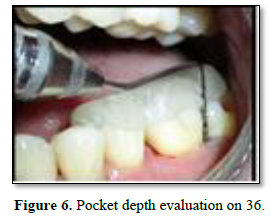 obtaining the impervious seal of the porous pathways for preventing ingress of bacteria. This should be followed by regenerative periodontal therapy. The primary goal of periodontal treatment is to remove necrotic tissue and toxins from the surgical site and promote regeneration of attachment apparatus [4]. In present case the established 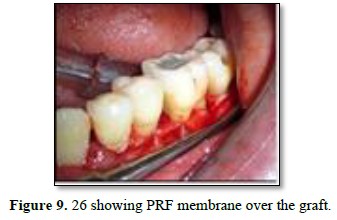 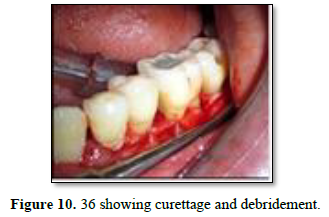 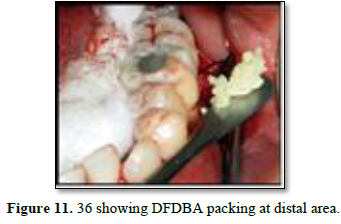 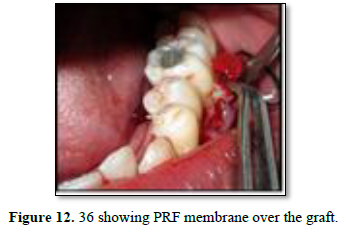 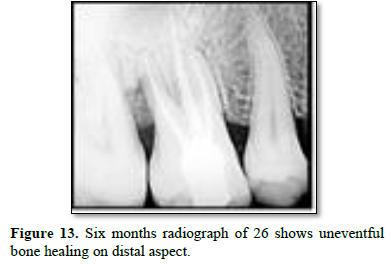 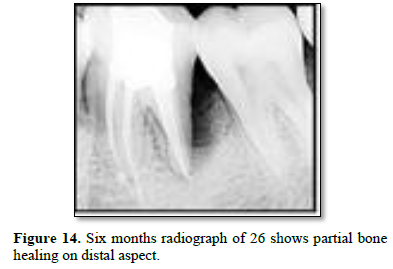 Distal aspect of 26 and 36 presented bone loss right up till the apex of the closest root. This would have led to necrosis of the teeth. Complete curettage after flap reflection resulted in smooth surface of cementum. DFDBA was used as a graft material due to its osteoinductive nature. Studies have shown promising results in repair of furacation and periodontal defects. It also has ability to stimulate cell attachment and cell migration and osteogenesis [5]. Plasma rich fibrin membrane was used as a barrier to prevent formation of long junctional epithelium. It has growth factors and act as a matrix for migration of endothelial cells and fibroblast thus promoting angiogenesis and also promotes formation of more resistant connective tissue [6]. Six months follow up radiograph shows optimum bone formation with distobuccal root of 26 and partial bone formation with distal root of 36 suggestive of healing lesion. There was also reduction in probing pocket depth and gingival healing. Similar findings were reported by George PM in 2017 with use of Osseo graft in endo-perio lesion. Six months follow up revealed improved clinical and radiographic findings [2].

The management of primary periodontal secondary endodontic lesion begins from accurate diagnosis. The treatment goal is to remove infected tissue from root canal and surrounding periodontium by endodontic and surgical periodontal therapy. Bone grafting with DFDBA and PRF have shown promising results in reduction of probing pocket depth and promote periodontal healing.