Students from all over the world tend to experience test anxiety at some point of their life. In India, a large number of students tend to experience test anxiety, especially during Board examinations, because academic performance is highly valued among families and societies in the country and after the board examinations, high school students have to make crucial decisions regarding their college courses and careers. Most people believe that test anxiety only occurs when the individual is taking a test. But it is very common for the students to experience similar symptoms prior to and hours or even days before taking the test. Students experiencing test anxiety complain of symptoms such as headache, upset stomach, sweating, shortness of breath, pacing or fidgeting and crying. They also have a lot of negative thoughts related to their performance, such as “I am going to fail”, “I will not remember anything”. According to Birenbaum and Nasser [1], test anxiety is one of the factors that disrupts performance in school and other settings where testing takes place. Shaked [2] estimated that more than 30% of the students experience various levels of test anxiety. According to Hong [3] test anxiety is a complex multidimensional construct that involves cognitive, affective, physiological and behavioral reactions to evaluative situations.  Researchers found that high school students tend to experience a high level of anxiety, especially boys which might affect their academic performance [4,5].

Student’s Work engagement is defined as a positive, fulfilling, state of mind which is characterized by vigor, dedication and absorption in one’s studies [6,7]. On the whole, work engagement is about how the students experience their studies as stimulating, energetic and something to which they really want to devote time for meaningful pursuit by putting in their full concentration and effort.

Student’s work engagement in school and class assignments consist of three dimensions, they are: Vigor, Dedication and Absorption. Vigor is defined by high levels of energy and mental resilience while studying, the willingness to invest effort in one studies and persistence even in the face of difficulties [7]. Dedication is characterized by being strongly involved in one’s studies and experiencing essential enthusiasm, inspiration, pride and challenge. This means the students apply themselves to their classes enthusiastically and finding their work meaningful. Absorption is defined by being fully concentrated and happily engrossed in one's studies whereby time passes quickly and one has difficulty in detaching oneself from their studies [8].

Martin and Marsh [9] defined academic buoyancy as the student’s capacity to successfully overcome setbacks and challenges that are typical in the course of everyday academic life such as poor performance, performance pressure, receiving negative feedback on a piece of work, competing deadlines etc. [10]. Martin and Marsh [9] describe academic buoyancy as an important factor that assists students to deal with academic risks and difficulties especially the risks and difficulties that occur relatively frequently and on an ongoing and daily basis. Putwain [11] investigated whether academic buoyancy is related to examination performance and found that academic buoyancy predicted higher mean score in the GCSE examinations. Putwain [12] reported that higher resilience was found to predict higher test scores and lower test anxiety.

OBJECTIVES OF THE STUDY

The objectives of the study were:

The convenient sampling method was used in the present study. The sample consisted of 240 high school students, from four schools in Chennai city.  120 were male and 120 were female high school students studying in grades 10, 11 and 12. The researcher obtained permission from principals of the schools to conduct the study. The purpose of the study was explained to the principals and the students. Before initiating the study, informed consent was taken verbally from the students.  The tools were self-administered. Appropriate instructions were given in the beginning of the tools about how to respond to the items in the questionnaires. Confidentiality of responses was assured to the students. The students answered the questionnaires in their school and returned it to the researchers.

Test anxiety of the students was assessed using the Westside Test Anxiety Scale which was developed by Driscoll [13].  It consists of 10 items. This scale was designed to measure the anxiety levels that interfere with performance during examinations. The internal consistency of the West Side Test Anxiety Scale is high, with Cronbach’s alpha ranging 0.89. The scale has good face validity and content validity.

The work engagement of the student was assessed using the Utrecht Work Engagement Scale-Student Forms. The short UWES-SF form was developed by Schaufeli and Bakker [14]. It consists of 9 items that measure student’s engagement in the school and in class assignments. It has three subscales Vigor, Dedication and Absorption, each subscale has 3 items each. The internal consistency coefficients for the subscales of the short UWES-SF form are .73, .76 and .70 respectively and the coefficient for the total scale is .84.

The correlation coefficient between work engagement and test anxiety was significant, r (238) = -0.190, p(Table 1). This indicates that there was a significant negative relationship between work engagement and test anxiety among high school students. This seems to indicate that as work engagement decreases the test anxiety increases. Students who are less engaged in their school tend to experience high test anxiety. Students who were not willing to invest effort in their studies tend to experience anxiety symptoms such as fear of failure, feelings of inadequacy, and poor concentration during exams. Similar findings were reported by Raufelder [17] who found that there was a significant relationship between test anxiety and school engagement for both boys and girls, even though the girls reported higher inhibitory anxiety than boys.

The correlation coefficient between academic buoyancy and test anxiety was significant, r (238) =-0.251, p

The correlation coefficient between work engagement and academic buoyancy was significant, r (238) = 0.239, p 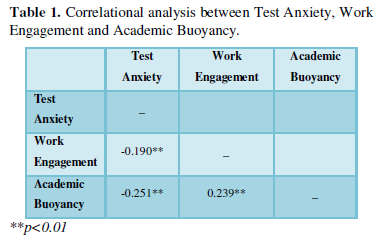 There was a significant difference in academic buoyancy among male and female high school students.

IMPLICATIONS OF THE STUDY

From this study it is evident that test anxiety affects the student’s engagement to their studies and their ability to overcome minor setbacks and challenges that occur in the everyday academic life. The students can be given some kind of psychoeducation about the effects of test anxiety in their performance as well as their life. Thus, interventions such as relaxation techniques can be given to the students to help them deal with their test anxiety [27-36].

It is also evident that there is a relationship between work engagement and academic buoyancy. The students can be given training to identify and record their strengths. This training can promote positive attitudes towards their studies and can improve their performance. The students can be given intervention to improve their academic buoyancy which could also yield beneficial results for examination performance.

LIMITATIONS OF THE STUDY