Research Article
The Role of an Early Maintenance Treatment in Bipolar Disorder: The Experience at San Raffaele Hospital Mood Disorder Center in Milan
Background: We previously reported that beginning lithium therapy within the first ten years of illness predicts better preventive outcomes than beginning it later in a mixed sample of patients affected by Major Depressive Disorder and Bipolar Disorder (BD). In this study, we aimed at replicating these results in BD, and evaluating clinical markers that may be associated with the response to stabilization therapy.

Methods: Two hundred fourteen BD subjects receiving stabilization therapy (lithium, anticonvulsants, or antipsychotics) were studied. Clinical data were collected using NIMH Life Chart method. We divided the sample into three groups, according to the initiation time of maintenance treatment. The outcome of preventive therapy was evaluated calculating the gradient between the recurrence index before and after starting the treatment. Data were analyzed using multiple logistic regression analyses.

Conclusion: We confirmed the importance of an early intervention in BD: starting lithium therapy within five years from illness onset is more effective than treatments delivered later. Our data suggest that the onset time of lithium therapy can be considered as a new prognostic factor; indeed, an early onset could improve patient’s long-term prognosis, while a late onset is associated with the progression of BD. Referring to recently proposed staging models, we suggest using the time of initiation of maintenance therapy as a new parameter to stage BD patients and, therefore, to provide appropriate interventions.

Bipolar Disorder (BD) is a common, burdensome, and lifelong psychiatric disorder, causing impairment of psychosocial functioning. The World Health Organization's Global Burden of Disease Study reports BD as the sixth leading cause of years lost due to disability [1]. As new mood recurrences are experienced by the patients, the frequency and severity of episodes in the course of the disorder increases [2], while the duration of euthymic periods decreases with the increase in the number of episodes [3,4]. However, when evaluating the complexity of BD it is necessary to consider the affective dimension together with other concomitant conditions, including comorbid anxiety [5], substance abuse [6], personality disorders [7], and suicidal thoughts or behaviors [8]. With the co-occurrence of comorbidities, the patients might show a worsened clinical outcome with a chronic course of the disorder; in turn, this progression increases the risk of developing resistance to pharmacological treatments [9]. There is evidence that the chronic course of the disease can determine permanent alterations in the neuronal activity, making the patient more prone to experience recurrences, regardless of external circumstances. Indeed, according to the Kindling Hypothesis [10], the cyclic pattern of episodes appears to acquire an intrinsic autonomous rhythm with a lower impact of stressful experiences in triggering new episodes [11]. Therefore, an effective maintenance treatment is necessary to interrupt this vicious cycle and reduce the burden associated with the disorder.

The mood stabilizer lithium has been the standard pharmacological treatment for BD over the last 60 years [12]. The goal of maintenance treatment is the prevention of future mood episodes, both manic/hypomanic and depressive, or at least the decrease in the number or the intensity of episodes [13]. However, there are still disagreements in the timing of initiation of this treatment: some studies show that lithium may be more effective when administered in the early phases of BD [14,15], even though this indication is not unanimously shared [16,17].

Our previous results [14] suggested that the early beginning of lithium treatment has a good preventive effect for future relapses. We aimed at confirming those results in a BD sample, and evaluating clinical markers that may be eventually associated with the effectiveness of the maintenance therapy, improving the patient’s long-term prognosis.

The sample included 214 subjects (84 males, 130 females) affected by BD (135 type I, 79 type II). Patients were recruited from the Outpatient Center of the Mood Disorder Unit at San Raffaele Hospital in Milan, from September 2018 to July 2019.

Inclusion criteria were diagnosis of Bipolar Disorder type I or type II according to DSM-5 criteria, being in a euthymic state for at least 9 months (defined as having a 24-item Hamilton Depression Rating Scale <8 and a Young Mania Rating Scale ≤12), being under maintenance therapy (lithium, anticonvulsants, antipsychotics) for at least 6 months, and having signed written informed consent. The following demographic and clinical data were collected, according to the NIHM Life Chart method [18]: Age, sex, type of Bipolar Disorder, psychiatric comorbidities according to DSM-5, age of onset, polarity of index episode, total number of episodes, recurrence index before and after the beginning of the preventive therapy, type of maintenance therapy assumed, stressful events conditioning episodes, presence of psychotic features during the course of the disease, years of education, family history of mood disorders, number of hospitalization, current mood stabilizing therapy.

Among the patients recruited, 32 (15%) were excluded from the analysis due to lack of recollected information, poor adherence, or inadequate tolerability to maintenance therapy.

Data analysis was performed using the software STATISTICA 7.0. A p-value lower than 0.05 was considered to indicate a statistically significant difference. Clinical and demographic variables were obtained through descriptive analysis.

Table 1 and Table 2 summarize the clinical and demographic characteristics of the sample. The average time of maintenance therapy was 54 months. Seventy-seven percent (N=140) of patients were considered responsive to preventive therapy, according to a positive RI gradient, while the remaining 23% (N=42) were considered non-responders. Table 3 and Table 4 show individual RI gradients for manic and depressive episodes, with and without psychotic features, respectively in the responder and the non-responder group. 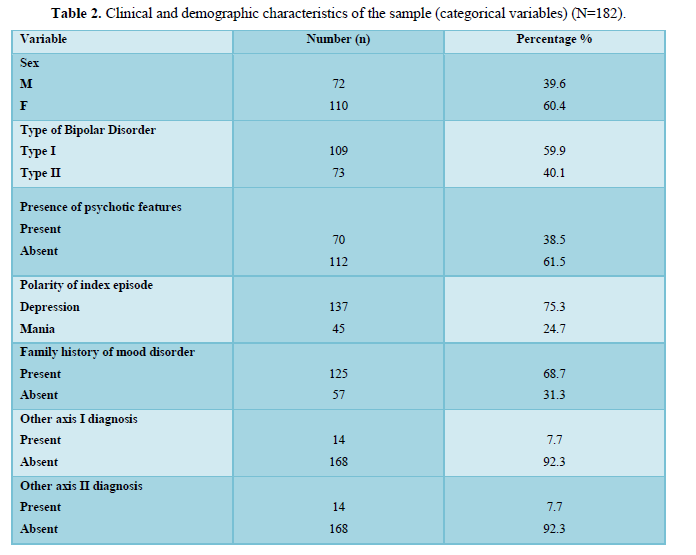 Treatment outcome, measured as RI gradient, was analyzed by logistic analyses. In the first logistic analysis on stepwise multivariate logistic regression, the “pre-treatment RI” (t=5.31; P<0.0001) and the “psychotic features during the course of the disease” (t=-2.07; P=0.03) were the only variables significantly associated with the outcome of preventive therapy. Thus, a better treatment outcome (higher gradient values) was related to an initial worse trend of the disease, with a higher recurrence index than non-responders (13.01 vs 4.08). Moreover, the group of responders showed a lower percentage of patients with a clinical history of psychotic symptoms, compared to the group of non-responders (34.3% vs 52.4%).

When a patient was considered non-responder to the maintenance treatment, a new mood stabilizer was considered, either alone or in combination. Among the non-responders included in our study (N=42), 54.8% received a new stabilizing treatment for an average period of 41 months. Sixteen patients (69.6%) responded to the new therapy.

Table 6 reports the previous and new maintenance treatment for each new responder. 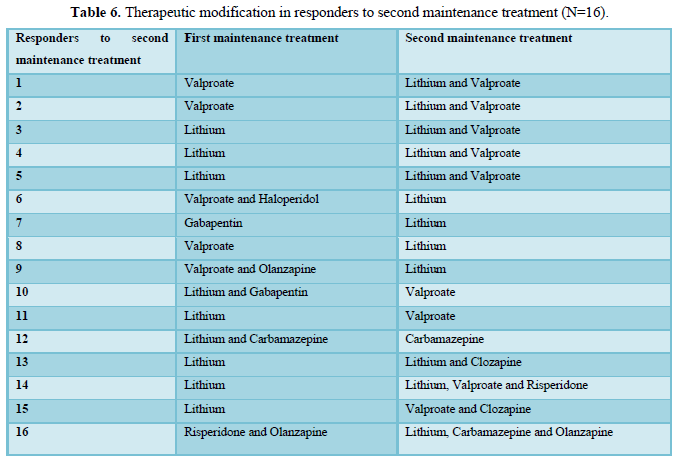 The need for maintenance therapy in BD is crucial: if depressive and manic episodes usually has a favorable prognosis, thanks to their self-limitedness and wide responsiveness to acute treatments, the risk of relapse or recurrence is very high and progressively increasing in the course of the illness. Given this clinical trend, the use of mood stabilizers is considered the gold standard as a maintenance treatment.

In our study, lithium was confirmed to be used as the first choice in the prevention of new recurrences in BD, considering that it was prescribed to 65% of the sample. Among the analyzed patients (N=182), 77% responded to the therapy, and among those receiving lithium (N=118), 80.5% achieved a favorable outcome, as indicated by a lower RI, in agreement with previous studies [19]. Besides, our results confirm that lithium fits the definition of mood stabilizers, given its ability to prevent episodes of both polarities [20,21].

More interestingly, the type of maintenance treatment significantly correlateswith the response to therapy, suggesting a different stabilizing potential for each preventive strategy. In particular, responders received more frequently lithium inmonotherapy or in combination with an anticonvulsant then non-responders; on the other hand, a significant percentage of non-responders received risperidone in monotherapy or valproate in monotherapy or in combination with an antipsychotic. Our findings are partly in line with other studies [13,22], which have found a differential effect of various stabilizing strategies concerning depressive and manic episodes. Indeed, antipsychotics and valproate showed protection against manic recurrences, but not for depressive.

Considering the timing of maintenance treatment, our main results point toward a clear role of the early initiation of any stabilizers as a predictor of response to therapy through the reduction of future recurrences, as already indicated in other studies [14,23,24]. Indeed, introducing lithium therapy within the first five years of illness is more effective than introducing it later. Referring to the recently proposed staging models for Bipolar Disorder [25,11], we suggest considering the time of initiation of the maintenance therapy as an additional parameter for staging bipolar patients adequately. More specifically, patients who received stabilizing therapy later should be included in more advanced stages, with crucial consequences in the choice of such treatment. According to the staging models, each stage comes with a progressive complexity of treatment strategies: a patient who has been without mood stabilizers for a longer period might benefit from lithium, possibly in combination with other anticonvulsants or antipsychotics [26].

Not only the total number of episodes and their frequency should be considered as prognostic factors in BD, but it is also important to address the presence of peculiar clinical features within the episodes. We observed that the presence of psychotic features during BD is a negative prognostic factor in the response to stabilizing therapy. Previous studies have already reported that more than a half of BD patients exhibit at least one psychotic episode in their lifetime [27]; it is also known that the psychotic features are observed more frequently during manic episodes, approximately in 20-50% of cases [28]. The negative prognostic impact of psychotic features has been long known. Those patients who experienced delusions or hallucinations have a worse long-term social functioning and a lower probability to achieve complete remission from the disease [29,30]. A more recent study has shown that among bipolar patients treated with lithium; those with psychotic episodes have a worse outcome with preventive therapy [31]. Consistent with previous studies, we found that the presence of psychotic features during the disease turns out to be a negative prognostic factor in the response to preventive therapy.

Some limitations should be acknowledged in our study. First, using a retrospective design, data collection of anamnestic information is not always accurate as it is based on the patients’ subjective recollection of the events. We found particularly arduous to collect the previous pharmacological history. Furthermore, the sample itself included subjects with numerous hospitalizations, both in our hospital or other clinics, representing a population with more severe clinical features and multiple pharmacological trials.

Our study confirms the importance of early pharmacological interventions in BD: the sooner the patients start stabilizing therapy, the better is for response to treatment. Particularly, initiating lithium within the first five years of illness is more effective than delivering the treatment later in the disorder.

Consequently, according to our analysis, we propose to address the time of initiation of the maintenance therapy as a new potential marker of BD progression, to enrich the staging models already proposed by [25,11]. Specifically, patients with earlier initiation of maintenance treatment should be categorized within the early stages, while patients who initiated it later should be identified in the later stages. A staging model for BD can be widely applied, making it quite useful in determining with acceptable accuracy BD prognosis and in identifying useful and specific preventive treatments for each stage.
Download PDF View PDF