Others
Adolescents: Suicide and Prevention

Adolescence is said to be the stage in a person`s life between childhood and adulthood. It is the period of human development during which an individual move from the dependency to independence, autonomy and maturity. Adolescence involves a process which extends over significant period of a person’s life. Adolescence presents many challenges as physiological, biological, psychological and social changes are confronted. According to WHO the age range of 10-19 years referred to the period of adolescence. WHO defines adolescents as person between 10-19 years of age and many studies through the world have adopted this age range as the standard the present study unless otherwise stated specifically will conform to the WHO age range of 10-19 years when referring to adolescence. The size of the adolescence population in the world commands attention: they numbered nearly 1.1 billion in 1995 of which 913 million lived in developing countries.

Countries in the Asian region represent about 60% of the world population of which 20% are adolescents. Most countries in the region are currently experiencing an increasingly larger adolescent population, although the rate of that increase is decreasing. The biological and cognitive changes which have been described not only present challenges directly, but also have a significant impact on psychological functioning. Additionally, there are major psychological challenges for the young person with regard to a central feature of adolescence which involves the formation of a new identity. The adolescent is no longer a child; a new person is emerging. The adolescent developmental stage is therefore, characterized by emotional reactivity and a high intensity of emotional response. This makes it difficult for adolescents to control and modulate their behavioral responses, which at times may be inappropriately extreme [1].

Suicide is a major public issue and mental health problem of adolescents, which demands urgent action. Although it is a deeply personal and an individual act, suicidal behavior is determined by a number of individual and social factors. Ever since Esquirol wrote that “All those who committed suicide are insane” and Durkheim proposed that suicide was an outcome of social/societal situations, the debate of individual vulnerability vs social stressors in the causation of suicide has divided our thoughts on suicide. It is best understood as a multidimensional, multifactorial malaise. Suicide is perceived as a social problem in the world and hence, mental disorder is given equal conceptual status with family conflicts, social maladjustment etc. The psychological autopsy study that focused on completed suicide and domestic violence. Poverty, unemployment, debts and educational problems are also associated with suicide. In addition to the general risk factors for suicide, adolescents are at a higher risk of suicide [2]. Adolescent suicide is a serious and growing problem. The adolescent years can be emotionally turbulent and stressful. They face pressures to succeed and fit in. They may struggle with self-esteem issues, self-doubt, and feelings of alienation. For some, this leads to suicide. Depression is also a major risk factor for adolescent suicide [1].

Some other risk factors for adolescent suicide include:
WARNING SIGNS

Some warning signs that adolescents may be considering suicide:
LEVEL OF SUICIDE RISK 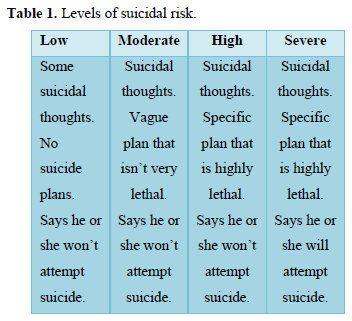 SUICIDE PREVENTION METHODS
There are some specific methods have been developed to prevent suicide. It can be assessed by qualified mental health professionals. WHO focus on reducing the risk factors and intervening prevention methods such as, psychotherapies that have shown most successful or evidence based are dialectical behavior therapy (DBT), which has shown to be helpful in reducing suicide attempts and reducing hospitalizations for suicidal ideation and cognitive behavioral therapy (CBT), which has shown to improve problem-solving and coping abilities. Beside its some methods are:
WHO was formally announced on 10th September, 2003 as World Suicide Prevention Day collaboration with the International Association for Suicide Prevention (IASP). WHO uses this day to call attention to suicide as a leading cause of premature and preventable death.

So, we can say that suicide is a multifaceted and multidimensional problem for adolescents. There is an urgent need if any suicide prevention strategy is to succeed in the prevailing system to develop and implement a national plan, which is cost-effective, appropriate and relevant to the community collaboration, coordination, cooperation and commitment. In India, suicide prevention is more of a social and public health objective than a traditional exercise in the mental health sector [1]. The time is ripe for mental health professionals to adopt proactive and leadership roles in suicide prevention and save the lives of thousands of adolescents.