Research Article
Pleural Effusion as a Complication in Patients Undergoing Coronary Artery Bypass Graft or Valve Replacement: A Population Study
Introduction: The postoperative pleural effusion (PE) is common in patients who undergo cardiac surgery. Most of these effusions develop as a consequence of the surgical procedure itself and follow a generally benign course. The characteristics of PE and the factors predisposing factors should be documented further.

Material and Methods: This retrospective study was conducted at a large private hospital in Athens. The sample of the study was all adult patients who undergo coronary artery bypass graft (CABG), or valve replacement. A special form was made to record patients’ demographic and clinical data. Descriptive statistics and correlation studies were performed with the SPSS 22.0, at significant level a=0.05.

Results: Among the 118 patients, who included in this study, 42.4% underwent CABG surgery and 29.7% underwent in valve surgery. Postoperative pleural effusion was developed in 40% of those who underwent CABG and 42.9% of those who underwent cardiac valve surgery. The mean time development of PE was 6.65 days for the CABG group and 4.8 days for the valve group. There was no statistically significant difference in the demographic and clinical data of patients with pleural effusion according the type of cardiac surgery.

Conclusions: Postoperative PE is a common complication at cardiac surgery and is more common in patients undergoing surgical recuperation of valve.

Every year, it is estimated that as least 600,000 people in the United States undergoing coronary artery bypass graft surgery, a major surgery [1]. In the period immediately after myocardial revascularization, 41% to 87% of patients present collection findings on chest X-ray [2]. However, in only 10% of patients, the collection occupies 25% of the hemithorax on X-ray [3]. Postoperative pleural effusion, therefore, is a common complication of cardiac surgery [4]. Most of these collections have been developed as a consequence of the surgical procedure itself and usually follow a benign course [5].

The aim of the present study was to assess the prevalence of pleural effusion after coronary artery by-pass graft and after valve replacement.

This is a retrospective observation study.

Criteria for inclusion of patients in the study

Patients who made up the study population had to meet the following criteria:
Exclusion criteria of patients in the study

The data collection was carried out through the study of the medical records of patients who underwent heart surgery in 2016.

For the needs of this study, the researchers developed a special recording form, which recorded demographic and clinical data.

Specifically, demographics are noted such as age, sex, body mass index and patient history, such as whether he or she was a smoker, had high blood pressure, or had chronic obstructive pulmonary disease. The type of cardiac surgery that the patient underwent, the appearance and extent/extent of pleural effusion, as well as the time of onset were also recorded. Finally, there are data on preoperative and postoperative care such as the use of anticoagulants before the surgery, the length of stay of the billau, the duration of mechanical support of the breath as well as the time of onset of mobilization postoperatively.ETHICAL CONSIDERATIONThe data collection was carried out with the written permission of the scientific council of the hospital (Approval no. 33450), as well as from the ethics committee of the medical department of the Kapodistrian University of Athens.

Also, at each stage of the present study the principles of ethics, as formulated by the International Committee of Publishers of Medical Scientific Journals and the Declaration of Helsinki, were observed.
STATISTICAL ANALYSIS

Mean and standard deviations (Standard Deviation = SD) were used to describe the quantitative variables, while the absolute (N) and relative (%) were used for the categorical variables. Quantitative variables were checked for distribution. Pearson’s χ2 test was used to compare categorical variables between the two patient groups. Variables between the groups. Student's t-test or Mann Whitney non-parametric test was used to compare quantitative variables between two groups of patients. All controls were bilateral at the level of statistical significance p <0.05. Statistical package for Social Sciences (SPSS) version22.0 was used for the analysis.RESULTSResults throughout the sampleThe majority of the sample were men at 68.6% (n=81) and with a mean age (± SD) of 68.86 (11.78) years. 42.4% (n=50) of the sample underwent coronary artery bypass grafting (CABG) and 29.6% (n=35) underwent heart valve surgery. Table 1 presents the demographic and clinical data throughout the sample. Regarding preoperative and postoperative hospitalization data, the mean duration of hospitalization (± SD) was 10.44 (± 9.73) days, the average Billau's illegal time was 2.92 (± 1.64) days, and the average mobilization time was 4.41 (± 4.45) days. 41.5% (n = 49) of the sample showed postoperative pleural effusion (Table 2). The mean time to onset of pleural effusion was 6.67 (± 4.46) days (Table 3).

Table 4 presents the demographic and clinical characteristics of the patients per cardiac surgery group, as well as the results of the comparison between the two groups. The two groups of cardiac surgery patients differed statistically significantly in the proportion of men and women (p=0.005), in the percentage of patients who smoked (p=0.021), in the percentage of patients with a history of hypertension (p = 0.009) and the percentage of patients with a history of COPD (p=0.045). Regarding the hospitalization data, there was a statistically significant difference between the two groups of patients as the use of anticoagulant therapy before surgery (p=0.029) and as the time of onset of mobilization after surgery (p=0.028). Pleural effusion was developed postoperatively by 40% of the patients of the “CABG” group and in 42.9% of the “Valve” group. 20% of the CABG group and 14.3% of the valve group patients developed postoperatively a significant degree of pleural effusion. The Kruskal Wallis test showed that there was no statistically significant difference between the three groups in the degree of pleural effusion (p = 0.901) (Figure 1). 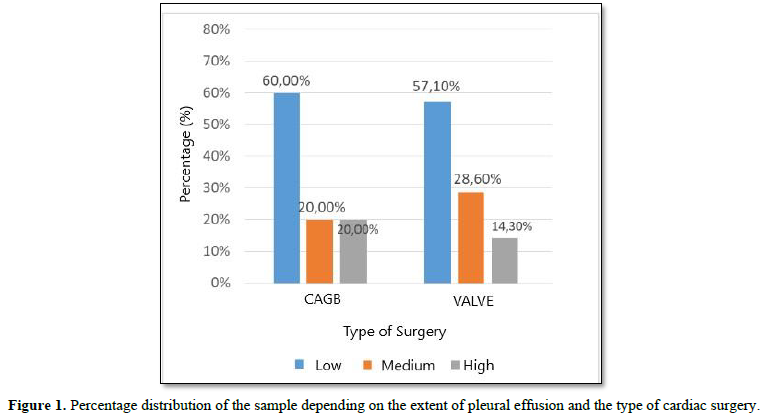 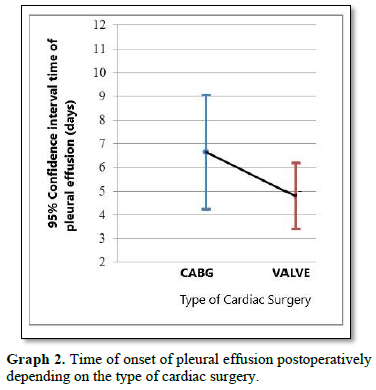 An important finding of the present study was the time of onset of pleural effusion where for CABG patients it was 6.65 days, for those who underwent Valve replacement 4.80 days [12]. Two other studies have yielded similar results. More specifically, in the study of Light [2] the time of onset of pleural effusion in the CABG group was 5 days and in the study of Labidi [13] 6.6 days in the entire sample of patients who underwent cardiac surgery.
Regarding the demographic and clinical characteristics of the patients who developed pleural effusion did not differ between the two groups. However, in two studies it was found that pleural effusion developed in older patients, while in one it was found that the proportion of women who developed pleurisy was significantly higher than the corresponding proportion of men using anticoagulant therapy before surgery [2,13,14].

LIMITATIONS OF THE STUDY

The present study included patients who underwent cardiac surgery in a single hospital and therefore the results could not be generalized. Also, the sample of patients studied was small. In addition, the occurrence of postoperative pleural effusion during the treatment of patients until discharge was assessed. Patients were not reassessed after discharge from the hospital.

The prevalence of pleural effusion did not differ significantly between the two groups of patients, however the proportion of patients who underwent valvular disease rehabilitation and developed pleural effusion was higher than those who underwent CABG and a combination of operations and developed pleural effusion, a finding contradictory to other investigations. In the future, a similar study could be carried out simultaneously in several cardiac surgery institutes to involve a larger research population, in order to improve the degree of objectivity and reliability of the research.