Conclusion: The agreement limits between Neoptimal and Neoplastine CI plus are small enough to consider that the reagent can be used interchangeably which is supported by a substantial agreement as shown by Cohen’s kappa coefficient. This is not the case for the couple Neoptimal and innovin in which the agreement limits are wider, particularly when INR values are superior to 4.5. An adjustment in anticoagulant dosage might be necessary.

It is admitted that prothrombin time is affected by thromboplastin reagent. This would be an issue for patients undergoing antivitamin K medication which needs a reliable test for its monitoring. International normalized ratio (INR) was designed in 1983 to standardize prothrombin time variations. The INR is the prothrombin time determined using a reagent with an international sensitivity index (ISI) value of one. The ISI is provided by the manufacturer and is determined by comparing their agent to international reference thromboplastin. However, several studies have shown that the INR might vary depending on the reagent/instrument combination despite using specific ISI [1-3]. Our previous study has compared side by side different combinations and has found that it is not possible to obtain the same INR although the agreement was high enough to be considered clinically acceptable [4]. Currently, new thromboplastins have appeared, and it is important to compare them to existing reagents used routinely. The aim of this study was to evaluate the agreement between INR values obtained with "NEOPTIMAL", a new thromboplastin and two other existing reagents.

Blood samples were collected from 331 patients undergoing long-term antivitamin K therapy (ACENOCOUMAROL, SINTROM® MEDIUS AG, SUISSE) over 6 days. Blood samples were drawn through venipuncture into plastic tubes containing 3.2% sodium citrate with blood/anticoagulant ratio of9/1. Plasma was obtained after centrifugation of blood samples at 2500 g/min for 10 minutes at room temperature. Assays were performed within the following 6 hr.

INR values obtained with the different combinations were grouped into four classes used in clinical practice: inferior to 2, [2-3], (3-4.5) and superior to 4.5.

Statistical analysis was performed using MedCalc statistical software (version 17.4). The agreement between the INR values obtained through the different thromboplastin/instrument combinations was analyzed using two statistical measurements. (i) The Bland-Altman plot was used when considering INR values as quantitative variables [5]. This method investigates the difference between two measurements. For each blood sample, the mean of INR values obtained with two different instrument/reagent combinations was represented as the abscissa whereas their difference was represented as the ordinate. The mean difference is the estimated bias between the two assays. The “limits of agreement” refers to the mean difference ±2standard deviations. If the differences within the limits of agreement are not clinically important, we could use the two measurement methods interchangeably. (ii) Cohen’s kappa coefficient was used when considering the INR values as qualitative variables [6]. Cohen’s kappa coefficient measures the agreement between qualitative variables. INR values were grouped into different classes. A higher agreement is represented by a value closer to one. 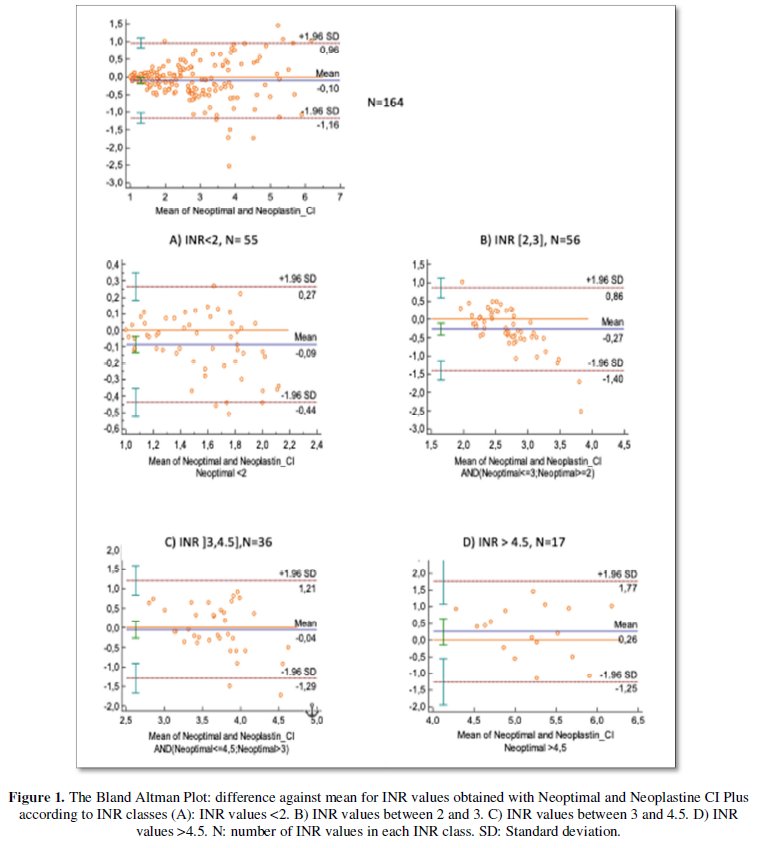 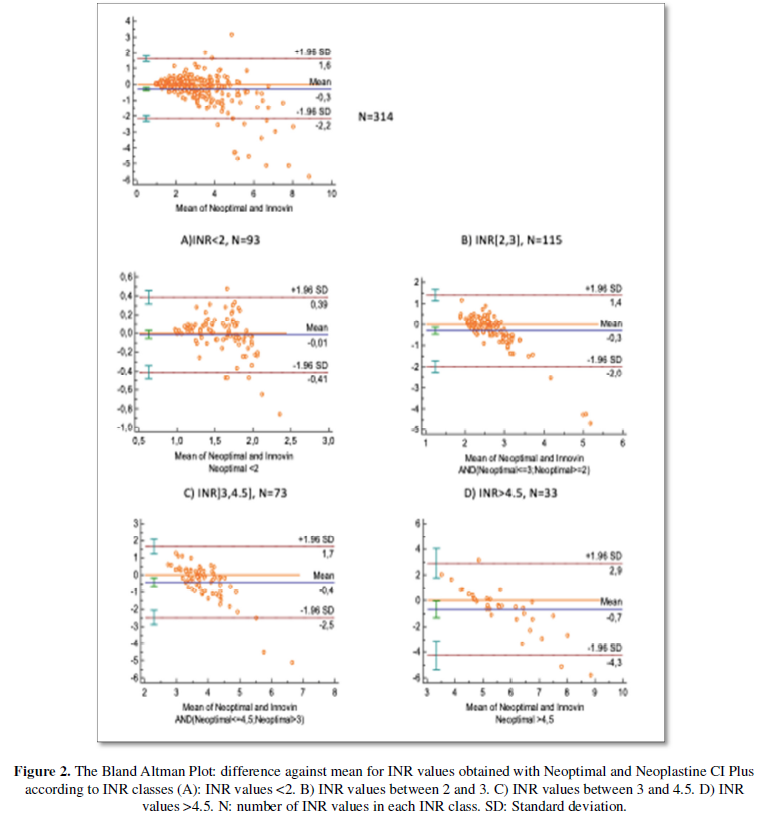 To know if changing thromboplastin/instrument combination affects the follow up of patients on anti-vitamin K treatment, a study comparing the agreement between three reagent/instrument combinations largely used in laboratory routine was assessed. The three selected thromboplastins had ISI value close to 1. The collected samples were chosen to give a wide range of INR values.

Overall, there was a good agreement between INR results inferior to 2. The agreement was increasingly poorer with longer PT times. Besides, the discrepancy increased when both reagent and instrument vary.

Cohen’s Kappa coefficient was high enough to consider that the agreement between the two reagents is substantial. Besides, the mean difference was -0.1 which is inferior to the recommended analytical bias (
Neoptimal vs Innovin

According to Cohen’s Kappa coefficient, the agreement between these two reagents was also substantial. The difference in INR values between these two reagents was -0.3 (-2.3; 1.6). A difference up to 2.3 is not clinically acceptable. This result was more evident for INR values between 2 and 4.5. Moreover, the limits of agreement was high enough to prompt an adjustment in anticoagulant dosage. Even for agreement limits between -1SD and 1SD, the values were still unsatisfactory with a difference in INR value up to 1.25.

This supports the inconsistency of INR values between laboratories which has been reported in previous studies [2,3]. The INR does in fact depend on different factors such as the value of mean normal PT determined by the laboratory, the exact value of ISI determined by the manufacturer, the variability of ISI between combinations and a significant part of systematic errors in PT which is influenced by local conditions [1,9]. It also depends on the type of the thromboplastin (recombinant or derived from animal tissue) as recombinant thromboplastin is known to be more sensitive and consequently associated to large variability in INR results [10]. The basis of the ISI principle has itself been criticized [7]. All these factors could explain the variability between different thromboplastins as shown in our study. The use of calibration with lyophilized calibrant plasmas has been proposed to reduce this variability inter laboratory [11]. This has also been shown in our previous study [4] when comparing Thromborel S reagent on SYSMEX 2100i and Innovin on SYSMEX 2100i using calculated INR and direct INR. The agreement was better when using the direct INR. Another alternative would be the use of Owren method for PT determination as it was reported that this method provided a bias less important and much less variable than the Quick method [7].

The authors declare that they have no conflicts of interest

This research did not receive any specific grant from funding agencies in the public, commercial, or not-for-profit sectors.
Download PDF View PDF