This study sought to identify socio-demographic factors associated with the onset of chronic diseases in an urban community in Rivers State, Nigeria. Longitudinal data were obtained from the records of a public hospital in Port Harcourt, Nigeria from 2013-2017. The data collected include the patients’ diagnosed primary morbidity as well as co-morbidities, age, sex, marital status, and occupation. The collected data was analyzed using appropriate statistical techniques. The most prevalent chronic diseases in the study population are hypertension (42.7%), peptic ulcer disease (20.3%), diabetes mellitus (11.9%), insomnia (7.7%), arthritis (7.0%), osteoarthritis (4.2%), fibromyalgia (2.1%), pityriasis (1.4%), appendicitis (0.7%), asthma (0.7%), renovascular disease (0.7%) and ulcer (0.7%).This study also reported an association between socio-demographic characteristics such as sex, age, marital status and level of education on the onset and morbidity pattern of these chronic diseases among patients in the study population. This study concludes that the prevalent chronic diseases amongst the patients are associated with socio-demographic characteristics. Therefore, this study recommends an urgent public health action through public enlightenment on healthy lifestyle patterns in order to lessen the burden of chronic diseases in the study population.

Chronic conditions are long-term health conditions which encompass a broad range of chronic and complex health conditions across the spectrum of illness, including mental illness, trauma, disability and genetic disorders [1]. They are also known as non-communicable diseases and have been described as diseases of long duration that follows a slow progression path [2]. Chronic diseases have been recognized as major killers in modern times owing to their high prevalence and mortality rate. This may not be unconnected with the increasing rate of physical inactivity in recent times [3]. Chronic diseases pose significant and rising challenges for nations of the world today. The burden of disease is shifting away from infectious diseases and injury to chronic conditions which thus requires various management techniques in order to mitigate the attendant challenges rising from them [1,4].

The changing pattern of diseases in urban Africa has been attributed to important factors such as poverty, underdevelopment, poor food and nutrition, insecurity, lack of sanitation and safe water, lack of education, lack of access to basic health care, pressures from tropic environment and ecological burden, climate change, human behavior changes, and economic instability [5,2].

Employers of labour have to pay high costs for chronic diseases in staff welfare costs, health insurance costs and reduced productivity often resulting from absenteeism. Chronic diseases lead to multiple death, reduced quality of life and high cost of living among people who have them. These tend to drive up costs and also lead to increased demand for health care.

The burden of chronic diseases can be lessened by integrated approaches targeted at lessening risk factors and conditions. Additionally, important strategies involving epidemiology and surveillance, environmental approaches, health system interventions and community resources that can improve the management of chronic conditions have also been advocated [6].

The onset of chronic diseases is often from lifestyle choices that are common with contemporary society and this explains their high prevalence in the world today. Four main categories of chronic diseases including cardiovascular diseases (CVDs), chronic respiratory diseases, diabetes and cancers have been recognized [7]. The World Health Organization reported that 40 million out of the 56 million global deaths in 2015 were due to non-communicable diseases [8]. Also, about 80% of these deaths occur in low-and middle-income countries while 48% of these deaths occur before the age of 70 [5,8]. Further reports from NASAC (2015) show that two-thirds of people living with hypertension are in low-middle income countries and the condition is estimated to affect one-quarter of the African adult population. The World Economic Forum reported a possible rise in death from chronic/non-communicable diseases over the next decade and the increase is expected to lead to more than 10 million deaths [9].

The burden of chronic diseases has been on an increase, even on a global scale. This is basically due to the incidence and prevalence of chronic conditions and risk factors as well as demographics such as age and health status [6]. The burden of chronic diseases is no less prevalent in Nigeria like other African countries. An approximate of 12% of the Nigerian population has mortality arising from chronic diseases. Nigeria is the most populous country in Africa with population exceeding 200 million with to 50% of which live in the rural areas [10]. Access to health and access to health and quality of healthcare services differ between rural and urban communities. This difference has been demonstrated in several studies [11]. In Nigeria, while there is a general prevalence of insufficient healthcare facilities in many health institutions, the situation is more challenging in the rural areas when compared to the urban areas given that the rural communities not only face more dire need for standardized healthcare facilities, the residents are also often not able to pay for these services.

A descriptive research design was adopted in accomplishing the objectives of this study. The quantitative data was obtained from all the hospital records of patients with chronic diseases from 2013 to 2017 in the University of Port-Harcourt Teaching Hospital, East-West Road, Port-Harcourt, Rivers State, Nigeria. Data collected included the patients’ age, sex, marital status, occupation, religion and diagnosed ailment. Appropriate statistical tools were adopted in presenting the data for the study and also for testing the study hypotheses.

Two hospitals were visited and management was presented with the ethical clearance, with the aims and objectives of the project and Cases (hospital records) from 2013 to 2017 was carefully selected from the hospital individually. In the final stage, a proportionate sample of records of chronic diseases were purposely chosen from each of the selected hospitals to adequately represent cases of chronic diseases within the selected area of study. Due to how cumbersome the records were, one in every 10 (ten) cases was picked.

Ethical approval was obtained from the Rivers State Ministry of Health and from the Ethics Committee of the respective hospitals with proper explanation of the purpose of the research. 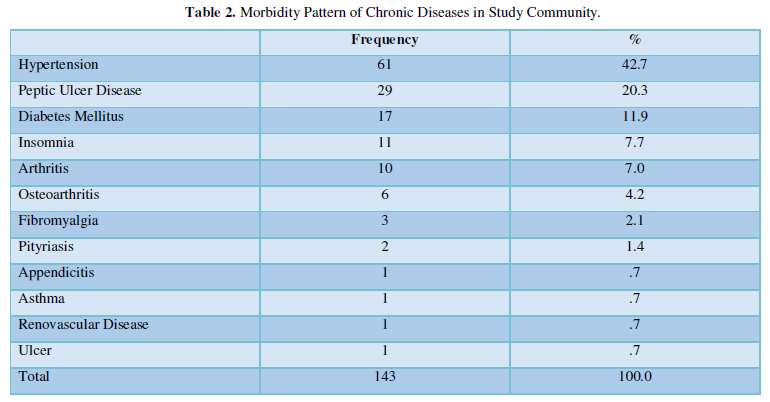 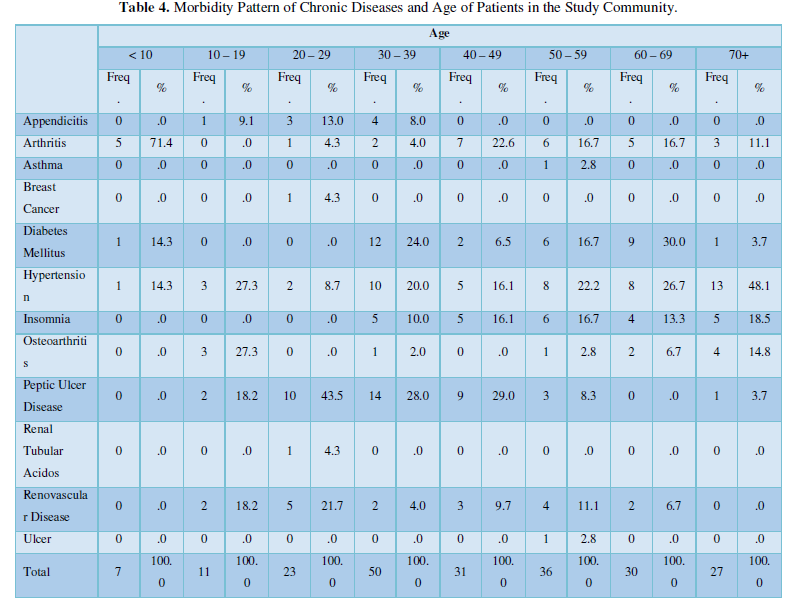 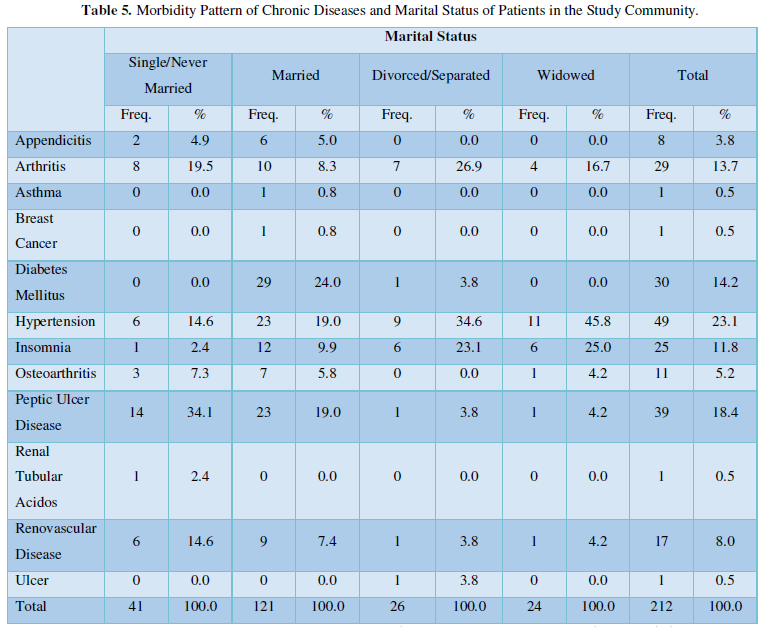 There is an increasing prevalence of chronic diseases which has been linked to increasing population of elderly persons on a global scale [2]. The increasing burden of chronic diseases will constitute a major global public health concern since non-communicable diseases are responsible for over two-thirds of global deaths [6]. Additionally, the increasing prevalence has been linked to the health, economic growth and development of nations while causing a terrible strain on social welfare and health systems of most nations of the world [2].

An assessment of participants’ sociodemographic characteristics and the morbidity pattern of chronic diseases was made. The first sociodemographic factor assessed was the sex of the patients. The study findings showed that male patients had higher prevalence of hypertension, arthritis, diabetes mellitus, peptic ulcer disease, osteoarthritis, renovascular disease and insomnia. Among the female patients, the most prevent were hypertension, peptic ulcer disease, diabetes mellitus, insomnia, arthritis, renovascular disease, appendicitis, asthma, breast cancer, renal tubular acidosis and ulcer. Overall, hypertension was highly prominent among both males and females in the community. A previous study had reported that the female gender was a major predictor of developing chronic diseases [2].

The third sociodemographic factor observed was the respondents’ marital status against the morbidity pattern of chronic diseases. The findings showed that peptic ulcer, arthritis, hypertension, and renovascular disease were the prominent ailments of single/never married patients whereas among the married patients, they were mainly diagnosed of diabetes mellitus, hypertension and peptic ulcer disease among some others. Divorced/separated patients were primarily diagnosed with hypertension, arthritis and insomnia among few minor other ailments while widowed patients, primarily had hypertension, peptic ulcer disease and arthritis. The relationship between marital status and health outcomes varies on a gender specific basis. Being unmarried was a significant risk factor for hypertension and mortality in men while being widowed was linked to a reduced risk of type 2 diabetes mellitus in women [13]. However, another study reported no association of marital status with morbidity from chronic diseases [12]. Taken together, the findings of this study are comparable to other previous studies in Vietnamese populations that have reported sex, education and age as important predictors of chronic diseases [14,12,15].

This study reports that hypertension, appendicitis, arthritis, breast cancer, diabetes mellitus, insomnia, osteoarthritis, peptic ulcer disease, renal tubular acidosis and renovascular disease are the predominant chronic diseases in the study population. The onset and morbidity of these diseases was associated with socio-demographic characteristics such as sex, age, marital status and level of education. Therefore, this study recommends an urgent public health action through public enlightenment on healthy lifestyle patterns in order to lessen the burden of chronic diseases in the study population.