Review Article
Development and Validation of RP-HPLC Method for Estimation Safinamide in its Bulk and Tablet Dosage Form.
Background: A new, sensitive, suitable, clear, accurate, and robust reversed-phase high-performance liquid chromatography (RP-HPLC) method for the determination of safinamide in bulk drug and tablet formulation was developed and validated in this research. The separation was performed using an HPLC method with a UV detector and Openlab EZchrome workstation programme, as well as a Kromasil C18 (250 mm X 4.6 mm i.d.) 5μm. Methanol and buffer (70: 30%v/v) was pumped at a flow rate of 1.0 mL/min and detected at 226 nm.
Result: The developed RP-HPLC method yielded a suitable retention time for safinamide of 2.57 min, which was optimized using trial and error basis. The linearity of the established method was verified with a correlation coefficient (r2) of 0.99996 over the concentration range of 1.01-15.14 g/mL. The percentage RSD for the method's precision was found to be less than 2.0 percent. The percentage recoveries were discovered to be between 99.60 and 100.80 %. 0.17 ug/mL and 0.52 ug/mL were found to be the LOD and LOQ, respectively.
Conclusion: The developed and validated RP-HPLC system takes less time and can be used in the industry for routine quality control/analysis of bulk drug and marketed safinamide products.
Keywords: RP-HPLC, Safinamide, Parkinson’s disease, Development, Validation
INTRODUCTION

After Alzheimer’s disease, Parkinson’s disease (PD) is the second most common chronic progressive neurological condition among the elderly [1-4]. Newron developed Safinamide (Xadago) mesylate (SAF), an orally accessible derivative from the chemical class of amino amides with several modes of action, including inhibition of MAO-B and Dopamine reuptake, for the treatment of epilepsy and Parkinson’s disease [5-7]. In Europe, it was approved in February 2015, and in the United States, it was approved on March 21, 2017. Safinamide mesylate (SAF) (S1), also known as (S)-2-(4-((3-Fluorobenzyl) oxy) benzyl) amino) propanamide methane sulfonate, is a medication that was recently created to treat Parkinson’s disease (PD) [8].

The developed method for simultaneous estimation of safinamide was validated for the following parameters using ICH Q2(R1) guidelines [9-21].

Specificity
To demonstrate the method's precision, the following solutions will be prepared and injected. (double-checked the peak purity).
Linearity and range
The statistical treatment of test results obtained by examination of samples with analyte concentrations around the claimed spectrum determines the analytical method's linearity. As a function of analyte concentration, the region is graphically plotted. Curve fitting percentages are measured.

Accuracy (% recovery)
The accuracy will be tested in the range of 50% to 150 percent of the working concentration. Every occurs solution will be prepared in triplicate. A placebo will be included in the experiment. For each study, the percent recovery was determined.

Precision
Robustness
Blank, the API test sample was prepared. These samples were injected under different chromatographic conditions as shown below.
Flow rate - 0.8 mL/min, 1.0 mL/min, 1.2 mL/min
Wavelength - 223 nm, 226 nm, 229 nm.
COT- 28°C, 30°C, 32°C.
Detection: The limit of detection (LOD) and limit of quantification (LOQ) were calculated separately using the following equations based on the standard deviation of the y-intercept and the slope of the calibration curve, respectively.

Optimized Chromatographic Conditions
The following chromatographic conditions were established by trial and error and were kept constant throughout the method (Table 1, Figures 3 & 4). 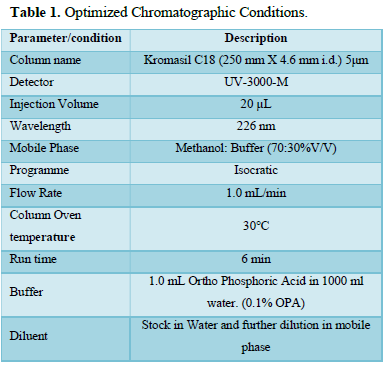 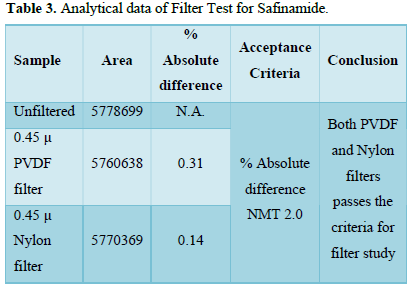 From the calibration curve we had to conclude that the safinamide shows linear response in the range of 1.0-15.14 μg/mL. The Regression value was found well within the limit. Result and statistical data of linearity of safinamide is given in table no. 13. Linearity graph of safinamide is shown in Figure 12 and Tables 7 & 8.

Conclusion: From the calibration curve we had to conclude that the safinamide shows linear response in the range of 1.01-15.14 μg/mL. The Regression value was found well within the limit.
Chromatogram of linearity for drugs (Figure 13)

Detection
It may be calculated based on the standard deviation (SD) of the response and slope of the curve(S). result of detection limit is given in Table 10. Calibration curve of safinamide for LOD and LOQ is given in Figure 12.
CONCLUSIONS
In the developed RP-HPLC method, the analyte was resolved by using an isocratic program, and the mobile phase was used Methanol: buffer (70:30 % v/v) at a flow rate of 1.0 mL/min, on an HPLC system containing UV- visible detector with Openlab EZ-Chrome Workstation and Kromasil C18 column (250 mm X 4.6 mm i.d. 5μm). The detection was carried out at 226 nm. The retention time for safinamide was found to be 2.57 min. The developed method has several advantages, including reproducibility of results, rapid analysis, simple sample preparation, and improved selectivity as well as sensitivity. The regression coefficient (r2) for each analyte is not less than 0.99996 which shows good linearity. The % recovery was in the acceptable range in the tablet dosage form. The % percent RSD was also less than 2.0 % showing a high degree of precision of the proposed method. Since the developed method is robust and reproducible and also less time consuming, it can be performed for routine analysis in the pharmaceutical industry for the bulk drug of safinamide and also in the pharmaceutical dosage form.
Download PDF View PDF