A 77-year-old man with a history of non-insulin dependent diabetes was admitted to the hospital in November 2018 due to right upper quadrant abdominal pain that was radiating to the back. Prior to admission, the patient experienced nausea for a period of three to four weeks.  Upon admission, he was found to be afebrile with a stable blood pressure of 104/57 millimeter of mercury (mmHg). Computerized tomography (CT) scan showed gallbladder wall thickening, multiple gallstones within the neck, and adjacent stranding compatible with acute cholecystitis (Figure 1).

Magnetic resonance imaging (MRI) with magnetic resonance cholangiopancreatography (MRCP) with and without intravenous contrast was completed resulting in evidence of cholelithiasis with gallbladder wall oedema and trace fluid concerning for acute cholecystitis. However, the biliary system did not show any significant findings (Figure 2).

He was admitted under general surgery service and diagnosed with acute cholecystitis with cholelithiasis. The patient underwent laparoscopic cholecystectomy. No complication was reported during the surgery. Gallbladder tissue pathology reported acute on chronic cholecystitis. 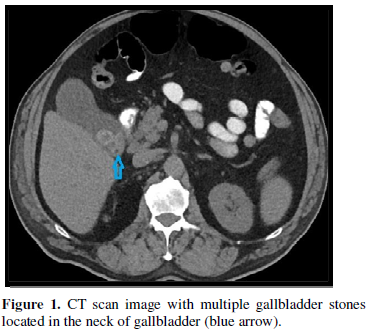 Three days after surgery, the bilirubin had increased, thus he underwent endoscopic retrograde cholangiopancreatography (ERCP), and a sphincterotomy was performed. Per the procedure note a filling defect in the lower third of the main bile duct compatible with sludge was noticed and it was swept. There was no bile leak seen. The patient improved and was discharged home 3 days after ERCP with improvement in his medical condition.
In May 2019, the patient’s primary care physician obtained a CT scan of the abdomen and pelvis without contrast due to intermittent dull and mild right upper quadrant abdominal pain. Per the CT scan report there was an unidentified liver lesion measuring 1.3 x 1.5 cm. Thus, the patient was referred to an oncologist in July 2019 due to a concern of hepatocellular carcinoma. The patient’s oncologist initiated work up which resulted in an alpha fetoprotein (AFP) of 4.7 nanogram per milliliter (ng/ml), that was within normal limits, and a negative acute viral hepatitis panel. MRI with and without contrast of the liver showed an area of abnormal signal and enhancement within the inferior medial aspect of the right lobe of the liver with ring enhancement measuring 1.5 x 1.0 centimeters (cm) (Figure 3).

A CT guided needle biopsy from the liver lesion was performed and the specimen was sent to pathology. Per the pathology report: “There were multiple cores showing abscess contents with fibrosis abscess wall which is surrounded by fibro-adiposis scar tissue with lymphoplasmacytic and histiocytic infiltrate. No organisms are identified and no malignant cells.” Unfortunately, the specimen was not sent to the microbiology laboratory. This lesion did not resolve with 4 weeks of empirical oral antibiotic therapy consisting of levofloxacin and metronidazole. 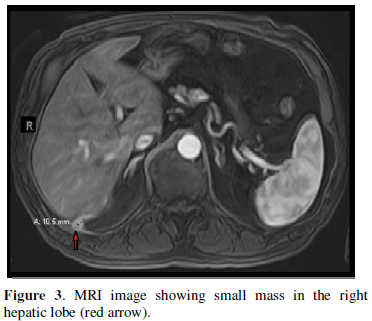 Repeated CT scan of the abdomen and pelvis with and without contrast in November 2019 showed small persistence of soft tissue density focus posterior to the right hepatic lobe with slight increase in the size to 2.2 cm (Figure 4). 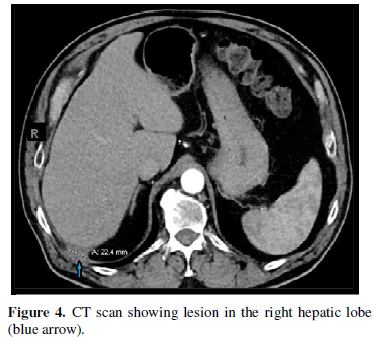 Another CT-guided needle biopsy from the lesion was done again in November 2019 and the specimen was sent to microbiology laboratory for bacterial, fungal, and acid-fast bacteria (AFB) culture, all of which came back with no growth. However, the pathology report at this time showed organizing fibrosis with abscess containing organism suggestive of actinomyces. The AFB and Grocott methanmine silver (GMS) stains were both negative and no malignant cells or liver parenchyma were present (Figure 5).

In light of the new pathology findings and lack of improvement with the previous selected oral antibiotic, we targeted our therapy to treat the actinomyces perihepatic infection, despite a negative bacterial culture tissue specimen. The patient was treated with amoxicillin/clavulanic acid for a total of 6 months until July 2020. No adverse effects from the antibiotic were reported. Follow up CT scan abdomen and pelvis with contrast in July 2020 showed resolution of the previous hepatic lesion (Figure 6).

Actinomycosis is caused by the actinomyces species of gram positive, non-spore forming and is facultative anaerobic bacteria. It is chronic granulomatous disease [11]. It catechizes with sulphur granules and branching filamentous cells. Usually, the granules’ color is yellow.

In times past, these features were commonly considered diagnostic; however, they are also commonly mimicked by other bacteria, such as staphylococcal, aspergillus, and nocardia species [1]. Out of the actinomyces family A. israelii remains the most common form to cause infection, but occasionally A. naeslundii, A. odontolites, A. viscous, or A. meyeri will be isolated [13].

The true incidence is nearly impossible to calculate because of the difficulty in diagnosing or even failure to consider actinomycosis as part of the differential. A paper by Cintron JR in 1996, estimated that there is one case per 40-119,000 population [14]. Even though any age group can be affected, the average age of affected persons is 30 to 50 years old with men three times more likely to be affected than women [7]. A retrospective survey published in 1999 of nocardia and actinomyces infections in five hospitals done by Dr, Dominguez showed no reported cases describing patients being at higher risk of infection due to underlying diseases or immunocompromised states [3,16].
Clinical presentation can range from abdominal pain, cramps, nausea, vomiting, weight loss, diarrhea, back pain, oedema, cough with sputum production, or chest pain. These symptoms can lead to a wide differential and many studies are ordered [3,7,10]. Laboratory studies are usually nonspecific with lab markers such as leukocytosis and elevated C reactive protein and erythrocyte sedimentation rate.

Imaging with CT scan is common with conformational imaging including MRI or ultrasound as needed. Imaging commonly reveals a mass which is suggestive for an abscess [8]. Biopsy and gram staining of the abscess is diagnostic.

Actinomyces species are anaerobic and significantly slow growing in nature so it may take up to 14 days of incubation time for the bacteria to grow [4]. Often actinomycosis is not suspected so cultures are not grown for a sufficient amount of time. Even when cultures have been incubated properly it has been noted that cultures can have a false negative rate of 50% [7]. Acquaro [10] noted that cultures can be negative in 76% of cases. Due to this high rate of negative cultures, actinomycosis is first suggested by the pathologist when they find sulphur granules and branching filamentous cells [6].

Diagnosis of actinomycosis is virtually never considered due to the nonspecific findings on both laboratory and imaging studies. In addition, many cases cannot be identified by history alone causing treatment to be complex [6,10]. After the diagnosis is determined, the disease process is often connected to the initial inciting event, such as was the case with our patient. This is due to the broad range of time of symptom onset to actual presentation with cases being reported as early as 1 year to 11 years after the initial date of insult [4,8,9].

To our knowledge, our patient represents the first reported case of actinomycosis within a liver abscess without noted incidence of bile spillage or loss of gallstones during a laparoscopic cholecystectomy. A likely explanation is either a small amount of bile was split or a gallstone was lost during the procedure but they went unnoticed. However, spilled gallstone during laparoscopic cholecystectomy is infrequent with standard practice being to not retrieve these stones or give antibiotic. Adverse effects from spillage of stones into the abdominal cavity, are rare and usually manifest within months [18,19].

Actinomyces species has remained susceptible to multiple antimicrobials with penicillin being the first choice of treatment [1,5]. Treatment is typically high dose intravenous penicillin for 2-6 weeks followed by 6-12 months of oral penicillin [6]. As noted by Sudhakar et. al, many different treatment regimens have been therapeutic, including treatment with penicillin for 1 week [2]. If the patient has a penicillin allergy, favorable results have been reported with the use of tetracyclines or clindamycin. In majority of cases surgery can be avoided unless medical therapy fails or critical organs are involved. Surgery options vary from a percutaneous drain to removal of the abscess or mass. Resolution of the abscess is monitored by repeat imaging, usually CT scan [4]. In this particular case, the patient experienced a positive outcome after correct diagnosis and treatment with oral Augmentin for 6 months with a total resolution of the perihepatic abscess as it was seen in the follow up CT scan.  As with many other infections, the antibiotic therapy for actinomycosis cannot be made uniform across all patients but instead must be personalized based on the length and severity of the disease.
Download PDF View PDF