Research Article
Cardiovascular Risk Factors and Adiponectin in Children and Adolescents with a Classic Congenital Adrenal Hyperplasia
Background: Congenital adrenal hyperplasia (CAH) is associated with hypocortisolism and hyperandrogenism, and when combined with glucocorticoid use, may cause predisposition to metabolic disorders.
Aim: To assess the cardiovascular risk factors in 25 children (19 girls) with CAH, and establish a correlation between glucocorticoid use and serum adiponectin levels.

Results: Eleven (44%) patientswere overweight. In 12 (48%) patients, the waist circumference (WC) was ≥75th percentile for age and sex, and correlated with serum adiponectin levels and the body mass index z-score. Eight (32%) patients presented increased BP. SBP correlated with WC). One (4%) patient showed hyperinsulinemia and 18 (72%) showed an altered lipid profile, owing to a correlation between high-density lipoprotein (HDL) and androstenedione. Adiponectin levels were lower in the group treated with dexamethasone than those with prednisone/prednisolone and hydrocortisone (7.67 vs 12.34 vs 19.71 µg/mL, respectively).

Conclusion: High prevalence of obesity, increased BP, increased WC, and dyslipidemia were observed. WC positively correlated with SBP and negatively with adiponectin, whereas HDL was negatively associated with androstenedione.
INTRODUCTION

Congenital adrenal hyperplasia (CAH) is a group of autosomal recessive disorders that cause a deficiency in the biosynthesis of adrenal cortisol [1,2]. About 90% to 95% of the cases are due to a mutation in the CYP21A2 gene, which encodes the 21-hydroxylase enzyme [2,3]. The clinical manifestations correlate to the degree of reduction of the enzymatic activity that allows the disease to vary from a classic form (salt-wasting and simple virilizing), the incidence which ranges from 1:10,000 to 1:15,000 live births, to a non-classic form with an incidence of 1:1,000 live births [4]. The result of this deregulation is a decreased production of cortisol and aldosterone, as well as an increase of precursors and pituitary secretion of adrenocorticotropic hormone, due to a negative feedback loop, which causes adrenal hyperplasia and enhanced androgen production [4,5]. In the classic form, prenatal hyperandrogenism leads to virilization of the external genitalia, causing genital ambiguity at birth in female infants [4]. Postnatal exposure to androgens results in the virilization, accelerated growth, advanced bone maturation, and early puberty [5-7]. The treatment consists of replacing, when necessary, glucocorticoids and mineralocorticoids. The corticosteroid of choice is hydrocortisone, administered at a dose of 10-15 mg/m-2/day-1. When hydrocortisone is not available, long-acting glucocorticoids such as prednisolone, prednisone, or dexamethasone could be used [4].

Despite the improvement in the treatment of this pathology through more effective corticosteroid-based therapies, the main limitation is to replicate the cortisol circadian rhythm, resulting in a difficult balance between hypercortisolism and hyperandrogenism [4-8].

Both hypercortisolism and hyperandrogenism have a deleterious effect on the metabolic control of the patients, predisposing them to develop risk factors for cardiovascular disease such as obesity, hyperinsulinemia with insulin resistance, dyslipidemia, and hypertension [9-15]. Moreover, the role of adipokines and their interference with the treatment of CAH patients are still to be elucidated [16].

Few studies in the literature evaluate the metabolic changes in children with CAH, and the most recent works show that factors such as obesity, dyslipidemia, hypertension, and insulin resistance are already present in childhood [9-15].
The aim of this study was to assess the presence of cardiovascular risk factors in children and adolescents with CAH, and establish a correlation with the glucocorticoids type used for treatment, disease control, and serum levels of adiponectin.

In this cross-sectional study, 25 children and adolescents with a clear clinical and laboratory diagnosis of CAH (classic form), were under periodic and medical follow-up, and were not presenting other illnesses and/or acute or chronic associated metabolic changes were included.

Recruitment for inclusion in the study was carried out during the periodic check-up of the patients conducted at the Outpatient Clinic of Pediatric Endocrinology of the Instituto de Puericultura e Pediatria Martagão Gesteira, Federal University of Rio de Janeiro.

The study was approved by the ethics committee of the hospital, and all participants signed the free and informed consent form.

Data on age, sex, and type and dosages of glucocorticoids used in treatment were collected from medical records.
During physical examination, weight (child wearing only underwear), height (Tonelli stadiometer), stage of puberty, blood pressure, and waist circumference (WC) were measured.

The doses of glucocorticoids used for the treatment were converted into an equivalent dose of hydrocortisone, according to the following proportions: 1 mg of hydrocortisone was equal to 0.25 mg of prednisolone/prednisone and 0.037 mg of dexamethasone [21].

Blood samples were collected from fasting patients at 8 a.m.  The serum levels of fasting glucose, total cholesterol (TC), high-density lipoprotein (HDL), low-density lipoprotein (LDL), and triglycerides were measured using Virto’s 5.1/FS, which calculates the concentrations through a dry chemistry method. Insulin and serum levels of androstenedione were assessed by chemiluminescence, whereas plasma renin activity was measured by radioimmunoassay. The levels of adiponectin were assessed by radioimmunoassay, in sera properly stored for this purpose, by using GAMA-C12 and kits based on a double-antibody polyethylene glycol technique, for which intra- and inter-assay coefficients of variation were between 1.7% and 6.2%, and between 6.9 and 9.2, respectively.
The index of homeostasis model assessment-insulin resistance (HOMA-IR) was calculated by multiplying the fasting glucose (mmol/L) by fasting insulin (µIU/mL) and dividing the result by 22.5 [22].

Categorical variables were expressed as percentages or proportions.  Pearson chi-square and Fisher's exact tests were used to compare the proportions.

Continuous variables were expressed as averages, medians, standard deviations, and interquartile distances. Student's t-test, analysis of variance (ANOVA), and Kruskal-Wallis test were used to compare the averages and medians, respectively.

Simple linear regression analysis was performed to assess the correlation between metabolic variables.
In all the statistical tests, a significance level of up to 5% (p ≤ 0.05) was adopted as a cutoff. The Epi Info 7.0 software was used for calculations.

The age of the 25 study patients (19 girls and 6 boys) varied between 2 and 18.75 years, with an average age of 11.5 years and an interquartile distance (IQD) of between 8.0 and 13.4 years. A total of 13 patients were pubertal, 10 were prepubertal, and the remaining 2 were using a gonadotropin-releasing hormone (GnRH) analog to inhibit pubertal development. Concerning the clinical manifestations, 8 patients presented simple virilizing CAH and 17 were salt wasting. Concerning the treatment, 3 patients were receiving hydrocortisone, 14 prednisolone, 4 prednisone, and 3 dexamethasone, with an average equivalent dose of 12.2 mg/m-2/day-1 hydrocortisone (IQD: 8.0-15.8). Only 1 patient was not receiving glucocorticoids, owing to having terminated the treatment and returning to be re-monitored when the study started. A total of 17 salt-wasting patients were treated with fludrocortisone. Considering the laboratory control, 10 (40%) patients presented serum levels of androstenedione within the normal range, 14 (56%) patients displayed above-normal levels, and 1 patient (4%) had a level that was undetectable. The detailed clinical and laboratory data are shown in Table 1. 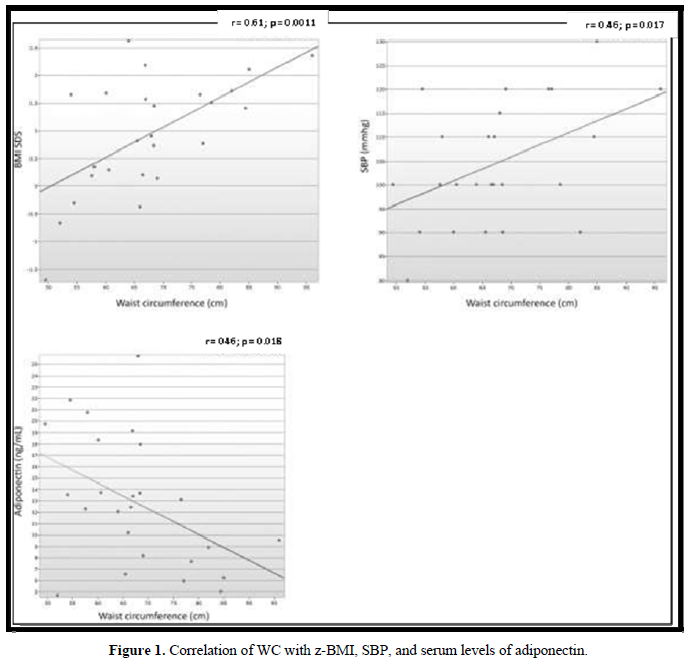 Only 1 (4%) child presented hyperinsulinemia, whereas 2 (8%) presented borderline serum levels of insulin. The levels of fasting glucose were normal in all patients. There were no differences in the average levels of glycemia and median insulin in relation to sex, clinical manifestations of CAH, or type of glucocorticoids used for the treatment. A significant positive correlation was detected between the levels of blood glucose and fasting insulin (r = 0.41; p = 0.041) (Figure 3). The levels of blood glucose and serum insulin did not correlate with the levels of androstenedione and adiponectin, age, or equivalent dose of hydrocortisone.

The serum levels of adiponectin were higher in the group treated with hydrocortisone, followed by patients receiving prednisone/prednisolone, and was lower in the group treated with dexamethasone (19.71 µg/dL vs 12.34 µg/dL vs and 7.67 µg/dL, respectively; p = 0.047). No difference in the median levels of adiponectin was observed between the sexes and the clinical manifestations of CAH. 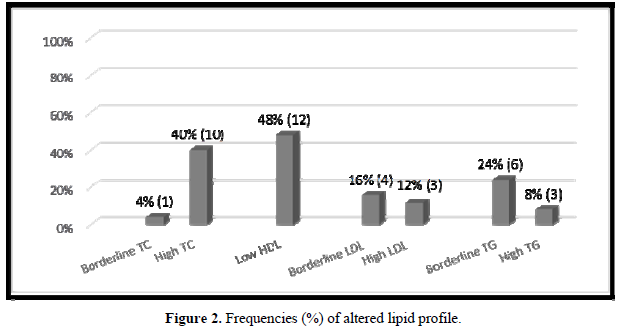 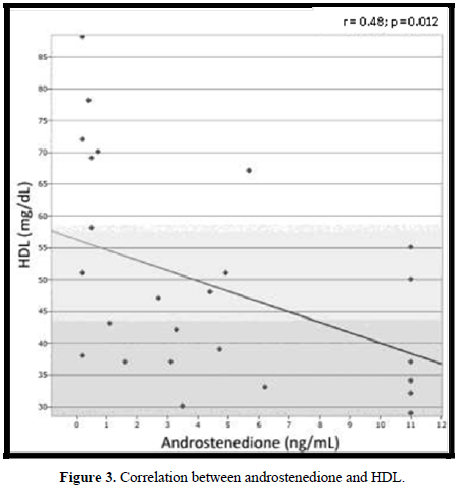 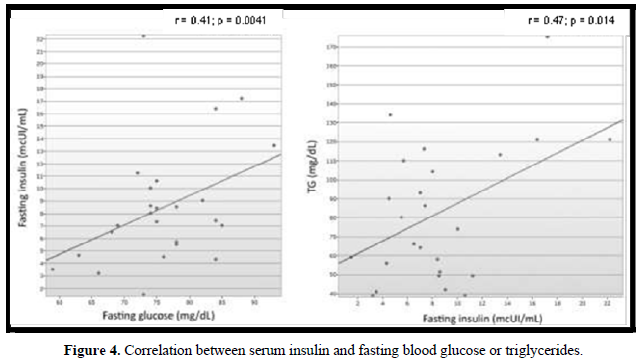 The concern to trace metabolic disorders in patients with CAH has been gaining attention in recent   years [6-10,13]. During the past 60 years, the increased availability of glucocorticoids for use in the treatment of CAH has increased the long-term survival of patients. Therefore, more attention has been given to the possible health problems developed in adulthood that are related to the disease, and the possible appearance of signs and symptoms of these comorbidities already in childhood. This study showed a high prevalence of obesity, dyslipidemia, and hypertension in children and adolescents with CAH.

The prevalence of obesity in our study was 16%, which is consistent with the findings in the literature that varies between 16% and 35% [11,12,23]. Despite an increase in childhood obesity in Brazil, the prevalence of obesity in patients with CAH is even higher than that observed in Brazilian children between 5 and 19 years old, according to the “Family Budget Survey 2008-2009” carried out by the Brazilian Institute of Geography and Statistics [24]. Although several studies have correlated z-BMI with the equivalent dose of hydrocortisone [11,23] and the use of corticosteroids with longer half-life [23], in our study, no correlation was observed between z-BMI and the dose or type of glucocorticoids used for the treatment, presumably because 87% of our patients were using glucocorticoids with a half-life longer than that of hydrocortisone.

In our study, the frequency of dyslipidemia was higher than that observed by most authors [12,23,25,20]. Of our patients, 72% presented several changes in their lipid profile, and a mild negative correlation was observed between the levels of HDL and androstenedione (r = -0.48; p = 0.012). This may suggest that an inappropriate disease control could represent a risk factor for dyslipidemia. Although the dyslipidemia in CAH patients could be justified by the hyperinsulinemia caused by both hypercortisolism and hyperandrogenism [15,20], in our group, only 1 (4%) patient presented an increased level of insulin. No correlation was observed between the serum levels of insulin and those of HDL, LDL, and TC. A mild positive correlation was observed between the levels of insulin and those of triglycerides (r = 0.47; p = 0.014).

In our study, the prevalence of patients with increased BP was 32%.  BP was ≥90th percentile in 24% of the patients and ≥95th percentile in 8%. This prevalence was higher when compared with that of Brazilian children, which varies from 0.8% to 8.2% [26,27]. When divided into systolic and diastolic pressures, 16% presented SBP above normality, according to age and sex (8% had increased SBP and 8% were borderline), whereas a borderline SBP was detected in 16% of the patients. A limitation to our study is that BP was measured during a medical appointment and not by monitoring the patients, which could increase the possibility of “white coat hypertension”. However, the frequency of hypertension and prehypertension was lower in our group than in the patients described by Subbarayan and collaborators [12], whose frequencies of increased SBP and DBP were of 20.9% and 11%, respectively, obtained by monitoring the BP for 6 h. The levels of SBP or DBP did not correlate with the equivalent dose of hydrocortisone and plasma renin activity.  Although obesity is a known risk factor for systemic hypertension [27-28], in our group, a higher frequency of altered BP was not detected in overweight patients and no correlation was observed between SBP and DBP and z-BMI. Our results are similar to those published by Subbarayan and collaborators [12] and by Finkielstain and collaborators [23].

Our study was the first to evaluate the WC in a pediatric population with CAH. WC is considered an independent predictor of cardiovascular risk in adults and children. It is an important indicator of insulin resistance, dyslipidemia, and hypertension [19,28,29]. In our study, 48% of the patients presented increased WC, which positively correlated with SBP. Moreover, a significant negative correlation was observed with the serum levels of adiponectin, considered a protective factor for cardiovascular disease [30-32]. Studies with higher numbers of patients would be required to assess whether an increased WC is an independent risk factor for cardiovascular disease in children with CAH.

In this study, the high prevalence of obesity, overweight, hypertension, and dyslipidemia that were observed would justify the early assessment of risk factors for cardiovascular disease in pediatric patients with CAH. WC positively correlated with systolic BP and negatively with adiponectin. The serum levels of HDL already negatively correlated with androstenedione.

The authors declare that there is no conflict of interests that could be perceived as prejudicing the impartiality of the study.

This research did not receive any specific grant from any funding.
Download PDF View PDF