Research Article
Whole Blood Transfusion in Cats - Successful Case Management in 3 Cats
Feline blood transfusions are relatively uncommon in India and severe anemia in cats is often an indication for blood transfusion. Generally fresh whole blood is typically administered at emergency moments and blood components for chronic cases worldwide. These abstract reports feline whole blood transfusion in three cats during 2018-19 at the TANUVAS ANIMAL BLOOD BANK, Madras Veterinary College, and Chennai, India.  In all the three cases, clinical exam revealed hypothermia, poor perfused and blanched mucous membranes, aortic thudding at abdomen level and related secondary complications of inappetence, orthopnea. One Domestic Short Hair tom cat aged 4 years, weighing 4.2 kgs was presented with history of road traffic trauma involving right fore-limb crush injury and severe blood loss, the other case of a DSH queen cat aged 9 years weighing 3 kgs was presented with signs of chronic renal insufficiency. The third recipient was a 5-year-old male DSH brought in for severe anemia concurrent to a hemoprotozoan infection. All the three cats were identified as type A and the selected donors were grouped for type A using the Alvedia feline typing kit using immunochromatographic technique. Whole blood transfusion was done after a major and minor cross match compatibility check. Post transfusion, the crush injury cat was successfully amputated and cat with Hemobartonella felis was treated and both reviewed in good health after a month. The third case with chronic renal insufficiency feline developed renal complications after 2 months and succumbed to death.  This case report discusses the uncommon whole blood transfusion in a feline and the importance of feline blood typing for safe transfusion in cats.

Keywords: Feline, Blood donor, Transfusion, Type A
INTRODUCTION
Feline blood transfusion is relatively un common in veterinary practice in India. Commonly, anemia in cats is the indication for blood transfusion where fresh whole blood is typically administered at emergency moments. Feline Blood typing enables the veterinarian to identify the blood group of the patient or a candidate donor. This assay is based on a hemolytic or agglutinating reaction in which the reagent or antibody reacts with the RBCs of the test subject. The crossmatching test does not identify the blood group but, instead, detects serological incompatibility between a candidate donor and the patient. Reasons for testing, using either of these methods, prior to transfusion include the need to avoid an acute hemolytic reaction during or following transfusion, an assurance of an optimal lifespan of the transfused RBCs, the prevention of incompatible blood transfusions in the future, and the prevention of neonatal isoerythrolysis.

TREATMENT
A healthy neutered tom cat aged four years weighing 4.2 kgs brought in for vaccination was selected as a blood donor with the consent of the owners. Two ml of EDTA blood was collected and the feline donor blood parameters were normal in the range of Hb 14.7g/dL, PCV 40.6 %, R.B.C 8.5 m cells/cmm, Platelets 3,82,000 cells /cmm, leucocyte count of 8,400 cells/cmm. Using the Alvedia quick feline blood typing kit (Alvedia, 11-13 Rue des Aulnes, 69760 Limonest, France, ph +33 478 380 239) that uses immunochromatographic column gel technique, both the donor and the recipient cats were typed as type A with the given test procedure. A major and minor cross match was done to ensure further compatibility an no agglutination was observed. The donor cat was anesthetized under diazepam and ketamine and prepared for donation. About 30 ml of whole blood was collected from the jugular vein of the donor cat using Citrate Phosphate Dextrose as the anticoagulant in a 50 ml syringe slowly with constant tilting of the syringe up and down to ensure proper mixing of the whole blood with the anticoagulant according to the standard procedure.
The whole blood was transfused through the femoral vein of the recipient cat slowly with standard precautions over a period of half an hour to avoid circulatory shock.

The recipient feline was kept under observation for transfusion reactions and follow up. On the first day, there was mild hypothermia (99°F), inappetence and lethargy. 48 h post transfusion the cat showed good improvement in terms of blood compatibility, pink mucous membranes, grooming, normal temperature, pulse and respiration, feeding, urination and bowel patterns Mid tibial amputation was carried out under general anesthesia successfully and the feline was discharged in 3 weeks with a normal recovery. The cat was reviewed after 2 months in good health (Figures 1-6). 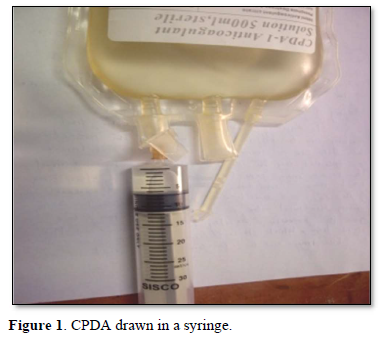 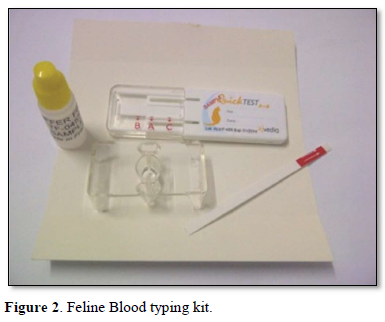 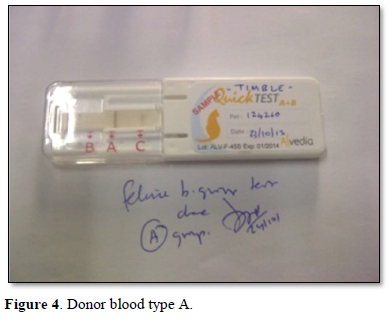 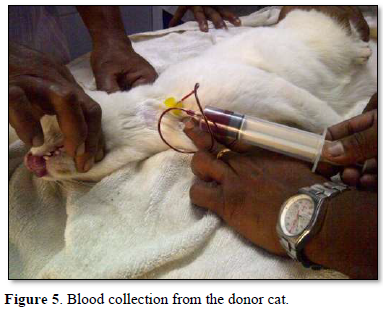 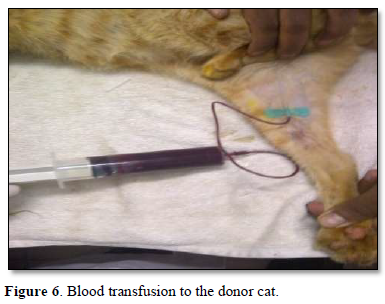 The AB Blood group system is recognized in cats consisting of type A, type B, type AB and the A allele being dominant over the B allele. Although type A is the most common blood type and AB is the rarest blood type in cats, the frequency of type A and type B in domestic short hair cats varies worldwide [1].

Helm and Knottenbelt [1] opined that type B cats normally have high tire of anti A antibodies and if they receive A blood, they will eventually show massive fatal hemolytic reactions. Type A cats have weak titer of anti B antibodies and if they receive B blood will show mild hemolytic reactions within 3 days, hence forth making the blood typing very mandatory in felines before a transfusion.

In cats, blood should always be collected from the jugular vein, as blood flow rates are too slow from peripheral veins. Donor cats should be sedated to ensure proper restraint before being positioned in lateral recumbency. Placing some padding under the cat’s neck often improves access to the jugular vein during collection. A sedative combination (e.g., ketamine and midazolam or diazepam) is referred. Any sedation that can cause hypotension (e.g., acepromazine or medetomidine) should always be avoided. The usual donation volume for cats is 11 ml/kg; for most cats, it may be useful to administer intravenous saline to maintain normovolaemia [3].

Blood from cats should therefore routinely be collected into a 50 ml syringe attached to a butterfly needle or catheter. Although heparin can be added to the syringe, ACD or CPD are preferred since the blood can then be stored for up to four weeks after collection provided it is kept refrigerated. The syringe should contain 1·3 ml ACD or CPD (withdrawn from a human blood collection bag) per 10 ml of blood to be collected.

Circulatory overload is a relatively common transfusion complication in small animals (especially in cats) and is usually associated with the rapid administration of whole blood to patients with cardiac disease, renal failure or normovolaemic anemia [4]. Circulatory overload resulting in pulmonary oedema is characterized clinically by tachycardia, tachypnoea, dyspnea and coughing. The use of appropriate flow rates and packed red blood cell transfusions rather than whole blood reduces this problem. If circulatory overload is encountered, the transfusion should be stopped immediately and furosemide and oxygen given as necessary to control the symptoms.

Bovens and Jones [5] reviewed about feline xenotransfusion with canine blood in 62 cats indicating that cats do not appear to have naturally-occurring antibodies against canine red blood cell antigens: compatibility tests prior to the first transfusion did not demonstrate any evidence of agglutination or hemolysis of canine red cells in feline serum or plasma.

DISCUSSION
Cats have an AB blood group system, and their RBCs may be A, B, or, rarely, AB, A and B are alleles in the same locus, where A is dominant over B. The mode of inheritance for AB has not yet been described. The frequency of feline blood types varies according to breed and geographic location, but most cats (> 95%) have type A RBCs. Less than 5% of the cat population possesses the type B RBCs, and 1% or less of domestic shorthair or longhair cats have type B blood. The frequency of type B blood is higher in certain breeds and may be as high as 77% in the British shorthair Most type B cats have powerful naturally occurring anti-A alloantibodies, such that transfusion of type A blood into a type B cat will result in an acute hemolytic reaction. The half-life of transfused RBCs following such transfusions is approximately 1 h. Approximately 30% of type A cats will possess weakly agglutinating anti-B antibodies, such that only a minor reaction occurs when a type A cat is transfused with type B blood, rendering the transfusion inefficient. The half-life of the transfused RBCs in these transfusions is approximately 2 days. Type AB cats do not possess anti-A or anti-B antibodies and can be safely transfused with type A blood. Although a type AB cat could technically receive RBCs from a type A or type B cat, anti-A alloantibodies in plasma from a type B cat could cause a reaction. Ideally, 2 types of feline donors are desired: a type A cat, at the very least, and an available type B cat, whenever in contrast to dogs, cats possess naturally occurring alloantibodies against the blood type antigen they lack [6].

In cats, transfusion reactions associated with AB, mismatched transfusions can vary from mild delayed reactions to severe life-threatening reactions with even small volumes of mismatched blood due to the presence of naturally occurring alloantibodies: Type B cats receiving type A blood. Massive intravascular hemolysis of type A (donor) cells occurs due to the presence of a high titer of naturally occurring anti-A antibodies. This early reaction can be fatal, which is why unmatched blood should never be used for feline blood transfusions; Type A cats receiving type B blood. Although type A cats often have weak anti-B alloantibodies, transfused type B (donor) cells can have a mean half-life of as little as two days. The hemolysis that occurs is extravascular and clinical signs are therefore much milder. The main clinical significance is that PCV will fall to pretransfusion levels within days of the transfusion [3].
A mismatched transfusion with type A blood given to a type B cat will result in a very serious acute hemolytic transfusion reaction. A first transfusion and as little as one milliliter of incompatible blood may cause a fatal reaction without prior sensitization. Affected cats may show anaphylactic signs of hypotension, bradycardia, vomiting, and convulsions followed by hemolytic signs of pigmenturia and icterus [7-9].

However, in the field conditions or during of unavailability of feline blood typing kits, a simple cross match of mixing two drops of plasma with one drop of whole blood on a clean slide from either recipient or donor, at room temperature will reveal macroscopic agglutination within a minute in case of AB incompatibility owing to the strong anti A agglutinins in cats [10-13].

This case report discusses an uncommon whole blood transfusion in a feline and the importance of feline blood typing for safe transfusion in cats.
Download PDF View PDF