Case Report
A Case Report: Stevens-Johnson Syndrome Induced by the Combination of Lamotrigine and Valproic Acid
Lamotrigine is pluripotent antiepileptic drug. However, it is associated with many serious adverse effects such as Stevens-Johnson syndrome, especially when co-administrated with valproic acid. We report a case of Stevens-Johnson syndrome in an adolescent in a context of polymedication of antiepileptic drugs. Lamotrigine was added to his existing treatment of valproic acid and levetiracetam. Eleven days after Stevens-Johnson syndrome was developed and a notification was sent to the pharmacovigilance service of the EHU of Oran to calculate the imputability. The patient received symptomatic treatment with methyl prednisolone and a rehydration regimen was instituted. His condition improved over the next two weeks and he finally recovered with continuous outpatient follow-up.

Lamotrigine (LTG) is a second-generation anti-epileptic drug, active on both focal and generalized seizures [1,2]. It is also effective in the treatment of various neuropsychiatric disorders [3]. The use of LTG is associated with the risk of serious skin adverse effects. These effects include life-threatening rashes, such as Stevens-Johnson syndrome (SJS) [4]. Children undergoing polytherapy have a higher risk of developing them [5]. As well as the combination of LTG and valproic acid (VPA) which increases the frequency and the severity of these skin reactions [6]. VPA not only decreases theclearance of LTG but also inhibits the detoxification pathways [6].
CASE REPORT

A 17-year-old adolescent with mental retardation secondary to hypoxic ischemic syndrome and generalized epilepsy, was referred to the emergency room for a febrile rash and skin detachment. Physical examination showed phlyctens, congestive facial oedema and pruritic erythematous macules affecting his face, extremities, body, and hips. The epidermal detachment interested 10% of the skin surface with a positive Nikolsky’s sign. Mucosal damage (cheilitis, mouth ulcersand bilateral conjunctivitis) were associated (Figures 1 and 2).
From the dermatologic point of view and considering the history and clinical presentation, the patient was diagnosed with SJS and a notification was sent to the pharmacovigilance service of Oran EHU to calculate the accountability.
The drugs investigation found a first intake of LTG (25mg once a day) eleven days earlier and there were no other medications introduced to his treatments in the previous three months. The rest of his treatment included levetiracetam(LEV) (750 mg twice a day) and VPA (500 mg three times a day), perfectly tolerated for more than two years. Since the suspected cause was LTG, the drug was stopped immediately. The patient received symptomatic treatment with methyl prednisolone and a rehydration regimen was initiated. Ocular lesions were treated with rifamycin (eye drops and ointment) and oral care (mouthwash) was also indicated. His condition improved over the next two weeks and the patient eventually recovered and was discharged with continuousoutpatientfollow-up. 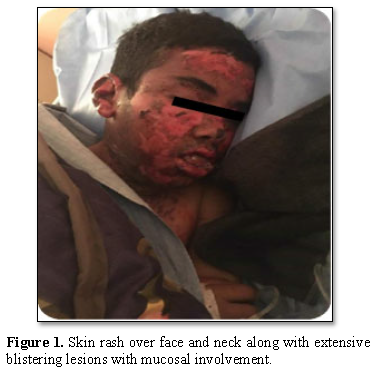 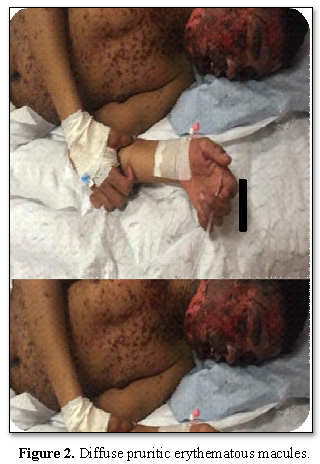 DISCUSSION
SJS is a rare but life-threatening delayed hypersensitivity reaction (type IV) [7]. Schematically, SJS is characterized by skin detachment affecting less than 10% of the body surface with erosions of the mucous membranes. In lyell syndrome, skin detachment involves more than 30% of the body surface and overlapping forms have skin detachment ranging from 10 to 30% [8]. The SJS is a mainly drug- induced phenomenon in which 85% of the cases a drug is incriminated [9].
Taking a thorough medical history is crucial to this process and can be life- saving [7].
LTG is one of the high-risk drugs known to cause SJS [10]. The risk of skin reactions rises when the primary dose of LTG is high, when doses are hastily increased and when used in co- administration with VPA [11], as VPA can reduce LTG clearance by 54% in duel therapy [12]. The inhibition of LTG by VPA is concentration-dependent [13,14], with a maximum inhibitory effect can be expected at VPA doses of approximately 500 mg per day [15]. LEV has no effect on LTG clearance in dual therapy and does not interfere with the inhibitory effect of AVP in triple therapy [12]. Our patient was on1500mg per day of VPA before and during the combination with LTG suggesting maximum inhibitory effect. The recommended initial dose of LTG for patients taking simultaneously VPA is 12.5 mg/day (25 mg given every other day) for the first two weeks, followed by 25mg once a day for the next two weeks [16]. Where as in our case the initial dose was 25mg per day and it was increased to 50mg per day the following week. All of these circumstances could promote the development of this syndrome. Numerous studies have reported cases of LTG-induced SJS, particularly with the concomitant use of VPA (Table 1). They have shown that there is a need to monitor the blood levels of these antiepileptic drugs.
Accountability makes it possible to formalize and clarify the assessment of the causal link between the taking of a drug and the occurrence of an adverse effect and, as such, is an aid in clinical practice for the diagnosis and management of an adverse effect in a given patient [27]. This operation implicates the entire pharmacovigilance system, since without reporting, there is no accountability or monitoring of drugs in the general population [28].
SJS occurs between the 5th day and the 8th week due to the delay required to activate the body's immune response [29]. The imputability of LTG has been retained in a suggestive timeline. Using the updated French imputability method, which is an algorithmic method based on the evaluation of eight criteria divided into intrinsic (chronological and semiological) (Figure 3) and extrinsic (literature data) factors. 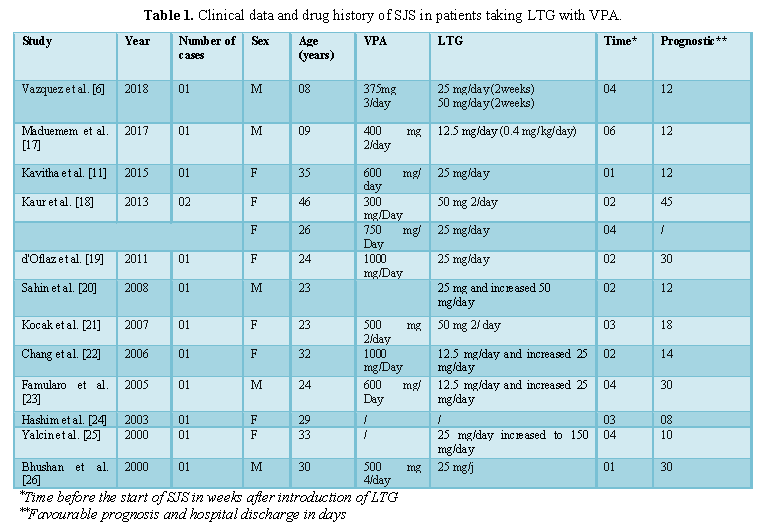 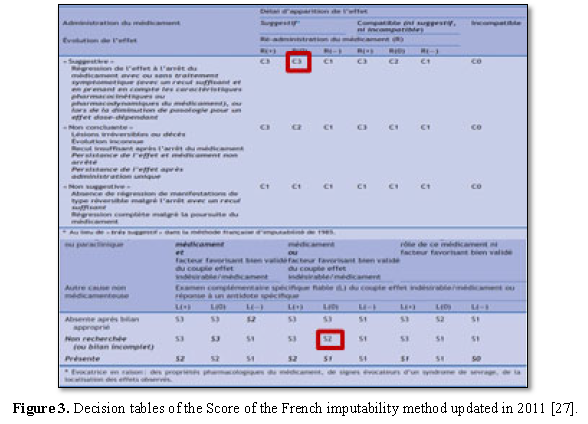 CONCLUSION
This clinical case reminds us that only a rational prescription of anti-epileptic drugs can reduce the risk of dermatologicalaccidents.The concomitant use of VPA and LTG can double the concentration of the latter, so a 50% reduction of LTG is recommended. Our pharmacovigilance survey encourages monitoring the blood concentration of antiepileptic drugs at the beginning of a new treatment with LTG. The calculation of imputability is not always easy, so a declaration of adverse effects must be actively carried out through the patient's electronic file in the pharmacovigilance service.
CONFLICT OF INTERESTS
The authors declare that they have no conflict of interest in connection with this article.