Research Article
A Case of an Extremely Rare Presentation of Carcinoma Breast Presented Without Lump
Breast cancer is a global burden. According to World Health Organization, breast cancer is the most common cancer among women worldwide, claiming the lives of hundreds of thousands of women each year and affecting countries at all levels of modernization. It accounts for 18% of malignancy worldwide. This paper presents a rare case of breast carcinoma that presented with only dimpling of skin and no lump. The workup, diagnosis of the patient along with appropriate surgery and chemotherapy is described.

Breast carcinoma is a heterogeneous disease that comprises a lot of distinct entities with different characteristics. It accounts for 18% of malignancy worldwide. In this paper a case of breast carcinoma presented only with dimpling of skin and without any lump is described and the decisions made in diagnosing and management of the patient with appropriate surgery and chemotherapy.

Breast carcinoma is the most common malignancy among women, and accounts for more than one million cases occurring worldwide annually [1-3]. In India, it is the second most common cancer among females. Breast cancer accounts for 19-34 % of all cancer cases among women in India. Though it can be detected early by self and clinical breast examination or mammography, in India only 15% patients present in the localized stage and whereas in 75% patients regional lymph nodes are already involved while 10% already have distant spread at the time of reporting. Early detection and prompt treatment give a good chance of long term survival. Breast self-examination (BSE) is an important viable optional substitute for early detection of cancer.

45 years old female presented to OPD with complaints of burning sensation in the right-side axilla for 6 months. History of dimpling of the skin over right breast was given, along with history of pain present over the site of dimpling. There was no h/o of any lump in breast/nipple discharge. On local examination of right breast, dimpling in lower outer quadrant of breast was identified. Another dimpling was seen over right axilla beneath which there was a 1.5X 1.5 cm hard fixed solitary lymph node in right axilla. FNAC of lymph node revealed carcinoma of right breast with metastasis in right axillary lymph node. Mammogram showed a well-defined hypoechoic micro calcification lesion measuring 0.8x0.7 cm noted below right nipple suggesting of a possible mass lesion with axillary lymphadenopathy (Figures 1 and 2).

Complete bone scan was done which showed negative for metastasis. USG abdomen was normal. Patient was staged as III B (T4b N2 M0). Two cycles of neoadjuvant chemotherapy were given following which there was decrease in the size of the lymph node and it became mobile. Patient was taken up for Modified radical mastectomy.
Histopathology report showed invasive ductal Carcinoma breast of right side with metastatic deposits in lymph nodes [stage III A(AJCC)]. ER, PR statuscamepositive, HER2 was negative. Post operatively patient was continued with 4 cycles of adjuvant chemotherapy. Patient was started on tamoxifen and regular follow up is being done (Figure 3). 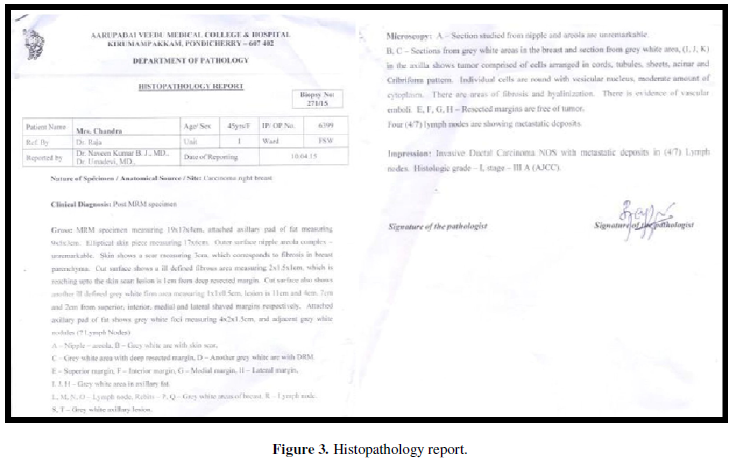 The aim of this article is to highlight an uncommon case of breast cancer with an atypical clinical presentation. Imaging is crucial for the identification and local staging of the lesion, guiding tissue diagnosis, and follow-up while the interventional approach (biopsy or surgery) is relied for making the final diagnosis. On Consideration of the radiological features of the right breast mass (well-defined margins, hypo echoic lesion, presence of posterior acoustic shadowing) the diagnosis of an advanced breast carcinoma or a malignant lesion could be suspiciously made.

It may be difficult on FNAC to differentiate between benign and malignant lesions, because FNAC as well as trucut biopsy of a lesion mainly identifies the lesion in the center whereas invasion is at the periphery.

A breast cancer is called as metastatic when the tumor spreads beyond the breast, chest wall, and ipsilateral regional lymph nodes. According to the basis of the available clinical data and the metastatic work up we arrived at a conclusion that it is a locally advanced carcinoma. The most common sites for breast cancer metastasis include the bone, lung, liver, lymph nodes, chest wall, and brain [4] which were all ruled out using appropriate investigations.

Use of tamoxifen in patients with ER+ disease reduce breast cancer mortality by about a third throughout the first 15 years (RR 0. 71 up to four years, 0.66 during years five to nine, and 0.68 SE 0.08 during years 10 to 14; p
The five-year overall survival for women with stage I breast carcinoma is 100 percent, for stage II it accounts around 93 percent, for stage III it is 72 percent, for stage IV 5-year survival rate is 22 percent. There is a need for awareness for women about breast carcinoma, and to enhance early detection of breast cancer. There is a high mortality due to late presentation of patients at an advanced stage because of lack of awareness and lack of breast cancer screening programs [6-9].
Screening should be performed once every 2 years for women aged 50 to 75. Screening over the age of 75 should be individualized and based on health. For older women, the target of screening should be invasive cancers and not in situ disease. For women in their 40s, if screening is to be pursued, annual screening is probably the proper interval, given that faster growing tumors are more common in younger women [10,11].
CONCLUSION
In this case report, we demonstrate a case of carcinoma of the breast without any obvious lump with ipsilateral   axillary spread, rare by definition.
Clinical breast cancer research should be focused on effective methods to detect breast cancer at its earliest stages and on selection of appropriate standardized treatments to cure the disease after diagnosis.
Meticulous diagnosis and appropriate management at early stages of breast carcinoma aides to improve the longevity of the patient with an improved quality of life (Figure 4). 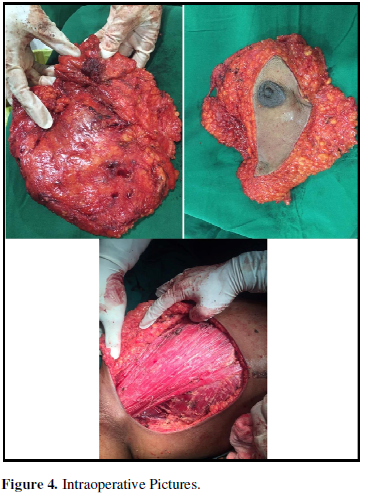