The use of transpubic approach for urethroplasty, initially described by Pierce in 1962, for complex urethral strictures has faded over the past few decades. With most surgeons opting for the partial perineal pubectomy, the only indications for transpubic urethroplasty are long segment strictures following pelvic fracture with urethral injury (PFUI) and paraurethral bladder base fistulae. Herein, we present an interesting case where a combined abdomino-perineal approach has been used for a patient with long segment stricture post open prostatectomy.

Investigations revealed a 2.5 - 3 cm stricture involving the membrano-prostatic urethra (Figure 1). An elective suprapubic cystostomy was done for the patient prior to surgery. A combined abdomino-perineal approach transpubic urethroplasty was performed in view of a long segment stricture in the posterior urethra in order to achieve tension free anastomosis. It also provided for an excellent and wide exposure for creating a bulbo-prostatic urethral anastomosis under vision. A layer of omentum was wrapped around the anastomosis to avoid callus formation near the anastomosis. Figures 2-13 illustrate the sequential steps of this procedure in our patient. Six weeks post surgery, patient’s per urethral catheter was removed and patient was able to void with a good flow rate (Figure 14). Patient had an uneventful and complete recovery.

The keys to a successful repair in these patients are adequate exposure of the pelvic anatomy, maintenance of vascularity, creation of new bladder base opening for urethral anastomosis and creation of a tension free watertight anastomosis. Careful planning and meticulous operative techniques using transpubic approach provide for an excellent, wide exposure for creating a tension free bulbo-prostatic urethral anastomosis under vision, with minimal risk of pelvic instability. 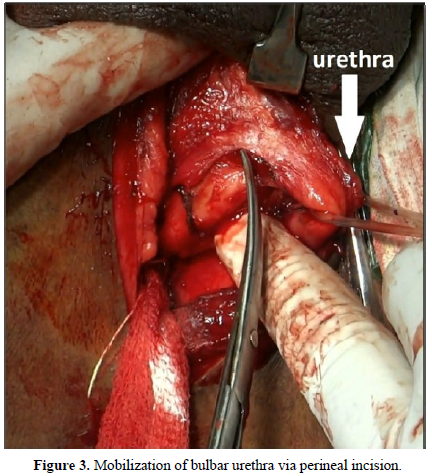 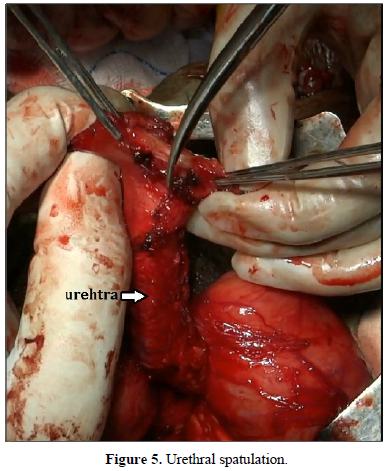 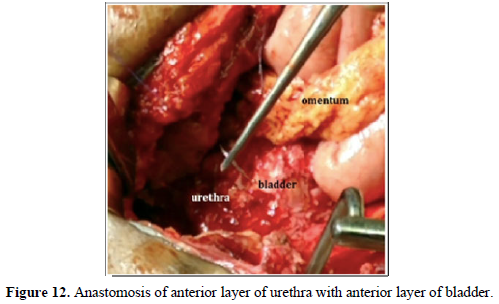 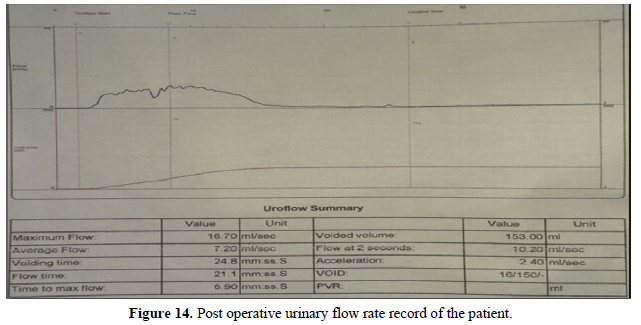