Mini-Review
Pancreatic Panniculitis: A Rare Manifestation of Pancreatic Disease
Pancreatic panniculitis is a very rare complication associated with pancreatic disease, appearing in approximately 2 to 3% of all patients, most commonly those with acute or chronic pancreatitis, but also in patients with pancreatic carcinoma. Clinical manifestations include painful erythematous nodules, which usually develop on the lower limbs.  The pathogenesis is not fully understood, but it seems that the release of high amounts of pancreatic enzymes may lead to a focal necrosis of lipids and a concomitant inflammatory reaction. The histological hallmark of pancreatic panniculitis is the presence of “ghost cells”. The treatment is mainly directed towards the underlying pancreatic disease, which may result in regression of skin lesions. This review of literature aims to present current knowledge on pancreatic panniculitis.

Keywords: Pancreatic Panniculitis, Pancreatic Fat Necrosis, Enzymatic Panniculitis, Ghost Cells
INTRODUCTION
Fist described in 1883 by Chiari [1], Pancreatic panniculitis (PP), also known as pancreatic fat necrosis and enzymatic panniculitis, is a rare necrosis of subcutaneous adipocytes triggered by inflammatory, traumatic or malignant pancreatic disease.
While rare, skin signs associated with pancreatic disease may lead to an early diagnosis or predict the severity of the underlying illness and clinicians should be aware of these cutaneous signs in pancreatic pathology in order to recognize them and appropriately direct management [2].
In the review, we discuss the clinical characteristics, treatment and prognostic value of the lesions.
EPIDEMIOLOGY AND ETIOLOGY
PP occurs in 2-3% of all patients with pancreatic disease [3]. PP is usually described in association with benign pancreatic conditions, such as acute or chronic pancreatitis. Acute pancreatitis is the most common cause of PP, mainly secondary to alcoholism, cholelithiasis, drugs or trauma [4-6]. It is less usually described in association with pancreatic carcinoma: usually of the acinar cell carcinoma (in 80% of cases), which represents 10% of pancreatic malignant tumours [5,7], although it has been reported in the course of some other carcinomas, such as ductal adenocarcinoma and neuroendocrine carcinoma [3].
Other less frequent pancreatic abnormalities that have been described in association with PP include pancreas divisum, pancreatic pseudocysts, vasculopancreatic fistulas and pancreatitis secondary to sulindac intake [3].
PP may present during pancreatic disorder or may be diagnosed before the underlying disease about 40% of the time [8]. Skin lesions may precede the detection of the pancreatic disease by about 1-7 months and in cases of malignancies, it may be associated with increased risk of metastasis and/or associated with disease severity [6,9].
PP is typically diagnosed in older patients. The median age at the diagnosis is 60 years, however, it can potentially appear at any age [4]. PP has a male predominance (M:F = 4:1) but this is most probably due to a higher prevalence of conditions like chronic pancreatitis in male patients and does not result from an impact of gender on pathogenesis [8].

PATHOPHYSIOLOGY
The exact pathophysiology of PP is poorly understood because detailed mechanistic studies are lacking and are not easy to perform in view of the rarity of the condition [4]. It is thought that the release of pancreatic enzymes (trypsin, lipase, amylase) in the bloodstream may be involved in increasing the vessel permeability with consequent neutral fat hydrolysis to form glycerol and free fatty acids, and finally producing fat necrosis and inflammatory response [2]. Lipase activity seems to be more relevant; this is supported by the numerous cases with normal amylase levels reported and by the finding that the necrotic tissue stains positive for lipase [10]. However, lipase levels are not the only factor implicated, as the relative frequency of pancreatitis with high serum lipase levels contrasts with the rarity of pancreatic panniculitis, and there are some PP cases in the literature that have been described with normal serum levels of all pancreatic enzymes [3], supporting the likely involvement of other unidentified factors in the causality of this entity. Immune complexes and release of inflammatory cytokines (especially adipokines) have also been proposed as possible pathogenic mechanisms [2]. Also, both skin and pancreatic inflammation share phospholipase A2 as a mediator, which could be targeted as with therapy in some inflammatory conditions [11].
DIAGNOSTIC PROCEDURES AND DIFFERENTIAL DIAGNOSIS
Clinically, PP usually presents with erythematous-violaceus plaques and painful nodules predominantly located on the lower limbs (around the ankles and pretibial region), but which can also affect other areas like upper extremities, chest or scalp [12]. These cutaneous lesions may resolve spontaneously or, in advanced cases, can ulcerate, draining an oily brown, sterile, viscous substance due to liquefactive fat necrosis (Figure 1) [3]. 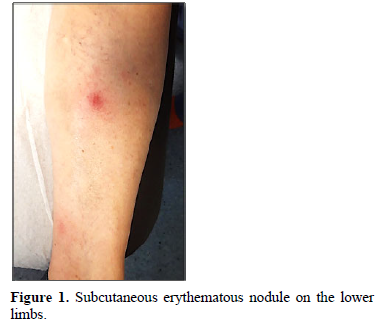 It is important to differentiate PP from others forms of panniculitis. The differential diagnosis includes erythema nodosum, lupus panniculitis, panniculitides in sarcoidosis, and erythema induratum of Bazin/nodular vasculitis [8].
Laboratory tests usually show pancreatic hyperenzymenia, leucocytosis and an increase of acute phase reactants. Eosinophilia and leukemoid reactions have been described in patients with pancreatic carcinoma [5]. Imaging exams are used to detect the underlying pancreatic disease.

The appropriate diagnostic tool for evaluation of skin lesions is a biopsy for anatomopathological study. Histopathological examination shows a mostly lobular panniculitis without vasculitis. But, in the very early stage, a septal pattern has been described, which results from enzymatic destruction of the endothelial septa, allowing pancreatic enzymes to cross from blood to fat lobules resulting in coagulative necrosis of the adipocytes, which leads to pathognomonic "ghost cells". These cells are anucleate necrotic adipocytes that have a thick wall with a fine basophilic granular material within their cytoplasm from dystrophic calcification. This is a result of saponification of fat derived to the action of pancreatic enzymes in subcutaneous fat and followed by calcification. In older lesions, “ghost cells" and fat necrosis decreases, replaced by granulomatous inflammatory infiltrate composed of foamy histiocytes and multinucleated giant cells [3,13].

Arthritis occurs in 50-80% of PP cases as a result of necrosis of the periarticular adipocytes [5]. Some authors have also described the association between pancreatitis, panniculitis and polyarthritis, named PPP syndrome [14].

Treatment of PP consists of identifying and addressing the underlying condition. Endoscopy or surgical therapy may be warranted, which normally leads to resolution of cutaneous lesions. Symptomatic relief with non-steroidal anti-inflammatory drugs is also recommended [15]. Some authors suggested that PP may also benefit from octreotide, a synthetic somatostatin-like polypeptide, which inhibits pancreatic enzyme production [16].

In the setting of pancreatic malignancy, resolution on PP has been reported with chemotherapy [17]. For oncologic therapy of ductal adenocarcinoma and neuroendocrine carcinoma, established treatment programs have been published in clinical guidelines [18,19]. For acinar cell carcinoma, which is a common cause of PP, systematic therapy studies are lacking. Whenever possible, complete resection should be intended [20]. However, this is often avoided by locally advanced tumor or metastatic spread already at diagnosis [21]. Chemotherapy protocols that have been used include FOLFOX, FOLFIRI, and FOLFIRINOX as well as gemcitabine-based regimens [17]. A recent review suggested that fluoropyrimidine-based chemotherapy might lead to a better outcome [21]. In unresectable cases without distant metastasis, chemotherapy is usually combined with radiotherapy [22]. Other approaches that have been reported in the metastatic situation include palliative treatment of liver metastasis with trans arterial chemoembolization (TACE) or resection [23,24].

Prognosis primarily depends on the underlying pancreatic disease and success in treating this condition. Concerning the skin manifestations, normalization of pancreatic enzyme levels subsequently leads to regression of panniculitis lesions in most cases [25,26]. Panniculitis seem to be a poor prognostic sign in malignant diseases. Patients with PPand underlying malignancy, on whom follow-up data was available, had a median overall survival of only 4 months. Even metastatic acinar cell carcinoma patients had a median overall survival of 17 months, while unresectable patients without metastasis and resectable patients survived 38 and 47 months, respectively [21].

Pancreatic pathology mainly presents with gastrointestinal symptoms and signs. However, it can also associate a wide range of extra-digestive manifestations and cutaneous involvement plays an essential role both as a diagnostic clue for the pancreatic disease itself and serving as a prognostic factor for the gravity of the condition.
Although PP is rare, it is important to consider in the differential diagnosis of patients presenting with panniculitis. The skin manifestation can precede, occur simultaneously with or follow the pancreatic disease and PP should always prompt screening of an occult pancreatic malignancy.

The exact pathophysiology of PP is becoming clear but not entirely comprehended. The pathogenic role of pancreatic lipase is endorsed by the findings of the enzyme in the areas of subcutaneous necrosis and anti-lipase monoclonal antibodies within the necrotic tissue [13]. Pancreatic disorders are much more commons when compared to PP which might indicated that there are still unrecognized factors involved in the development of pancreatic panniculitis.

The diagnosis of PP is suggested by the presence of pancreatic disease and clinical manifestations like ill-defined erythematous subcutaneous nodules more often localized in the lower extremities. Typical histopathological findings include subcutaneous lobular fat necrosis with a nuclear adipocyte called ghost cells.

The management of PP is primarily supportive and should be targeted to the underlying pancreatic disorder.

As more cases of PP are recognized and better characterized, the underlying mechanisms may also be better understood perhaps leading to better vigilance to its incidence, causes, prognosis and treatment.
Download PDF View PDF