Research Article
Scleral Tuck Lens: Simple and Cost-Effective Solution for Aphakia without Capsular Support
Visual rehabilitation in aphakia can be performed using several modalities. However, these modalities can be either technically difficult or expensive. In this study, we developed a scleral tuck lens to provide a simple and cost-effective solution for aphakia.
A specially designed posterior chamber self-sustaining lens was implanted in patients with aphakia without capsular support because of different etiologies. Visual outcomes as well as intraoperative and postoperative complications were examined.
A scleral tuck lens was successfully implanted for 10 eyes, resulting in satisfactory visual outcomes. 7 eyes regained >6/12 and 1 eye 6/60. The anatomically stable lens was placed in the posterior chamber, which is closer to ideal location.
Satisfactory visual outcomes were noted with minimal complications; however, long-term follow-up is required.
Keywords: Scleral tuck lens, Aphakia, Secondary lens implant
INTRODUCTION
Cataracts account for 47% of all cases of blindness worldwide. The epidemiological effect of cataracts is uneven among different countries, and the same is associated with economic conditions. Availability of health care facilities in developing countries, making cataracts a major public health problem and an obstacle to development [1].

Posterior capsular rent is one of the most common complications preventing satisfactory visual outcomes [2].

Rehabilitation of the aphakic eye is a crucial challenge. Aphakia is one of the common problems encountered in patients with trauma. Aphakia can be the end result of complete loss of the lens and capsular support during the trauma itself, or aphakia can be caused by zonular dialysis or lens subluxation beyond a few clock hours in which case capsular support or implantation of the posterior chamber lens can be inadequate. In some cases, performing intracapsular cataract extraction or pars plan lensectomy is required for managing the cataract. In these cases, the only treatment option is the implantation of a secondary lens. Secondary lens implantation can be performed by implanting an intraocular lens (IOL) on the remnant of the capsule, an iris-supported lens, an angle-supported anterior chamber IOL, or a scleral fixated IOL either with sutures, glue, or any other technique [2].

Studies have attempted implanting scleral fixated lenses with prolene sutures, iris-supported lenses, and glued lenses; however, the implantation of all these lens types have a long learning curve and is not cost effective [2,3].

In the current study, we designed a self-sustaining lens that does not require any suturing.
METHODS

We designed an acrylic foldable lens, which would be suspended with the sclera without using any suture or glue. Figure 1 shows the current lens, having a horizontal size of 14 mm, an optical diameter of 6.5 mm, and acrylic tags connected with main optics with the neck. Tag size is 20 G (0.89 mm) with hole. 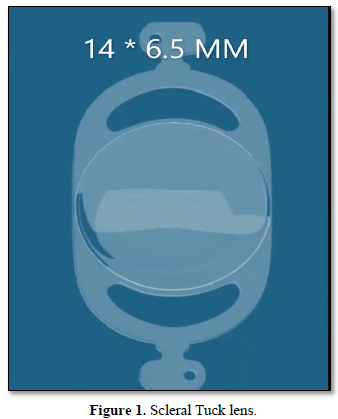 In aphakic eyes, following anterior vitrectomy, scleral flaps were created using a crescent blade after hemostasis. A 23G forceps was used to create an opening under both the flaps. The foldable lens was inserted into the anterior chamber. Then, acrylic tag was handed over by using 23G forceps, the tag was pulled out through the opening on both sides, (Figures 2 and 3) and the posterior chamber self-sustaining scleral fixated lens was implanted in place. The lens tag was covered by the scleral flap (Figure 4).

We compared the outcome results of sutured fixated scleral supported lenses according to etiology (Figure 5). 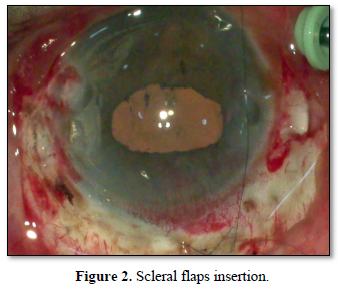 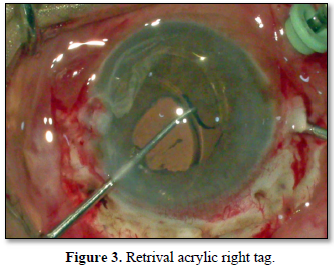 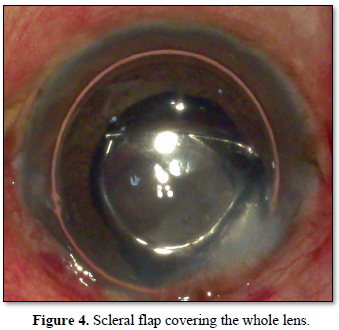 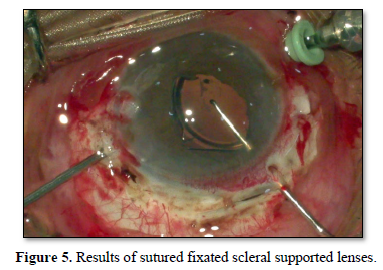 Our cohort consisted of 10 eyes out of which 7 were male and 3 were female we performed this procedure in 2 aphakic eyes and eyes with post trauma nucleus drop. On following up, the best corrected visual acuity of the eyes was found to be good. Out of total 6 eyes regained >6/12 and one eye had 6/60 because of co morbidity following trauma.

Until now, no intraoperative or postoperative complications have been noted.

Current technique presents a novel design lens for management of aphakia in absence of posterior capsule. We have observed many such studies it will be interesting to compare their results with current lens design.

David et al. [13] studied the use of an angle-supported anterior chamber lens for long-term effects and suggested serious complications on long-term follow-up [14]. Many studies have reported regarding the use of iris-supported lenses to correct aphakia [15-17]. Other studies have also reported the efficacy of an artificial iris IOL in case of anorexia or traumatic conditions [18-20].

Shah et al. [2] did not find any significant difference if the secondary implant was placed either in the anterior chamber or sulcus following proper vitrectomy.

Lewis’s [23] reported that burying of knots inside the eye is associated with a low incidence of suture erosions. Elfiky’s [24] studied the role of ultrasound bio microscopy as a guide before performing a secondary implant [24].

Kumar et al. [30] conducted a comparative study of various techniques of implanting scleral fixated secondary lenses and found it to be the most effective with minimal complications.

To the best of our knowledge, no study has used the lens design that we used in the current study. The self-retaining scleral supported lens used in the present study has many benefits including a small learning curve, easy to perform technique, and low cost owing to no requirement of glue. Moreover, the incidence of complications is minimal.

This novel technique can be useful to manage aphakia in absence of capsular support, Benefits are very cost effective, and it has smaller learning curve it has minimal intra and post-operative complications but needs longer follow up.

Current lens has potential to provide perfect solution for optical rehabilitation of aphakia.

There are many options for scleral fixated lenses available.