Research Article
Development and Validation of Chromatographic and Spectrophotometric Methods for Estimation of Drugs for Chronic Obstructive Pulmonary Disease in Pressurized Meter Dose Inhaler
Purpose: Formoterol fumarate and Glycopyrronium bromide combination is used for chronic obstructive pulmonary disease and newly introduced in market. It is necessary to develop suitable quality control methods for rapid and accurate determination of these drugs.  The study aimed to develop and validate RP-HPLC and first order derivative spectrophotometric methods for simultaneous estimation of these drugs in pressurized meter dose inhaler.

Method: The first method RP-HPLC was developed by the isocratic technique on a reversed-phase enable C-18 column and mobile phase acetonitrile: phosphate buffer pH 5.0 (40:60 v/v). The retention time for Formoterol fumarate and Glycopyrronium bromide was 4.8 min and 6.6 min, respectively. The linearity of the calibration curves for each analyte in the desired concentration range was good (r2 > 0.999) by both the UV and RP-HPLC methods. The second method was based on first order derivative spectrophotometric method where sampling wavelengths were selected at 240.40 nm (zero crossing point of Formoterol fumarate) where Glycopyrronium bromide showed considerable absorbance and at 261.60 nm (zero crossing point of Glycopyrronium bromide) where Formoterol fumarate showed considerable absorbance.

Results and Conclusion: The method showed good reproducibility and recovery with percent relative standard deviation less than 2%. Moreover, the accuracy and precision obtained with RP-HPLC co-related well with the UV method which implied that UV spectroscopy can be a cheap, reliable and less time-consuming alternative for chromatographic analysis. The proposed methods are highly sensitive, precise and accurate and hence successfully applied for determining the assay of a marketed formulation.
Keywords: Formoterol fumarate, Glycopyrronium bromide, First order derivative, RP-HPLC, Validation
INTRODUCTION

GLY is a synthetic anti cholinergic agent with a quaternary ammonium structure. It reduces secretions in the mouth, throat, airways, and stomach before surgery. It used along with other medicines to treat peptic ulcers [3]. The deep literature review revealed that various analytical methods like spectrophotometric, HPLC, HPTLC, stability indicating HPLC, LC-MS and other methods are reported for estimation of FF and GLY individually and in combined with other dosage form and in biological fluids but none of the analytical method is reported for simultaneous estimation of both the drugs in combined pharmaceutical dosage form [4-38]. 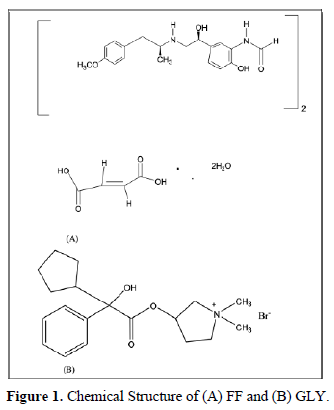 Therefore, there is a challenge to develop RP-HPLC and UV spectrophotometric method for the simultaneous estimation of Formoterol fumarate and Glycopyrronium bromide. The present study was involved in a research effort aimed at developing and validating a simple, specific, accurate, economical, and precise RP-HPLC and UV spectrophotometric method and for the simultaneous estimation of two drugs in pharmaceutical dosage form.

The analysis was carried out on a HPLC system (Shimadzu-LC 20AT) equipped with UV detector, pressure controlled by prominence pump and operated by LC solution. Enable C18 column (250 mm × 4.6 mm i.d., particle size 5 μm) was used for separation. Mobile phase used for separation was mixture containing acetonitrile: phosphate buffer pH 5.0 (40:60 v/v). The flow rate was kept at 1.0 mL/min, column temperature was ambient (25°C), eluents were detected by UV detector at 220 nm, and the injection volume was 20 μL.

Optimal composition of the mobile phase was determined to be acetonitrile: phosphate buffer pH 5.0 (40:60 v/v). The mobile phase was filtered through nylon 0.46 µ membrane filter and was degassed before use (30 min). Stock solution was prepared by dissolving FF and GLY (10 mg each) that were weighed accurately and separately transferred into 100 ml volumetric flasks. Both drugs were dissolved in 25 ml of mobile phase to prepare standard stock solutions. After the immediate dissolution, the volume was made up to the mark with mobile phase. These standard stock solutions were observed to contain 100 µg/ml of FF and GLY. Appropriate volume from this solution was further diluted to get appropriate concentration levels according to the requirement. From the above stock solutions, dilutions were made in the concentration range of 0.5-3.0 µg/ml and 1.0-6.0 µg/ml of FF and GLY, respectively. A volume of 20 µL of each sample was injected into column.

15 mM potassium dihydrogen phosphate buffer of pH 5.0 was used for method development.  Buffer was prepared by dissolving 2.04 g of potassium dihydrogen phosphate by diluting with Mili-Q water to 1000 ml. The pH was adjusted by 10 M potassium hydroxide using pH meter (Chemiline CL-110, India). The prepared buffer was passed through 0.46 µ membrane filter (Milipore, USA) and the same was used for mobile phase preparation.

Mobile phase was prepared by mixing HPLC grade acetonitrile and 15mM potassium dihydrogen phosphate buffer (pH 5.0) in 60:40 (v/v) proportions. Mixture was shaken vigorously and sonicated for 30 min prior to use.

Stock solution (100 µg/ml) of FF, GLY and its binary mixture was prepared by adding accurately weighed 10 mg of FF and GLY and binary mixture of both drugs in 50 ml of mobile phase, then sonicated for 10 min and diluted up to 100 ml. Series of test solutions were prepared in the concentration range of 0.5-3.0µg/ml and 1.0-6.0 µg/ml of FF and GLY respectively, by diluting appropriate volume of the stock solution (100 µg/ml) with mobile phase. The dilutions were first vortexed and then used for further analysis.

The calibration curve was prepared by injecting concentration 0.5-3.0µg/ml of FF and 1.0-6.0 µg/ml of GLY and binary mixture solutions manually in triplicate to the HPLC system at detection wavelength of 220.0 nm. Mean of n = 6 determinations was plotted as the standard curve. The calibration curve was tested by validating it with inter-day and intra-day measurements. Linearity, accuracy and precision were determined for both interday and intra-day measurements.

Methanol of analytical reagent grade was selected as a common solvent for developing spectral characteristics of both drugs. The selection was made after assessing the solubility of both drugs in different solvents like water, methanol, chloroform etc.

Preparation of standard stock solutions of FF and GLY

Accurately weighed quantities of FF (10 mg) and GLY (10 mg) transferred to separate volumetric flasks (100 ml), dissolved in methanol (small quantity) and diluted up to mark with methanol (100μg/ml of FF and GLY individually).

Validation was carried out according to ICH guideline [40].

For studying the accuracy of the proposed methods, and for checking the interference from excipients used in the dosage forms, recovery experiments were carried out by the standard addition method. This study was performed by addition of known amounts of FF and GLY to a known concentration of sample solution. The amounts of standard recovered were calculated in terms of mean recovery with the upper and lower limits of % RSD.

The precision of the instrument was checked by repeated scanning and measurement of absorbance of solutions (n = 6) for FF and GLY without changing the parameter of the proposed spectrophotometry methods.

Limit of detection (LOD) and limit of quantitation (LOQ)

Limit of detection (LOD) and limit of quantitation (LOQ) were calculated according to the 3s/m and 10s/m criterions, respectively, where s is the standard deviation of intercept (n =6) of the sample and m is the slope of the corresponding calibration curve.

The method specificity was assessed by comparing the chromatograms (HPLC) and scans (UV) obtained from the drug and the most commonly used excipient mixture with those obtained from blank (excipient solution in water without drug).

Analysis of FF and GLY in pressurized meter dose inhaler

The pressurized canister was removed from the actuator, and the label and ink were removed from the canister with a suitable solvent. The canister was wiped with tissue paper. The pressurized canister was removed from the actuator, and the stem and valve were cleaned by the diluent. A stainless steel base plate (with three lags and a central circular indentation with a hole about 1.5 mm in diameter) kept inside the 100 mL glass beaker, had about 50 mL of methanol added to it, which insured that the discharge volume did not drop below 25 mm under the surface of the solvent. The pressurized canister was shaken for 15 seconds in an inverted position. The canister was placed invertedly in the hole of the stainless-steel base plate, discharged one spray, and then waited for two seconds. The container was shaken for at least five seconds. Once again, the canister was discharged. The same procedure was repeated another eight times. The pressurized container was removed and washed along with the valve and stem with five to ten mL of diluent. The washing solution was collected in the same 100 mL beaker. The entire beaker (holding solution from two to three washings) content was transferred to the 100 mL volumetric flask. This solution was then diluted up to the mark with methanol and mixed well. Then filtered it through nylon 0.45μ filter and absorbance taken. Aliquot of this solution was diluted to produce the concentration of 4.8 µg/ml for FF and 9 µg/ml for GLY (n = 6). The absorbance of sample solution was measured and the amount of drug present in the sample solution was calculated in the same manner as that of pure mixed standard solution.

RP-HPLC and UV-Spectrophotometric methods were developed for FF and GLY which can be conveniently employed for routine analysis in pharmaceutical dosage forms and will eliminate unnecessary tedious sample preparations. The chromatographic conditions were optimized in order to provide a good performance of the assay. The retention times (Rt) of FF and GLY were 4.8 min and 6.6 min, respectively. The system suitability parameters were shown in Table 1. The chromatograms have been shown in Figure 2. 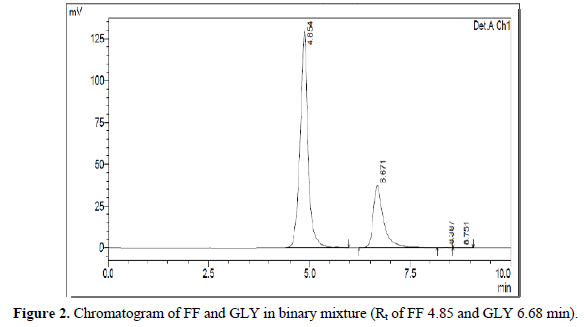 A six-point calibration curve was constructed with working standards and was found linear (r2 = 0.999) for each of the analytes over their calibration ranges. The slopes were calculated using the plot of drug concentration versus area of the chromatogram (Figures 3 and 4). The developed RP-HPLC method was accurate, precise, reproducible and very sensitive. Figures 5, 6 and 7 shows Overlain UV spectra of FF and GLY (Simple and first order derivative spectra). 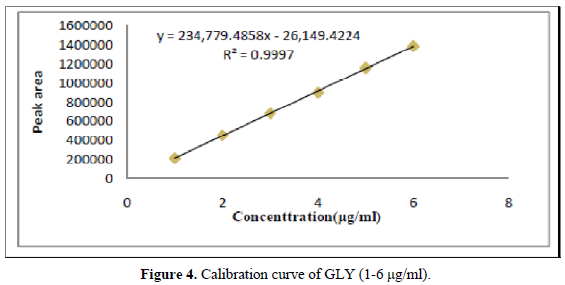 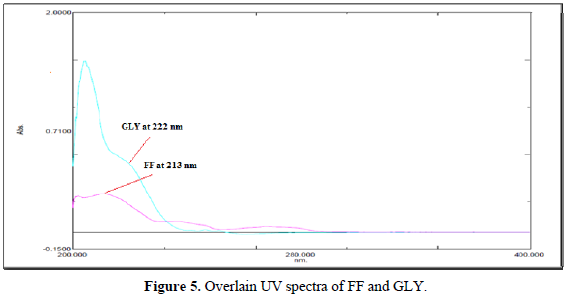 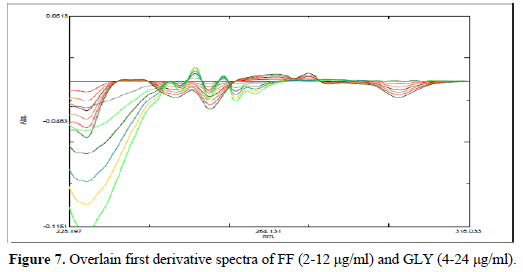 The regression coefficient of the correlation equation curve was greater than 0.999 (Table 3) and the method was validated with less than 2% RSD (Table 2). All the method validation parameters are well within the limits as specified in the ICH Q2B guidelines as shown in (Table 3). The intra- and inter-day precision (%R.S.D.) at different concentration levels was found to be less than 2% (Table 4). 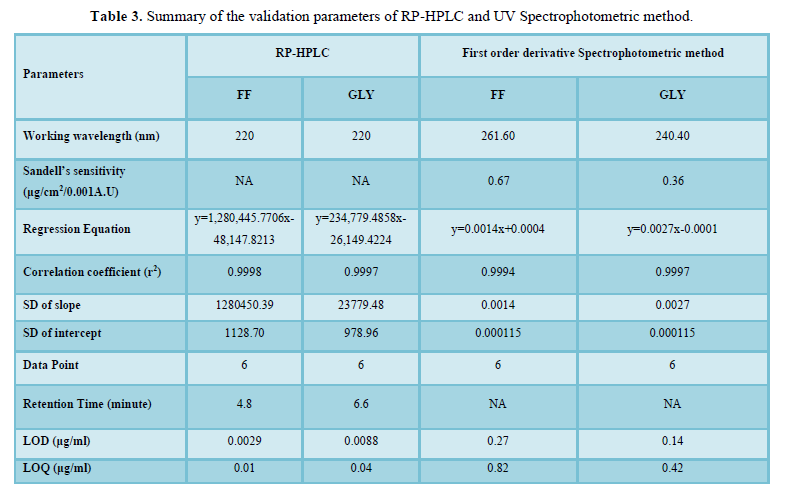 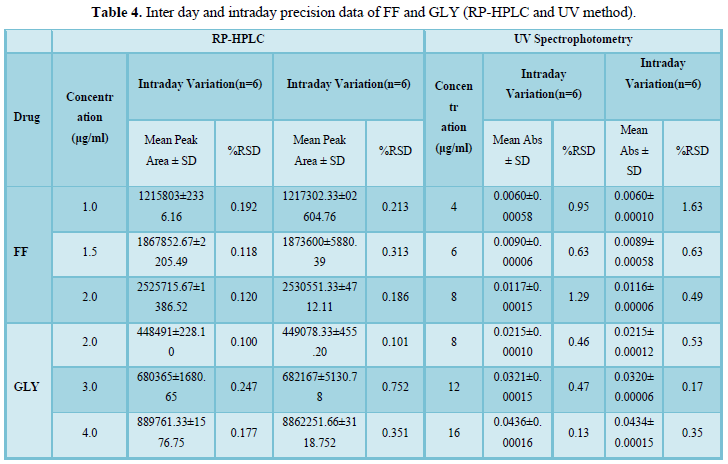 Table 5 lists the percent recovery (content uniformity) of both drugs in the commercial formulations by RP-HPLC and UV methods. Moreover the %R.S.D. (less variation) shows good precision of both developed methods.
Table 6 shows the robustness study of FF and GLY. % RSD value for all changed parameter was found to be within limit. Hence, it can be considered that the proposed method is robust. 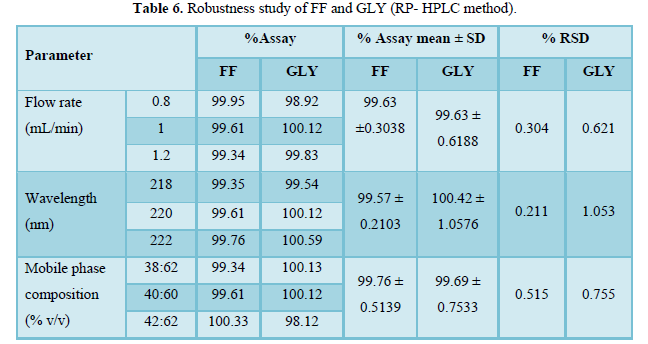 Statistical comparison was done on assay results obtained from UV and HPLC methods for marketed formulation by using student’s t-test. Calculated values for t-test were 2.01 for both FF and GLY which is less than t table value (3.15) indicating that there was no significant difference between the RP-HPLC and UV method.
CONCLUSION

Simple, rapid, accurate and precise RP-HPLC as well as first order derivative spectrophotometric methods have been developed and validated for the routine analysis of FF and GLY in API and pressurized meter dose inhaler. Both methods are suitable for the simultaneous determination of FF and GLY in multi-component formulations without interference of each other. The developed methods are recommended for routine and quality control analysis of the investigated drugs in two component pharmaceutical preparations. The amount found from the proposed methods was in good agreement with the label claim of the formulation. Also, the value of standard deviation and coefficient of variation calculated were satisfactorily low, indicating the suitability of the proposed methods for the routine estimation of pharmaceutical dosage form.

The authors express their sincere thanks to, Sun Pharmaceutical Pvt. Ltds., Vadodara and Vav Life Sciences Pvt Ltd., Mumbai, India for supplying the gift samples of Formoterol fumarate and Glycopyrronium bromide, respectively. Authors also extend their thanks to the management, Pioneer Pharmacy Degree College, Vadodara for providing the facilities to carry out the present work.
Download PDF View PDF