Research Article
REGIONAL TOURISM DEVELOPMENT A REVIEW OF CHALLENGES & TRENDS IN EAST AFRICA
Tourism as an emerging industry is an important economic sector for Africa. The WTTC research found that tourism in Africa was mainly (71%) leisure-driven, with the remainder (29%) being business-driven. According to the United Nations World Tourism Organization, Africa received 71.2 million international arrivals in 2019 amounting to about US$ 40 billion in revenue. Domestic tourism contributed 56% with international tourism contributing 44% to Africa’s tourism industry. Pre-Covid, demand in tourism products had significantly increased and both private and public sectors channeled their resources into the industry. However, the tourism industry has been heavily impacted by the pandemic as people’s economic lives are halted and their freedom of movement curtailed. Chiefly among these impacts on African economies is the reduction in foreign income especially in countries dependent heavily on international tourism. Therefore, the view of promoting a strong regional tourism is necessary. Some of the reasons why African countries have remained closed to each other overall are largely due to fear of loss of jobs, security, trust and other legal requirements. In East Africa, the tourism sector lost more than $4.8 billion and 2 million jobs in 2020 due to COVID-19. The tourism sector contributes about 10% to East Africa Community (EAC) partner states’ gross domestic product (GDP). Results show that the East Africa’s tourism sector has persevered largely without the financial relief provided by governments in wealthier, more developed regions, with the continent’s smaller businesses in the sector most affected. The crisis has also exposed the region’s dependence on foreign travelers. This paper will use the East Africa region for the case study analysis. The paper will examine the significance of promoting regional tourism by providing access to member countries especially in the wake of the pandemic. The pandemic has forced most countries to aggressively consider promoting Africa to Africa-ns. The paper will also highlight some of the challenges East African governments may face in developing and promoting tourism products in future.

Keywords: Challenges, East Africa, Region, Tourism, Trends
INTRODUCTION
Tourism is a major world economic activity. Prior to the pandemic, travel & tourism (including its direct, indirect and induced impacts) accounted for 1 in 4 of all new jobs created across the world, 10.6% of all jobs (334 million), and 10.4% of global GDP (US$9.2 trillion). Meanwhile, international visitor spending amounted to US$1.7 trillion in 2019 (6.8% of total exports, 27.4% of global services exports) (www.wttc.org). The tourism industry offers many opportunities to invest in Africa's rich local communities, generate economic activity, and create employment opportunities for women and young people. By 2030, consumer spending in hospitality and recreation in Africa is projected to reach about $261.77 billion. Tourism has seen continued expansion despite many challenges; it has continued to be resilient. The tourism industry’s major function is to serve travellers. Its success depends on the positive inter-relationships of all sectors. It is hoped that this synergy among tourism service providers will translate to a positive experience to the individual tourist (Camilleri, 2018). Many countries, both developed and developing, have recognized the advantages international tourism can contribute to their development efforts (Dieke, 2020; Jenkins, 2015; Sharpley & Telfer, 2015). These advantages can be encapsulated in six areas: earning of foreign exchange, contribution to government revenues, creation of employment opportunities, generation of income, stimulus to inward investment and regional development. Destinations possess tangible characteristics and consist of a number of physical attributes, such as attractions, amenities, buildings, landscapes and so on. Destinations have different appeals to different markets. Some individuals love crowds, others love isolation and find crowded places unbearable. The appeal of the destinations is varied as they offer immense opportunities for tourism to be developed in almost any country, and in any region; provided that they are targeted at the appropriate market (Camilleri, 2018). In 2019, travel & tourism’s direct, indirect, and induced impact accounted for: US$8.9 trillion contribution to the world’s GDP, 1,460 million international tourism arrivals, 10.3% of global GDP, 330 million jobs (1 in 10 jobs around the world), US$1.7 trillion visitor exports (6.8% of total exports, 28.3% of global services exports) and US$948 billion capital investment (4.3% of total investment). It can therefore be said that global tourism is a major feature in the world economy (www.unwto.org 2020).
The origin countries in many tourism demand studies are usually more sophisticated countries or regions, such as the OECD countries or the EU-28 countries. However, within these regional/ economic compositions, some outliers are present. Origin countries usually investigated include the United Kingdom, United States, France and Germany. However, gradually, Asian-Pacific countries, such as China, Japan, Korea and Australia have attracted more attention. Much of the country choice would be dictated by data availability, author preference or specific international events. Destination countries are in many cases also part of the OECD or EU-28 countries, usually with a warmer climate such as Greece, Spain, Portugal and Italy, or island economies, including Hawaii (state) and Aruba. Recent research has also focused on countries with other attractions, including countries such as Macau and Hong Kong for shopping and casino visits. Concerning Africa, tourism demand studies have mainly focused on individual countries such as South Africa, Zimbabwe, Kenya, Egypt, Tunisia, Mauritius and Nigeria. Exploring more African countries or the continent as a whole or regionally has attracted less attention (Viljoen et al. 2019). According to (Christie et al.2014), Africa’s tourism is threatened by land availability, investor access to finance, taxes on tourism investments, low levels of tourism skills, lack of security and safety, high crime, public health, visa requirements, red tape and bureaucracy. Fundamental developments by governments regarding air transport infrastructure, appropriate accommodation and access to tour operators are therefore needed (Viljoen et al., 2019). 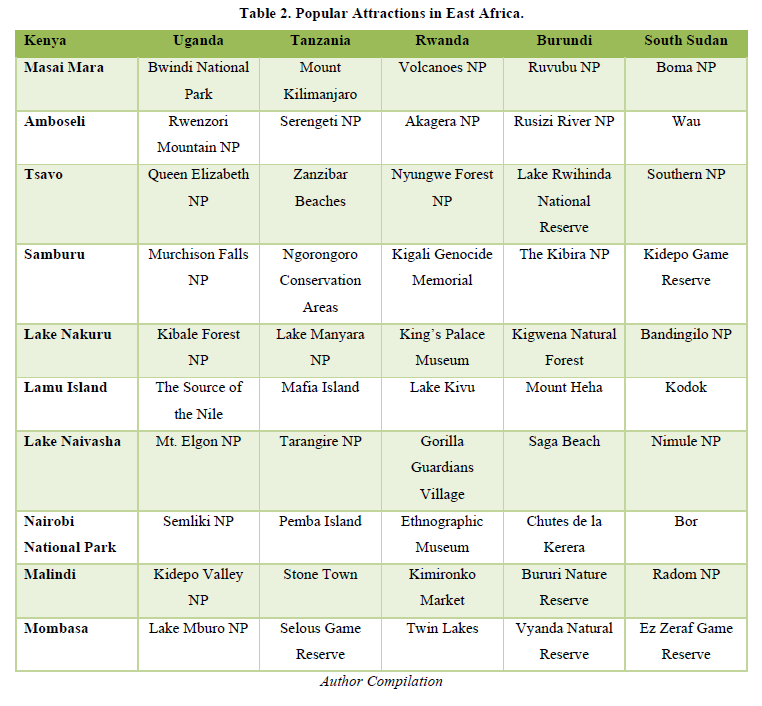