Research Article
THE INFLUENCE OF MEDIA COMMUNICATION ON THE FORMATION OF INDIVIDUAL’S OPINIONS STATE OF THE ART
The global media landscape is changing. The individual, in particular, always forms his opinion with the media (press, television, social networks, etc.). These media developments have an effect on the way we perceive information, guide as a society and make political decisions. The objective of this article is to reveal through this research how the media influence the formation of individuals' opinions. To do this, we will first highlight the role of the media, and then the relationship between the media and the opinion of individuals.

The media play an important role and influence the direction of public opinion, as well as the formulation of attitudes and behaviors through the news and information they provide (Trudel, 1990). Through that information, individuals can adopt a particular position or idea, which confirms the ability of the media to bring about changes to individual and societal practices and concepts through the dissemination of knowledge, the awareness of people and the clarification of different ambiguous elements, especially since these media have become an essential part of the lives of peoples and communities (Derville, 2017).

The media and their impact on the opinion and perceptions of individuals
The media have a profound impact on societies and their cultures (Deltombe, 2007). They put an end to the existing boundaries between different societies and between individuals and create what is called globalization. People can easily, through the media, witness what is happening in different nations, transmit their lifestyles, their ideas ...etc. The media is therefore a mine of information. They inform individuals of daily events or new revelations. This data is sometimes used to change people's feelings (Sheehy, 2011). For example, in the presidential race, supporters of certain candidates advertise on television, the internet (or otherwise), so that the person they want is elected. In order to raise awareness, the media use several elements that will touch, move, hit or shock. For this, they use various processes: for the written press it can be striking slogans with striking colors (Absolu, 2014). For radio, all that is needed is melodious or, on the contrary, brutal music. And finally, television and the internet bring all this together because they seek to touch all the senses, with the help of music, colors, images that mark the public...etc. Media can have both a positive and negative impact on people's lives and minds (Gallot, 2015). It depends on their perception, or according to their affiliations. Media communication can also play a constructive role in today's society, for example through public social awareness. The media message is usually intended for the buyer, in this case, the consumer buyer. Sociologist D. W. Smythe has indicated that the audience is what the mass media produce. However, other indirect targets are regularly targeted (Smythe, 1977), we quote: The user consumer: the one who will consume, use the final message.

The prescriber: the one who is certainly deemed capable of advising or influencing others in relation to the message consumed. According to Deltombe, there is a close relationship between the opinion of individuals and media communication, because the more the latter advances in the formulation of messages, the greater its influence on opinion (Deltombe, 2007). A reciprocal relationship exists between public opinion and the media, the main purpose of which is to provide the public with correct information and facts, in order to help them form a fair opinion on a public problem or issue (Mercier, 2012). Indeed, the media message includes information, programs, coverage, guests and political statements, which has a significant impact on the formation of individuals' opinions on issues concerning government, societies, everyday problems...etc. The literature describes a dizzying array of interactions between the public, leaders and the media, the complexity of which is illustrated in Figure 1 below. Even this highly stylized depiction of literature shows that the media influence the public.

Baum and Potter, two American researchers who work on the relationship between media and opinion, have shown in their article “The Relationships Between Mass Media, Public Opinion, and Foreign Policy: Toward a Theoretical Synthesis” that overall, public opinion influences the media and decision-makers who, for their part, exert an impact on said opinion in a reciprocal way, on events and media. The latter act on foreign policy (Figure 1). (Baum and Potter, 2008). In summary, the two specialists examined every conceivable causal link between the public, decision-makers (foreign and domestic) and the media. We believe that this network of causal arrows has become so dense that further examination of these narrow individual pathways should produce diminishing returns. 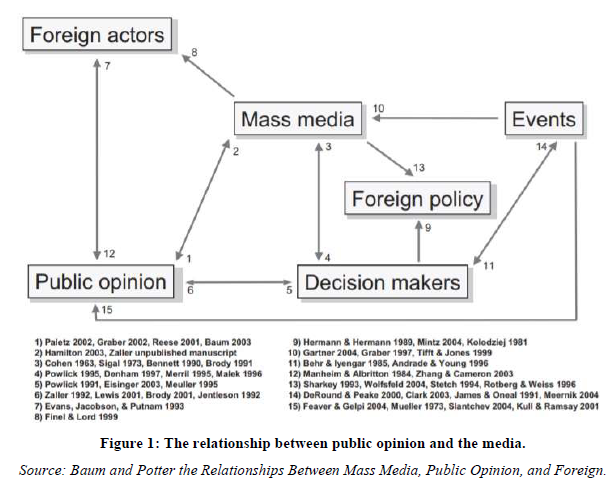 Policy: Toward a Theoretical Synthesis From the above, it is clear to us that the media are primarily responsible for the formation of individual opinion and public opinion. Indeed, the relationship between the two is here thought in terms of dependence, conditioning or manipulation, the receiver only passively absorbs the messages addressed to him (Derville, 1998). For Walter Liebman, the media was responsible for everything that happened, whether directing it to the people or subordinating officials to the authority of these media. It is the media that makes certain events happen and sometimes create important topics that make stars in all areas. Public opinion often seems to give in to the media, because people only get their information from these sources, so the person does not even have the ability to question what they say (Liebman, 1981).

Bourdieu and the question of public opinion
In his book On Television, Bourdieu revealed the role played by the media and in particular their impact on the visual, resulting from manipulation and influence on the minds of viewers and the way in which these means make it possible to form ideas and public opinion proportional to the dominant media (Bourdieu, 1996). He referred to the example of French television, which he saw as a place of control for journalists and that its screen forces all its guests to make concessions, as it imposes on them the strict restriction of the supposed duration of their speeches and other additional restrictions on program presenters who interact with the censorship imposed on them (Bourdieu, 1996). Bourdieu accused television of having committed symbolic violence against viewers because it exploits people's need for information and directs them to learn from it in order to satisfy that need. Television has thus allowed viewers to trust the content presented on its screen while neglecting some of the content of what is said in the written press. Bourdieu also spoke of the manipulation of events by on-screen journalists and the art they have at their disposal by concealing information and playing with terms. According to him, the use, for example, of the term revolution or massacre and the exaggerated use of these concepts attracts the viewer's attention, controls his senses and gives ordinary events great importance in order to achieve hidden goals, which is difficult to observe for ordinary viewers. To avoid being manipulated, Bourdieu said it was necessary to reformulate the terms by explaining the image until he obtained pure information without exaggeration. In the end, Bourdieu wonders who controls the media image? Politicians, intellectuals or capital and business strategy on television. He tried to draw the conclusions of this long research by stating that the content presented on television blatantly affects the audience, and that there are specialists in the formulation of events that are presented on the screen in such a way as to capture the viewer's attention and inject the emotions resulting from the presentation of the event, thus controlling his thinking. Bourdieu sees political authority as the only beneficiary of television's manipulation of viewers' minds to control public opinion and the community as a whole.

Texts critical of the media
After illustrating Bourdieu's analysis of the influence of media communication on the individual and on public opinion, we present in the following other authors who have criticized the role of the media towards their audiences.
Indeed, Harold Lasswell was the first researcher who became interested in the question of the power of the media and especially in the way propaganda influences individuals. In his book “Propaganda Technique in World War I (1927) Lasswell proposed a model called the hypodermic syringe model, the theory assumes that the media could directly and uniformly influence a very large group of people by injecting them with appropriate messages designed to trigger a desired response. The model suggests a powerful and direct flow of information from the sender to the recipient, assuming that media messages are injected directly into a passive audience that is immediately influenced (Lasswell, 1927). However, he must first ask himself a series of questions in order to adapt his communication action to the context:

Who says what? we must study the motivation and message of the sender; Through which channel? the broadcasting techniques through which the message passes (radio, press, TV, etc.); to whom? analysis of audiences by age, gender, etc.; with what effect? it is a question of determining the influence of the message on the audience.

Two authors of the Frankfurt School Theodor Adorno and Max Horkheimer, for their part, harshly criticized the mass media through a book called "The Cultural Industry" published in 1964. These authors have judged cultural production that influences the masses and only dishonors them (Cumming, 1972). They described the information offered by the media as poor and insignificant. Herbert Marcuse adopted the same theory of the Frankfurt School concerning the critique of the domination of technology over society. He described how tendencies to technological rationality produce a system of totalitarian social control and domination that allows individuals to be integrated into the system of production and consumption through the mass media (Marcuse, 1964). Regarding the reception of the media message, Paul Lazarsfeld, Bernard Berelson and Hazel Gaudet formulated a two-stage flow model in the book "The People's Choice", and after a study of the decision-making process of voters during the 1940 US presidential elections, they stipulated that the content of the mass media primarily reaches the "opinion leaders" and active users of the media who collect, interpret and disseminate the meaning of messages to the least active consumers (Postelnicu, 2018). The authors pointed out that opinion leaders collect information in the media, which they then pass on to the least active members of the public, which may be politicians, editorialists, trade unionists but also fathers or entrepreneurs, etc. Leaders therefore play a role of "gatekeeper" by filtering and simplifying messages to a wider audience. Lazarsfeld, Berelson and Gaudet concluded that word-of-mouth information plays an important role in the communication process, challenged the idea that the media have a strong power of influence, and instead advocated a view of the media with a low impact on individuals (Lazarsfeld et al., 1940).

CONCLUSION
After discussing the relationship between the media and opinion, we found that opinion is not formed freely, since several factors participate in its formation, and that it can be changed over time or according to events. An abundance of studies on changing opinions and individual attitudes have shown that individuals can change their stated beliefs after being convinced by persuasive arguments or following the opinion of another group. That said, what about the impact of individuals' opinions on the perception of the events around them and how these opinions can participate in the construction of attitudes and behaviors concerning the phenomena they experience in general and more particularly.
Download PDF View PDF