Research Article
EGYPT AIR STRATEGIC TURNAROUND DECISIONS FOR RECOVERY AND TRANSFORMATION
Egypt Air suffered from great losses as a result of the 25th of January 2011 Arab spring in Egypt. As a result of decline in travel demand to/from Egypt due to the political instability and security concerns, Egypt Air promoted transit traffic through Cairo hub but suffered further losses due to low yield of the connecting traffic.
Egypt Air initiated several strategic turnaround decisions to try to stop the performance decline and build for the future. The initiatives were followed with a restructuring project to reduce cost and increase efficiency.
A descriptive analysis of the strategic turnaround decisions and the restructuring program is carried out supported with an in-depth interview with Egypt Air executives to understand the nature of those decisions and the challenges facing Egypt Air in the future.
The Egyptian government should support Egypt Air transformation plan financially to be able to meet its obligations during this transition phase. After restructuring Egypt Air should seek a strategic partnership with a global carrier to be able to meet competition or arrange for a part IPO to be able to fund its future development and expansion. Several other initiatives regarding business process, employee training, talent recruitment, asset retrenchment should be addressed to able to be profitable again.

Figure 1. Number of Tourist Arrivals in Egypt (2009-2018).
Source: The Central Agency for public mobilization and statistics, CAPMAS (2019)
The tourist arrivals after a short relief in 2012 dropped again to 9,464,000 tourists as a result of the 30th of June 2013 Egyptian revolution.
Barely picking up in 2014 the tourism industry was further hit by the tragedy of the Russian Metrojet plane crash terrorist act over Sinai on the 31st of October 2015. The tourist arrivals dropped to 5,399,000 tourists in 2016 from 9,328,000 tourists in 2015.
At the end of 2016, the introduction of the Egyptian government economic reform promoted tourism in Egypt, tourism flourished, and tourist arrivals grew to reach 11,347,000 tourists in 2018.
ARAB SPRING IMPACT ON EGYPT AIR PERFORMANCE
Egypt Air was founded in May 1932. A state-owned airline acting as the national carrier of Egypt, transformed in July 2002 into a holding company and nine subsidiaries.
Egypt Air group consolidated revenue dropped to 12,890 billion EGP in the FY 10/11 less 4.5% from 13,504 billion EGP in FY 09/10. The group consolidated cost increased to 14,945 billion EGP more 15% than the cost of 12,971 billion EGP in financial year (FY) 09/10. The net result for the group was a total loss of 2,059 billion EGP in the FY 10/11, which is a sharp drop from a profit of 533,122 million EGP in FY 9/10 (Egypt Air, 2011).
As a result of the political upheaval the chairman and CEO of Egypt Air Holding Company announced that the Group is ready to lease up to 25% of Egypt Air fleet (CAPA, 2011).
The situation during the events of the political upheaval was marked by labor disruption and industrial demands from labor unions. Eminent strikes were always around the corner, with continuous interference from unions into management decisions. Egypt Air airlines alone lost 2,204 billion EGP in FY 10/11(Egypt Air, 2011).
From Figure 2, Egypt Air Airlines key performance indicators are illustrated from FY 2009/2010 to FY 2017/2018.  There were three major events in the period from FY 2009/2010 to FY 2017/2018 that affected Egypt Air performance. 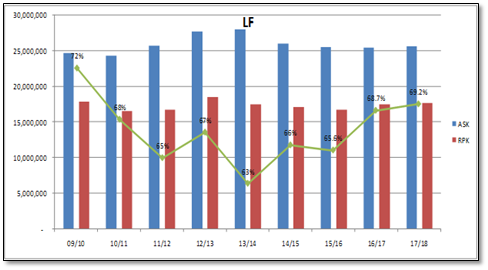 Egypt Air Airlines implemented network adjustments expanding in Africa, Europe and the Middle East with new destinations in Asia. Transit traffic at Cairo hub increased from only about 3% before the political turmoil to reach 17% in FY 12/13 then to further increase to reach nearly 30 to 35% out of Egypt Air total traffic in FY 13/14 (CAPA, 2014).

The increase in transit traffic pressured the yield down through heavy discounting as the cumulative losses have reached almost USD 1.5 billion since the political upheaval (CAPA, 2014).

From Figure 3, Egypt Air Airlines net results are illustrated for the period from FY 09/10 to FY 17/18. As a result of the 25th  of January 2011 Arab spring and the political unrest that was accompanied  with it, the demand to travel to Egypt diminished especially Cairo airport which is Egypt Air Airlines dedicated hub.

Egypt Air Airlines suffered from continues losses that started from FY10/11 with a loss of 2,204 billion EGP to totally reach accumulated losses of 20 billion EGP in FY 17/18. The losses in FY 16/17 reached alone 5,553 billion EGP as a result of low yield, low load factor and the foreign exchange currency rate losses due to the introduction of the Egyptian government economic reform measures by end of 2016.

An in-depth interview was carried out with 10 executives of Egypt Air to understand the environment that surrounded the strategic turnaround decisions and the objectives that were meant to be achieved.

The new executive team at Egypt Air holding company announced at the beginning of 2014 capacity cuts as part of a new strategic turnaround plan. The slim network strategy announced by the CEO includes frequency cuts on some European, Asian and Middle Eastern routes. Unprofitable routes such as Jakarta and Kuala Lumpur that are heavily dependent on transit passengers with low yields were suspended (CAPA, 2014).

The introduction of the slim network strategy with a modest capacity reduction of 8.5% did not stop the continuous losses of Egypt Air. A consultant was appointed in December 2014 to develop a project for further strategic decisions for turnaround.

The transformation plans covered work streams in commercial and operations areas in order to achieve growth, improve products and services, develop an effective organization and achieve Profitability to fund the future (El Hefny, 2019).

The strategic turnaround decisions were as follows:

There was a change of leadership by the end of 2015. The new Egypt Air holding company CEO announced that Egypt air would be implementing a new major restructuring plan. The plan core elements include network and fleet development with a cost reduction plan (Egypt Air, 2016).

By mid-2018 there was another leadership change with the appointment of a new CEO at the head of Egypt Air holding company who announced the hire of another consultant to assist with a new strategic turnaround plan and its implementation phase. The aim of this new strategic turnaround plan was to improve the performance of the group subsidiaries and their inter relations to increase efficiency by relocating certain activities and processes within the group (Rivers, 2019).

The new turnaround restructure plan improved the group performance, the consolidated group result losses decreased to just 1,915 billion EGP for FY 17/18 from a heavy loss of 5,553 billion EGP in FY 16/17.

1. Raising capital to fund future transformation and product upgrade. This challenge would be more pronounced with the Egyptian government comprehensive economic program that includes an initial public offering (IPO) for state owned companies in all their forms and legal nature. The economic program aimed to raise additional funds and lure more investments and to optimize the state’s assets.

Egypt Air was subject to heavy losses due to the 25th of January 2011 Arab spring political instability. As a result of reduced demand to travel to/from Egypt, Egypt Air tried to increase its load factor by promoting connecting travel through Cairo hub. The increase of frequency and new destinations supported with heavy discounting failed to increase the load factor, the result was continuous heavy losses.