Case Report
Transcend the Symptomatic Surface: Wernicke’s Encephalopathy
Wernicke’s encephalopathy (WE) can occur in up to 2.4% of the population. WE usually present a classic triad of ophthalmoparesis with nystagmus, gait ataxia, and confusion. Common risk factors for WE include malnutrition and substantial alcohol usage. In this report, we present a case of a young healthy male with an atypical presentation of WE.

The patient is a 37-year-old, previously healthy and non-cachectic, male with an unclear chronic psychiatric disorder that was brought to the emergency department for altered mental status.
He had no history of alcohol use or malabsorption, and had a BMI of 23.4 kg/m2. The CT of his head was negative for acute stroke. Moreover, the workup was significant for dehydration with ketonuria, which had a non-anion gap metabolic acidosis, hypernatremia, acute renal injury, and urinary retention. The patient was altered and unable to provide history, and his family was unreachable despite multiple attempts. Then, D5-NS was given to the patient for hydration. On day two, a neurology consultant noted that the patient had ophthalmoplegia with disconjugate, right eye abduction palsy. In addition, the patient had sustained direction-changing vertical and horizontal nystagmus. The MRI of the brain was consistent with WE. It turned out the patient intentionally lost 50 lb in the past 5 months. After administering thiamine via IV, the patient’s condition improved and he was later discharged to a skilled nursing facility for acute rehabilitation.
In the absence of the classic triad or history of malnutrition or alcoholism, WE is typically not high on the differential for a patient that presents with altered mental status in the emergency department. Giving dextrose to such a patient without prior thiamine administration may cause irreparable harm to the patient. Given thiamine’s ubiquitous availability, negligible cost, and low risk of toxicity, we recommend providing thiamine empirically for any and all patients presented to the emergency department with altered mental status prior to administration of any dextrose.
Keywords:  Hypernatremia, Nystagmus, Rehabilitation, Ophthalmoplegia
INTRODUCTION

Wernicke’s encephalopathy is an increasingly prevalent acute neurological disorder, involving both the central and peripheral nervous systems, that can become permanently degenerative and life-threatening if not treated promptly and appropriately [1]. Induced by a thiamine, or vitamin B1, deficiency, Wernicke's encephalopathy is typically distinguished by a triad of extra ocular symptoms including involuntary rapid eye movement and impaired coordination, as well as confusion [1,2]. However, the presence of the classical triad of symptoms upon initial examination of patients is only found in 16 to 33% of cases [3]. Unclear criteria on the range of symptoms a physician should look for upon examination and clinical complexity generate diagnostic challenges, with around 80% of patients going undiagnosed and untreated [4].
Moreover, the majority of patients are diagnosed postmortem [4]. In addition to being associated with the classical triad of symptoms, Wernicke’s encephalopathy is usually only expected among patients suffering from alcoholism, which only accounts for 50% of cases [3]. Wernicke’s encephalopathy can also occur as a complication in patients who have undergone bariatric surgery, gastrointestinal surgery, cancer, and pancreatitis [5,6]. Furthermore, Wernicke’s encephalopathy among patients with diets that inhibit thiamine uptake including foods such as tea, coffee, raw fish, and shellfish [7]. Overall, Wernicke's occurs among an estimated 0.2 to 2.8% within the population; however, the under diagnosis of this disorder suggests that it is even more prevalent [8].

The customary theme among all Wernicke's encephalopathy cases is a lack of thiamine. Thiamine, also known as vitamin B1, is a coenzyme that catalyzes the generation of energy in glycolytic and citric acid cycles, also known as the Krebs cycle, as well as in pentose phosphate pathways. In this way, deficiencies in thiamine-dependent enzymes such as Alpha-keto-glutarate, acetate, citrate, and acetylcholine, as well as increased levels of lactate and pyruvate arise from inadequate thiamine [1]. As a result, thiamine deficiencies can cause metabolic disparities that directly affect the nervous system, particularly the thalamus and hypothalamus of the brain [1,2].

A 37-year-old male with a history of an unclear chronic psychiatric disorder was brought to the emergency department (ED) by emergency medical service (EMS) for possible confusion. He has been on aripiprazole (ability) 5mg daily for 2 years, which he recently stopped using for unknown reasons. Family members reported to EMS that he has not left his room for a few days and apparently has not been eating or drinking. He was alert and oriented to person and place, but not to time, had no known injury and denied a history of alcohol use. He also did not have a history of bariatric surgery or gastrointestinal (GI) absorption dysfunction. Upon admission, his body mass index (BMI) was 23.4 kg/m2, and the physical exam showed intact extra ocular movements and no ophthalmoplegia was present. Gait was not assessed. Patient did not appear cachectic per admission physician and the rounding physician. Admission doctor attempted to reach out to the patient's family three times, but with no answer. Acute stroke was ruled out with a negative computed tomography (CT) of the head. He was hypernatremic with acute renal injury, ketonuria (no anion gap acidosis), and was given dextrose 5 percent in normal saline (D5-NS) intravenous fluid for hydration. Psychiatry was consulted and recommended restarting Ability. Hospital based service (HBS) was asked to admit for altered mental status (AMS) due to missed Ability. He also had leukocytosis with lactic acidosis.

Computed tomography (CT) head imaging showed no acute intracranial abnormality, but CT abdomen showed markedly distended urinary bladder (may be due to outlet obstruction or neurogenic cause, mild bilateral hydroureteronephrosis). The patient had acute renal injury with urine retention, for which foley catheter was placed and appropriate treatment was rendered after consulting urology. Chest X-ray, urinalysis and blood cultures were drawn, but were unremarkable except for ketone in urine, which is attributed to poor oral intake, and low C-reactive protein (CRP).

Neurology was consulted on hospital day 2 for altered mental status and was able to reach the patient's father for more information. Over the past 5 months, the patient underwent 50-60 lbs weight loss. 5 months ago, he mentioned that he was “fat” and desired to lose weight. Father thought he was eating very little or nothing. Because of the family’s work schedule, they did not eat together but thought he was taking food into his room to eat. No one had been observing him eat. Physical exam showed disconjugate, right eye abduction palsy and sustained direction changing vertical and horizontal nystagmus (upward on up gaze, leftward on left gaze, rightward on right gaze) (Figure 1). Magnetic resonance imaging (MRI) presented a finding of hyper intense signal consistent with Wernicke’s encephalopathy (Figure 2). Patient was given thiamine intravenously (IV) with improved condition and eventually discharged to a skilled nursing facility (SNF) for physical rehabilitation. 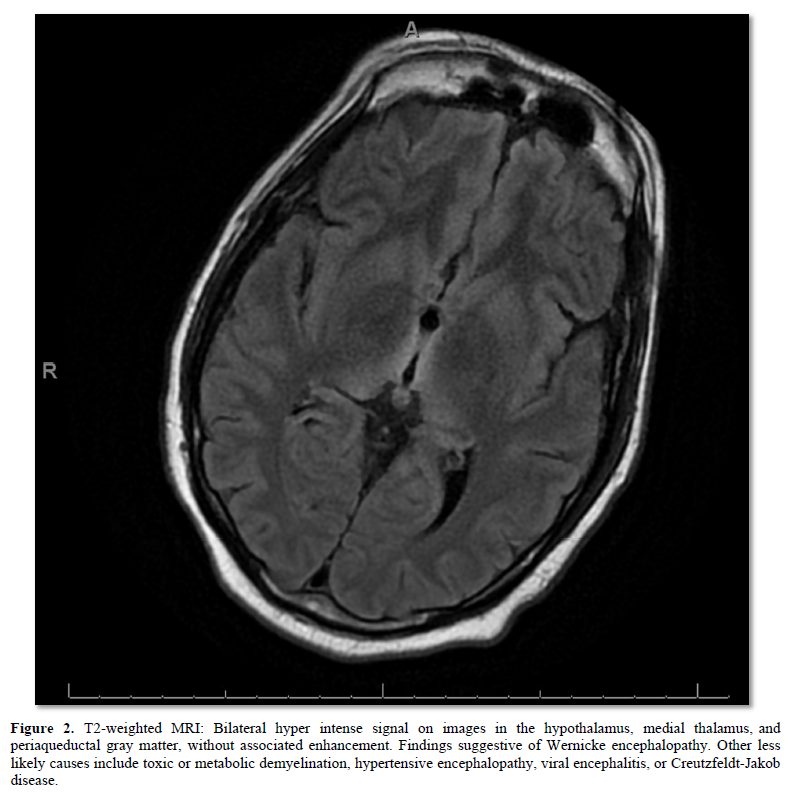 WE is not an uncommon disease and often characterized with the classic clinical trial of ophlamoparesis with nystagmus, gait ataxia and confusion. As mentioned earlier, it commonly affects those who have thiamine deficiency due to chronic alcoholism, or other causes such as malnourishment, liver disease and severe anorexia nervosa [1]. WE can also occur in patients with bariatric surgery [5]. Interestingly, alcoholism accounts for only 50 percent of all reported WE [3]. In addition, a study shows that the average age for nonalcoholic WE were 50.38 years old [8].

This case, however, had an unusual presentation in that the patient was young, had normal BMI, denied drinking alcohol, did not present as malnourished nor anorexic, initially had normal oculomotor function, and had many other findings that were not related to WE (it was rather a sepsis like presentation). Furthermore, the patient's history was initially difficult to obtain as family members could not be reached after repeated attempts and he himself was altered. In the absence of classic triad of oculomotor dysfunction, gait ataxia, and confusion, and also without a history of alcohol use or malnutrition, diagnosis of WE or suspicion of thiamine deficiency in hospitalized patients with AMS can be difficult. Two days later, the provider was finally able to reach his family member and discover his history of 50~60lb weight loss from five month of dieting, in addition to the physical finding of nystagmus.

The differential diagnosis of altered mental status is broad, including stroke, seizure, infection, drug-induced, trauma, concussion, cancer, electrolyte imbalance, cerebral hemorrhage, depression, and auto-immune [4,9,10]. While WE are part of the differential in patients with AMS, given the absence of risk factors such as history of alcoholism, bariatric surgery, and mal-nutrition, it is not high on the differential.

The current standard of care for the treatment of WE and anyone with suspected thiamine deficiency is to give 100 mg of thiamine IV prior to administering IV glucose [11]. Giving IV glucose without thiamine increases the risk of worsening symptoms, developing Wernicke-Korsakoff Syndrome, cerebellar degeneration and cardiovascular dysfunction [11]. For this patient, however, neither Wernicke’s nor thiamine deficiency was initially suspected due to its atypical presentation for either diagnosis. Only after treating the patient on day of admission with IV glucose(in the form of D5-NS) was his history made clear two days later for suspected thiamine deficiency due to significant dieting and lack of nutritional intake. Some could perhaps make a claim that the glucose IV treatment before thiamine could have induced his symptoms. It should be noted that dextrose was not given to this patient until stroke was ruled out, because maintaining elevated serum glucose level in stroke patients by providing intravenous dextrose is associated with adverse outcome [12,13].

There are many differential diagnoses for AMS. Some common ones are drug induced delirium, dehydration, alcohol intoxication, infections such as viral and bacterial meningitis, cancer with metastasis to the brain, stroke, and autoimmune disease such as lupus [14]. In 2022, although not prevalent, we should also consider COVID-19 as a possible cause for altered mental status due to thrombotic stroke [15]. WE may not be obvious to be placed on the list of differential diagnosis without its classical triad of symptoms or a history of malnutrition, but treating patients empirically with thiamine will benefit patients such as this one. An empiric 100 mg thiamine dose is unlikely to reach toxic level [16]. In addition, the cost of intravenous is negligible, around $3 per treatment dose [17]. Therefore, the take home message is: consider giving thiamine empirically to patients with AMS without a stroke diagnosis before administering fluids containing dextrose.

WE was not considered high on the differential as a probable diagnosis, however the severity of a missed WE diagnosis outweighs the probability, given the relatively low cost of treatment.

This case presents aggravated symptoms likely as a result of undiagnosed WE. This WE were challenging to diagnose due to an incomplete patient history at time of presentation, in addition to relative uncachetic appearance on physical exam. Understanding that (1) patient histories are often incomplete, thus WE may not be obvious, (2) given decrease oral intake and dehydration, providing patient with D5-NS is reasonable to maintain serum glucose in addition to rehydration, yet it may unfortunately aggravate the undiagnosed WE pathology, (3) untreated WE can lead to severe and chronic brain damage, (4) AMS is the most common presentation for WE; it is therefore, highly advised that thiamine should be administered before dextrose in all AMS cases that do not definitively rule out WE.