Research Article
Mucin Expression Patterns of Human Colorectal Adenocarcinoma
Mucins are high-molecular weight epithelial glycoproteins with a high content of clustered oligosaccharides. We examined mucin expression including MUC1, MUC2, MUC5AC, HGM, and MUC6, as well as CD10 expression in human colorectal adenocarcinoma, and analyzed their clinicopathological significance. Immunohistochemically, colorectal cancer cases frequently expressed mucins and CD10 as follows: MUC1 in 58.8% (57/97), MUC2 in 56.7% (55/97), CD10 in 40.2% (39/97), MUC5AC in 15.5% (15/97), HGM in 19.6% (19/97) and MUC6 in 2.1% (2/97). Lymph node metastasis was frequently detected in MUC1-positive colorectal cancers, while lymphatic and/or venous invasions were frequently found in MUC5AC-negative and HGM-negative colorectal cancers. There were no apparent statistical correlations between clinicopathological features and expression of MUC2, MUC6 and CD10. Expression patterns of MUC1, MUC5AC and HGM are thought to become indicators of lymph node metastasis and lymphatic/venous invasions.

Mucins are high-molecular weight epithelial glycoproteins with a high content of clustered oligosaccharides O-glycosidically linked to tandem repeat peptides rich in threonine, serine, and proline [1]. There are two structurally and functionally distinct classes, i.e., secreted gel-forming mucins (MUC2, MUC5AC, MUC5B and MUC6) and transmembrane mucins MUC1 is a membrane-associated glycoprotein with a molecular weight of 290 kD [2]. Previous studies have demonstrated that MUC1 antigen is expressed in tumors of various human organs, and it has been shown to be an indicator of clinicopathological significance of carcinomas, such as breast, ovarian and renal cancers because it may inhibit cell-to-cell adhesion, leading to tumor metastasis [3-8]. On the other hand, the secreted gel-forming mucins (MUC2, MUC5AC, MUC5B and MUC6) are found in the gastrointestinal mucosal epithelia. The mucin expressions become immunohistochemical markers for cell differentiation, e.g., MUC2 for intestinal goblet cells, and human gastric mucin (HGM) for gastric foveolar/surface epithelium [9,10]. Recently, expression of secreted gel-forming mucins, such as MUC2 expression, has been reported as indicators of clinical significance in gastrointestinal malignancies.
Colorectal cancer is not only one of the most common cancers, but also one of the leading causes of cancer death in the Unites States, as well as Japan [11,12]. When it is discovered in its early stages, colon cancer is treated with surgery and often cured. However, many patients with colon cancer have no remarkable symptoms until the disease reaches an advanced stage, such as metastasizing to other organs. Recent advances in molecular biology have clarified multi-step carcinogenesis of the colorectal cancer, i.e., adenoma-carcinoma sequence [13-15]. On the other hand, mucin expression phenotypes of colorectal cancer have not yet been established.

In this study, we examined mucin expression including MUC1, MUC2, MUC5AC, MUC6, HGM, as well as CD10 expression in human colorectal adenocarcinoma, and will discuss their clinicopathological significance.

Tissue samples were obtained from 95 patients with 97 colorectal cancer lesions (61 men and 34 women; mean age 67.1 ranging 41-88). The cases were surgically resected at Hirosaki University Hospital. Stages of colorectal cancer were classified according to the TNM classification [16].

Immunohistochemical staining
Immunohistochemical staining was performed using streptavidin biotin-peroxidase method with SAB-PO (M) kit (Nichirei, Tokyo, Japan). As primary antibodies, the following mouse monoclonal antibodies were used: MUC1 (Ma695, Novocastra Laboratories Ltd., Norwell, MA), MUC2 (Ccp58, Novocastra), MUC5AC (CLH2, Novocastra), MUC6 (CLH5, Novocastra), HGM (45M1, Novocastra) and CD10 (56C6, Nichirei).  D2-40 (Dako Japan, Kyoto, Japan) immunostaining was also performed for evaluation of lymphatic invasion. Deparaffinized and dehydrated sections were pretreated with microwave heating at 98 degree C for 20 min for antigen activation. The sections were immersed in 0.3% hydrogen peroxide (H2O2) in methanol for 30 min to abolish endogenous peroxidase activities. Nonspecific bindings were abolished with diluted rabbit serum. Next, the sections were overlaid with primary monoclonal antibodies diluted with phosphate-buffered saline (PBS). The dilution magnification was set as follows: MUC1, MUC2, MUC5AC, MUC6 and D2-40 were diluted to 1:100; and HGM was diluted to 1:50. CD10 was already diluted for use. And these sections left over night at 4°C in a moist chamber. After being washed with PBS, the secondary biotinylated anti-mouse antibodies were applied for 20 min at room temperature. Then washed with PBS, the sections were treated with peroxidase-conjugated avidin for 20 min. The reaction products were visualized using diaminobenzidine tetrahydrochloride (DAB) action for 20-30 sec. Counter staining was performed using hematoxylin.

Evaluation of immunohistochemical staining
Maximum part of an excision in a colonic adenoma was evaluated as a representative section. As an evaluation of immunohistochemical staining, the ratio of the staining positive cells was measured with the light microscope. The section that presented mucin expression in the epithelial cells of 10% or more was judged as a positive case. These results were examined in statistics about the following parameter: histopathological type, depth of cancer invasion, venous invasion, lymphatic invasion, lymph node metastasis, liver metastasis, distant metastasis, peritoneal dissemination and TNM classification.

Statistical analysis
The 2 (chi-square) test were used for comparisons between group frequencies.

DISCUSSION
We examined immunohistochemical expression of mucins, as well as CD10, in human colorectal adenocarcinomas and analyzed their clinicopathological significance. This study demonstrated the relationship between various mucin expression and metastatic potentials in colorectal cancer patients. Lymph node metastasis was frequently detected in MUC1-positive colorectal cancers, while lymphatic and/or venous invasions were frequently found in MUC5AC-negative and HGM-negative colorectal cancers. There were no apparent statistical correlations between clinicopathological features and expression of MUC2, MUC6 and CD10. 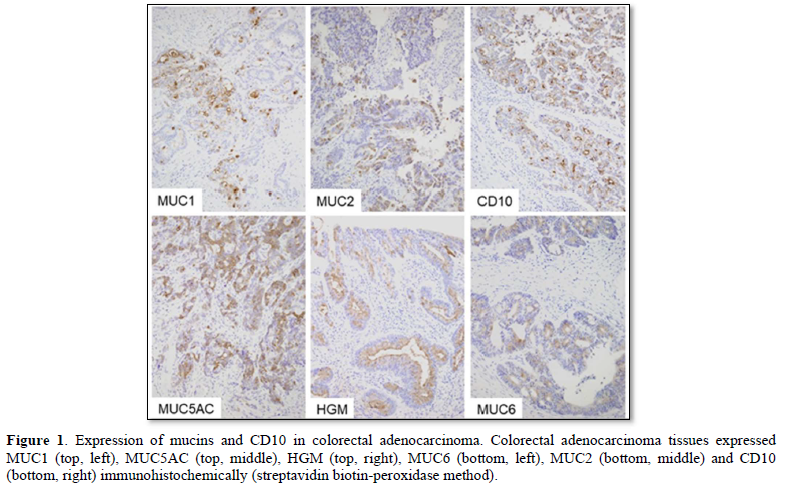 There are two structurally and functionally distinct classes, i.e., secreted gel-forming mucins (MUC2, MUC5AC, MUC5B and MUC6) and transmembrane mucins (MUC1, MUC3A, MUC3B, MUC4, MUC12 and MUC17), while some mucins (MUC7, MUC8, MUC9, MUC13, MUC15 and MUC16) do not categorized into either class. MUC1 has been shown to inhibit E-selectin-associated cell adhesion [19]. MUC1 includes cytokine receptor-like sequences in the extracellular region, and has been shown to function in signal transduction [20]. These observations suggested that MUC1 may function in tumor growth and metastasis of human carcinoma in vivo. Our present results demonstrated frequent lymph node metastasis in MUC1-positive cancer, and were supported by previous studies indicating that MUC1-mediated interactions may play important roles in tumor invasion [21-24]. More lymph node metastases in MUC1-positive cases suggested that MUC1-mediated mechanisms may cause carcinoma cells to reach lymph nodes through stromal lymphatic channels. On the other hand, the secreted gel-forming mucins (MUC2, MUC5AC, MUC5B and MUC6) are main mucin of normal gastrointestinal epithelia, and have been thought to play a role in the neoplastic progression and metastasis of gastrointestinal cancer [25-27]. HGM is the immunohistochemical marker for gastric foveolar/surface epithelium, and is encoded by MUC5AC core protein [28,29].
CD10 was originally used as a marker for common acute lymphoblastic leukemia antigen, but was shown to react with brush border of small intestine as well as germinal center of lymphoid follicles and microvilli of kidney [30-33]. According to the expression pattern of the aforementioned mucins (MUC2, MIC5AC, MUC6 and HGM), as well as CD10 expression, phenotypes of gastrointestinal epithelia are classified into the three groups; small intestinal type (CD10+, MUC2+, HGM/MUC5AC/MUC6+), large intestinal type (CD10-, MUC2+, HGM/MUC5AC/MUC6+), gastric type (CD10-, MUC2-, HGM/MUC5AC/MUC6+) and mixed type [(CD10+/-, MUC2+, HGM/MUC5AC/MUC6+) or (CD10-, MUC2+, HGM/MUC5AC/MUC6+)] [9,34]. Our present results demonstrated frequent lymphatic and/or venous invasions in MUC5AC-negative and HGM-negative colorectal cancers, i.e., intestinal type cancers, supported by previous studies [35]. Detailed mechanisms of vascular invasion in the MUC5AC/HGM-negative cancers have not yet clarified and should be analyzed in the future. However, no immunoreactivities of MUC5AC/HGM are thought to become an indicator of vascular invasion.

ACKNOWLEDGMENTS
This study was supported by JSPS KAKENHI, Grants-in-Aid from the Ministry of Education, Culture, Sports, Science and Technology of Japan.
CONFLICT OF INTEREST
The authors declare that they have no conflict of interest.