Research Article
Vedic Thought and Modern Genetics on Consanguinity
The word Gotra means "lineage" in the Sanskrit language. In Hindu society, the term Gotra (Sanskrit: गोत्र) means clan. It broadly refers to people who are descendants in an unbroken male line from a common male ancestor or patrilineal of Saptarishis (Seven Saints). This Gotra custom was established to avoid marriages between blood relatives. Marriages within the same Gotra ('sagotra') marriages are not permitted in the traditional matrimonial system. This custom was established to avoid marriages between blood relatives in the backdrop of more abnormalities in children born to sagotra couple. Modern genetics corroborate this view point in consanguinity. In this paper, the Vedic Thought and the Modern Genetics on Consanguinity is discussed.

In India science and religion are not opposed fundamentally, as they often seem to be in the West, but are parts of the same great search for truth and enlightenment that inspired the sages of Hinduism, Buddhism, and Jainism. Thus, in the Hindu scientific approach, understanding of external reality depends on also understanding the godhead. In all Hindu traditions, the Universe is said to precede not only humanity but also the gods.

The first step in abstraction requires a representation of a phenomenon through an equivalence in number. If two phenomena have the same number assigned to them, then they are related to one another. This is especially true in so far as man is a Microcosm of the Macrocosm, the Universe. This is particularly so of the visible link between Astromagnetism of Planets and their revolution periods, Asterisms, Signs together on one hand and the Chromosomes in Humans on the other. We shall now proceed to study the amazing equivalence in number of one phenomenon with the other.

In astronomy, Saptarishi Mandalam is known as ‘Ursa Major or Big Bear’. It is Bear because the seven stars of Saptarishi Mandalam with other neighbouring stars resemble a Bear. It is ‘Big’ because another cluster like and mirror image of it just above it is called ‘Ursa Minor’ or ‘Little Bear’ wherein Polaris is a star in line with Merak and Dubhe stars (Figure 1). At present, Bhrigu, Vasishta, Āngirasa, Atri, Pulasthya, Pulaha and Kratu are the Saptarishis (Figure 2) [2].

GOTHRA OF MALES AND FEMALES IN A FAMILY

The ‘Gothras’ go after the name of the Rishi and his progeny. For example, families belonging to the Bharadwāja Gotra are the followers of Bharadwāja Maharishi. People 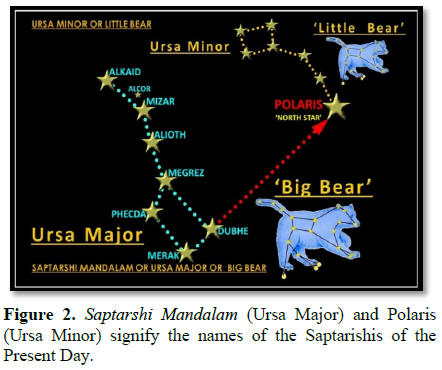 GOTHRA OF MALES AND FEMALES IN A FAMILY

The ‘Gothras’ go after the name of the Rishi and his progeny. For example, families belonging to the Bharadwāja Gotra are the followers of Bharadwāja Maharishi. People with same Gotra are considered to be siblings. The classification of Gotra came into existence in Vedic period. This Gotra custom was established to avoid marriages between blood relatives. Marriages within the same Gotra ('sagotra') marriages are not permitted in the traditional matrimonial system. This custom was established to avoid marriages between blood relatives in the backdrop of more abnormalities in children born to sagotra couple. Modern genetics corroborate this view point. If a bride is picked up from another Gotra, she will become a new member of the followers of Bharadwāja, gotra thereby increasing the number of the followers.

In a patrilineal Hindu society (most common), the bride belongs to her father's Gotra before the marriage, and to her husband's Gotra after the marriage. The groom on the other hand only belongs to his father's Gotra throughout his life. The Gotra of men remains the same, while the Gotra of the woman becomes the Gotra of their husband after marriage. In case a person has only daughters and no sons, his Gotra will end with him in that lineage because his daughters will belong to the Gotras of their husbands after their marriage. This was probably the reason why in the ancient vedic or Hindu societies preferred to have at least one Son to have the Gotra of the father continued. Boy and girl belonging to the same Gotra cannot marry under the Gotra system. A Bride and a Bridegroom belonging to the same Gotra are considered as siblings and hence are prohibited from marrying even if they belong to different families let alone within the family relatives since they belong to the same ancestor, it will be like a brother marrying a sister which is known to cause genetic disorders in their offspring. The Science behind the Gotra system in the prevention of marriages within the same Gotra plausibly relates to modern Genetics [3].

Vedic Thought in Selective Adaptation of the Zodiac, Celestial Bodies and Lunar Constellations in “Jyotish”

“Jyotish”, one of the six Vedangas and ancillary to the ageless four Vedas, in Sanskrit meaning the study of Astrophysics and Astrobiology read together. The selective adaptation of stars of the Universe besides certain celestial bodies of solar system in “Jyotish”, as means for its studies are based on the laws of Astrophysics. The subject of “Jyotish” has certain distinct principles laid down in its study whose genesis is purely centred on sunlight (electromagnetism) (YVS, 2017, 2019) [5]. Only 27 out of 88 lunar constellations, comprising a total of 243 stars, and lying equidistant along the ecliptic in the zodiac are adapted into the study of Jyotish being the source of all elements of inorganic chemistry forged in us. Put in a nut shell “We are made of star stuff” (William Shakespeare, The Tempest). Jennifer Johnson, an astronomer, concluded that “most atoms in our bodies were forged in stars” [6]. “The nitrogen in our DNA, the calcium in our teeth, the iron in our blood, the carbon in our apple pies were made in the interiors of collapsing stars. “The cosmos is within us. We are made of star-stuff. We are a way for the universe to know itself.” - Carl Sagan [7]. In evolution of all life on earth, this property is revealed.

Certain celestial bodies of solar system, namely, the Sun, Mercury, Venus, the Moon together with its two Nodes, Mars, Jupiter and Saturn are selectively adapted in Jyotish as means of its studies purely rests on the effects of electromagnetism in the form of sunlight (electromagnetic wave) to the Earth. Sunlight is essential for flora and fauna to flourish on earth. Earth receives sunlight from the solar system, directly from the sun, by reflection from the interior planets, by deflection and reflection from exterior planets and finally from the moon modulated due to waxing and waning. Without sunlight, whole life will be wiped out from the surface of the globe. Earth, as a constituent member of the solar system, is unique for evolution of life since the magneto sheath of the earth’s magnetosphere prevents harmful X-rays and UV rays from reaching the earth. The miracle of sunlight.

Absolutely, there is no difference in material between the living and the non-living. As matter is common in both living and non-living, we can define life as an emergent property of matter. We find force and energy in living whilst the same is dormant in non-living. It is through photosynthesis that light does its magical trick: the magic of transformation of matter -- carbon dioxide and water -- into life; the magic of transformation of light into living energy that transfers from plants to all animals. What matter was synthesized by the energy of light through photosynthesis is disintegrated through decomposition and recycles into nature into original form. No story of life can be completed without de-photosynthesis.  Thus, electromagnetic force, one of the four known forces of physics, is the criterion.

Sunlight is the electromagnetic wave of radiation characterized by frequency or wavelength of oscillations. Electromagnetic waves consist of two waves oscillating perpendicular to one another. One of the waves is an oscillating magnetic field; the other is an oscillating electric field with their wavelengths/frequencies and energy which interact with matter. “Magnetism is one of the fundamental properties of the Earth; it is native and fundamental to our planet’s existence”. Recently, an interest is paid to the bio-magnetism as a special scientific field dealing with the influence of the global Earth’s magnetic field on humans. So, it became a diagnostic tool and a therapeutically procedure for many diseases” [8]. All the 7 celestial bodies, 27 lunar constellations and the 12 signs of the Zodiac together sum up and signify the 46 chromosomes (23 pairs) in a human being including the 2 sex chromosomes signifying the gender of the person. In humans, males have XY chromosomes, females have XX but only one of these is active, meaning that both sexes “Jyotish” (Figure 3) [1].

Consanguinity is defined as “genetic relatedness between individuals descended from at least one common ancestor.” (1) In simple terms, consanguinity means two individuals are “blood relatives” or “biological relatives.” There are many cultures in which it is favored to marry a blood relative for various reasons chief of which are retaining property within the household where dowry system is prevalent and the other is for compatibility. It is a deeply rooted tradition in nearly in approximately 1/5 of the world’s population. most commonly in the Middle East, West Asia, and North Africa. Generally, there is increased risk for birth defects and genetic disorders in children of consanguineous marriages because of what are called “autosomal recessive” genetic disorders and other conditions related to a number of different factors between related people (i.e., multifactorial disorders).

The child inherits one copy of each of the genes from the mother, and one copy from the father. Some of the genes, both copies must function normally while other genes require only one functioning copy of a gene to function normally even when an abnormality in only one copy of the gene does not have any negative effects. In the males, if the “Y” - chromosome is affected, there is no pairing of the “Y” - chromosome to repair. In an autosomal recessive genetic disease, when both copies of a gene have a change, or “mutation,” then it affects the gene’s ability to behave normally. Blood relatives are likely to be silent carriers for the same recessive conditions, hence the risk of autosomal recessive genetic disorders is higher in children born from consanguineous unions. Autosomal recessive diseases vary widely and symptoms may include developmental delay, intellectual disability (mental retardation), muscle disorders, neurologic disease, blood disorders, multisystem disease, and many more [9].

RATIONALE OF SIGNIFICANCE OF VIEWING MIZAR, ALCOR AND POLARIS STARS BY THE NEWLY MARRIED COUPLE

In one of the rituals of a Hindu Marriage, the couple are asked to look up for Arundhati (Alcor) and Vasishta (Mizar), an ideal couple, in the Saptarishi Constellation. These twin stars are Binary stars and rotate in synchrony symbolizing conjugal love and affection and to tell that both husband and wife must do all things in synchronization.

The couple are also to look up for Dhruva, the Pole Star as it carries a greater significance of married life. This Saptarishi Constellation, comprising Arundhati and Vasishta, in Northern Hemisphere appears to rotate around the pole star ‘Dhruva’ or Polaris.

“Science without Religion is lame and Religion without Science is blind”.
– Albert Einstein
“Modern science is a manifestation of real religious spirit for it seeks to understand the truth by sincere effort”
– Swami Vivekananda

Science and religion are not opposed fundamentally as they are parts of the same great search for truth and enlightenment that inspired the sages of Hinduism. The ancient Hindus excelled in all subjects that afforded the largest field for abstraction and contemplation. The uncanny ability of the ancient Hindus to see the future is indisputable. Ancient Indian thought of Gotra system in Hindu marriages is scientifically validated.
Download PDF View PDF