Research Article
Profile of Children Presenting with Gangrenous Intussusception: A Tertiary Hospital Experience
Background: Intussusception is a common cause of intestinal obstruction in children. The aim of this study was to evaluate our experience in the management of children whose intussusception was found to be gangrenous at surgery.

Materials and Methods: This was a retrospective study of children below 15 years of age who had laparotomy for intussusception between January 2017 and December 2018 at a tertiary hospital in Enugu Nigeria.

Results: A total of 71 cases of intussusceptions were managed during the study period. Out of this number, 47 (66.2%) patients were noticed to have gangrenous intussusception at surgery and formed the basis for this report. There was male predominance and the peak age of the patients was 7 months. The mean duration of hospital stay was 10 days. About one-quarter of the patients had a history of preceding viral infection of the respiratory or gastrointestinal tract and all the intussusception were ileocolic. Right hemicolectomy with ileotransverse anastomosis and surgical site infection were the definitive operative procedure performed and most common post-operative complication respectively. Eight (17%) patients expired.

Conclusion: Late presentation of children with intussusception could result in bowel gangrene which is associated with significant morbidity and mortality. Early presentation is advised.

Intussusception is the invagination of a segment of the bowel (intussusceptum) into an adjacent segment (intussuscipiens). It is a common cause of intestinal obstruction in children less than 3 years of age [1]. In developed countries, the incidence of intussusception ranges from 0.24 to 2.4 per 1000 live births [2]. The peak age of occurrence of intussusception has been reported to be between 3 months and 9 months of age, with a male predominance [3]. Seasonal, geographic and demographic variations of intussusception also exist [4]. Intussusception may be classified into ileocolic (most common), ileoileal, ileoileo-colic and colocolic depending on the anatomical location. Etiologically, the cause of more than 90% of the intussusceptions in children is not known (idiopathic) [5]. Classically, abdominal pain, red currant jelly stool and palpable abdominal mass are the clinical features of intussusception. However, these features are present in only about 50% of the patients [6]. Abdominal ultrasound is the diagnostic imaging of choice for intussusception because of its high sensitivity and specificity [7]. Treatment of intussusception may be non-operative or operative. Non-operative treatment includes hydrostatic or pneumatic reduction while operative treatment entails laparotomy or laparoscopy. Intussusception requires prompt diagnosis and treatment. Late presentation of children with intussusception may lead to bowel ischemia resulting in gangrene, perforation and peritonitis [8]. For the purposes of this study, gangrene refers to localized death of intestinal tissue resulting from obstructed blood supply. The aim of this study was to evaluate our experience in the management of children whose intussusception were found to be gangrenous at surgery.

This was a retrospective study of children below 15 years of age who had laparotomy for intussusception between January 2017 and December 2018 at the pediatric surgery unit of Enugu State University Teaching Hospital (ESUTH) Enugu, Nigeria. ESUTH is a tertiary hospital located in Enugu, South East Nigeria. The hospital serves the whole of Enugu State, which according to the 2016 estimates of the National Population Commission and Nigerian National Bureau of Statistics, has a population of about 4 million people and a population density of 616.0/km2. The hospital also receives referrals from its neighboring states. Patients who had laparotomy for the same pathology at a peripheral hospital before referral to ESUTH for reoperation were excluded from this study. Patients who had hydrostatic reduction of intussusception and those with incomplete medical records were also excluded from the study. Ethical approval was obtained from the Research and Ethics committee of ESUTH and patients’ caregivers gave consent for the study. This study followed the principle of Declaration of Helsinki.

Recruitment into the study was based on clinical features and ultrasound confirmation of intussusception in children who presented during the study period. The procedure was explained to the parents and informed consent obtained. On presentation, the patients were resuscitated using intravenous fluids and antibiotics. A nasogastric tube and urethral catheter were passed to decompress the gastrointestinal tract and monitor urine output respectively. Blood samples were collected for hemogram and serum electrolytes. Blood was grouped and cross matched for surgery. Anemia and any electrolyte imbalance were corrected before surgery.

All the surgical procedures were performed under general anesthesia by a pediatric surgeon. Surgical access was through transverse supra-umbilical incision. The findings of gangrenous or perforated intussusception were made on examination of the bowel intra-operatively. All the patients had intestinal resection and anastomosis because of non-viable bowel.

Intravenous fluids, antibiotics and analgesics were administered to the patients. Oral intake was started when bowel function returned. Criteria for discharge were based on adequate wound healing and proper oral intake. The follow up period was for 12 months.

Information was extracted from the medical records, operation notes, operation register, and admission-discharge records. Data were collected in a proforma which included the age at presentation, gender, any preceding viral prodrome, duration of symptoms before presentation, findings at surgery, surgical procedure performed, post-operative complications, duration of hospital stay and outcome of treatment. Statistical Package for Social Science (SPSS) version 23, manufactured by IBM Cooperation Chicago Illonois, was used for data entry and analysis.  Data were expressed as percentage, mean and median.

A total of 71 cases of intussusceptions were managed during the study period. Out of this number, 47 (66.2%) patients had laparotomy for the treatment of the intussusception and formed the basis of this report. The remaining 24 (33.8%) patients were treated by hydrostatic reduction. Details of the demographics are shown in (Table 1). 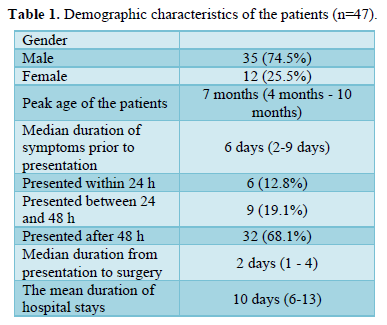 Right hemicolectomy with ileotransverse anastomosis was the definitive operative procedure performed in all the patients. Segmental bowel resection was not done.

Complications arising from the treatment of the patients are shown in (Table 2).

Outcome
Most of the patients recovered and were discharged home. Eight (17%) mortalities were recorded and resulted from overwhelming sepsis. Detailed are depicted in (Table 3).

DISCUSSION
Intussusception is a common pediatric abdominal surgical emergency and starts at a point in the intestine which is described as a lead point [9]. This lead point may be pathological or non-pathological. In children, this lead point is mostly non-pathological. The lead point initiates invagination and subsequent telescoping of the bowel into adjacent bowel segment. The blood vessels supplying the involved bowel are compressed resulting in bowel wall edema and venous engorgement. Progression of this process leads to compromised arterial supply and subsequent bowel gangrene and perforation [8]. Bowel gangrene is associated with shock and altered mental status.
Two thirds of our patients with intussusception were treated by laparotomy. One study from Zaria, Nigeria also reported the high rate of operative treatment of intussusception in developing countries [10]. However, non-operative treatment (hydrostatic or pneumatic reduction) by pressure reduction is the predominant modality of treatment of intussusception in developed countries [11]. The indications for operative treatment include features of peritonitis and failure of non-operative treatment. The high rates of operative treatment in our setting may be due to late presentation of the patients. More males were affected in the present study. This is consistent with the report of other studies [12,13]. Howbeit, other authors reported female predominance [14]. The reason for the gender disparity is unknown. The peak age group of our patients is similar to the reports of other researchers [15,16]. It is important to note that intussusception can occur at any age [8]. Delayed presentation of our patients is reflected in the 6 days lag period before presentation to the hospital. Late presentation of our patients may be due to poverty and lack of parental enlightenment. Paucity of funds and absence of well-established health insurance scheme may explain the long interval between presentation and treatment. The duration of hospitalization of our patient is comparable to the report of Singh [17]. The duration of hospital stays as low as 64 h has been reported [18]. The method of treatment rendered to the patients may determine the duration of stay. For instance, patients who underwent bowel resection stay longer in the hospital [19].
About one-quarter of our patients had a preceding history of gastrointestinal and respiratory tract infection prior to the onset of intussusception. Studies have shown an association between intussusception and viral infections such as rotavirus and enterovirus [20]. The effect of viral infections causing lymphoid hyperplasia (including Peyer’s patches) has been postulated as the mechanism underlying viral infection and intussusception [20].
All our patients had ileocolic intussusception. Ileocolic intussusception is the most common type of intussusception [8]. During the process of intussusception, the blood vessels of the intussusceptum are drawn inwards and compressed which may explain the higher incidence of gangrene in the intussusceptum, as recorded in the current study.
Right hemicolectomy with ileotransverse anastomosis was the surgical procedure performed in our patients. The scientific basis for this surgical procedure is based on the blood supply of the ileum and colon. Other authors also reported right hemicolectomy performed for gangrenous intussusception [21,22]. Segmental bowel resection with ileo-ileal anastomosis may also be performed in intussusception [23]. The length of bowel resected may depend on the extent of gangrene and part of the bowel involved in the intussusception.
Surgical site infection was the most common post-operative complication recorded in the index study. Other series on intussusception also reported surgical site infection as a common complication of laparotomy for intussusception [19,24]. In a background of gangrenous and perforated bowel, the surgical wound is considered a dirty wound and the risk of wound infection is high.
Despite the presence of gangrenous bowel, majority of our patients made a full recovery and were discharged home. Other studies also reported good outcome in the management outcome of their patients [19,24]. However, mortality may result from overwhelming sepsis similar to what we recorded in the present study.
CONCLUSION
Late presentation of children with intussusception could result in bowel gangrene which is associated with significant morbidity and mortality. Unlike in developed countries, bowel gangrene is still a common occurrence in children with intussusception in developing countries like Nigeria. Early presentation of children with intussusception is advised to avoid complications such as bowel gangrene, perforation and shock.
Download PDF View PDF