Research Article
A Bioinformatics Approach to Designing a Multi-Variant Vaccine Against Entamoeba histolytica
Entamoeba histolytica is the parasite that is responsible for amoebiasis and remains one of the very important best three parasitic causes of mortality worldwide. With increased travel and emigration to developed countries; such infection is becoming more common in non-endemic areas. Although the bulk of people infected with E. histolytica remains asymptomatic, some presents with amoebic colitis and disseminated disease. As more is learned about its pathogenesis and thus the host’s immune reaction, the potential for developing a vaccine holds promise. This narrative reported outline the present knowledge regarding E. histolytica insight within the development of a vaccine. During this study, immune informatics approach was used to design a completely unique epitope based oral vaccine against E. histolytica. This is due to the rise in resistance to antibiotics for the control, leading to an efficient vaccine as an alternative, which remains a challenge. Therefore, a rational, strategic, and efficient vaccine design against E. histolytica is important where the utilization of the foremost current bioinformatics tools like GEPTOP CELLO NCBI which some predictions results of which ADH2, PFP, PFKA, ITPK1, C4LUC7, HEXB, PPDK, O00851, FEN1, ADH1, PAP, CDK2, M7VYQ0, N9V912, M3S0V3 and M2R918 possessed a cytoplasmic location; LYS4and CPP2 were extracellular, whereas TBP1, and HEXA were predicted as outer-membrane proteins, none were inner-membrane and periplasmic. In this study, immune informatics approach was use to design a completely unique epitope based oral vaccine against E. histolytica. The vaccine designed fulfilled non-allergenicity, antigenicity, and appropriate solubility, relative molecular mass and isoelectric point.

Amoebiasis, or amoebic dysentery, could also be a term used to describe an infection caused by the protozoan Entamoeba histolytica [1]. Mostly infections were commonly known as asymptomatic, but invasive intestinal disease might occur manifested with several weeks of cramping, abdominal pain, watery or bloody diarrhea, and weight loss [1]. Disseminated, extra intestinal disease like liver abscess, pneumonia, purulent pericarditis, and also cerebral amoebiasis has been described [1]. Worldwide, it has been estimated that up to 50 million people are suffering from E. histolytica, primarily in developing countries, and it's liable for over 100,000 deaths a year [2]. Transmission generally occurs by the ingestion of infected water or food thanks to fecal excretion of cysts, and even fecal-oral transmission   within household and through male homosexual activity [1,3,4]. Vaccines were currently being investigated in rodent and a non-human primate model appears promising. Using both native and recombinant kinds of the amoebic Gal/GalNAc lectin has been presented for protection against intestinal and liver infections [5]. Investigated a vaccine in baboon models, a natural host for E. histolytica [6]. Cholera toxin B subunit was co administered with Gal-lectin which resulted in significant, moderate level of protection against E. histolytica reinjection. The vaccinated baboons displayed higher titers of intestinal anti-peptide IgA, intestinal anti-lectin IgA, and also serum anti-peptide IgG antibodies, followed up colonoscopy showed no sign of inflammatory colitis or amoebic invasion [6]. Targeting other components of E. histolytica, like serine-rich protein and thus the 29-kDa-   reductase antigen, has been shown successful against ALA in rodent models [5]. More rigorous testing for the event of a successful vaccine against E. histolytica is warranted. Apart from identifying target immunogenic proteins, the mixture of doses, adjuvants, and boosts must be optimized [7]. The responses in animal models, non-human primates especially [6], suggest that it's going to be possible to develop a viable human vaccine, advancing to urge beyond the preclinical stage. Sadly, however, the induction of LTM has not yet been presented in animal models, which is the hallmark of a successful vaccine.

The technological advances within the fields of genomics, proteomics, human immunology, and structural biology have provided the molecular information for the invention and prediction by bioinformatics tools of novel antigens, epitopes, and style of vaccines against pathogenic bacteria, like meningococcus B [8-10]. Bioinformatics tools can predict sequences with binding affinity to MHC alleles and epitopes of T and B cells [11]. The main target on vaccine design and development has changed to the assembly of peptides composed of multiple epitopes (multi epitope vaccines), supported linear arrangements, as a totally unique alternative. Additionally, epitope-based vaccines have demonstrated various advantages, including safety, the chance to rationally engineer the epitopes for increased potency, breadth, and antigenicity, and therefore the possibility to focus large repertories of immune responses on conserved epitope sequences [12]. This study was an in-silico attempt aimed toward designing a completely unique oral vaccine against E. histolytica was in silico designed.

Phylogenetic tree of the retrieved sequence of the capsid protein of E. histolytica was created using Mega X software. 20 of the protein trees were constructed using maximum likelihood parameter in the software [16].

To identify MHC-I binding epitopes, NetMHC 4.0 server was used [17]. Fifty-one human leukocyte antigen (HLA) alleles (HLA-A, -B, -C, and -E) and six murine alleles (H-2) were evaluated. Base on the MCH-I binding epitopes predictions were calculated for nine-mers epitopes with a threshold for strong binders of 0.5% and a threshold for weak binders of 2%.

Linear B cell epitopes of 20-mers were predicted utilizing ABCpred with a threshold of 0.7. The second was BCPred server which was applied with a specificity threshold of 75%. For BepiPred server, only amino acids with score >1.0 were considered for the downstream analysis [18].

They were selected based on the following criteria: (1) 20-mer epitopes, (2) epitopes matching on all algorithms, if possible, and (3) potential to bind with the maximum number of MHC-I and MHC-II alleles. Using Clustal Omega server for the selection of sequences that were aligned and overlapped.

Protein Prediction and Validation of Secondary and Tertiary Structures

The secondary structure of the multi-epitope antigen was predicted using PSIPREDv3.3 Protein Prediction and validation of secondary and tertiary structures [20]. The three-dimensional (3D) structure modeling was performed using Swiss-Model server. Jmol was used for visualizing 3D structures of proteins. For refinement of 3D model structure, Galaxy Refine and Galaxy Loop were applied [21].
The best model was validated by the ProSA web and ERRAT. The residue-by-residue stereochemical qualities of models were validated by Ramachandran plot obtained from PROCHECK server [22]. The best-refined model was selected.

It has been shown that the combination of a long list of antigens do increase the effectiveness of vaccines [23] evaluated a multi component vaccine in human volunteers; they observed that the vaccine was safe but highly immunogenic, inducing long-lasting humoral and cellular responses to the antigens. Twenty 20 proteins were selected for this vaccine candidate. These were further screened for the next step for further parameters, including subcellular localization, essentiality, virulence, non-human homology, TM helixes, and molecular weight. Our predictions showed that sixteen: ADH2, PFP, PFKA, ITPK1, C4LUC7, HEXB, PPDK, O00851, FEN1, ADH1, PAP, CDK2, M7VYQ0, N9V912, M3S0V3 and M2R918 possessed a cytoplasmic location; LYS4 and CPP2 were extracellular, whereas TBP1, and HEXA were predicted as outer-membrane proteins as shown in Table 1. Both surface and extracellular proteins are good targets to develop a vaccine aiming toward prevention of bacterial infections and diseases [24].

In the analysis of essential genes by using GepTop package, fifteen (15) out of the 20 selected proteins were predicted to have essential genes. ADH2, PFKA, ITPK1, C4LUC7, TBP1, HEXA CPP2, PPDK, O00851, FEN1, ADH1, LYS4, PAP, CDK2 and M2R918 were identified to have essential genes. Essential genes are those genes for an organism that are critical for its survival; essential genes are of particular importance because of their theoretical and practical applications such as studying the robustness of a biological system, defining a minimal genome/organism and identifying effective therapeutic targets in pathogens [14]. Homology analysis of the 20 prioritized proteins using BLASTp revealed <60% identity, which was significant and important to declare the sequences as nonhuman homologs; A good vaccine targets should not be human homologues so as to avoid autoimmunity. The prediction of the topology of proteins by TMHMM showed that none of them have helix. Finally, molecular weights calculated by Compute pI/Mw tool of 4 proteins resulted to weigh <60,161.14 kDa respectively, also 2 protein resulted to weight (Table1).

Good vaccine candidates are considered as those that do not have similarity with human proteins in order to avoid or prevent the generation of a potential autoimmune response; they must also lack TM regions, to facilitate their expression. Other features of a good vaccine potential are that it should possess good antigenic properties, which are vital for disease pathogenesis and for protection against the antigen [25]. Some authors have used these approaches in the selection of candidate proteins for thein silico design of E. coli vaccines [26].

T and B Cell Epitopes

The vaccine is composed of 400 amino acids, and prediction of secondary structure showed that it contains 67% a helixes, 15% ꞵ sheets, and 18% others (random coil and ꞵ-turn), as shown in Figure 3.

Five 3D models of protein vaccine were generated among which the model with the highest c-score = 5 was selected for further refinement; the c-score range is typically from 5-6, the higher the value, the higher the confidence.

The quality and potential errors in the best model were analyzed. The initial input model z-score was-9.94, which falls within those commonly observed in similar size-native proteins (Figure 4A). ProSA-web indicated that the preliminary model requires refinement processes. Hence, the raw model was subjected to loop refinement and energy minimization using galaxy refine. After all refinement procedures, ERRAT factor was improved from 96.8 to 97.9. The z-score of the final model reached a value of -10.11 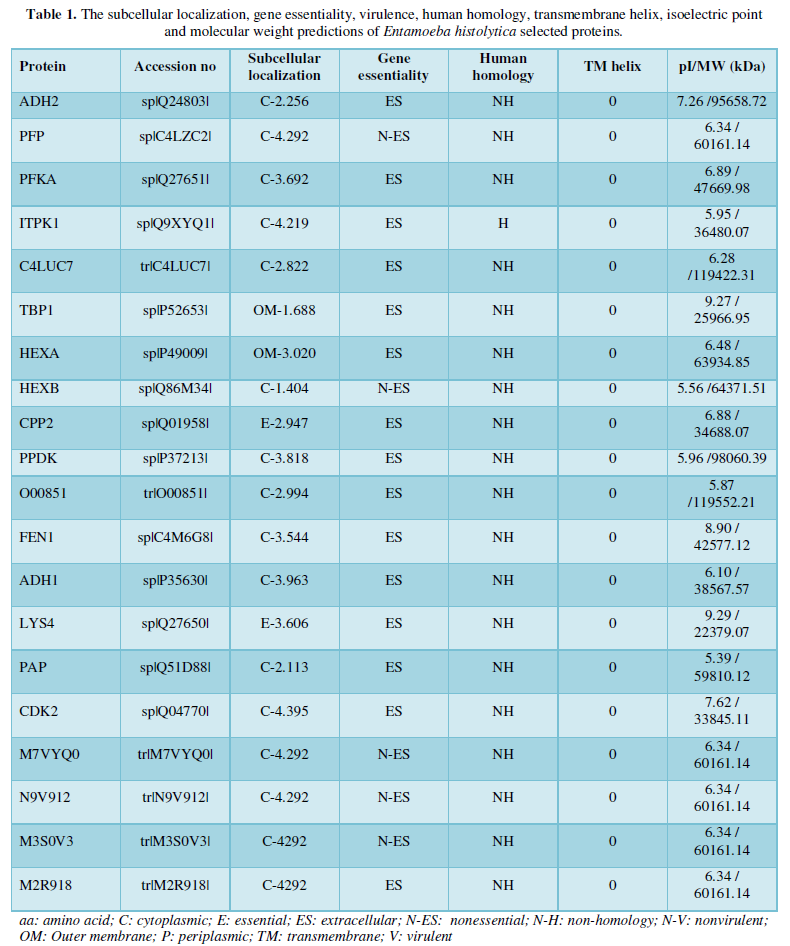 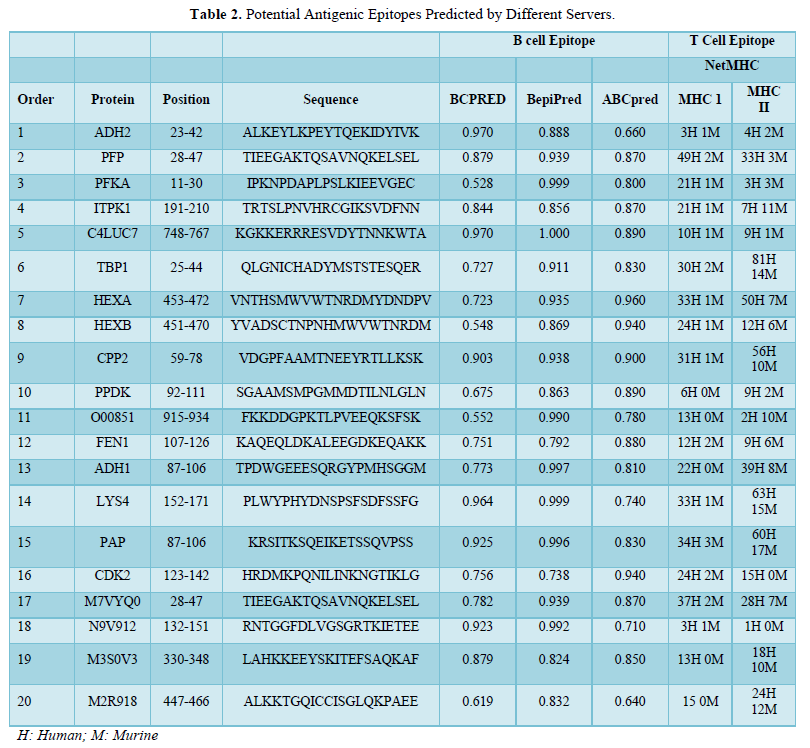 Antigenicity, Allergenicity, Solubility and Physicochemical Parameters of the Vaccine

An antigenicity score of 0.33722625 was obtained. The allergenicity prediction showed that the vaccine is allergenic. The molecular weight and theoretical pI of protein were 45189.22 kDa and 6.02, respectively. The final model was given (Figure 7). 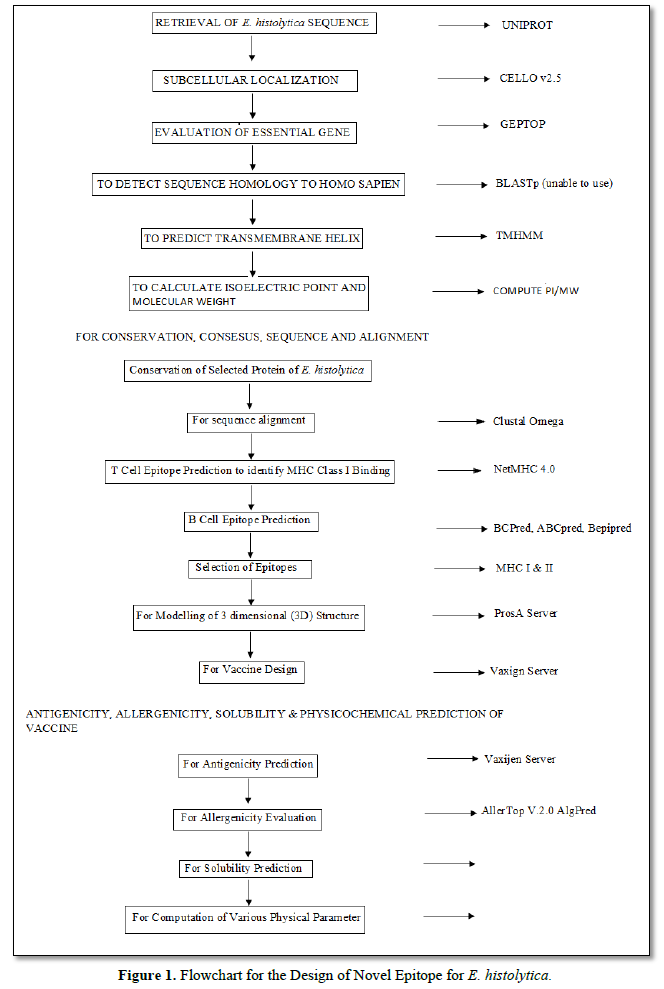 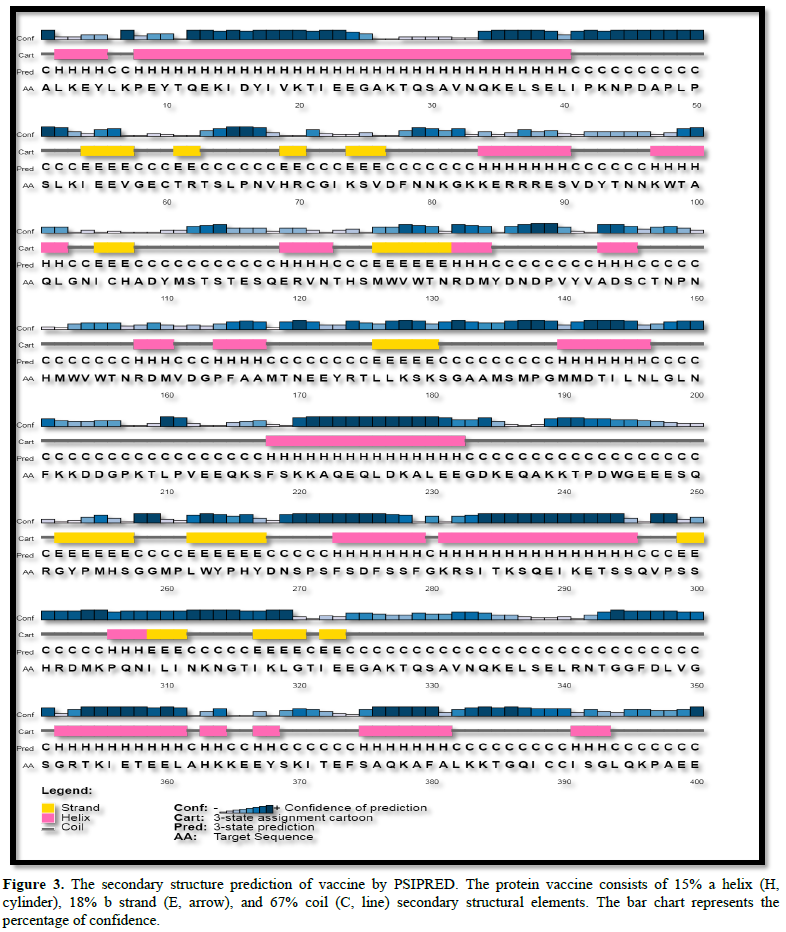 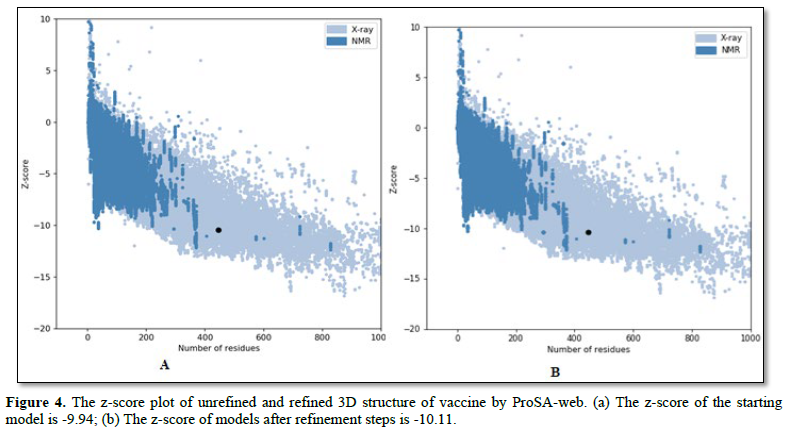 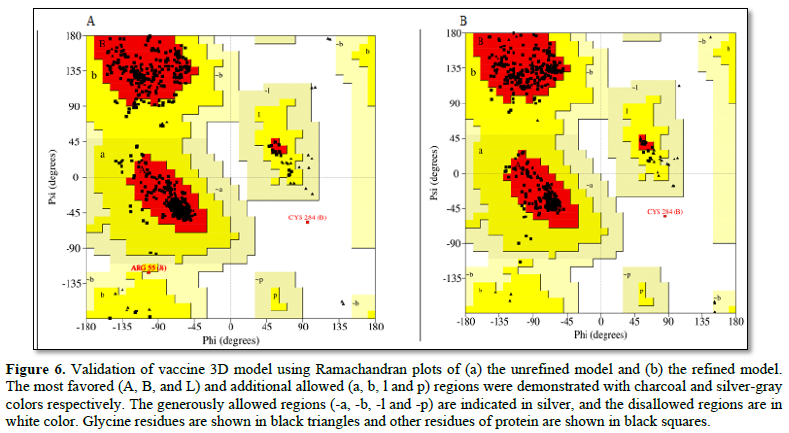