Malaria continues to rank as the number one parasitic scourge in the tropics accounting for over 50% of cases in hospitals. The ecology and diversity of the vectors play a vital role in the epidemiology of the disease. Identification of malaria vectors is essential in malaria mapping and modern protocols employ molecular techniques over morphometrics. The former being more definite and reliable in taxonomic studies. In this study, Anopheles and Culex species were identified using Polymerase Chain Reaction protocols. Mosquito larvae and pupae were collected via habitat evacuation from 33 breeding sites in 11 towns from Ifedore Local Government Area Ondo state, Nigeria. Mosquito larvae and pupae collected were reared to adulthood in the laboratory and identified morphologically to generic level using standard morphological keys. Morphologically identified Anopheles gambiae s.l. (340) Culex pipiens complex (150) were further subjected to Polymerase Chain Reaction protocol. Results showed that 148 (98.72%) of the Culex pipiens complex were identified as Culex pipiens quinquefasciatus while the Anopheles gambiae s.l. were identified as Anopheles gambiae s.s. (315), Anopheles arabiensis (21) and Anopheles merus (04). This study concludes that the residents of the area are at risk of mosquito-borne diseases, particularly falciparum malaria, whose vector was recorded in large numbers in the study area.

Over 3,500 species of the family Culicidae have already been described comprising 43 genera [1], these figures are subject to continual change, as more species are discovered, and as DNA studies give reasons for restructuring and rearrangement of the family taxonomy [2]. Members of the family culicinae and anophelinae most especially the culicines and anophelines act as vectors of diseases. Separation of species is complicated by their confusing flexibility and probable gene flow between them. Because morphologically identical mosquitoes are often found in sympatry with other members of the same complex over much of their geographical range, their relative roles in the transmission of pathogens such as malaria, arboviruses and filariasis [3] and the ecological conditions, which determine their distributions [4-8] are often difficult to evaluate. Taxonomic identification of mosquitoes has been largely based on adult characters such as mating incompatibility developed in 1964 [9] differences in chromosome morphology developed in 1967 [10] isoenzymes protocols of 1978 [11] and recently DNA characteristics. The need for accurate method of identifying mosquitoes, most especially vectors is reflected by the fact that the basic taxonomy of the best-known vectors has remained contentious and has necessitated reinterpretation of the biology of vectors such as Anopheles gambiae complex. Some of the taxonomic complexity within An. gambiae s.s. has been elucidated through the analysis of chromosome inversion [12,13] hydrocarbons [14] and increasingly by the use of molecular methods to identify species, chromosomal forms (i.e., specific karyotypes) and geographical variants [15,16]. Emphasis and efforts are being directed to the development and application of molecular tools and Enzyme Electrophoretic Variations for the specific identification of insect-borne disease vectors transmitted by members of a sibling species complex. Currently combination of keys for morphological identification [17-19] and molecular techniques based on polymerase chain reaction protocols derived from the modified procedure (protocol using Pre-mix) established by Scott and others [20] is now being used across the globe, in Nigeria a few research works has been done following this procedure [4,21-27]. However, in-depth understanding of the type’s mosquito is needed. Identification of these species molecularly is novel in the study area.

Ondo State is situated in the south western part of Nigeria with geographical coordinates of 7052ˈN, 6005ˈN and 5045ˈN, 4020ˈE. The state is bordered by Ekiti State in the north, Osun State by the west, Edo State at the eastern end, Ogun States State and the Atlantic Ocean in the southern area. Ifedore Local Government Area (5021ˈN, 5004ˈE) is one of the eighteen (18) Local Government Areas in the state and it is largely rural in nature with agrarian settlers (Figure 1). The Local Government is made up of eleven (11) towns and all were used for the study. 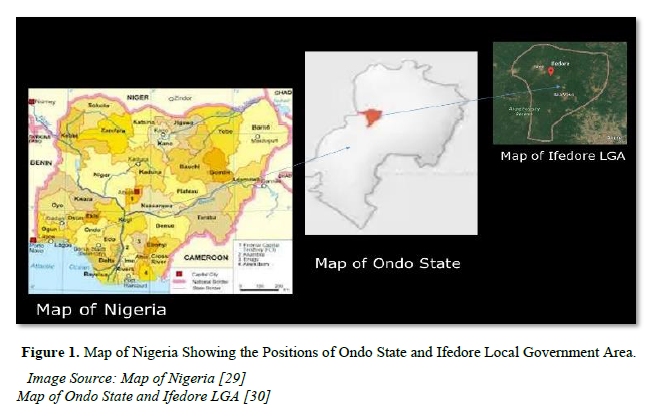 Immature stages of mosquitoes were collected using standard plastic dippers, collection containers (each specific for a site, such sites included abandoned tyres, puddles, plastic containers and concrete holes) and transported to the laboratory. The larvae were reared and fed, with specially made feed comprising of yeast and biscuit in combination ratio of 1:5, to adulthood. The emerging adults were preserved in 1.5ml Eppendorf tubes containing silica gel.

All specimens were identified morphologically using Standard keys by [12,13,14] and after which Anopheles and Culex species were transferred in properly labelled vials to the Molecular Entomology and Vector Control Research laboratory of the Nigerian Institute of Medical Research, Yaba, Lagos, for molecular identification. All the reared Anopheles (n=340) and 156 of the reared Culex species (n=1270) were selected from each locality for molecular identification. DNA extraction was conducted with the aid of a genomic DNA extraction kit prep GEMTM insect (ZyGEM Corporation Limited, New Zealand). DNA was also extracted from the positive controls (no reference, positive controls are established mosquito DNA samples in the laboratory of Nigeria Institute of Medical Research) 1µl of the DNA extract from each mosquito sample was used as template for the Polymerase Chain Reaction synthesis. For the sister species identification of Anopheles gambiae complex, a standard protocol was adopted [15]. Master mix solution containing 2.5µl of 10x PCR reaction buffer, 2.5µl of dNTP, 1µl of MgCL solution, 2µl each of the other primers (Universal, Anopheles gambiae s.s., Anopheles arabiensis, Anopheles merus/melas), 4.9µl of sterile distilled water and 0.2µl Taq polymerase enzyme.

PCR for the 150 randomly selected Culicines was performed with universal and species-specific primers for the Culex pipiens Complex. Molecular identification of all the species complex was based on the species-specific nucleotide sequences in the ribosomal DNA intergenic spacers (IGS) following the modified procedure (protocol using Pre-mix) established by Scott and others [15]. The amplified DNA were separated on a 1.50% agarose gel stained with ethidium bromide and viewed on Ultra-Violet (UV) trans illuminator. Agarose gel with Tris-Borate Ethylene Di-Amino Tetraacetic Acid (TBE) Buffer: mixed and boiled in microwave until solution was cleared. Mixed between 1min heating to ensure that it does not boil over and cooled for 5 min. The master mix solution containing 4.00µl Pre-mix, 5.25µl ddH20, 1.00µl BSA (X1), 0.50µl ACEpip1, 0.50µl ACEpip2, 0.50µl B1246s and 1.00µl DNA (Figure 2). 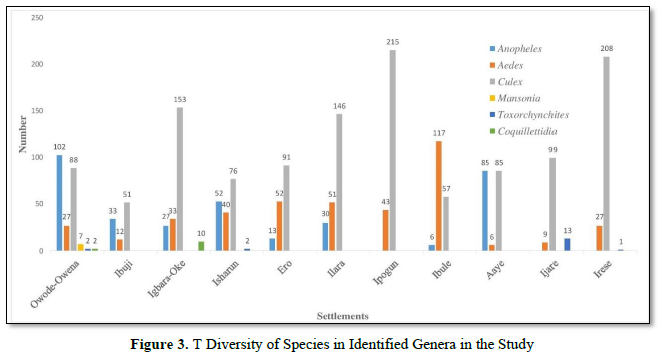 After the morphological identification of mosquitoes from the Local Government Area, 6 genera were identified with Culex with the highest number of individuals as observed previously [8] Owode-Owena, Aaye, Igbara-oke, Isharun, Ilara and Aaye were the localities with Anopheles while the remaining 5 localities had other species the findings here are consistent with initial reports [5-7] that An. gambiae and An. arabiensis are extensively distributed throughout most of tropical Africa. The distribution of the male and female of the species in the Local Government Area, showed that number of male mosquitoes were more than the females except for Coquillettidia and Mansonia species, this would increase the tendencies of mating by the females.

After selective molecular analyses, Culex pipiens quinquefasciatus was the only species of Culex pipiens complex encountered as also established by Yayocki and others [27]. Polymerase Chain Reaction protocols confirmed the presence of mosquitoes of importance to malaria transmission (Anopheles gambiae s.s., Anopheles arabiensis and Anopheles merus) and presence of Culex pipiens quinquefasciatus another vector of major public health importance. After PCR identification of the 340 Anopheles gambiae s.l., Anopheles arabiensis was 21, Anopheles gambiae s.s was 315 and Anopheles merus was 4. The record of Anopheles gambiae s.s. as the dominant species in this study corroborates literatures in parts of Nigeria and tropical regions that shares the same ecological characteristics as the study area [25,28]. An. merus was reported in low numbers in this research probably as result of the fresh nature of the water bodies. Due to cost of molecular analyses the other species were not subjected to analyses.

The occurrence of the mosquito species showed no significant difference across the villages except for Toxorhynchites species, which did not have wide distribution across localities. Toxorhynchites species whose larvae feeds on other mosquito larvae and can act as biological control agents were found in Owode-Owena, Ibuji, Isharun. The presence of the other species is very significant to public health in the study area, as they can act as vectors of various diseases ranging from Tularaemia, Arboviral diseases, such as yellow fever, Zika disease, dengue fever, and chikungunya, malaria and Lymphatic filariasis. Outbreak of these diseases in the area or neighboring local areas will have significant impact on the villagers, as the vectors are readily available.

The molecular work done in this research is novel in this locality, it will go a long way to help in controlling the species which are different in behavior, even to their sister species.

The Authors acknowledges Master Sunday Ogunleye and Mr. Timilehin Oluwateru who helped on the field, staffs of Entomological and Parasitological Laboratory of the Nigeria Institute of Medical Research.