Extrahepatic bile duct cancer represents one of the highly aggressive malignancy because of its frequent metastasis and recurrence. Lymphatic invasion/lymph node metastasis is thought to be one of the prognostic factors. We morphologically analyzed lymphatic invasion of the TFK-1 extrahepatic bile duct cancer cells, using 3D human stromal tissues with lymphatic vessels. The TFK-1 cells showed epithelial mesenchymal transition (EMT) at the start of stromal invasion. Light microscopy and transmission electron microscopy demonstrated that TFK-1 cells became spindle in shape, i.e., EMT at the intravasation and extravasation. The 3D human stromal tissues with lymphatic vessels are thought to become a useful model analyzing the lymphatic invasion mechanisms of extrahepatic bile duct cancer.

Biliary tract cancer, i.e., cancer of extrahepatic bile duct/gallbladder, is the most common malignancy of the biliary tract, and is recognized as one of the high-grade malignancies because of its frequent metastasis and recurrence [1-3]. Most patients with biliary tract cancer are usually treated at an advanced stage, and the prognosis remains poor despite the development of recent diagnostic methods. Biliary tract cancer frequently shows the lymphatic invasion leading to lymph node metastasis, but its morphological analyses have not yet been examined.

TFK-1 is a human cell line derived from extrahepatic bile duct carcinoma, obtained from the RIKEN BRC through the National Bio-Resource Project of MEXT, Japan [4]. The TFK-1 cells cultured in RPMI 1640 medium with 10% FBS and 1% penicillin-streptomycin.

3D human stromal tissue models with lymphatic vessels 1x106 of normal human dermal fibroblasts (NHDF) coated with fibronectin-gelatin (FN-G) nanofilms were seeded onto each 24-well trans-well insert and incubated for 24 h to form 4-layered NHDF tissues [5,6]. Then, one layered of FN-G nanofilms coated lymphatic endothelial cells (LECs) were then seeded to obtain 4-layered/one-layered tissues. Additionally, the same amount of NHDFs were accumulated on to form a sandwich. After 1-2 days, the 3D lymph-capillary models were constructed. To mimic the tumor invasion models, the TFK-1 cells were seeded on the tissue and cultured for 24, 48, 96, and 144 h.

The 3D tissues were routinely fixed with 10% solution of buffered formalin and embedded in paraffin. Four-μm-thick sections of the 3D tissues were stained with hematoxylin- eosin (H&E) (Figure 1A). Immunostaining of D2-40 were performed using Ventana Bench Mark GX slide staining system (Roche Diagnostics K.K., Tokyo, Japan). Lymphatic vessel formation in the tissue was confirmed with D2-40 immunostaining (Figure 1B). 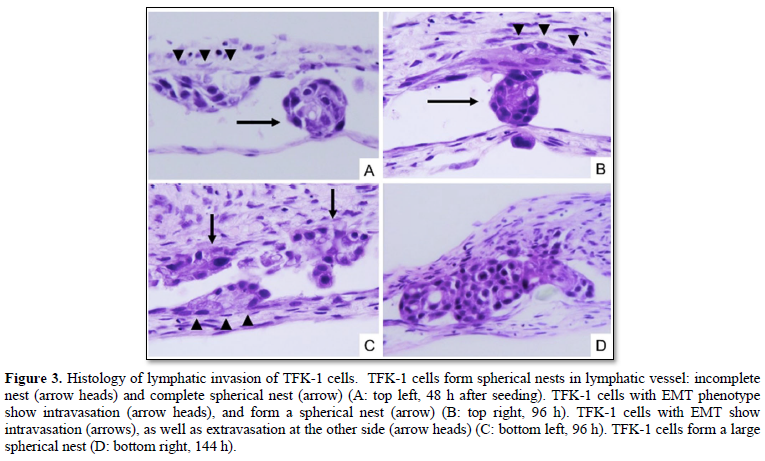 The most cases of extrahepatic bile duct cancer are epithelial tumors that originate from the bile ducts, and represent one of the highly aggressive malignancies [7-10]. In a recent study, the median disease-specific survival rate after surgery in patients with lymph node metastasis was lower than that of patients without lymph node metastasis [11]. It is an important issue to analyze the mechanisms of the lymphatic invasion leading to lymph node metastasis. However, molecular/histological mechanisms of lymphatic invasion have not yet clarified, while the metastatic cascade via blood vessel have been demonstrated recently.

Malignancy in cancers is characterized by invasion and metastasis that are closely associated with interaction between cancer cells and non-cancerous stroma [12,13]. Recent studies have demonstrated invasion-metastasis cascade such as invasion of basement membrane, passage through extracellular matrix, intravasation, vascular dissemination, extravasation, and formation of metastatic foci [14,15]. However, these sequential steps of the cascade are associated with blood vessels, but not lymphatic vessels. Mechanisms of lymphatic spread have not yet understood. Our study is the first to demonstrate histological/electron-microscopical findings of lymphatic invasion using human extrahepatic bile duct cancer cells.

EMT is an important process that occurs during the cancer progression. It is characterized by the loss of epithelial factors, including E-cadherin, claudins, and cytokeratin’s, and the upregulated expression of mesenchymal markers, including N-cadherin, vimentin and fibronectin. Cancer cells that have undergone EMT are thought to acquire a fibroblast-like motile and an invasive phenotype [16-19]. TFK-1 human bile duct cancer cells morphologically showed EMT at the start of stromal invasion. Moreover, TFK-1 cells significantly exhibited EMT at the lymphatic intravasation/extravasation, and formed spherical nests in the lymphatic vessels. These processes are extremely consistent with the invasion-metastasis cascade of blood vessel.

This study was supported by JSPS KAKENHI, Grants-in-Aid from the Ministry of Education, Culture, Sports, Science and Technology of Japan.

The authors declare that they have no conflict of interest.