Research Article
Prevalence and Associated Factors of Anemia among Lactating Women in Ethiopia from 2010 to 2020: A Systematic Review and Meta-Analysis

Anemia is one of the common public health problems that have still remained affecting populations across the world [1,2]. Children, pregnant women, and lactating mothers are vulnerable population groups highly affected by anemia in the world [3]. A systematic analysis of 257 population- representative data from 1995 to 2011 showed that anemia prevalence decreased from 33% to 29 % in non-pregnant women, from 43% to 38% in pregnant women, and from 47% to 43% in children [3]. However, the prevalence of anemia varied a cross regions and countries [3-5]. The highest rates of anemia among reproductive-age women were observed in Sub-Saharan Africa (48%) and South Asia (47%), while the lowest rate was found in high-income regions (16%) [3]. Moreover, according to a 2018 global nutrition report, anemia among childbearing women was slightly increased to 33% since 2012[6].

Anemia among lactating women is also a common nutritional problem throughout the world, especially in developing countries [7, 8]. The prevalence of anemia, 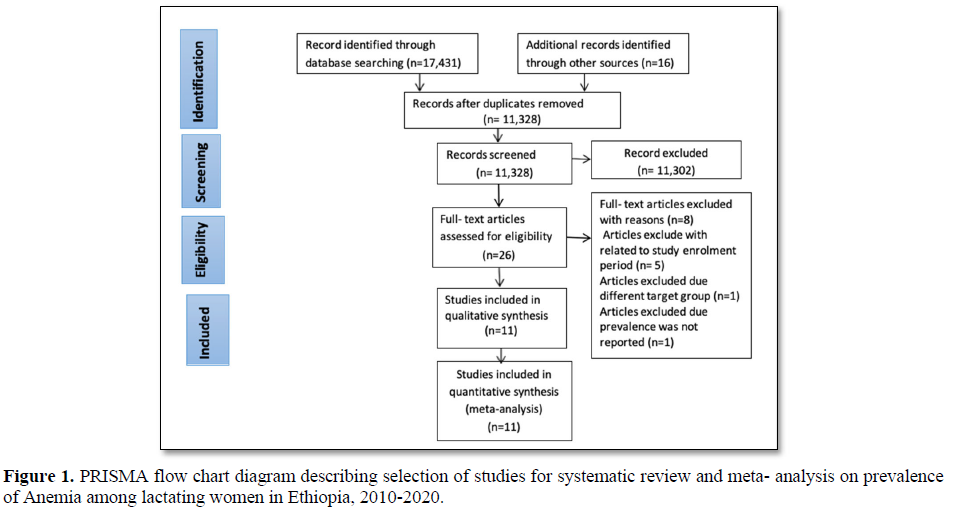 Among the eleven studies included in a systematic review and meta-analysis, 10 studies were cross-sectional studies and one study was a longitudinal study conducted during pre-harvest and post-harvest seasons [30]. Out of 11 articles, 9 were conducted in the community setting [22,23,30-36] and the remaining 2 articles were done in a health facility setting [37,38]. Study population varied from 162 [34] to 5,047 lactating women [22]. About 13,495 lactating women were included in the analysis. The earliest study was conducted in 2010 [22], and the recent study conducted in 2017 [38] (Table 1). 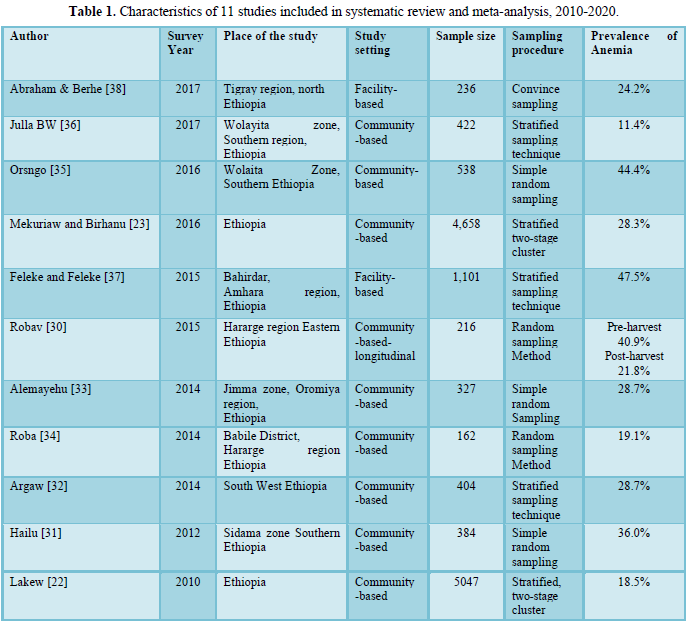 Risk of bias and heterogeneity
The risk of bias assessment of the eleven individual articles included in the systematic review and meta-analysis was carried out using Hoy 2012 tool with ten criteria described in the method section [26]. Out of 11 included studies eight studies (72.3%) had a low risk of bias [22,23,31-33,35-37] and three studies (27.7%) had a moderate risk of bias [30,34,38]. The main cause of study bias was selection bias. A high risk of selection bias was observed in five studies. Bias related to analysis was also observed in four studies. Measurement bias was observed in two studies [32,38] (Table S1).
Table S1 showed risk of bias assessment of 11 included studies using the Hoy [26] tool with ten criteria’s.

and denominator(s) for the parameter of interest appropriate?
The overall risk of bias was then scored according to the number of high risks of bias per study: Low (≤2), moderate (3-4) and high (≥5).
Out of 11 included studies eight studies (72.3%) had low risk of bias, and three studies (27.7%) had a moderate risk of bias.
The 11 studies included assessing prevalence of anemia in lactating women exhibited high heterogeneity (Cochrane Q test p= 0.00001, I2 test (98%) which is indicative to use the random-effects model (Figure 2). Nevertheless, the Egger weighted regression statistics of studies conducted on the prevalence of anemia (P= 0.2) and Begg rank correlation statistics (p = 0.3) indicated no evidence of publication bias. There was no sign of publication bias and symmetry in the funnel plot (Figure 3). To decrease the heterogeneity, subgroup analysis was performed based on the region, quality of studies, survey year and study setting. However, the heterogeneity in all subgroups was considerable (Table 2). Based on the GRADE evidence tool assessment the overall quality of evidence for the prevalence of anemia among lactating women was found to be very low due to the risk of bias and inconsistency (Table S2). 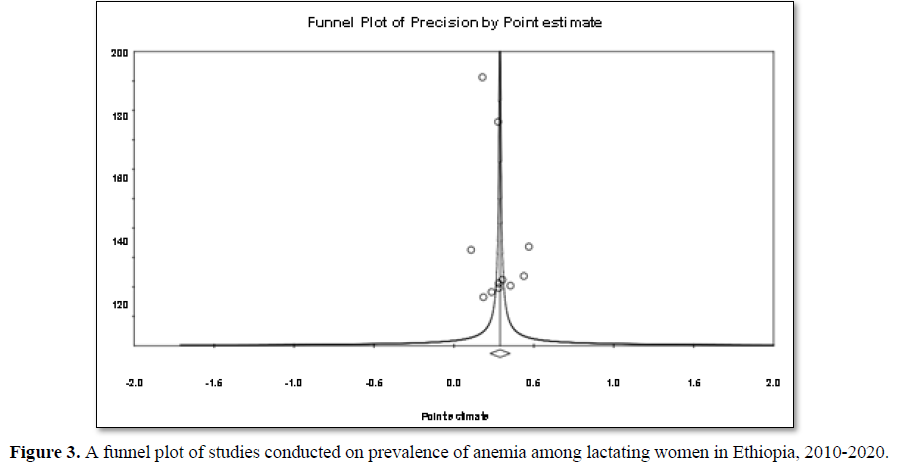 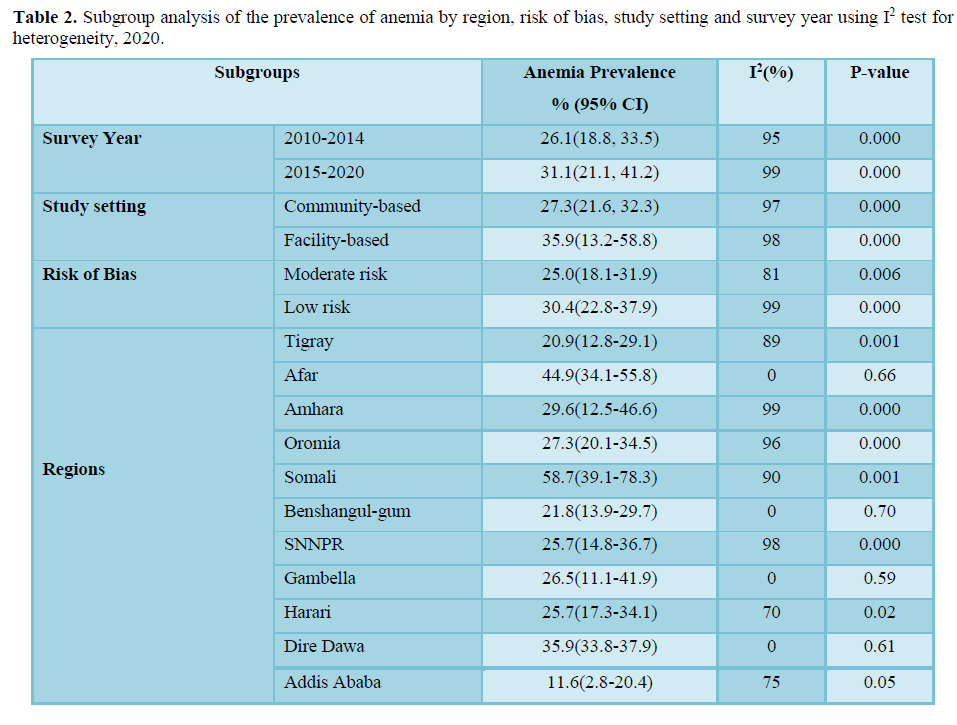 An evaluation of the degree of certainty of the evidence for the outcome (prevalence of anemia) was performed using the GRADE (Grading of Recommendations Assessment, Development and Evaluation) tool. In GRADE approach observational studies start from low quality evidence but downgraded to very low based on the five factors; risk of bias, inconsistency, indirectness, imprecision and publication bias. Evidence from observational studies can be upgraded provided no other limitations have been identified based on the five factors. Assessments were made for the five main domains (risk of bias, consistency, directness, precision and publication bias), as well as overall quality of evidence. We used study design as our starting point and downgraded by one step for each domain that was not met; based on the GRADE recommendation.
Risk of bias: Is limitations in the study design and implementation may bias the estimates of an intervention effect. Most information is from studies at low risk of bias: No serious limitations, No downgrade. The proportion of information from studies at high risk of bias is sufficient to affect the interpretation of results: Serious limitations, downgraded one level. High risk of selection bias was observed in five studies. Bias related to analysis was also observed in four studies, Measurement bias was observed in two studies and 27.7 % of information were from medium risk of bias; Downgraded by 1 for risk of bias.
Inconsistency: Refers to an unexplained heterogeneity of results. Criteria to determine inconsistency can be applied when results are from more than one study and include: statistical criteria including tests of heterogeneity (e.g. chi-squared or Chi2) have a low p-value (p <0.05), I2 value is large (> 25%). The outcome was downgraded by one due to inconsistency (tests of heterogeneity p 2 is large).
Indirectness: The question being addressed by the authors of a systematic review is different from the available evidence regarding the population, intervention, comparator, or an outcome. The quality of the evidence may be downgraded when substitute measurements or surrogate endpoints are measured instead of patient-important outcomes. Anemia status of study participants (outcome) was determined based on blood hemoglobin concentration result, hemoglobin concentration below 12.0 g/dl was considered as anemic. (CDC Atlanta method and WHO Classification); No down grade for indirectness.
Imprecision: Results are imprecise when studies include relatively few patients and few events and thus have wide confidence intervals around the estimate of the effect. For dichotomous outcomes you should consider downgrading the quality of evidence because of imprecision for either of the following two reasons: The total sample size is lower than 2000 and/or total number of events is less than 300 (a threshold rule-of-thumb value). Since the sample size (Total lactating women=13,495) is above 2000 and total events (anemic lactating women=3,604) are more than 300; No down grade for imprecision.
Publication bias: Is a systematic under-estimate or an over-estimate of the underlying beneficial or harmful effect due to the selective publication of studies.  Funnel plot analysis, Egger weighted regression and Begg rank correlation tests were used to detect publication bias and P-value0.05). There was no sign of publication bias and asymmetry in the funnel plot. No down grade for publication bias (Table 3).