Eisenmenger syndrome (ES) is one of the leading causes of perioperative death (up to 19%) in patients undergoing non-cardiac surgery. The decreased systemic vascular resistance associated with either general anesthesia or neuraxial blockade increases the degree of right to left shunting, thereby carrying substantial risk to the patient. Here, we present anesthetic management of two non-cardiac cases with Eisenmenger syndrome. Both the patients were successfully anesthetized with uneventful post-operative period and discharged with stable hemodynamic condition.

Congenital heart disease (CHD) accounts to 28% of all congenital anomalies [1]. Eight percent of patients with CHD and eleven percent of those with left to right shunts develop the Eisenmenger syndrome [2,3]. Eisenmenger syndrome refers to any untreated congenital cardiac defect with intra cardiac communication that leads to pulmonary hypertension, reversal of flow and cyanosis. Most Eisenmenger patients die from sudden cardiac death, Congestive heart failure, hemoptysis, cerebral abscesses, and thromboembolic events, from complications during pregnancy or due to non-cardiac surgery [4].

On the day of surgery, informed consent was taken by patient and relatives for general anesthesia. Invasive lines included, 18G peripheral line, 20G left radial lines for arterial BP monitors and 7.5F 16cm catheter in right internal jugular vein (IJV) for central venous pressure (CVP) monitoring and drug administration. In view of ASD, special precautions were taken every time while injecting drugs to prevent air bubble entering the line. The other monitoring parameters included heart rate, rhythm, oxygen saturation, end tidal CO2 and urine output. Anti-aspiration and infective endocarditis prophylaxis were given before induction. Patient was induced with inj. midazolam 1mg, inj. Etomidate 10mg, inj. Fentanyl 100mcg and inj. Atracurium 25mg. Inj. xylocard was given prior to intubation to attenuate hemodynamic response while intubation. Anesthesia was maintained with oxygen 60%, air and sevoflurane. Volume control mode of ventilation was set to maintain end tidal CO2 30-35mmHG. Titrated dose of Inj. Nitroglycerine was administered intra operatively to maintain blood pressure (BP) and urine output (0.5ml/kg/h). The surgical duration was for 1h 30min. At the end of surgery, patient was extubated after reversing skeletal muscle relaxation with inj. neostigmine and glycopyrrolate. Post operatively patient was shifted to intensive care unit for monitoring. After 1h patient had hypotension and tachycardia with decrease trend in CVP which was suggestive of hypovolemia. Patient was stabilized with colloid infusion. Post-surgery Arterial Blood Gases (ABG) analysis showed pH 7.37, pCO2 33 mm of Hg, pO2 77 mm of Hg, HCO3 19.2mEq/L, BE 4.8. Patient was shifted to ward the next day and discharged after two days.

Eisenmenger syndrome is a cyanotic congenital heart disease. The first clinical description was in 1897 by the Viennese Physician Victor Eisenmenger and in 1958 Paul Wood refined the path physiology of Eisenmenger syndrome as “Pulmonary hypertension due to a high pulmonary vascular resistance (PVR) with reversed or bidirectional shunt at aorta pulmonary, ventricular or atrial level” [5,6].

Hemodynamically, Eisenmenger syndrome is defined as an elevation of the pulmonary vascular resistance to 12 Woods units or to a Pulmonary-to-Systemic resistance ratio equal to or greater than 1 [7]. Eisenmenger may occur in congenital anomalies with a left-to-right shunt big enough to allow equalization of pressure between both ventricles and or pulmonary artery, and not in patients with small shunts or septal defects associated with significant pulmonary stenosis. Path physiology of the Eisenmenger syndrome has been shown in Figure 1. 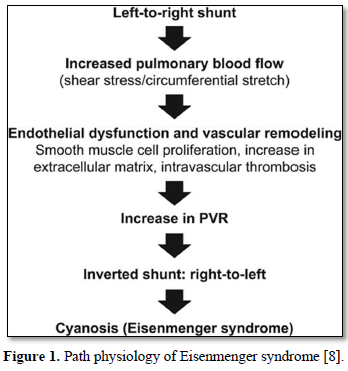 Eisenmenger syndrome is one of the leading causes of perioperative death (up to 19%) [4] in patients undergoing non-cardiac surgery (NCS). Therefore, perioperative risk and outcome depends on urgency, duration of surgery, anesthesia used and underlying pathology.

The goal of anesthetic management is to maintain the baseline PVR: SVR ratio in order to prevent an increase in right to left shunt. Either regional or general anesthesia may be used [9-11], each with its own risks and benefits. Regional anesthesia causes sympathetic blockade and decreases both preload and afterload which may be very hazardous in these patients.

During general anesthesia, intermittent positive pressure ventilation causes a decrease in venous return and cardiac output and an increase in pulmonary artery pressure, which together produce an increase in right to left shunt [9]. However, general anesthesia has been successfully used and is preferred in patients receiving antithrombotic drugs due to the increased risk of subdural hematoma following epidural or spinal anesthesia [12]. The two reasons to choose general anesthesia in case 1 patient for PFN were, first the patient was on anti platelet and anticoagulant, second to avoid sudden fall in the systemic vascular resistance in neuraxial blockade. Though the patient in case 2 was not on any anti platelet medication, the duration of surgery (D&E) prompted us to plan total intravenous anesthesia (TIVA).

The goal of monitoring in anesthesia is to detect sudden changes in the haemodynamics early so as to initiate appropriate treatment and prevent further complications. Invasive monitoring poses a specific risk in Eisenmenger patients as they are more prone for thrombus formation (due to polycythemia), have higher risk for infection and paradoxical air embolus [13]. In case 1, by considering risks and benefits, we obtained left radial line for continuous measurement of blood pressure and inserted a central venous catheter in right internal jugular vein to detect right heart failure as the right heart is ejecting against high pulmonary vascular resistance and to optimize the pre-load. In case 2, we opted for non-invasive monitoring as the patient was young and undergoing short duration procedure where the scope for wide fluctuation in heamodynamics was minimal.

Patients with Eisenmenger syndrome pose a challenge to anesthesiologists due to inability to adapt to sudden changes in haemodynamics because their pulmonary vascular bed is fixed [13]. Most of the agents used for induction and maintenance of general anesthesia depresses myocardial function and reduce systemic vascular resistance. Many authors also have recommended concomitant administration of vasopressors to avoid hypotension during induction. Combination of inj. Fentanyl and inj. Etomidate were chosen as induction agents in case 1 because of their more hemodynamic stability in Eisenmenger patients [14]. We observed no hypotension with this combination. Intubation was felicitated by Inj. Atracurium, a skeletal muscle relaxant with minimal effects on cardiovascular system. As arm-brain circulation time is shorter in Eisenmenger patients due to the right-to-left shunt, in case 2 the patient was put in lithotomy position before administering the drug in order to cutdown on anesthesia time. Inj. Ketamine [15] along with Inj. Propofol and Inj. Fentanyl was part of TIVA as it does not reduce systemic vascular resistance (SVR) in Eisenmenger patients. We avoided nitrous oxide in both the cases as it is a potent pulmonary vasoconstrictor [9], Benedikt et al. [16] have concluded Xenon as the choice of inhalational agent as it causes several physiological changes, which mediate protection of the brain and myocardium. It has lowest blood/gas partition co-efficient compared to all the inhalational agents. Also, sevoflurane shows suitable cardiovascular stability in one of the studies compared to others [17]. In case 2, as the surgical duration was less, we opted for TIVA to avoid even minimal depressant effect of inhalational agent.

As intermittent positive pressure ventilation can increase the right-to-left shunt if excessive transpulmonary pressures are used, [18] have recommended minute volumes of 5-8 l per minute with tidal volume of 5.5-6ml/kg body weight to maintain PaCO2 within normal limits in adults. Though the patient in case 2 was on spontaneous ventilation, there was no hypoxia or hypercarbia which are potent pulmonary vasoconstrictors.

Though the incidence of Eisenmenger syndrome has decreased over years due to early septal repairs, there is proportionate increase in load of these patients due to growing number of adult patients with CHD are surviving into adulthood and some into the sixth and seventh decade. Therefore, a good understanding of pathophysiology of this syndrome is essential for anesthetic management. The ultimate goal of any anesthesia technique is to maintain the baseline PVR: SVR ratio and to avoid factors that increase Pulmonary vascular resistance - like hypoxia, hypercarbia, metabolic acidosis, hypothermia, agitation, pain and tracheal suctioning.