Research Article
Awareness on Prevention of Complications Related to Immobility among Caregivers of Immobilized Patients of Pokhara
Immobility is the state in which individual experiences limitation of physical movement due to critical illness, applications of external devices to body (traction), loss of motor functions etc. Prolonged bedridden and immobilization may lead physiological, psychological, social problems to patient. Pressure sore, deep vein thrombosis, hypostatic pneumonia, constipation, contracture, urinary tract infection, urinary incontinence, muscular weakness, calculi, anxiety, depression etc. are the most common complications occurred due to prolong immobility. The main objective of the study was to assess the awareness level on prevention of complication related to immobility. A descriptive cross-sectional study design was used to conduct the study. Non-probability purposive sampling technique was used to collect data from 172 caregivers of immobilized patients of Pokhara using a semi-structured interview questionnaire. The obtained data was entered on Epi data 3.1 version and transferred into SPSS 20 version for the further analysis. The entered data were interpreted by using descriptive and inferential statistics. The findings revealed that 50.7 % of the caregivers had satisfactory level of awareness, 30.2 % had good level of awareness and only 11 % had poor level of awareness on prevention of complication related to immobility. There were significant association between age (p=0.024), relation with patient (p=0.002) and duration of total number of days with the patient (p=0.001) and awareness level. The study concluded that effective health education programs should be planned and implemented to increase awareness of caregivers regarding preventive measures of complications related to immobility.

Family members play important role in providing adequate care to patient. At that time, they also experienced numbers of problems; physical, psychological, behavioral changes as well as economic burden which impact on their daily lifestyle as well their health [3]. All the type of complications of immobility, effects on quality of life. Major and more complex form of complications, decreased more quality of life if adequate care was not provided [4]. Among the complications, pressure ulcer is most common and approximately 1.7 million patients suffer from pressure ulcers worldwide every year. The incidence of Pressure ulcer is higher in developing countries than developed country due to lack of the knowledge and practices [5]. Preventive measures are better as cost for treating pressure ulcer is 2.5 times higher than preventing pressure ulcer [6].

A 3-month prospective multicenter study conducted in China to describe association between major complications of immobility during hospitalization and the patients’ health-related quality of life after discharge found that major complications of immobility were significantly associated with reduced health related quality of life [4].

The research approach used in the study was quantitative approach by using cross sectional research design. The study was conducted in 2019 from 22 January to 5 February among caregivers of immobilized patients from ICU, Ortho and Geriatric ward of Hospitals in Pokhara (Pokhara Academy of Health Sciences, Manipal Teaching Hospital and Gandaki Medical Teaching College and Research Centre. All the caregivers included in this study were 20 years age and above and stayed with patient for at least 6 h per day. Non-Probability purposive sampling technique was used to collect data from caregivers.

The study was carried out after getting approval from IRC, Pokhara University and official permission from Hospitals of Pokhara. Informed verbal and written consent were obtained from each caregiver after explaining the purpose of the study. Time taken for each caregiver for data collection was 15-20 min. Anonymity and confidentiality were maintained throughout the procedure. A Semi structured interview questionnaire was used to collect data which was developed after reviewing related literature and Content validity of the research instrument was established by consultation with research advisor and content expert. The research instrument was translated into Nepali version and retranslated into English language by the bilingual translator to maintain accuracy. The research instrument consisted two parts i.e., socio-demographic data (caregiver and patient) and semi structured questions related to awareness on preventions of complications related to immobility. There was total 28 questions regarding preventions of complications related to immobility with total score 45 in which 6 of them were multiple choice questions.

All collected data was reviewed and checked daily for its completeness, consistency and accuracy. The data was organized, coded, classified and entered in Epi data and transferred in Statistical Package for Social Sciences (SPSS) version 20 for further analysis. Descriptive statistics (such as frequency, percentage, mean, standard deviation) and inferential statistics (chi-square test/ fisher exact test) were used for data analysis. Each correct response for awareness was given 1 score and total score was 45. The total score was converted to percentage for awareness. On the basis of score percentage obtained by the caregivers, awareness level was categorized as Good (≥80%), Satisfactory (60-79%) and Poor (<60%) [8].

The following tables show the results from the data collection conducted and tabulated as per the research method adopted for the study:

Table 5 illustrates that more than half (58.7%) of the caregivers had satisfactory awareness on Prevention of Complications related to Immobility and only 11 % had poor knowledge. 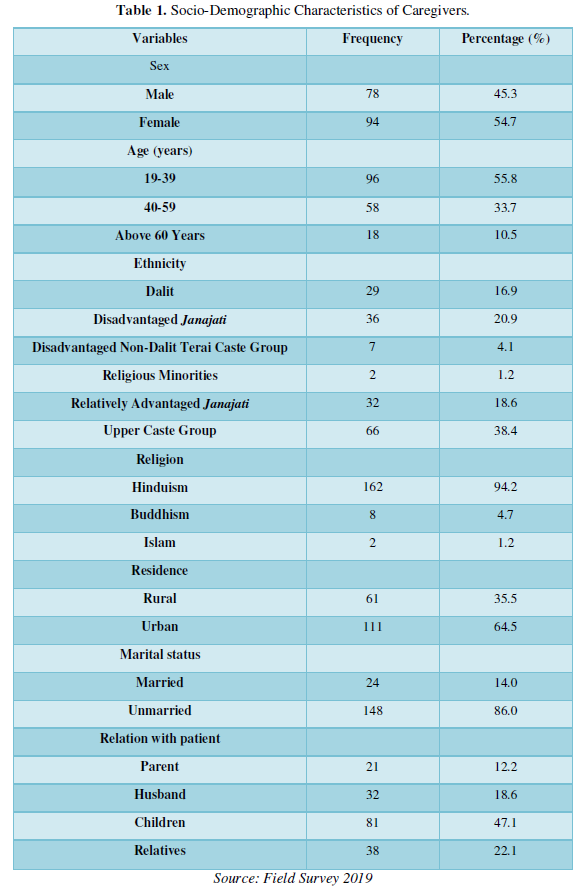 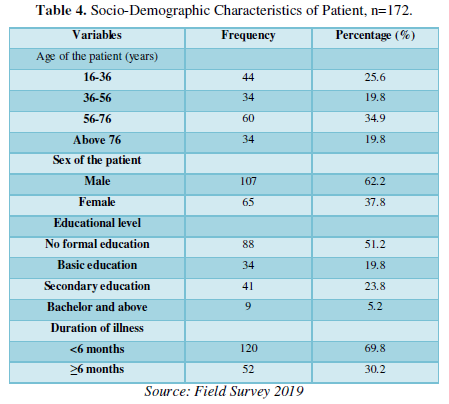 Table 7 illustrates that almost all (97.1%) of the caregivers answered accident and 84.3 % answered chronic illness as the causes of immobility. Regarding the complications of immobility, 82.6 % of the caregivers answered joint stiffness, 58.1 % osteoporosis, 54.1 % orthostatic hypotension, 47.1 % pneumonia, 45.9 % stasis of respiratory secretion, 42.4 % thrombus formation whereas 38.4 % answered osteoporosis and only 15.1 % as urinary incontinence. Similarly, most (98.8%) of caregivers responded to frequent changing positions to prevent pressure sore formation. Regarding breathing and coughing exercise, almost (80.2%) caregivers responded on every 4th h. Majority (85.5%) of the caregivers responded on massaging, 79.1 % on ankle exercise and only 34.9 % on maintaining body weight to prevent joint stiffness. 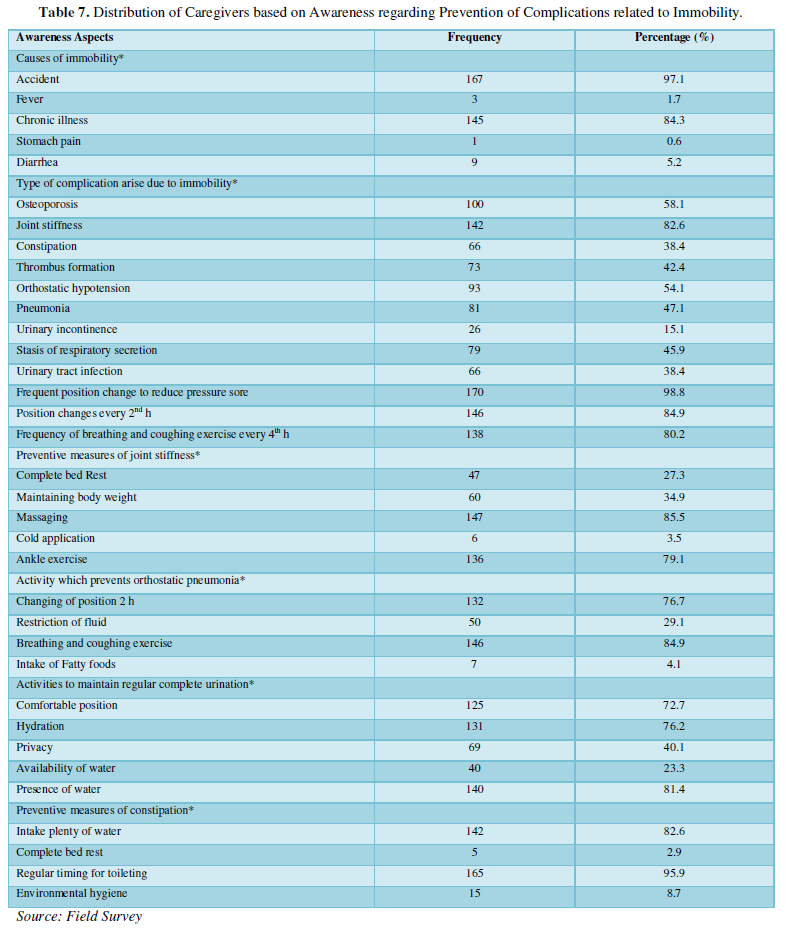 Regarding regular and complete urination to immobilized patients, three fourth (81.4%) of the caregivers responded on need of toilet, 76.2 % on maintenance of hydration, 72.7 % on comfortable position during voiding and only 40.1 % responded on need of privacy. Maximum number (165) of the caregivers responded on regular timing for the toilet and 162 on intake of plenty of water for preventing constipation among immobilized patients.
Table 8 illustrates that the age (p=0.024) of caregiver and relation with the patient (p=0.002) of the participants were found to be significantly associated with level of awareness.
Table 9 revealed that there is no any significance association with socio-economic variables.
Data presented in Table 10 revealed that the total number of days stay with patients was found statistically significant (p=0.001) with level of awareness. 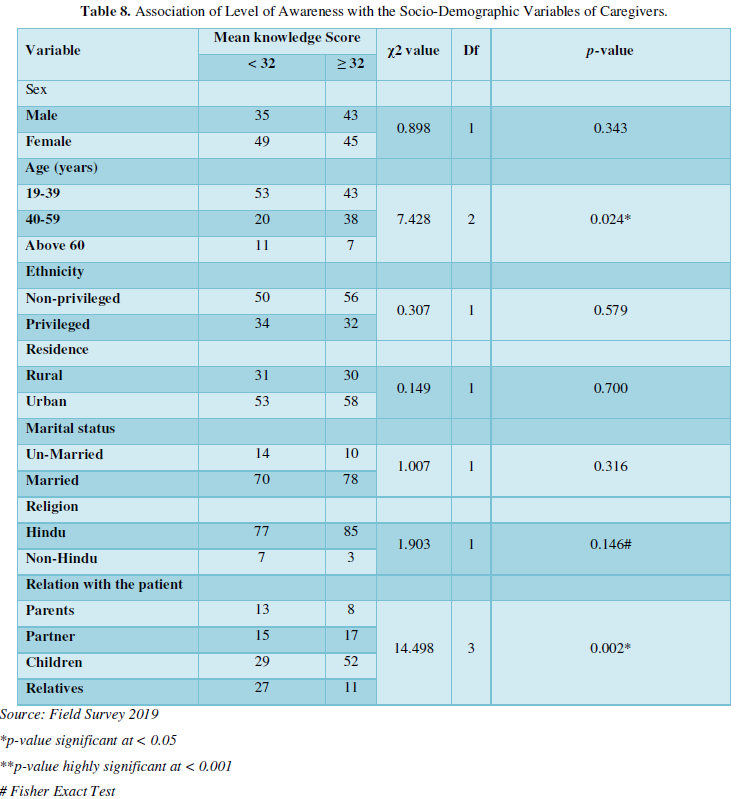 The primary aim of this study was to assess Awareness on Prevention of Complications related to Immobility among Caregivers of Immobilized Patients. The study further assessed factors associated with level of awareness on prevention of complications of immobility which includes socio-demographic, socio-economic and Hospital stay related information of the caregivers. The major findings of the study are as follows:

The present study shows that most (94.5%) of the caregivers knew preventive measures of constipation and most (98.8%) of the caregivers responded on frequent changing position to prevent pressure sore formation. This finding was supported by studies carried at Bir Hospital, Kathmandu [8].

Awareness on Prevention of Each Complications Related to Immobility

The findings of the study concluded that more than half of the caregivers had satisfactory knowledge regarding preventive measures of complications related to immobility. The awareness level of caregivers regarding prevention of complications of immobility is significantly associated with age, relation with patient and total number of days stay with the patient. Therefore, close relatives should be encouraged to give proper care to immobilized patient. Further, effective health education programs should be planned and implemented to increase awareness of caregivers.

The authors express humble gratitude for the unforgettable support and help provided by of Pokhara University, Hospitals of Pokhara, and caregivers of immobilized patients.
Download PDF View PDF