Review Article
Effect of Indirect Sinus Lift using Osseodensification Technique on Osseous Dimensions at the Antral Floor in Dental Implants Placement
Dental implants are a predictable, effective and dependable way to restore missing teeth. Furthermore, dental implants restore the function and aesthetics of edentulous and partially edentulous individuals' natural dentition. During the first 4 months of healing after extraction, according to observations and measurements, the buccal-lingual ridge undergoes a reduction of approximately 5 to 7 mm with a 2- to 4.5-mm loss of vertical bone height Several studies have observed greater apico-coronal changes when comparing multiple adjacent extraction sites to single sites. The interface zone between bone and implant has been the concern of a vast number of recent publications. Ridge bone resorption is a common event that occurs in tooth loss areas known as primary stability, is a crucial factor to achieve implant osseointegration. Recently, a drilling concept has been introduced for the placement of endosteal implants through an osseodensification drilling. The theory behind this technique is that drill designing allows the creation of an environment that increases the initial primary stability through densification of the osteotomy site walls by means of non-subtractive drilling.

Bone density, surgical procedure, implant thread type, and shape are the most important elements in strengthening implant primary stability. The insertion torque peak has been shown to be linked to implant primary stability and host bone density; high insertion torque can dramatically improve the initial bone-to-implant contact percentage (% BIC) as compared to implants placed with low insertion torque values. For every 9.8 N cm of torque given to a single tooth implant repair, Ottoni colleagues found a 20% reduction in failure rate [6-8].

The conventional progressive drilling approach, which uses gradually larger clockwise twisted drills revolving from 800 to 1500 rpm under adequate irrigation to avoid overheating the bone, is the conventional method for implant site preparation. Both researchers and manufacturers clearly sought to build equipment to increase osseointegration and overcome some of the traditional drilling procedure's technical sensitivities, such as the fear of bone necrosis, the risk of harm to nearby structures, and drilling precision [10-13].

An alternate strategy was investigated to overcome possible limitations of current approaches for osteotomy preparation. This modern technology employs an additive method (Osseodensification-OD) that employs custom-designed burs and combines current additive principles for osteotomies with drilling speed and control. The OD approach is distinguished by the fact that, rather than eliminating bone particles as is frequent with traditional instruments, it preserves bone particles by compacting them into the osteotomy wall. Another contrast is in the instrumentation's bur design: The burs have a wide negative rake angle that acts as a non-cutting edge, allowing for improved bone density as the osteotomy expands [14].

MATERIALS AND METHODS
This study will be conducted on 12 patients. Patients having good general health conditions without active periodontal diseases will be considered. Patients having any of the conditions including systemic diseases that influence wound healing like diabetes mellitus and with reduced alveolar bone height less than 4mm will be excluded from the study.
A total number of 12 implants in patients in the above criteria will be included in the study. After clinical and radiographic examinations of maxillary alveolar ridge, alveolar ridge of 6 -8 mm height will be chosen (the minimal accepted height of remaining bone will be 6 mm). Minimum alveolar width should be more than 4 mm. All patients will have preoperative evaluation of alveolar height using Cone Beam Computer Tomography (CBCT) on all four aspects i.e. mesial, distal, buccal and palatal.
Under local anesthesia, a full thickness mucoperiosteal trapezoid flap (with a crestal incision) will be reflected. Full thickness mucoperiosteal flap will be raised on the buccal and palatal aspects of cortical plates with minimal tissue reflection. With a surgical guide (stent), the exact position for the implant will be decided. Pilot drill of 2mm shall be used with length 1mm short than the alveolar height. Densah bur 2mm diameter in Osseodensification mode will be used up to the sinus floor. Densah bur of 3 mm in Osseodensification mode will then be advanced up to 3 mm past sinus floor. Densah burs of 4 mm and 5 mm diameter will then be advanced up to 3 mm past sinus floor, if needed. Then the implant should be placed of desired height of 10mm and adequate diameter according to width of sinus floor. After placing the implant, torque will be measured with torque wrench and values will be noted. Also the changes in the vertical height of the alveolar ridge shall be evaluated using CBCT after 1 day and 4 months.
Inclusion and exclusion criteria
Inclusion criteria:
Exclusion criteria:
RESULTS
This study was designed to evaluate the changes in the height of alveolar ridge in 12 implants placed in vertically deficient ridge (H- 6 to 8 mm) performing Indirect Sinus Lift Technique followed by immediate implant placement. Models, orthopantomograph, segmental Cone Beam Computer Tomography (CBCT) were made to estimate the height of remaining bone preoperatively. Indirect Sinus Lift Technique using Osseodensification using Densah Burs was performed and endosteal implants were introduced into the prepared site and evaluated for the primary stability using a torque wrench. The stability of the implant was confirmed by application of 25 Ncm force by the torque wrench. Stability at this value was considered satisfactory for primary stability.
Following implant placement, the patients were directed to a comprehensive CBCT evaluation of the operated area within 24 h. Readings were obtained of the alveolar crestal bone height from the antral floor 4 months after implant placement; similar readings were obtained using the same CBCT machine and maintaining an identical recording methodology. These readings were obtained before exposure for removal of cover screw and placement of the gingival former / healing abutment.
Method of statistical analysis: Data obtained was entered and sorted in Microsoft Excel (v.2013). Statistical analysis was performed using Statistical package for social sciences (SPSS) software (v.21.0). Descriptive statistics was performed for the different parameters assessed in the study. Comparison between different time intervals was performed using Paired t-test. All statistical tests were performed at 95% confidence intervals; keeping p value of less than 0.05 as statistically significant (Table 1, Figure 1 & Table 2). 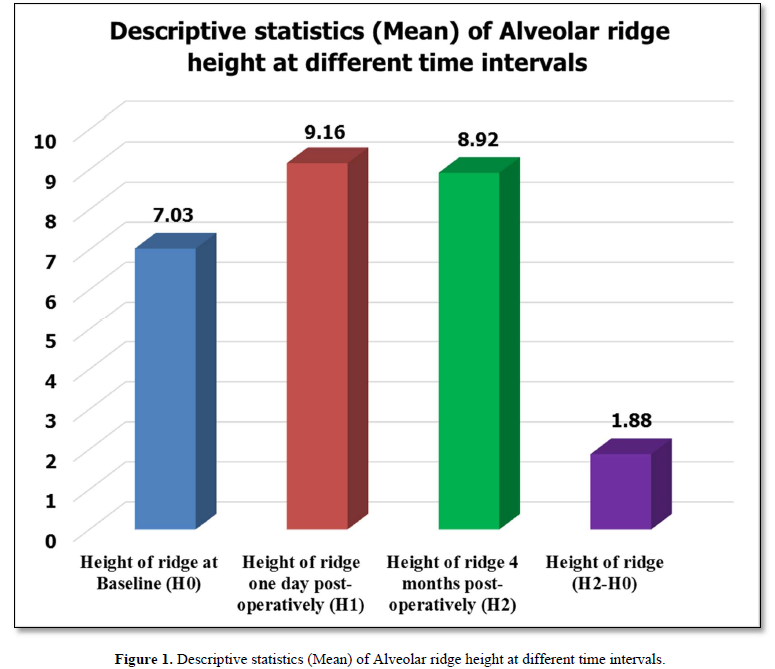 By producing a crust of enhanced bone mineral density surrounding the osteotomy site, the osseous densification approach boosts primary stability and the proportion of bone at the implant surface, according to this study. The insertion and removal torques of implants put in osseous densification osteotomies were substantially higher. Despite the fact that osseous densification forces and torques were somewhat higher than drilling, this study showed that this novel osteotomy approach is clinically equivalent to drilling. When irrigation and a bouncing surgical procedure were utilized, there were only minor temperature changes, suggesting that this technique is safe [3].

Compaction of cancellous bone owing to viscoelastic and plastic deformation, as well as compaction autografting of bone particles throughout the length and at the apex of the osteotomy, are two ways that the osseous densification preparation approach retains bone mass. Other osteotomy procedures that compact bone by deformation have been described earlier, and impaction autografting has been utilized to increase the stability of complete hip replacements. The ideology of these approaches contradicts the conclusion of bone drilling, which is that healthy bone should be preserved, especially in areas where density is already low [3].

According to our experience, the formation of osseointegration is influenced by the following factors: 1. the implant material; 2. the implant design; and 3. the implant finish 4. The condition of the bone; 5. Surgical procedure; 6. Implant loading circumstances. The implant should be made of a tissue-tolerant material that can bear the stresses at the insertion site while also being corrosion resistant. Several experts emphasize the need of a precise fit between the bone and the implant. Osseointegration is easier to establish with cylindrical, threaded implants that are implanted such that maximum contact between the implant and the bone is made [4].

Primary stability levels might readily be attained by suitable mechanical engineering and thread design, even if loose instrumentations resulting in healing chambers are used. As a result of this scenario, implants would have excellent primary stability and healing, with little interfacial remodeling early on in the implantation process, while fast bone filling occurs within the healing chambers. This dual stability mechanism should be studied further so that future dental implant systems can achieve temporal stability after implantation, which would be optimal independent of the loading technique used [7].

The osteotome technique, which uses the mechanical action of cylindrical steel tools along the osteotomic walls to compress the bone, is an alternative to implant drilling operations. This treatment resulted in trabecular fractures containing debris, obstructing the osseointegration process. In the case of the osteotome preparation procedure, the healing process is divided into two phases: resorption of broken trabeculae and bone chips followed by new bone growth on the implant surface [8].

The OD approach, which uses specific burs in a noncutting rotation, exhibited the capacity to enhance the percent BV surrounding the implants by roughly 30% and improve secondary implant stability (expressed as removal torque values and micro motion under lateral forces). The histological examination revealed that the healing process is not hampered by the bone condensation, and that bone density is increasing around the implant surface (especially in the upper portion of the implant). Furthermore, the high prevalence of mineralization nuclei bordered by osteoid tissue and osteoblast clearly implies that the bone will continue to grow in density in the long term. The burs studied have a unique shape that allows them to pulverize the bone, resulting in a larger number of mineralization nuclei than the control group. Implants implanted with this innovative OD technique had 30% to 40% greater biomechanical values than implants inserted with traditional drills, according to the study [8].

All volunteers in this study were appropriately evaluated preoperatively using cast models and Cone Beam Computer Tomography. Indirect Sinus Lift Technique using Osseodensification was performed and endosteal implants were introduced into the prepared site. Stability was recorded using a torque wrench. A minimum measurement of 25 Ncm was considered satisfactory for inclusion in the study. Following implant placement, the patients were directed to a second CBCT for evaluation of the operated area 1 day postoperatively. Readings were obtained of the alveolar height from crest to antral floor. Readings of crestal bone changes were obtained once again using the same cone beam computer tomography machine and methodology 4 months after implant placement. All the data obtained was subjected to suitable statistical analysis [15-20].

The above data is a sufficient indication of increased height of alveolar bone (measuring from the alveolar crest to the antral floor) using Indirect Sinus Lift Technique with the help of Osseodensification.