Review Article
A New Technique Prevent from Cement Adhesion to Abutment Surface by Using Liquid Latex Barrier
Purpose: After cementing of implant-supported cement-retained restorations, the complete removal of the cement is a serious problem. This article describes a new technique in vitro condition where liquid latex barrier is applied around the implant abutment before seating to prevent the adhesion of cement to the subgingival of the abutment.

Material and Methods: 20 standard models with implant analogs embedded in acrylic blocks and artificial silicone gums at a height of 4 mm were prepared. Subsequently, anatomical abutments (4.5mm in diameter and gingiva height 2.5-4mm) were torqued on the models. The models were divided into two groups according to the cementation procedure (cleaning with conventional sound and cleaning with liquid latex barrier technique). A blinded investigator attempted to remove all cement excess. Thereafter, the entire reconstruction was unscrewed and analyzed for the overall amount and the depth of residual cement. For the two groups, the observed power of the study for Mann Whitney U was 0.762.

Results: In the control group, the total surface area of residual cement remaining below the gingiva is 6.72 (±4,10) mm2 in average and 0.00 (±0.00) mm2 in the experimental group. As a result; there is a statistically significant difference between the control and the experimental group in terms of the surface area of the total residual cement below the gingiva (p <0.001).

Conclusions: This technique is a useful method for better cleaning on the abutment. It minimizes residual cement in- vitro conditions.

The unfavorable effects of excess cement on the success of dental implants have been discussed and studied in literature many times. In a current systematic review, the presence of cement is identified as a possible risk factor for peri-implant diseases [1]. Subgingival cement is difficult to detect and remove by the dentist only with a dental explorer. It causing more scratches and gouges on restorations and abutments than they realize [2]. Therefore, various cement cleaning methods have been reported in the literature to remove excess residual cement after cementation. Hess TA [3] describes a stretching polytetrafluoroethylene tape technique in which Polytetrafluoroethylene (PTFE) tape is placed around the implant abutment before seating to protect the adhesion of cement to the subgingival aspect of the abutment whether it is metal, porcelain, or zirconia. It is a simple technique and PTFE tape will not enlarge the peri implant sulcus because it is less than 50 µm thick when stretched. On the contrary to dental restorations, the use of cord is no longer suitable for preventing cement in peri-implant tissues. The cord increases the potential space of the peri implant sulcus, thereby increasing the flow of cement apically and possible entrapment of the fibrous cord [4-6]. Rubber dam insertion before cementation has also been tried in various case reports [7]. Ferreira [8] carried out a study on the cleaning effectiveness of dental floss used after cementation of implant crowns. The experimental “circular crossover superfloss technique and the traditional “C” shaped superfloss technique evaluated the cleaning activities of cement. The aim of this study is to evaluate the effect of the application liquid latex barrier during the cementation of cement-retained implant-supported restorations to prevent adhesion of the residual cement onto the implant abutment and to determine the effect of implant abutment margin position on the area and depth of the residual cement after cleaning operations. According to the results of this study, the experimental technique showed statistically significantly less cement after the cementation of the implant crowns compared to the traditional technique. Not one technique is favorable on the other and the clinician should choose what is more convenient to his/her skill.

The 20 implant analogs (Bego Implant Systems GmbH, Bremen/ Germany) were placed into acrylic blocks in such a way that directions and three-dimensional positions of the analogs (bukkolingual, cervicoinsizal and mesiodistal) would be the same. İn order to simulate the gingiva a silicone gingival mask (Zermack Gingifast Elastic, Badia Polesine/ Italy) was applied. On the other hand, onto the transparent acrylic model UFI gel P (VOCO GmbH, Cuxhaven, Germany) adhesive was applied to connect the silicone gingival material. Thus, a flat silicone gingival surface was formed in such a way that the height of the anatomic titanium abutments (SUB-TEC Plus Ti-Pfosten gingiva height 2.5-4mm, Bego Implant Systems GmbH, Bremen/ Germany) which were used would be equal to the gingival height (4 mm) of the lingual aspect. They were scanned by digital measuring device (3 Shape D810, Copenhagen, Denmark) and the data was transferred to the computer environment. The restoration was designed in the form of upper first premolar teeth by using CAD software (3 Shape Dental Designer, 3 Shape A/S, Copenhagen, Denmark). A total of 20 polymethyl methacrylate (PMMA) temporary crowns were produced by using PMMA block (Dental PMMA, Tian Shwu Co., LTD./Taiwan) as a material by five-dimensional CAM unit (CORİTEC 350i, imes-icore GmbH). Figure 1 shows one of the test samples. 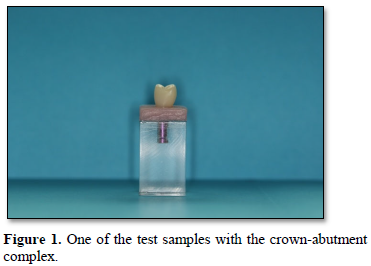 The models were divided into two groups as control (cleaning with conventional probe method) and experimental (cleaning with liquid latex barrier technique). In the experimental group, the latex band was tied after it was wrapped in a lap around the neck region below the margin of the abutment and the liquid latex barrier (BN NYE liquid latex) was carefully applied to the metal surface at the bottom of the step margin of the abutment by brush and left to dry completely (Figure 2). The abutments were carefully placed in the model and were torqued to 30 Ncm on the analogs. Screw head of the abutment was completely closed with teflon tape before the cementation process. The surface of the temporary crown below the gingiva was isolated with vaseline to prevent adhesion of the cement. In this study, zinc polycarboxylate cement (Poly-F® Plus / BondexTM, DENTSPLY DeTrey GmbH) which is the permanent cement for cementation process was used and the cement was prepared according to the manufacturer’s instructions. The crowns were completely filled with the material and cemented under finger pressure by a single practitioner (Figure 3). After the cement was hardened the excess material was broken with a probe around the crown margin. Then, the latex tape was carefully removed by keeping it from the long section which was left for easy access by pulling it to the right and left and then upwards. Figure 4 shows cementation procedure of the experimental group. In the control group, the crowns were completely filled with cement and adhered under the same standard pressure as the experimental group. After the cementation procedure for the hardened material, the cleaning operation was carried out carefully by using only a conventional probe without damaging the artificial gingiva. After this procedure, temporary crowns were accessed to screw entry by means of a hole drilled with a diamond rond drill in the predetermined occlusal access points and teflon was removed and the screw of the abutment was removed together with the abutment by reverse torque. 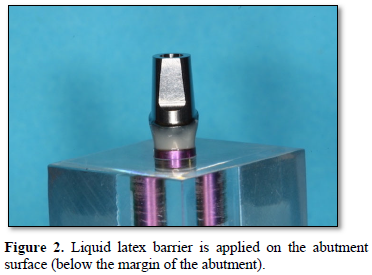 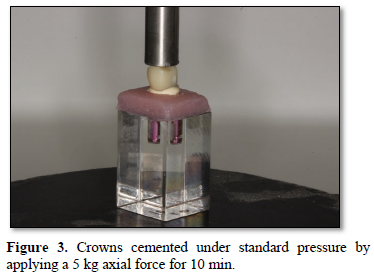 Abutment which the liquid latex barrier was applied carefully placed into the model. C, After the cement was hardened the excess material was broken with a probe around the crown margin. D, the latex band was carefully removed by keeping it from the long section which was left for easy access by pulling it to the right and left and then upwards. E, Crown-abutment complex was removed from the model. F, crown-abutment complex with cement and latex residues.

Crown-abutment complexes were examined under light microscope (SZ61/SZ51 Zoom Stereo Microscopes/DP12 Microscope Digital Camera System, OLYMPUS). For each model, digital images were taken from 4 regions (mesial, distal, buccal, lingual) under x20 magnification. Figure 5, shows microscope image of the abutment’s buccal surface under x20 magnification of control and experimental group. Recorded images were transferred to the computer environment and linear and field measurements were performed in ImageJ program (ImageJ and NIH Image Software; National Institute of Health, Bethesda, Md). Then, the following parameters were measured: The surface area covered by residual cement on the crown surface below the gingival level (area; mm2), the surface area covered by residual cement on the abutment surface below the gingiva level (area; mm2) and distance from the residual cement left uncleaned at the most apical part of the abutment to the level of the abutment margin (Depth; mm).
Analysis was performed with IBM SPSS Statistics Ver.23 (IBM Corp, Armonk, NY) software. The difference in terms of the total residual cement area between the conventional probe method (control group) and the liquid latex barrier technique (experimental group) was performed by Mann Whitneyy U test. In the control group, Kruskal Wallis test was also used to determine the difference in the area and depth of the residual cement left in the crown and abutment in 3 regions (buccal, aproximal and lingual). Since the difference was determined significant, pairwise comparison was performed by Dunn test. In all tests, p (Figures 4 & 5). 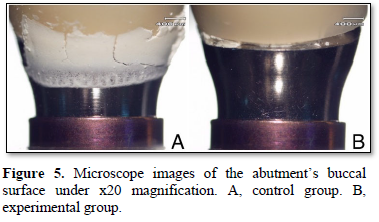 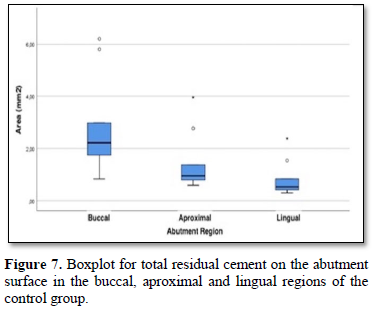 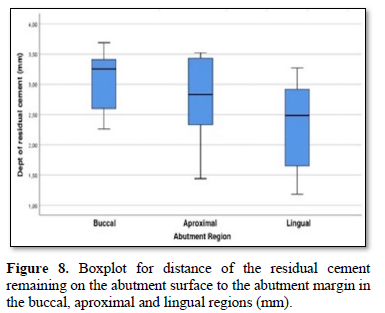 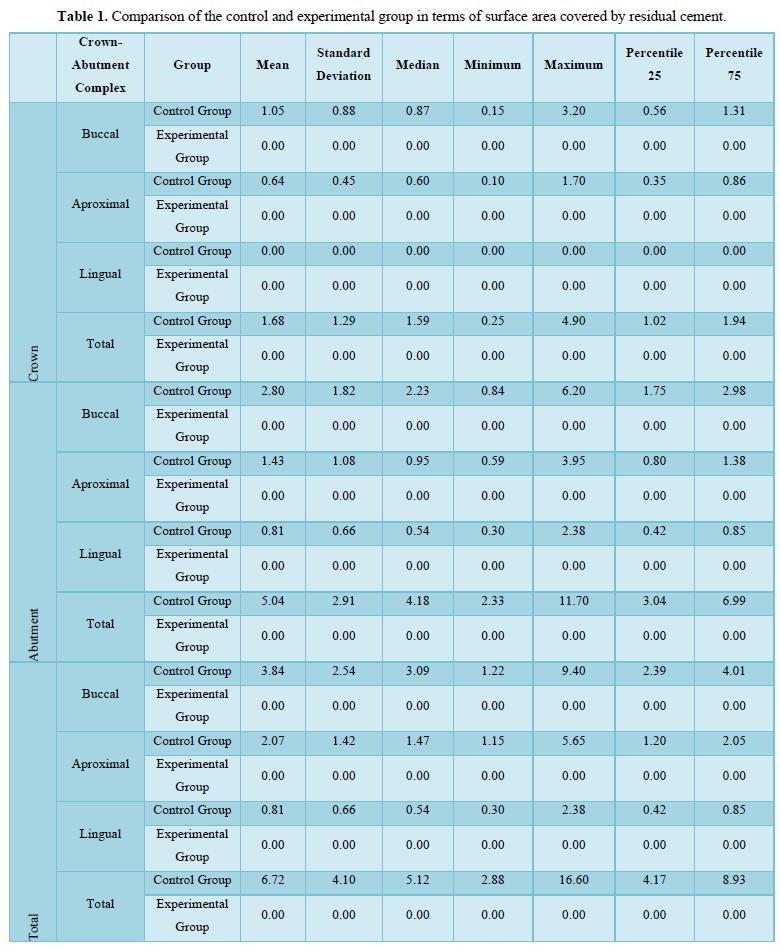 The placement of the implant supported abutment margins subgingivally is one of the possible causes of residual cement. According to the results of this study and previous ones, [11,12,15] the abutment margin should be placed as coronally as possible to minimize the amount of residual cement on the abutment surface. Clinically, this ideal situation is generally not possible due to the aesthetic concerns. Buser [16] has suggested that the restoration margin should be positioned 1-2 mm subgingivally in order to provide a suitable emergence profile and nowadays this position is still a preferred reference point for many clinicians.

In the literature, various methods have been used to determine the amount of residual cement [12-14]. These are methods such as making digital measurements by obtaining two dimensional images of residual cement with microscopy, measuring the residual cement, scaling the surface area on the photographs. The biggest disadvantage of the studies is that measurements of these photographs are two dimensional. In this study a two-dimensional measurement of surface area and depth through the microscope images was also accomplished. The disadvantage of two-dimensional imaging methods is that a part of the cement seen in one region is also seen from the other region. Another issue to be considered is use of latex as a barrier. This may cause acute and severe issues in many patients [18].

It was also aimed to completely prevent adhesion of the residual cement to the abutment surface with the experimental liquid latex barrier technique which was applied in this study. Nevertheless, these results should be interpreted with caution. Even if the used materials, the cementation and the cleaning procedures have been as close as possible to the clinical reality, the artificiality of the study arrangement may not completely reflect the clinical reflection of the results. In this study, artificial gingival silicone simulating peri-implant soft tissue has been used for each cementation procedure; however, the soft gingival silicone that was used does not completely reflect the complex structure of the peri-implant sulcus and the interaction of a specific abutment configuration with the submucosal anatomy.

Due to the resistance applied by the silicone gingiva, it made it difficult for the crowns to fit properly during cementation. Therefore, there are differences in the restoration seating between the groups. Today BN NYE liquid latex is used as a makeup artist product recommended for skin use.  In our opinion, biocompatibility tests should be done for this material to be used in the mouth. Because we don't know it may leave any kind of monomers. In the applicability of this material in vivo we need to know more about its contents. Therefore, further clinical research is needed to confirm or reject the results obtained. The lack of restoration contact in prepared model and the structure of artificial gingiva are the limitations due to the fact that this study is in vitro. The latex only prevents cement getting onto the implant materials. However, there are studies indicating that implant failure may also occur due to cement remaining in the peri-implant sulcus [19].

Within the limitations of this study, the following conclusions have been obtained: