Research Article
Periodontal Health Assessment of Prisoners in Central Jail of Durg, Chhattisgarh - Cross Sectional Study
Introduction: Oral cavity acts as a window for the rest of the body. The prison setup is a neglected part of the society requiring holistic health care approach.

Conclusion: Most of the prison inmates had bleeding on probing indicating planning of comprehensive treatment programmes.

Oral health and general health go hand in hand. The oral cavity acts as a window for the rest of the body by providing signs and symptoms of general health disorders like Diabetes Mellitus and Blood Dyscrasias and HIV. [1]. Many systemic disorders act as risk indicators, which may affect the initiation and progression of oral diseases [2]. Oral conditions also have adverse effects on general health as they may be infectious in nature and many studies have reported periodontitis causing cardiovascular diseases. [1,3].
Maintenance of good oral health is contributed by multiple factors such as socioeconomic status, occupation, diet, oral hygiene etc. [3]. Specific population group like adolescents, pregnant women, geriatrics need unique health care approach. Also, dental health needs of prison inmates differ from those of general population due to increased level of neglect, drug abuse, chronic illnesses and poor nutrition. [3,4].
In a developing country like India, the oral health problems of the prison inmates are often not prioritized. Few reasons of such deteriorating condition of prisons are that they are mostly understaffed for general and oral health care and rarely have dental services and dental health check-up. Also, health care professionals choose not to work in prison system & the availability of alcohol, tobacco, illegal drugs impose a unique and challenging atmosphere [3,5].

Such circumstances in prison setting can lead to widespread increase in dental diseases among prison inmates [5].
Chhattisgarh has 5 Central Jails located in Raipur, Jagdalpur, Bilaspur, Durg and Ambikapur. Durg area has 1 Central jail with maximum accommodation of 1606, all the while housing 2602 inmates against the capacity [6,7].
Studies have reported that the prisoners usually belong to lower socioeconomic status with lower educational qualifications when compared to the general population [8,9].
Most oral diseases are preventable in nature. People belonging to lower socioeconomic status seldom use preventive health care services and have more chances of practicing detrimental health habits [8,9]. Often, only serious oral health diseased prisoners are referred to the nearby Government Hospitals for treatment while others are neglected [10]. Not many studies are conducted with regard to periodontal status of the prison population in Chhattisgarh. This study is an attempt to highlight the oral health status of the prisoners, focusing mainly on periodontal health, and to provide adequate resources required in prison system.
Thus, aim of the study is to assess periodontal status of prison inmates of Durg Central Jail and to know if age and duration of imprisonment has an effect on periodontal status.
METHODOLOGY
Study Design: A cross sectional study was designed and carried out at Central Jail Durg, Chhattisgarh. The study was carried out for duration of 2 months, from 15th March to 15th May 2019.
Study group: 375 prisoners, both male and female, belonging within the age group of 20 to 69 years were examined.
Sample size, sampling methodology & frame: Total number of prisoners present in jail at the time of survey was 2000.Sample size was calculated by using online website “checkmarket.com”. With 5% as margin of error and 95% confidence level, minimum sample size required for survey was 323.
Of all the prisoners that had reported for the oral examination, 375 were chosen on a basis of convenience sampling.
Pre-recorded data of prisoners on that day was obtained from Jail Authorities and taken as sampling frame.
Inclusion criteria: Prisoners of both the genders within the age group 20 to 69 years were taken. Prisoners residing for more than or equal to 2 years were included in this study.
Exclusion criteria: Uncooperative patients were not admitted in the study along with the exception of edentulous subjects and patients psychologically unfit for the investigation were excluded. Also, patient having less than 2 teeth present in each sextant on examination were excluded.
Ethical Clearance
The clearance for the study was obtained from the Ethical board committee of Maitri College of Dentistry & Research Centre, Durg. Informed consents were obtained from the participants & necessary permissions were taken from the prison authority.
Official permission
Prior permission was taken from the superintendent of District Jail, Durg to conduct study among prison inmates.
Training and calibration
Three calibrated interns participated in study and carried out oral examination of prisoners. Their training had previously been carried out in a pilot study where intra and inter-examiner reliability was obtained by calculating Cranach’s alpha through split half technique and overall alpha value obtained was 0.8.
Armamentarium
Standardized instruments –WHO CPITN-E probe (API) were used for recording data along with mouth mirrors (API) & William’s graduated periodontal probe (API), explorer, tweezers, PMT sets (probe, mouth mirror and twizzer).
Mouth masks, gloves, antiseptic hand-wash, sterilizing pouches were used alongside.
Proforma
The data was recorded in a modified WHO Oral Health Assessment Form (1997), which comprised of demographic detail-age, gender, duration of imprisonment, tobacco habits, oral hygiene aids used [11].
Collection of Data
Daily and weekly schedule were made and prisoners were examined in Jail’s hospital. 15-20 minutes was given to examiner for examination of each individual. Each examiner was assigned with an assistant who wrote the demographic details, CPI and LOA score of each sextant.
Statistical analysis
The data evaluation was carried by entering the information manually into the computer and a master table was created in Microsoft Excel (Microsoft 365 version). The total data was categorized accordingly and presented as individual tables. Statistical analysis was carried out by using SPSS version 21.0 (SPSS Pty Ltd, Chicago, IL, USA). Frequency distribution and Chi-square tests at 95% confidence interval was used for analyzing the results. Level of significance was fixed at 5 % (p<0.05).
RESULTS
Demographic Details
Study population comprised of 342 (91.2%) males and 33 (8.8%) females. (Table 1) Study population was categorized according to age ranging from 20-29 years to 60-69 years. Most of the convicts, 133 (35.5%) were aged between 20-29 years age group and only a few, 8 (2.1%) belonged to 60-69 years age group. Detailed description given in Table 1.
Study population was further classified according to duration of imprisonment ranging from 1-3years,4-7years and 8-11years. Maximum prisoners 153 (40.8%) were in jail for 4-7 years. Detailed description of duration in jail is depicted in Table 1.
Data was also obtained on various oral hygiene aids and tobacco habits prevalent among prisoners. Maximum prisoners 106 (28.3%) used finger and toothpaste/toothpowder as cleaning aid while 28 (7.5%) used no oral hygiene aid. Data on tobacco usage showed that 111(29.6%) used smokeless tobacco, 121(32.3%) used smoking tobacco and 27(7.2%) used both forms of tobacco with prevalence of 69.1% tobacco usage among study population. 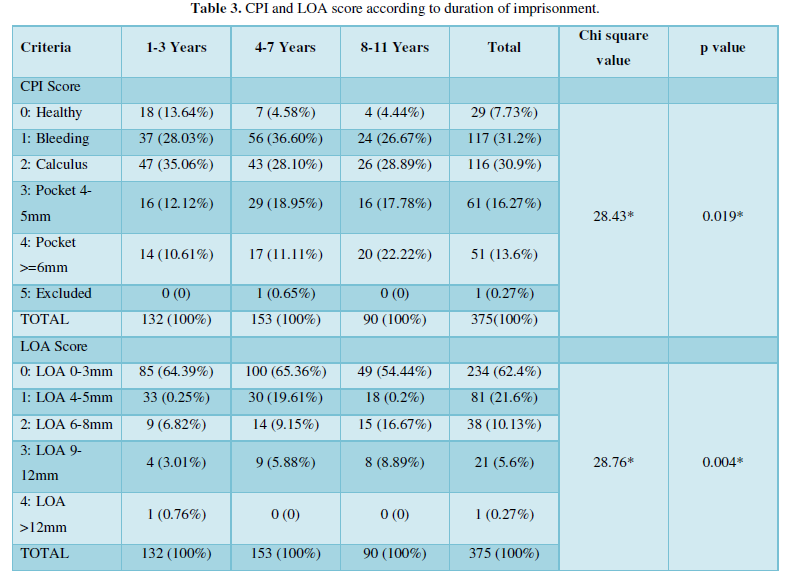 Loss of Attachment in study population
Loss of attachment was noted immediately after recording CPI score. Loss of attachment gives an estimate of the lifetime accumulated destruction of the periodontal attachment in an individual. The extent of loss of attachment is recorded using the following scores, score 1 indicates 0-3 mm loss of attachment, score 2 indicates LOA of 4-5mm, score 3 a LOA of 6-8mm, score of 4 shows LOA of 9-12mm and score 5 a >12mm LOA. [11].
Considering all age groups, maximum prisoners 234(62.4%) had a score of 0, indicating LOA of 0-3mm. detailed description in Table 2. There was statistically significant difference between LOA scores and age with p=0.019.
According to duration of imprisonment, in each category, maximum LOA score obtained was also 0 (Table 3). There was statistically significant difference between LOA scores and duration of imprisonment with p value=0.004.
There was no statistically significant difference between gender and CPI, LOA scores with p value= 0.86 and 0.96, respectively.
DISCUSSION
Present study was done among prison inmates of Durg Central Jail. Demographic details of the study comprised of 342(91.2%) males and 33(8.8%) females. Demographic analysis showed that maximum prisoners 153 (40.8%) were imprisoned for duration of 4-7 years. Only 90(24%) inmates of the study population use toothbrush and toothpaste/toothpowder as cleaning aid and the prevalence of tobacco use was 259(69%).
Data on oral hygiene aids reveal that most of the prison inmates, 106 (28.3%) use finger along with toothpaste/toothpowder which is in accordance with the study conducted by in Mathura, Jaipur and Brazil respectively [15-17]. Whereas, the studies carried out by Nobile [4] and Osborn [12] observed that 96% and 86% of inmates use toothbrush and toothpaste, highlighting the behavior of Jail authorities towards prisoners’ oral health. Also, the study conducted by Reddy [14] had 66% prisoners using toothbrush and 29% prisoners using finger as oral hygiene aid.
In the present study, 119(29.6%) used smokeless tobacco; 121(32.3%) used smoking tobacco and 27(7.2%) use both forms. In a study done by Yunus [14] in 2019, it was found that 8.1% used smoking form of tobacco, 54.6% used smokeless tobacco and 19.5% used both forms of tobacco among bidi rolling workers in Durg district. Also, in epidemiological review done by Spaulding [13] it was found that the prevalence of smoking pattern among prison population to be very high in comparison to general population among Indian men (75% vs 11%). Results obtained in present study is in accordance with the data obtained by Spaulding [13].
Prevalence of periodontal disease in the study was observed to be 92.3%. According to a survey done in Durg- Bhilai area in 2016, 27.5% individuals belonging to age group of 35-44 years suffered from bleeding on probing. [19]. Similarly, according to the present study 38.6% individuals grouped under 30-39 years age group suffered from bleeding on probing. Thus, there is a need to educate and improve the personal hygiene methods along with making provisions for dental treatments in the study population.
Study done by Dhanker [15] in Mathura found variations among inmates mostly due to prison system, food habits, literacy rate, type of stressors and access to medical and/or dental health care services, if any. These factors can contribute for variations of periodontal status in our study as well.
Present study shows that 29(7.7%) inmates had a CPI score of 0 indicating healthy periodontal status, which resembles the study done by Nobile [4]; while only 1(0.2%) inmate had a CPI score of 5 [4]. Most of the prisoners 117(31.2%) had a CPI score of 1 which is in agreement with the study of [5].
Prisoners with CPI Score of 1 were majorly from age groups of 20-29 years and 30-39 years, (together, 105 (89.74%)), which is not in accordance with the study conducted by Dhanker [15] who found the overall maximum CPI score to be 2.
The criteria of periodontal pocket 4-5 mm (CPI score 3) were found to be maximum in the age group 40-49 years with 23(37.7%). Likewise, CPI score of 4 was maximum of 16(31.4%) shown by age group 50-59 years. This shows decline in periodontal condition with increasing age which is in agreement with the study done by [5,12,18].
According to the data collected, CPI score of 1 showed maximum prisoners of the 4-7 years duration and CPI score of 4 presented majority of the prisoners serving a sentence of 8-11 years. This represents that there was worsening of periodontal condition with increase in duration of imprisonment which is in accordance with the study done by Singh [20].
Majority of the study population, 234(62.4℅) inmates had a loss of attachment of 0-3mm, out of which 113(30.13%) inmates were in the age group of 20-29 years. Only 1 (0.26%) inmate had a LOA score 4 and belonged to the age group of 40-49 years which is in accordance with the Dhanker [15].
There was a significant difference observed in CPI and LOA scores among prisoners with respect to duration of imprisonment with p value obtained as 0.019 and 0.004 respectively which is also similar to the data observed in the study conducted by Dhanker [15].
RECOMMENDATIONS
CONCLUSION
Within the limitations of the study, it is concluded that most of the prisoners were having bleeding on probing (CPI score 1) indicating need for preventive care for the prison inmates.
The data provides us with a baseline data for further treatment programs.
The present study shows the shortfall in our system in order to cope up with the problems faced by the prisoners. Provision of tobacco counsellors, dentists and adequate funding should be provided on a regular basis.
Download PDF View PDF