Review Article
Acceptance to a “Sugar Free Campus” Concept in a Dental College: A Questionnaire Based Study
Introduction: Sugar is a risk factor for dental caries, obesity and various health conditions. Promoting a healthy food environment enables people to adopt and maintain healthy dietary practices. Hence, a precise and comprehensive assessment is required to assess the willingness of a dental institute towards sugar restrictions in the campus.

Aim: To assess the acceptance to a “sugar free campus” concept in a dental college: a questionnaire-based study.
Methodology: A validated 14-point questionnaire-based study tool was administered to the staff, postgraduates and undergraduates of the college in this cross-sectional study. The assessment was done using a 5-point Likert scale for each question. The questionnaire also included a section for additional comments.
Results: 451 eligible questionnaires were obtained (response rate: 90%). Mean score of 45.37 ± SD 7.567 was obtained across the study population (N = 451). Highest score was seen in lecturers (mean 49.39 ± 8.176) and lowest score was seen in 1st year postgraduates (mean 41.79 ± 7.544). Highest score was seen in Pediatric Dentistry department (mean 51.57 ± 8.299), lowest was seen in Periodontology department (mean 38.94 ± 7.526). The most strongly agreed upon concept was availability of sugar free tea/coffee as an option in CDE programmes. The most strongly disagreed upon concept was restriction on celebrating birthdays in the institute premises.
Conclusion: There was a mixed acceptance to a “sugar free campus” concept with variations across departments and designations.
Keywords: Free sugars, Dental caries, Tobacco free campus, Upstream approach, Prevention, Health promotion
Abbreviations: WHO: World Health Organization; CDE: Continuing Dental Education; BDS: Bachelor of Dental Surgery; PHD: Public Health Dentistry; SSB: Sugar Sweetened Beverages; NCDs: Non-communicable diseases
INTRODUCTION

Marmot [1] had mentioned that ‘people's lifestyles and the conditions in which they live and work strongly influence their health and longevity’. Dietary behavior is governed by the accessibility, availability, affordability and acceptability of choosing healthy food options over unhealthy ones [2]. Subsequent to the WHO sugar guidelines (2015) [3], the objective of reduction in sugar consumption necessitates an upstream approach [4]. Changing work environment has been proven as an effective strategy in curbing tobacco use initiation, second hand smoke exposure, and the social acceptability of tobacco use [5]. Several studies have observed significant reduction in smoking prevalence among university students by adoption of ‘Tobacco free campus’ concept [6,7]. Similar strategy for sugar control could be a revolutionary idea. A dental school is an ideal environment for developing a model workplace for restriction of sugar consumption as dentists often advise sugar control.

However, no study regarding acceptability of a ‘sugar free campus’ in dental schools has been reported. Therefore, a study was undertaken to assess the willingness of a dental institute towards sugar restrictions in the campus.

The study aimed at assessing the acceptance to a “sugar free campus” concept in a dental institute.

A questionnaire-based cross-sectional study design was used for this study. Necessary clearances were obtained from the Institutional Review Board and Institutional Ethics Committee, prior to beginning of the study. Required permission was taken from the dean and a written consent was obtained from each participant. The study was conducted in a private dental institute in an urban area (Dr. G. D. Pol’s Foundation Y.M.T. Dental College and Hospital, Kharghar, Navi Mumbai). The sample comprised of approximately 80 dental staff members, 95 postgraduates and 400 undergraduates including the interns. The first-year undergraduates were excluded as their term had not started. The study was conducted during the period: 2nd August to 10thAugust, 2018. 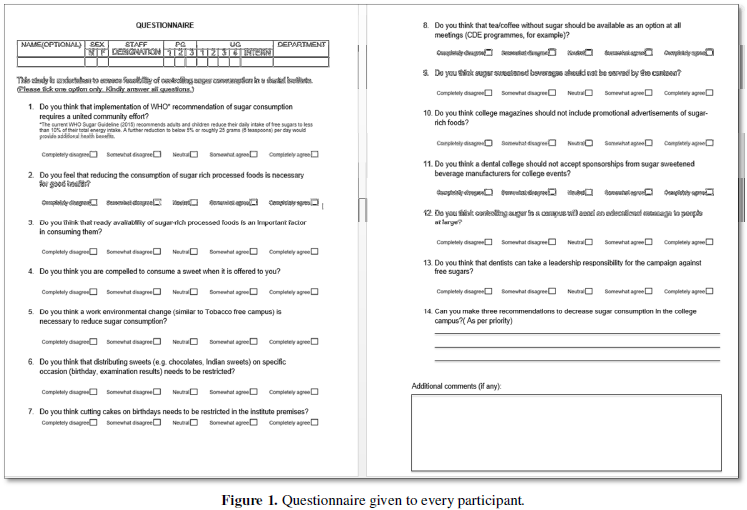 The assessment was done using a 5-point Likert scale ranging from completely disagree (scored as 1) to completely agree (scored as 5). The level of acceptance was measured in terms of total score out of the maximum (65) as a quantitative continuous variable. The questionnaire also included one open ended question “Can you make three recommendations to decrease sugar consumption in the college campus? (Write in the order of preference)” to judge the attitude of the participants qualitatively. The questionnaire also included a section for additional comments which was optional. The modifying factors considered in the study were gender, designation and department to which the participant belonged.

Data obtained were compiled on a MS Office Excel Sheet (2013) and subjected to statistical analysis using Statistical Package for Social Sciences (SPSS v 21.0, IBM). Data were not normally distributed and non-parametric tests were used. For all the statistical tests, significance level of 0.05 was chosen (p<0.05).

The characteristics of the study population in terms of their gender, designation and department are shown in Table 1. Out of the entire study population, seventy five percent were females. There were eleven designations and nine departments. The distribution is shown both in frequencies and percentages.

Comparison of the mean score (out of 65) was done with respect to gender, designation and department using the t-test and f-test. Statistically non-significant difference was seen w. r. t. the gender but significant differences were seen for different designations and departments (Tables 3-7). Highest score was seen with lecturers and lowest was seen with 1st year postgraduates. There was a higher acceptability of this concept with respect to Pediatric Dentistry and Public Health Dentistry departments as compared to the Periodontology and Orthodontics departments. Designation-wise and department-wise, both, we found statistically significant differences in the responses to certain set of questions. Based on the various responses we could summarize the most commonly agreed and disagreed concepts as stated in Table 8. 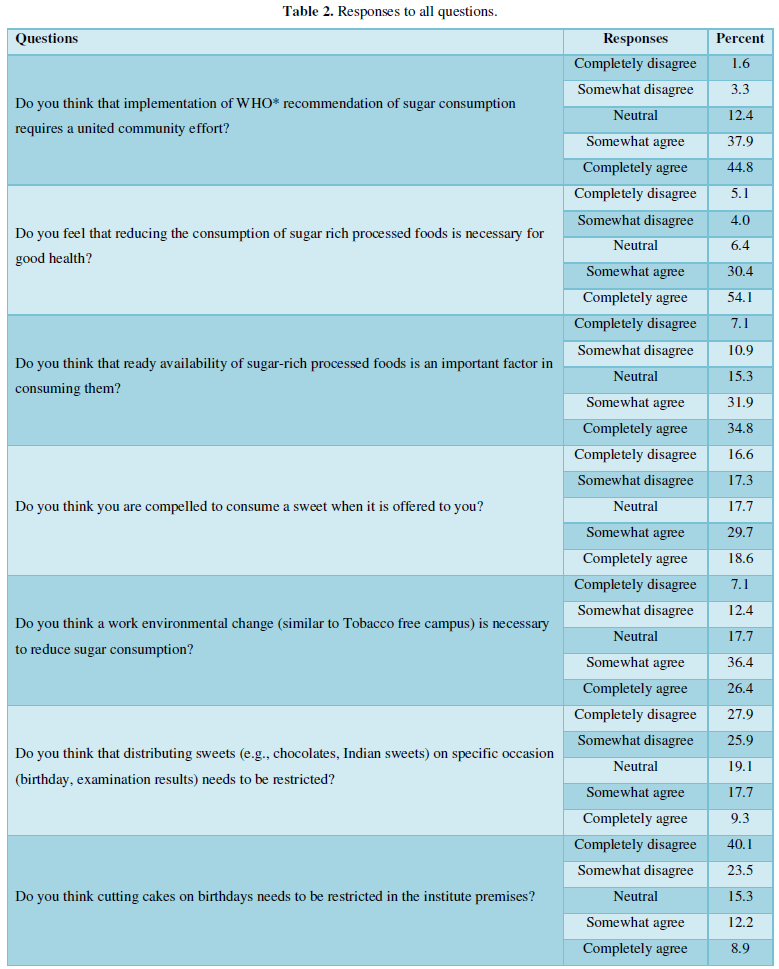 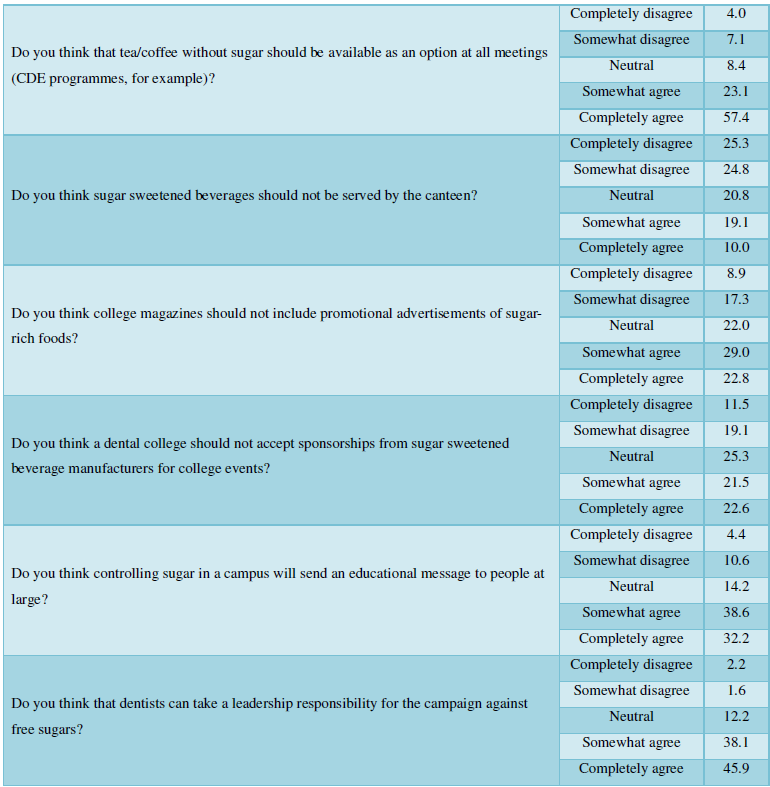 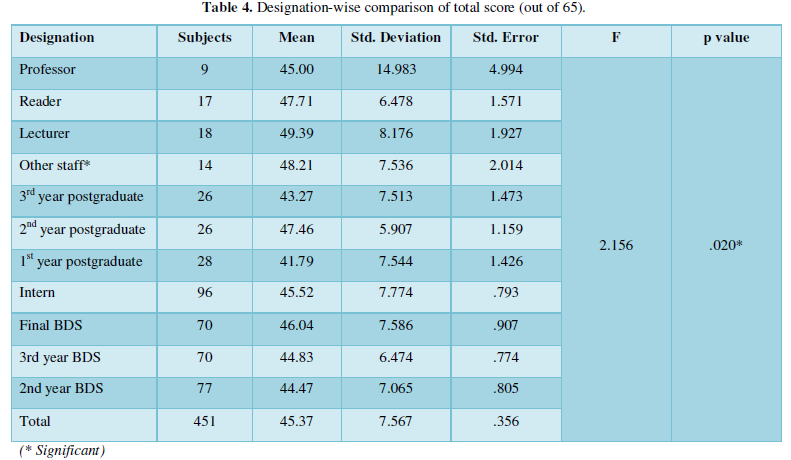 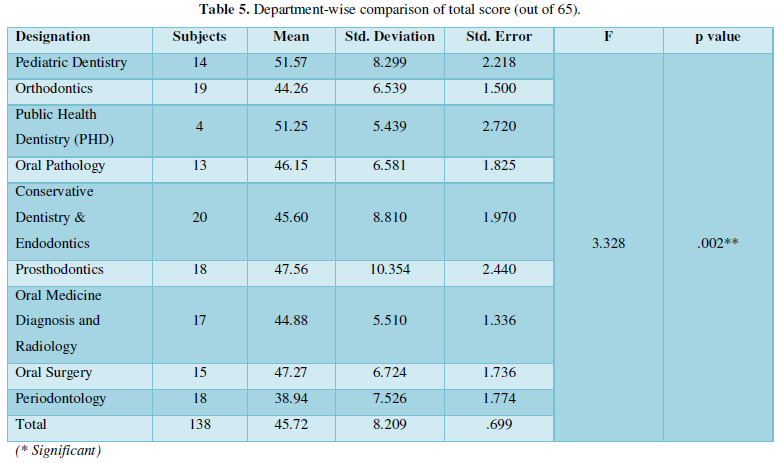 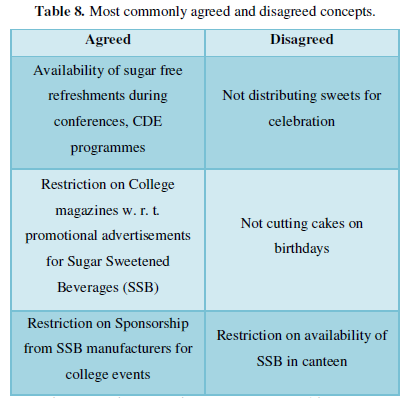 With regards to open ended questions, we came across interesting concepts which were noteworthy. The participants suggested putting up educational posters and conducting educational seminars in the campus regarding the ill-effects of free sugar; celebrating birthdays on a common day and following a “no sugar day” in the campus.

As many as 3.5 billion people are affected by oral diseases globally [8]. Untreated dental caries is the most prevalent health condition globally affecting all age groups and is governed by its chronic progressive and cumulative pattern causing pain, discomfort, economic burden and negative impact on oral health quality of life. [9,10].  Obesity similar to dental caries is largely preventable but has now become a serious health concern of the 21st century. Free sugar consumption, tobacco use, and harmful alcohol consumption, as well as the wider social and commercial determinants of health are the common risk factors of oral conditions and other non-communicable diseases (NCDs) [11].

Over the past 50 years, worldwide sugar consumption has tripled and is expected to grow [12]. Several corporate, social and cultural practices have led to a belief that sugar is a source of harmless pleasure [12,13]. However, enough evidence already exists that free sugar, similar to tobacco, is toxic and contributes to the global burden of NCDs [14]. Amplifying global advocacy on reduction of free sugar consumption is now a mainstream health priority [15]. Dentists advocate healthy dietary practices to their patients. However, in addition to such simple, individualistic and educational approaches, an upstream health promotional approach is the need of the hour.

A dental college can be an ideal model for health behavior change w. r. t. sugar reduction. It is important to understand the attitude of dental staff and students towards free sugar consumption as these individuals are the oral health ambassadors. Since dentists can take a leadership responsibility in a campaign against free sugars, we conducted this research - one of its kinds, in a dental campus to assess the acceptance to “sugar free campus” using a questionnaire.

In our study, we found that staff and students were aware of the ill effects of sugar but that did not translate into readiness for a “sugar free campus”. This could possibly be because the human brain adores the “status quo” [16]. Changing behavior is extremely difficult and having people accepted to radical change is complex [17]. However, we could find a changing trend in some departments. The higher acceptance of Pediatric Dentistry and Public Health Dentistry departments towards this concept could be because these specializations focus more on prevention and health promotion compared to Periodontology, Conservative Dentistry and Endodontics departments, which indulge more in treatment interventions. Overall, greater acceptance to the concept was seen by the teaching staff as compared to postgraduate and undergraduate students. We found that amongst different designations, lecturers had the highest acceptance to the concept which could be attributed to their increased involvement in conducting dental camps (educational), greater interaction with the patients and conducting lectures for undergraduates. The fresh batches of postgraduates and undergraduates had the least acceptance probably because they may lack the understanding of the implications of free sugars on health.

Food industry, through its various marketing strategies, sponsorships of various conferences, etc., has a profound influence on people’s food choices, purchases and consumption patterns [18]. Restriction on sponsorships for college events and advertisements in college magazine could be necessary. By adopting a “sugar free campus” concept, dental schools can influence their patients and visitors to adopt and maintain healthy dietary practices. It is stated that “physicians who practice healthy lifestyle norms are more likely to convince and benefit their patients to follow the same” [19]. Dentists can thus ‘lead by example’ for the reduction of sugar consumption.

OUR STUDY HAS FOLLOWING LIMITATIONS

This being a preliminary investigation a convenient sample from only one institute was chosen. The group sizes were not equal (undergraduates were more in number as compared to staff and postgraduates; and professors were much fewer than lecturers as is seen in any teaching institute). Moreover, the teaching practices, campus restrictions, social and cultural practices, food availability, etc. vary from place to place and thus, this study has limited generalizability. However, this being the first study of its kind, has made important observations and generated important hypotheses to be tested.

A multicentric study with a larger sample can substantiate the claims made by our study. Furthermore, studies assessing the knowledge and behaviors of staff and students of dental schools in addition to the attitude towards the “sugar free campus” concept are necessary. A stepwise implementation of “sugar free campus” will bring in an environmental change that is much necessary for the prevention of NCDs and dental conditions.

The authors declare no conflict of interest. This study was self-funded.
Download PDF View PDF