Mini-Review
Emerging Trends of Herbal Use in Periodontology

Gingivitis is a common mild form of periodontal disease with chronic periodontitis contributing a major cause of tooth loss in adult population. The bacteria associated with periodontitis are predominantly gram-negative anaerobes but may include A. actinomycetemcomitans, P. gingivalis, P. intermedia, B. forsythus, C. rectus, E. nodatum, P. micros, S. intermedius and  Treponema sp. The continuous presence of these bacteria leads to destruction of periodontal tissues and the teeth resulting in pain in the teeth and gums. Various medicinal plants and herbs  have been used to treat tooth problems. Among others being used were galangal, turmeric, anis seeds and in a study on Paperomia pellucida which is known to be responsible as antibacterial, antioxidant and anti-inflammatory have not been identified and tested. The mechanism of action of the active ingredient of PP on the periodontal microorganisms may shade light into its therapeutic effects and potential usefulness.

Chronic periodontitis, a common disease of microbial origin, is a major cause of tooth loss in adult humans [1]. This resulted in the lack of microbial control and imbalance between microbiota and the host, resulting in transient episodes of tissue destruction and cumulative damage [2]. In the last 30-40 years, a vast amount of evidence has been published to suggest that bacteria are  the primary etiological agents of periodontal diseases. The bacteria associated are predominantly gram-negative anaerobic bacteria and may include A. actinomycetemcomitans, P. gingivalis, P. intermedia, B. forsythus, C. rectus, E. nodatum, P. micros, S. intermedius and Treponema sp. The continuous presence of bacteria at the epithelium junction results in a progressive inflammatory process leading to the destruction of the gingival connective tissue and subsequently of the alveolar bone, periodontal ligament (PDL), and cementum on the root surface [3-5].

Medicinal plants have played a dominant and extensive role in the discovery of less expensive, more potent, and reliable drugs against diseases. Home remedies for toothache included in many studies were galangal, [6] turmeric (curcumin) [7] garlic and ginger that can inhibit dental biofilm formation and, olive and olive derivatives products being the traditional medicine for neurological disorders, oral cavity problems and many other health conditions [8,9].

A critical review paper by Safiahhdam [10] in 2018 reported the efficacy and safety of several medicinal plants for gingivitis; however, some plants do not have enough evidence due to the few number of clinical trials. Some of the plants named in the study were pomegranate, aloe, green tea and miswak [10]. On periodontitis, anise seed (black seed) extract was found to have potential antimicrobial activity against S. Aureus, E. coli, and A. Actininomycetemcomitant and when formulated into a gel might be used in patients with periodontal disease [11].

In an Indonesian study, the prevalence of herbal medicine use prevalence was found to be high at 68%. The plants were used as self-medication (40%) and 102 species belonging to 43 families were reported. The usage was significantly associated with the area of residence, age, education level and occupation but was not correlated to gender or health insurance possession [12].

In a general German population, the prevalence rates of herbal medicine use were found to be   high. Self-medication appeared as a common practice and they do not inform their physician about it, rated the knowledge on herbal medicine as poor and use internet as frequent source of information [13]. Self-medication study in Malaysia reported use of salt, hot water, ice pack and herbs (64%) for dental pain, and herbal intake taken was not reported in more detail [14]. Furthermore, among 130 species of medicinal plants reported in literature, 70.7% were obtained from the wild, 9.2% from home garden, with herbs contributed to 30%. This study demonstrated the importance of traditional medicine usage for toothache. They suggested that future phytochemical and pharmaceutical study should be given due consideration to produce natural drugs that could be effective for toothache [15].

Paperomia pellucida (PP) (Figure 1) is native to tropical North and South America and is abundantly available in Malaysia. PP is also known locally as ‘sirih cina’, ‘ketumpangan air’ or ‘tumpang angin’. The plant flourishes in moist and shady areas and can grow up to height of 15 to 45 cm. It is characterized by its smooth, fleshy, and heart-shaped leaves, succulent stems, shallow roots, and minute flowers, which eventually grow into numerous tiny seeds attaching on the cord-like spikes. PP known to be underexploited, has been widely used for different medicinal purposes and has been used traditionally for a variety of ailments including conjunctivitis, convulsions, fatigue, fever, headache, gout, rheumatic pains, skin diseases, to lower blood cholesterol level and breast cancer [16]. Its properties and benefit have been further affirmed by a few research reports. PP demonstrated dose-dependent analgesic and anti- inflammatory actions by interfering with prostaglandin synthesis [17-19]. The high amount of total ash (31.22%) in PP suggested a high-value of mineral composition comprising potassium, calcium, and iron as the main elements, thus inferring that PP would serve as a good source of protein and energy as well as micronutrients in the form of a leafy vegetable for human consumption.

A critical review paper reported that PP bioactivities such as antimicrobial, cytotoxic, antioxidant, antidiabetic and anti-hypercholesterolemia have been described in several literature sources. Nonetheless, most reports only provide the phytochemical screening of extracts, which does not allow the identification of the active compounds. From these studies, some reported constituents are not included in the Dictionary of Natural Products (DNP), which  raises questions towards their identification. In addition, some biological assays were even performed without standard controls for comparison which also made these results questionable [20-24]. These activities induced by the plant’s many types of chemical compounds, including Patuloside A, Dillapiolle, and Pachypophyllin. In a paper by Cui in 2020 reported lignans widely being produced by plant species including peperomia group, and lignans possess diverse pharmacological properties inclusive of anti-dengue and anti-viral to initiate interest for development of vaccine for chronic diseases [25]. 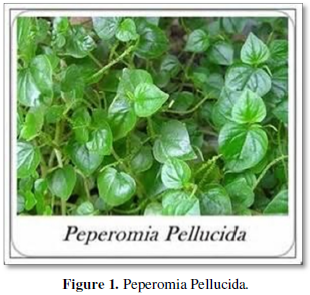 Given the information above and since there has been few studies on PP and none on the use for herbal medication for periodontal diseases, our study to elucidate the mechanism and functions of PP on periodontal microorganisms may shed light on the potential use of PP in the management of periodontal disease. The activity of the active compounds of PP which is responsible as antibacterial, antioxidant and anti-inflammatory in  this herb have not been identified and tested. The mechanism of action of the active ingredient    of PP on the periodontal microorganisms may shade light into its therapeutic effects and potential usefulness.