Case Report
Diagnostic Dilemma for Impacted Central Incisor: Role of CBCT Revisited
Impaction of permanent central incisor by supernumerary is common entity encountered during dental practice. When confronted with this problem, the practitioner should determine the precise location of both supernumerary and impacted incisor. Whenever possible a highly precise diagnostic technique should be used in such situations which help in formulating required treatment plan. This article describes a rare case of miniature supernumerary associated with an impacted permanent maxillary central incisor along with role of imaging, surgical and orthodontic technique in its management.
Keywords: Impacted central incisor, Miniature supernumerary tooth, Radiographic, Surgical, Orthodontic intervention
INTRODUCTION

Impacted tooth is a disorder of dental eruption which fails to erupt into dental arch within expected developmental time. The primary etiological factors for tooth impaction include abnormal germ position, obstruction in the path of eruption, trauma sequalae and ankylosis etc. Impacted permanent central incisor is often faced entity by the pediatric dentist in the clinical practice. The prevalence of impacted central incisor ranges from 0.06 to 0.2% [1]. Impacted permanent central incisor is usually associated with supernumerary tooth.

Supernumerary tooth is a disorder of odontogenesis that is formed from excessive proliferation of tooth germ for any given region of dental arch [2]. The prevalence of supernumerary teeth estimated from 0.1% to 3.8% in permanent dentition [3]. These are usually located in maxillary incisor region (64.3%) [4]. Supernumerary teeth are commonly impacted (88.7%) and found in palatal area [5]. Presence of supernumerary teeth cause various complications like interfere with normal eruption and position of the adjacent teeth which include diastema, displacement, impaction and malocclusion [6]. Also, they may cause formation of cysts with significant bone destruction and root resorption of the adjacent tooth [7]. When any of the above complication present, then surgical removal is required.

The specific alarming signs that may alert the clinician to the presence of supernumerary tooth in the premaxillary region include persistence of deciduous tooth, absence or ectopic eruption of permanent tooth, a wide interincisive diastema, swelling in the buccal or palatal area, rotation of erupted permanent tooth [8].

The present article describes the case report regarding the role of CBCT in diagnosis along with complete management of impacted supernumerary tooth, which impeded the eruption of the maxillary right central incisor.

A 13-year-old female patient reported with the chief complaint of unerupted maxillary right central incisor. According to the medical history, the patient was physically healthy with no systemic disorder and hereditary pattern of hyperdontia and had no history of dental trauma.

Prior to the surgical phase, maxillary left central incisor, both lateral incisors and canine were bonded with brackets and banding of both permanent first molars was completed.

Under local anesthesia, a mucoperiosteal flap was raised on the buccal side. After exposing middle third of the central incisor, the supernumerary tooth was located and surgically removed. Then under isolation lingual button was bonded to the buccal surface of the incisor and secured with the slightly twisted ligature wire (Figure 3). After it, the flap was repositioned and closed with the 3-0 silk suture (Figure 4), which was removed after 1 week. The ligature wire was tied to the adjacent teeth bracket. The supernumerary tooth of 6 mm dimensions was present mesio-palatal to the maxillary right central incisor (Figure 5). Then after 1-week 17x25 ss wire with open coil spring was placed in maxillary arch (Figure 6).

The patient was recalled twice at 15 days interval for changing of coil spring and tightening of the ligature wire by slight twisting, thus avoiding application of strong force that could cause damage to periodontium and root resorption. After 1-month desired space for the right central incisor was obtained. But, the tightening of ligature was continued for 3 months unless the tooth was visible in oral cavity. Then, the lingual button was replaced by bracket to continue further alignment. After desired   extrusion of incisor with ligature wire, it was replaced by overlay wire (Figure 7). Finally, the tooth was engaged in the main arch wire which resulted in its complete alignment. The appliance was deboned after a duration of 9 months and a fixed retainer was bonded on the palatal surface of the maxillary incisor for retention. During follow ups, the patient showed acceptable esthetic and functional results (Figure 8).

The dental eruption depends on interaction between genetic and environmental factors. Alteration in such interaction may results in formation of supernumerary tooth or absence of permanent tooth [9]. 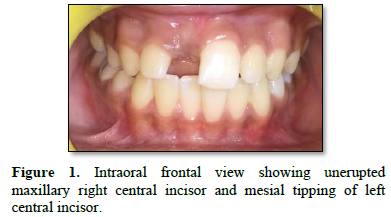 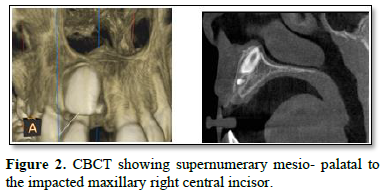 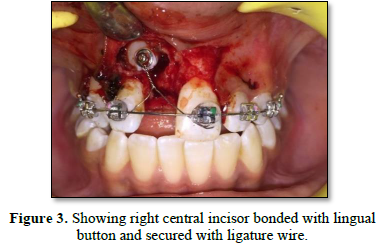 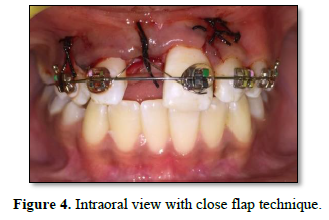 Supernumerary tooth can be located in any region of the dental arch and can be single or multiple, erupted or unerupted, unilateral or bilateral [10]. Single supernumerary tooth is most common in the anterior maxilla, often 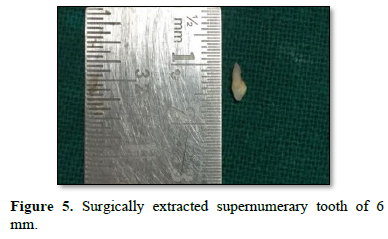 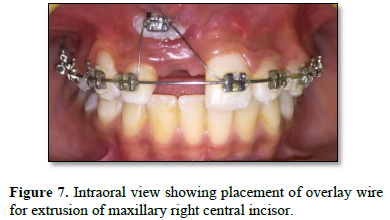 associated with unerupted or malaligned incisors. Various etiological hypothesis is postulated like hyperactivity of
dental lamina, spontaneous gene mutation, dichotomy or environmental factors [11], but the prime causative factor is unknown.

Impaction of permanent incisor due to well-formed supernumerary tooth is a common entity encountered during clinical practice. Various management options are available for such situations:
The patient age and the amount of available space are the two crucial criteria in determining the spontaneous eruption of the permanent tooth after extraction of supernumerary.

In our case the supernumerary tooth was of 6 mm only which remained undiagnosed with conventional radiography i.e., IOPA, OPG and occlusal view and could only be located by CBCT. It was present mesio-palatal to the impacted maxillary right central incisor. After recognition, immediate extraction of supernumerary and orthodontic extrusion of permanent incisor was planned as it has lost self-eruptive potential. Orthodontic extrusion was performed by bonding lingual button on the labial surface of impacted permanent maxillary right central incisor. For such extrusion some authors suggested bonding at lingual surface to prevent the bone reduction [13]. No bone reduction was observed in the present case, rather the tooth maintained a favorable bone support throughout treatment. Chawla [14] suggested that selection of the surface may be decided on individual basis, in cases where the attachment causes trauma to the labial mucosa, lingual placement should be preferred.

For aligning of the impacted tooth, closed- eruption technique was used in present case. In this a flap with attached gingival tissue is raised and repositioned in its original position after the placement of traction devices. This method is usually opted when the tooth is impacted in the middle of the alveolus or high in the vestibule near the nasal floor as it accounts for better aesthetic results [15]. Vermete [16] stated that closed-eruption technique, imitate natural tooth eruption and produce the best aesthetic and periodontal status.

While aligning the impacted tooth light traction forces should be applied for providing good gingival position and contour. The extrusion force greater than 50 gm may cause post-alignment non-vitality of the tooth. In current case, force less than 50 gm was used for extrusion of the tooth.

In literature, impaction of incisor by well-formed supernumerary is commonly discussed. But, impaction by a miniature supernumerary (6 mm) is not yet documented. In such situations, radiographic diagnosis plays a very crucial role. In our case, conventional radiographic techniques failed to locate the supernumerary tooth and the miniature supernumerary could only be identified with the use of advanced imaging technique i.e., CBCT. Based on conventional radiographic findings decision of wait and watch or gingival incision is usually taken, which not only results in wrong treatment plan but also prolongs the treatment duration with psychological trauma to the patient. CBCT imaging provides many unique features over conventional radiographic imaging like greater clinical imaging efficiency, anatomic accuracy and 3D visualization of image. So, CBCT can play a very crucial role in accurate and timely diagnosis for such cases to minimize future complications.