Mini-Review
Review Article on When Bragging, Be Modest: The Art of Humblebragging
Humblebragging is a mechanism through which individuals aim to subtly and implicitly boast about their achievements in a manner deemed to be socially acceptable. The boast is coated in layers of false humility, disgust, innocence or self-deprecation which ultimately changes the nature of boast from being explicit to being implicit. Humblebragging is a result of the contemporary rise in virtual worlds and social media platforms which drive people to strike a balance between social affiliation and the need to brag about their achievements. Given the tricky nature of humblebragging, individuals always engage in a trade-off necessary to protect their virtual identities while satisfying their biological and psychological needs in the process.
Keywords: Humblebragging, False humility, Implicit boast, Virtual media, Social media platforms
INTRODUCTION

Humblebragging is a recent phenomenon that was first identified in the year 2010 by Harris Wittels, in the behavior exhibited by movie stars and celebrities on the virtual platform of Twitter. He defined humblebragging as “A specific type of brag that masks the boasting part of a statement in a faux-humble guise. The false humility allows the offender to boast about their ‘achievements’ without any sense of shame and guilt. Humblebrags are usually self-deprecating in nature, but there are a few exceptions” [1]. A humblebrag can thus be understood as a mechanism used to boast about one’s achievements in an implicit manner, by disguising the boast in veils of humility or disgust, intended to reduce the direct impact or appreciation of the content as being boastful in nature [2].

This field of study is relatively new. Thus, in order to understand the possible causal factors and the subsequent rise of humblebragging, it is necessary to explore the reasons for bragging. Bragging or boasting is the parent phenomenon which has resulted in humblebragging over time. The behavior of boasting is reinforced by biological and psychological satisfaction experienced by an individual [3]. It activates the dopamine reward pathway along with satisfying one’s needs for power and affiliation [4]. With the passage of time, our society has witnessed a change in the nature of social relationships and social identity. Virtual interactions have replaced face-to-face interactions and the need to maintain one’s virtual identity has emerged strongly [5-7]. In the era of digitization and virtual worlds, one’s virtual identity forms a dominant part of one’s identity and individuals engage in different mechanisms to protect it [8]. They cannot afford to blatantly boast about their achievements, despite its benefits, if they aim to protect their virtual identities and continue being a part of virtual groups. This shift requires a new mechanism that balances the needs of boasting and the demands of virtual social affiliation, ultimately leading to the birth and rise of humblebragging, a phenomenon that aims to strike a balance between the two (Figure 1). 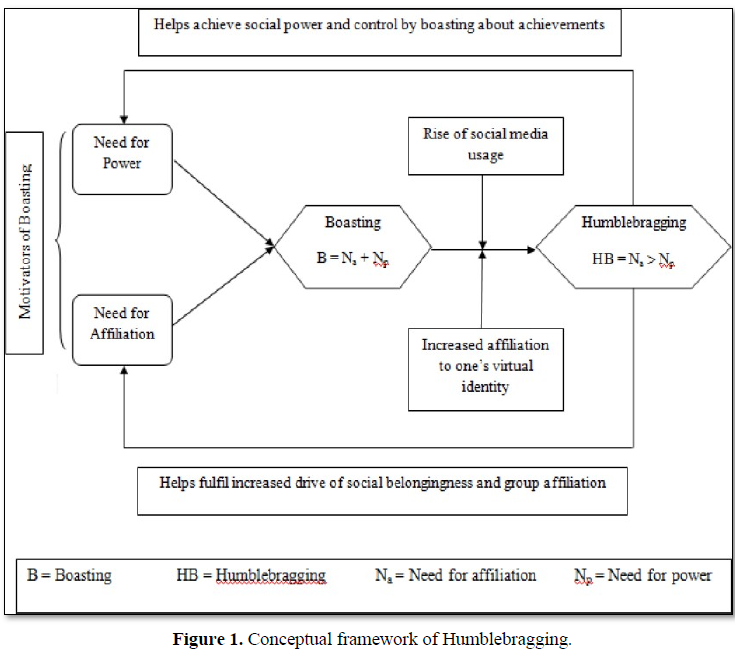 While humblebragging allows one to indirectly and implicitly boast about their achievements [9,10] many of its receivers find this mechanism to be outrageous. Individuals have often indicated that exposure to a humblebrag makes them furious, as they feel deceived and ridiculed. They believe that people’s attempts to mask a boast in a false light of humility is insulting, as they are trying to deceive them by creating a false humble impression [11]. Thus, they prefer explicit boasts to implicit humblebrags. This seems to be a reasonable demand, but it threatens the virtual identity and social affiliation of the bragger. [12] Thus, individuals are always in a battle to sustain the mechanism of humblebragging, striking a trade-off between the pros and cons of humblebragging and its relative use and validity in a particular social situation (Figure 2).

Humblebragging is a phenomenon that is largely evident on virtual platforms. It is an attempt to boast about one’s achievements implicitly, by masking the boast in humility, disgust or self-deprecating statements. It allows individuals to balance their needs of power and affiliation on one hand and the demands of virtual identity management on the other.

Individuals sustain the mechanism of humblebragging by exploring the demands of that social situation, the need satisfaction of that individual and the possible resistance to humblebragging by its receivers. Thus, its sustenance is a very tricky phenomenon of finding the right kind of balance in order to secure one’s virtual identity. As this is a relatively new field of study, work in this area is in its nascent stage. Future research can aim to explore determining factors of humblebragging in terms of constitutional components (personality traits) or social determinants (social factors). It can also aim to explore the occurrence of humblebragging in face-to-face conversations and its differing characteristics, if any. It is necessary to explore the field of humblebragging as it provides insight into the changing trends of the society and its impact on one’s social identity and social perception. This understanding will allow us to draw relevant conclusions about one self-based on current understanding of social and personal forces at play. 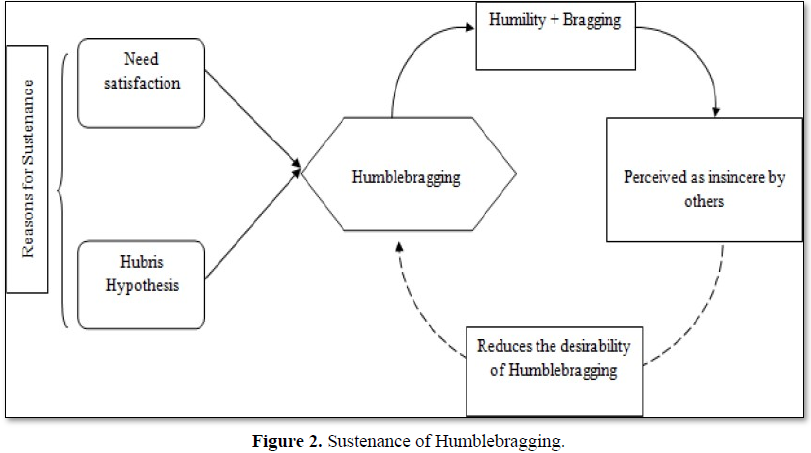